US 5G networks, while heavily promoted by the big three mobile operators, are only slightly faster than 4G, and in some cases 5G is now slower than last year . The lack of adequate spectrum explains this situation, which will begin to be resolved as of next year, when the band C licenses auctioned last March can be used and complemented by the 3.45 GHz license that is being auctioned now .

It is well known that the transmission speed of a 5G mobile signal makes very little sense if it is not accompanied by a wide coverage. It is useless, for example, that speeds close to gigabit per second can be achieved if there is only coverage in very few streets in the commercial areas of large cities. And, vice versa, that there is a great coverage of the 5G signal but at a speed close to 50 megabits per second, similar to 4G, which is what happens when low frequencies are used, of 700 or 800 MHz.

As paradoxical as it may be, this is, broadly speaking, what is happening in the United States, although T-Mobile, AT&T and Verizon, the three large national operators with 4G and 5G licenses, are competing vigorously to win the favor of their customers for that use their 5G networks. And the main commercial hook is to heavily subsidize the purchase of a brand new Apple iPhone 13, at a price below the stores that sell it free or with a high monthly contract, although later it will not be used this year or the smartphone runs slower than with connection to the 4G network.

The struggle for 5G customers is very intense in the United States, without the three operators being able to offer a high speed or great coverage until the frequencies of the C band auctioned in January are released

The Washington Post newspaper published on September 25 an article that was the result of numerous measurements that two reporters had made a few weeks before and the comparison with similar ones a year before in neighborhoods of New York and San Francisco, which a priori had to be better than the US average. The conclusion of the two reporters was that 5G networks were, in general, “faster than the usual 4G service, but not always by much.”

Much more precise and extensive measurements made by the consultancy Opensignal coincide with the fact that the average download speeds achieved with a 5G smartphone are not very different from those achieved with a 4G network. An Opensignal report comparing the 5G experience in 50 states and 250 cities in the United States subtly highlights, so as not to offend its customers, the operators, that “despite the fact that 5G is present in some form in all the sites [of United States], the quality of the 5G experience varies significantly. ”

The Opensignal report includes several graphs of coverage and average speed of transmission of 5G signals in different territories, which are not bad if compared internationally but both parameters are not crossed, which, in the end, is what matters. As an example, in a global report also from September by the same consulting firm, the US operator T-Mobile appears as the global winner in terms of the availability of 5G networks, 35.7%, but in terms of transmission speed or appears in the list. Vodafone’s 5G Spanish network, which is not listed in terms of coverage, deserves a very prominent position worldwide in Opensignal’s list, with an average speed of 246.5 megabits per second (the leader in speed, the Taiwanese FarEastTone, it almost doubles that of the Spanish one, but even so it is very commendable, if the degree of Vodafone coverage in Spain is ignored).

The Washington Post article includes a graph, based on data from the consulting firms IHS and RootMetrics, which compares the average download speeds achieved by the three major operators in the country in 2020 and 2021. Taking into account that these are average values ​​and there are To treat them with great caution given the strong variation existing in the United States as a whole, it can be observed that the average 5G speed has increased in 2021 compared to 2020 (except for Verizon, although it achieves an average 5G speed in 2021 that is between the AT&T and T-Mobile), albeit marginally, and barely reaches 50 megabits per second, a speed that in Europe is achieved with any 4G network. 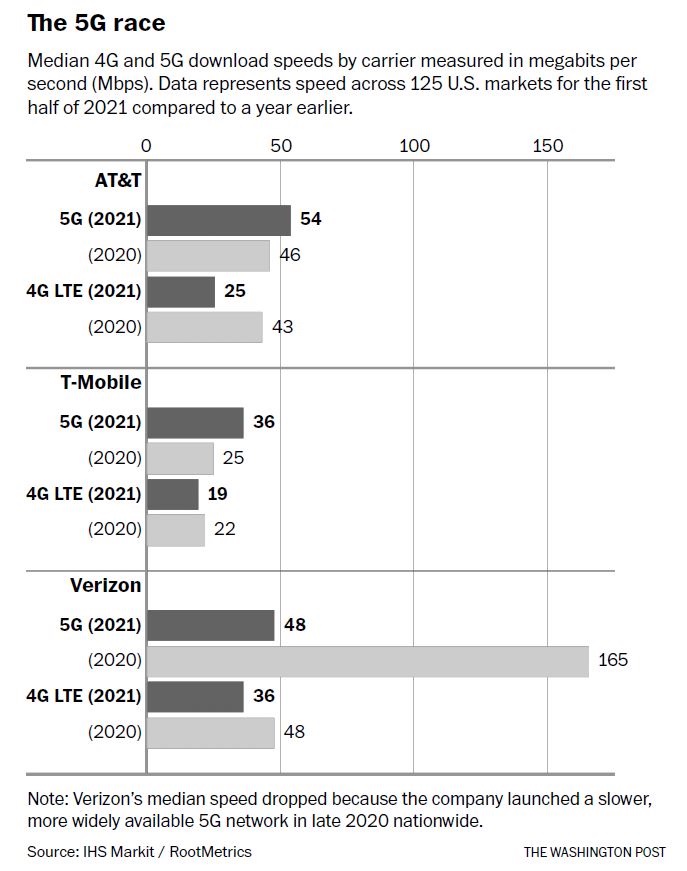 The other data that emerges from the graph is that 4G networks have dropped in average speed in the three operators, which go from having a decent average download speed in 2020 in the case of AT&T and Verizon (around 45 megabits per second) and quite reduced in 2021, from 19 megabits per second for T-Mobile, 25 for AT&T and 36 for Verizon. In all three cases, if you look at the average values, it pays to hire a 5G network in relation to 4G (as long as you are in an area with enough coverage). 4G speed has dropped this year compared to 2020 because, on the one hand, 4G resources are used for 5G (with DSS shared spectrum technology) and, possibly, for 5G to stand out more than 4G.

The problem for the three operators in the United States is that, until the end of the year, the licenses of the C band (between 3.7 and 4.2 MHz) auctioned last March, at a record price of $ 81.2 billion, plus the amount to be paid to satellite companies to relocate them, since they had perpetual rights of use. Precisely, on October 5, the 100 MHz auction began in the medium band from 3.45 to 3.55 GHz, the ideal for 5G.

This middle band can be used, however, with certain limitations, because it is partially occupied for military purposes. Each operator, in addition, can purchase a maximum of 40 MHz in this auction and in 10 MHz blocks, with which it will be seen in a few days if the operators are willing to bid hard, as they did with the C band and which were heavily indebted. The FCC, the US regulatory body, also plans to hold another auction in the 2.45 GHz band, with no date announced.

The lack of spectrum in the mid-band is no longer a problem in the United States, but the auctioned C-band licenses will not be operational until the end of the year, when the now-occupied satellite signals are released. The same happened in Spain with the 700 MHz frequency, which was occupied by DTT and with the pandemic the auction had to be delayed until a couple of months ago, delaying the entire calendar.

It will be from 2023, with the investments in infrastructure made and the full use of the licenses of the 3.5 GHz medium frequencies, when the United States will have a powerful 5G network nationwide

However, there is currently a very intense struggle in the United States between the three operators to get 5G customers. Each of them emphasizes their strengths and hides their weaknesses in their advertisements, without the average American knowing very well what to expect because the mobile phone situation in the United States is complex, to use a term currently in vogue. T-Mobile’s bottom ad, published in full page in the New York Times last Tuesday, and repeated in the Wall Street Journal yesterday, illustrates the aggressiveness of US carriers. 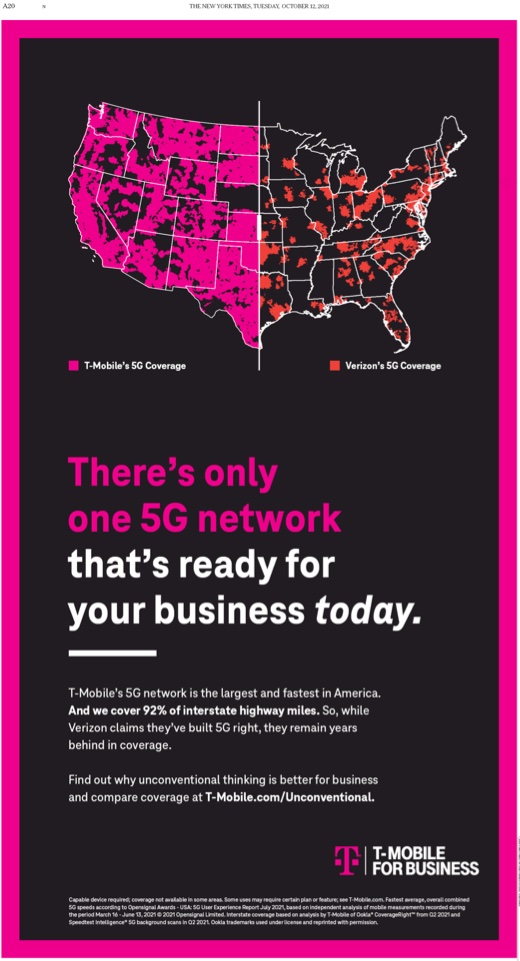 T-Mobile’s advertising is partially true; It has the most extensive 5G network in the United States and has even launched the “real” 5G, the SA 5G that is not connected to 4G, but that “T-Mobile’s 5G network is the fastest in America” it is more than debatable, at least on a general level. With the use of high frequencies, millimeter waves, Verizon networks are much faster, even though they are located in few centers of large cities.

It all depends on the previous situation of 4G networks, the current coverage and speed of 4G and 5G in the immediate area of ​​a specific user and whether it is foreseeable that 5G coverage will improve significantly in one or two years with other operators. With the acquisition of Sprint, T-Mobile achieved a good portfolio of licenses that can be used in large areas of the United States, in the low 700 MHz and medium-low 2.5 GHz bands, which allow it to have a very broad 5G coverage in all of the United States, as highlighted in its advertising. Although the speed with 5G leaves much to be desired, it improves the existing 4G, and especially in some places where there was only 3G.

AT&T has quite a few 5G licenses on the low frequency, but much less than T-Mobile / Sprint. His bet is to invest from next year with the acquired C-band licenses, the ones he already has and the ones he can acquire in the current 3.45 GHz auction. Verizon has been a bit misplaced, because he bet very hard with millimeter wave licenses and are not giving the result initially expected due to their very short radius of action. 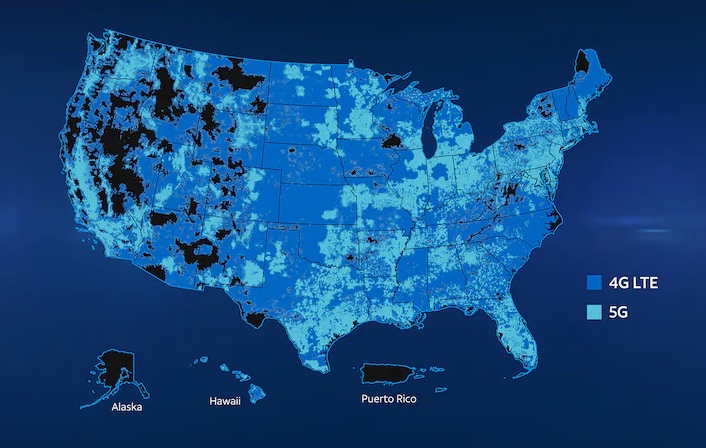 Current coverage of AT&T 4G and 5G networks, in 14,000 locations in the United States.

T-Mobile US therefore still has a considerable lead over AT&T and Verizon with a relatively mediocre 5G offering, but usable in many places. Towards the end of 2022 and, above all, in 2023, the 5G offer may take a considerable turn in the United States, because the three operators will offer “real” 5G signals, with totally 5G networks, including T-Mobile, because it will also cover the high-traffic areas with high-speed networks, thanks to the medium-high band licenses you have acquired.

Until the investments planned by the three US operators (plus the fourth, Dish) do not bear fruit with the launch of the new networks and licenses, 5G will continue to be basically China, about four years ahead of the United States. , an eternity in mobile technology. The United States will have an optimized 5G network in 2023-24 when China will already be rolling out enhanced 5G, officially known as Advanced 5G, although Huawei continues to call it 5.5 G.