During this year 2022, global subscriptions to 5G networks have practically doubled, since they have gone from 544 million to 1,061 million, according to the mobility report (EMR) published by Ericsson last week. The distribution by region, however, remains very uneven: China accounts for 61% of all 5G subscriptions, calculates the Swedish company, slightly less than last year, which was 66% of the world total. Europe has doubled 5G subscriptions this year, from 32 to 63 million, 6% of the world total, but still has less than half that of the United States and Canada, which add up to 141 million.

Ericsson’s calculations are rosy for the future of 5G in Western Europe, because the report calculates that the average annual growth will be 41% for the next six years and will have a total of 490 million 5G subscriptions by the end of 2028, even more than North America, which will have 420 million, as seen in the table below, which appears at the end of the EMR and which breaks down the evolution of mobile subscriptions by region, technology and volume of smartphones.

Ericsson’s mobility report admits many readings, but it highlights above all the explosive growth that 5G networks will have in the next six years, to the detriment of other mobile technologies, which will plummet, including 4G. This is because the average annual growth over the next six years of mobile phone subscriptions will increase extremely low, between zero and 2%, according to Ericsson’s forecasts.

For these forecasts to add up six years from now (the enormous increase in 5G and the stagnation of global mobile phone subscriptions), two very plausible trends will have to take place: the virtual disappearance of 2G and 3G technologies in 2028, mostly replaced by 4G, and a general decline in 4G technology in the coming years, which will be gradually replaced by 5G. By the end of 2028, 5 billion mobile subscriptions will be 5G and almost another 4 billion will be 4G, out of a total of 9.2 billion, slightly more than the world population by then.

In the next six years, there will be a significant increase in mobile subscriptions in Asia (380 million) but the average annual growth will be low, approximately 1.5%. Throughout Europe, the average annual increase will be almost zero, from 1,120 to 1,130 million between the end of 2022 and the end of 2028. In America it will be somewhat higher than Asia, 2%, since it will go from 1,110 million at the end of this year to 1,250 million at the end of 2028, due to migration and the fact that many Americans still do not have a mobile phone. In North and East Africa, the increase will be similar to that of America, 2%, while in Sub-Saharan Africa it will be double, 4%, with 210 million more subscriptions, the current number being very low.

Another noteworthy fact from these global subscription tables is that highly industrialized countries and regions (Western Europe, the United States and Canada, and Japan and South Korea) will continue to have about 1 billion mobile subscriptions, but the vast majority will become 5G. in these next six years. The annual growth of 5G in Western Europe until the end of 2028 will be 41%, if Ericsson’s forecasts are met, with 490 million 5G subscriptions. In North America, the increase will also be notable, 20%, with 420 million 5G subscriptions, as seen in the table above.

China is already a world power in 5G 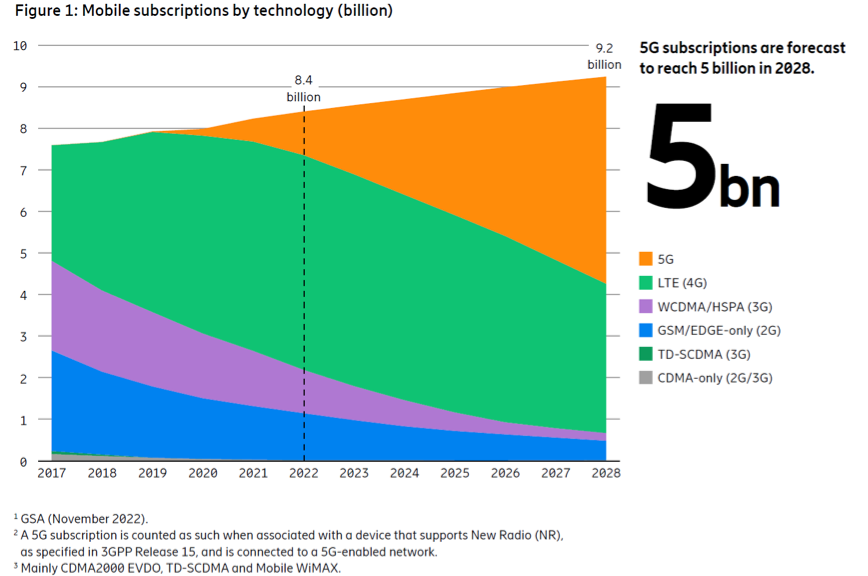 China, as usual since 5G technology began to take off in mid-2019, is a world power in absolute and relative numbers in 5G subscriptions. Ericsson counts a 5G subscription when it is associated with a device that supports New Radio (NR), as specified in 3GPP Release 15, and is connected to a mobile network that supports 5G, as indicated in the footer of the graph above. As has been said, China accounts for 61% of the total global 5G subscriptions, a slightly lower percentage than last year, which was 66%. This predominance of China will decrease in the coming years, to 28% by the end of 2028, as the rest of the countries install 5G networks and have more subscriptions to this technology.

In the coming years, the great market for 5G networks will no longer be China, because it is already beginning to be saturated with this technology, despite being very recent, but rather developing countries, basically Southeast Asia and India and Latin America. Obviously, highly developed countries such as Western Europe, North America, Japan, South Korea and the countries of the Persian Gulf will have very high growth in 5G networks, of the order of 30% compared to 14% in China, but the annual increase in developing countries will be unusual (Latin America will go from 19 to 400 million 5G subscriptions by the end of 2028 and in Central and Eastern Europe from 4 to 240 million, for example).

The biggest shift in mobile network technology and market from 4G to 5G will be in developing countries, with Asia and Latin America leading the way, while growth in advanced countries will be much slower, for demographic reasons.

The coming trade battle between the big manufacturers of telecommunications equipment (Ericsson, Nokia, Huawei and ZTE, the current leaders, most likely Samsung, the Japanese combination of NTT DoCoMo, NEC and Fujitsu and probably India’s Mahindra) will be very intense. From the outset, it can be assumed that the Chinese market and those of nearby countries will continue to be monopolized by the Chinese manufacturers Huawei and ZTE, while in the United States they will continue to be banned, with the bulk of sales by Ericsson, Nokia and Samsung, which already has set foot

The large European market for 5G networks will be dominated in the coming years by Ericsson and Nokia, but Huawei will continue to sell a lot of 5G equipment, thanks to upgrading its 4G networks installed in recent years to 5G networks with new software. The future of Huawei’s 5G networks in Europe (and especially in Great Britain) will, however, be increasingly precarious, due to strong pressure from the United States. But this could also change soon if the European Union shows itself to be more equidistant between the United States and China, as the president of the European Commission, Ursula von der Leyen, has suggested in recent days, in the face of growing US protectionism.

The great 5G market will no longer be, in the next five years, neither the European nor the American nor the Chinese but the developing countries (although the developed countries will continue to be very important). The European Union has already said that it does not want to engage in a trade war with the United States and sue it before the World Trade Organization for the subsidies it wants to carry out with the deployment of the IRA (Inflation Reduction Act), in the probable event that it goes ahead. . What Brussels foresees is also to grant subsidies to its European companies to counteract the protectionism of the United States. China is also expected to continue with its traditional protectionist policy.

It is clear that telecommunications networks are a very small part of world trade, but they are highly strategic, to the point that most studies consider them key to the development of any country. This makes the struggle between trading blocks for strategic and market control of 5G networks essential. Obviously, what would be desirable would be for there to be an understanding between the competing trading blocks and the different suppliers for a faster and more harmonious development of 5G networks, but it is unlikely that this will be the case in the short term.

At the end of November, the three big Chinese public and government-controlled telephone operators (China Mobile, China Telecom and China Unicom) declared that the number of customers with “5G package” was, at the end of October, 1.03 billion. . Having a 5G package means, for these operators, that the customer has a subscription to a 5G network but does not necessarily use it or have a 5G smartphone. For Ericsson, the total number of Chinese 5G subscribers at the end of this year (according to the definition that has been mentioned) is 644 million, a third less.

Be that as it may, in China most of the 5G networks do not depend on 4G (they are SA 5G) and Huawei and ZTE are making great progress to install them according to the new intermediate generation 5G, the 5G Advanced, and the future Release 18, next to be concluded. China is also advanced in the deployment of 5G private networks and on-demand services (network slicing). Meanwhile, European operators are concerned about increasing their profitability, which will allow them to better finance future investments in 5G networks, and even their 5G networks are NSA, that is, they are supported by 4G and are not autonomous.

The evolution of subscriptions to 5G networks shown in the Ericsson mobility report poses numerous challenges, both for Europe and for other regions of the world, and at all levels of a technological and market nature. During the eleven years that this report has been published, the data it provides and the six-year forecasts have been very consistent. They do not necessarily have to be met to the letter in the coming years, but it is not foreseeable that they will go far away at a level in large numbers. The question, especially for the future of Europe, is whether it will be able to continue to maintain its high technological level in terms of telecommunications as in the past, now that it seems clear that European networks will be a minority within the world as a whole.