The global smartphone market will grow 13% this year in turnover and 7% in units, according to the forecasts of the consultancy Strategy Analytics, based on the excellent results achieved this first quarter, especially in China. If these data are confirmed, 1.4 million smartphones would be sold in 2021, a figure very similar to that registered in 2019 and the crisis generated last year by the pandemic would be parked. Still, many factors can derail this big-figure analysis, especially the current shortage of components and the fact that only a third of this year has been completed.

The consulting firm Strategy Analytics estimates that during the first quarter of 2021 a total of 340 million smartphones have been dispatched worldwide, 24% more than in the same period of the previous year, in round numbers. In China, a total of 94 million units were shipped, with a growth of 34%, estimates the consultancy. It should be taken into account that most of the stores were closed and the production of smartphones was very depressed in the first quarter of 2020, because the pandemic was in China at its peak in this period, which partly justifies the high growth of the first quarter of this year.

The evolution of the global smartphone market during this second quarter will give a more precise idea of ​​the expected behavior throughout 2021. However, the data that will be released at the beginning of summer will not allow the result to be extrapolated for the year as a whole, due to the fact that the Smartphones, and especially 5G, consume a large amount of semiconductors in their manufacture and it is expected that there will be a great shortage of components at least for the remainder of the year and that the supply and demand of chips will not normalize until well into 2022, as the main chip manufacturers have warned in recent weeks.

The average sale price of smartphones will rise 6% in 2021, reaching $ 294, and it is also expected that high-end smartphones, with a price of more than $ 600, represent slightly more than half of the market

The consulting firm estimates that in 2021 just over 1.4 million units will be sold, with a 7% growth compared to the previous year, when 1.33 million units were narrowly exceeded. This would make the number of smartphones sold in 2021 be in the same order as that of 2019 and 2018 and reverse the downward trend of the last three years. 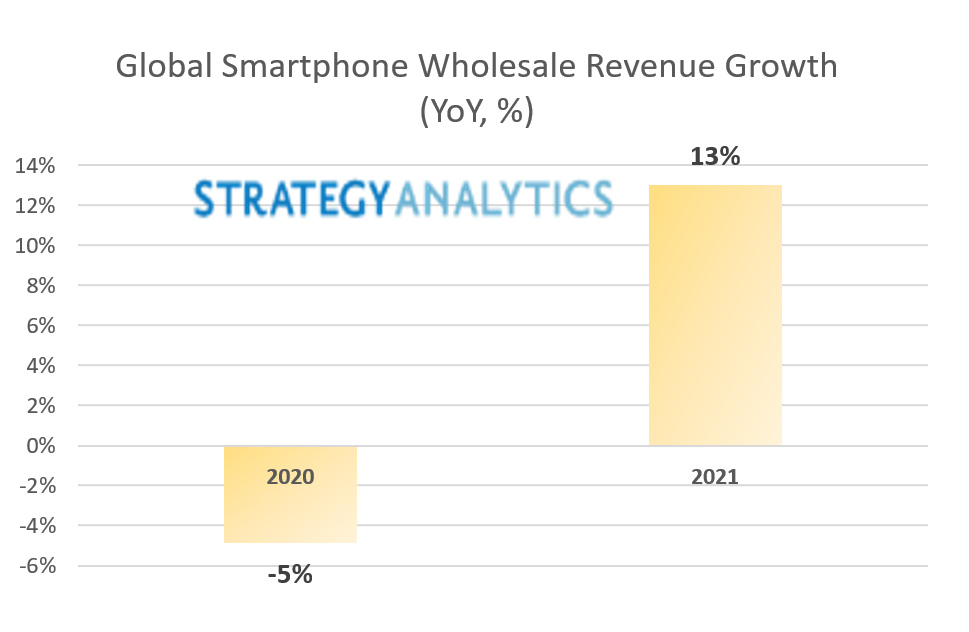 More important for manufacturers and for the channel, however, is that the average sale price of smartphones will rise in the order of 6% in 2021, reaching $ 294 on average. In addition, high-end smartphones, with an average price of more than $ 600, will account for just over half the market, according to Linda Sui, senior director at Strategy Analytics. The good reception of Apple’s iPhone 12 since they were launched in the last quarter of 2020, especially in the US market, and the clear migration around the world towards the purchase of 5G smartphones justifies this increase in the average price, also breaking in this case the trend of recent years. The top graph summarizes the consultancy’s forecast for all of 2021.

Smartphone sales estimates published by Strategy Analytics last Monday show a strong growth during the first quarter of this year, of 24%, compared to the same period of 2020. But even more surprising is the high growth of the five main companies, well above the average and that, in the case of the three Chinese companies (Xiaomi, Oppo and Vivo), they range between 68 and 85%, as seen in the graph below.

This great growth of the now five major smartphone manufacturers is at the expense, on the one hand, of the loss of share of the “others”, which have gone from having 39% in the first quarter of 2020 to 24% in the first quarter of last year, with a 23% drop in the quota. But it is due, in turn, that Huawei has passed this last quarter to the category of “others”, due to the collapse of its sales as a result of the US embargo and the prohibition since last September that TSMC manufactured it to order and sell you the basic core of their smartphones and the main source of their competitiveness, the Kirin processors.

If the demand for smartphones continues to be very high, there may be more demand than supply after the summer, apart from the increase in the price of end-user devices, with the current shortage of chips.

In the first quarter of 2020, Huawei sold 49 million smartphones, ranking second after Samsung, which was first with 59.2 million units, and well ahead of Apple, which was third with 39 million. Huawei’s first quarter 2020 figures also include those of its second Honor brand, which was sold at the end of the year to an investment fund with all its assets, presumably to avoid the embargo made on Huawei. For the first quarter of this year, Strategy Analytics does not publish the Huawei figures, although the Telecoms.com site estimates that they must be around 18 million units in the quarter, in principle not counting those of Honor, so that the figure of “ others ”add 82 million units. 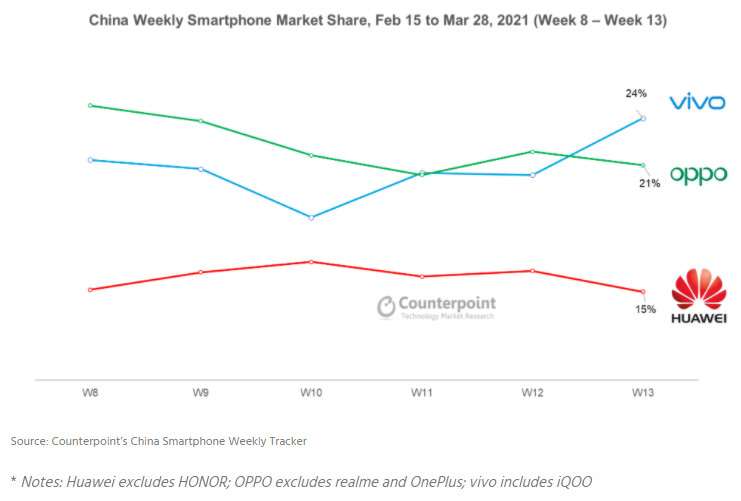 The weekly market shares from mid-February to the end of March published by the consultancy Counterpoint suggest, however, that Huawei’s sales, excluding the Honor brand, remain relatively stable in third position, around 15%, and that Vivo and Oppo maintain a tough fight for the first and second position above Honor. Xiaomi, which is very strong in Europe, occupies the fourth position. The top three Chinese manufacturers share 60% of the market.

In any case, the consulting firm’s data for the first quarter and for the entire year are rounded, which can lead to significant errors of appreciation, because each decimal is 100,000 units. And the thing is that the smartphone market is very high, of the same order of magnitude as the world turnover of semiconductors; both range from $ 400 billion to $ 450 billion, underscoring their importance and mutual dependence. Between 1.3 and 1.4 million smartphones are sold each year, while the sum of personal computers and laptops does not reach a quarter of this figure, despite the increase in recent months.

Evolution of the smartphone market, from 2017 to 2020, in millions of units. Source: Strategy Analytics. (taken from telecoms.com)

The most notable thing, however, is the strong growth of the main Chinese manufacturers, especially lately with Huawei’s problems in sourcing key components. In the first half of 2020, practically all smartphone manufacturers fell in sales (with the exception of Xiaomi in the first quarter) and in the second half they all achieved strong growth, except Huawei (and Apple in the third quarter, which was waiting to introduce the iPhone 12, and Samsung in the fourth, largely due to the strong growth of the iPhone).

Xiaomi has had a very notable presence outside of China for some time, especially in Europe, and Oppo is also making a dent in the European market. The main harmed by this pressure from Chinese manufacturers is Samsung, which previously dominated the European market, as well as its domestic market, and Apple’s sales are also suffering, but to a lesser extent because it started from a smaller share than Samsung . Huawei’s forced vacuum means that the fight is not critical, as does the expansion of sales in the different markets and the increase in the average price of smartphones.

Apple is very strong in the United States, as is Samsung, while Chinese manufacturers have little presence in the North American market. It remains to be seen what will happen in the coming months with Apple’s sales in China, a market that is key due to its size but may be a victim of Chinese nationalism, if the United States becomes more aggressive with its policy towards China.

In any case, the most notable note in recent quarters is the strong boost in smartphones compatible with 5G networks, which have boosted sales and raised the average price of devices, generally in all markets. In the United States, in addition, the big three operators are doing a great promotion of 5G smartphones, especially the iPhone 12 and the different 5G models from Samsung. Two days ago, Apple introduced improvements to its tablets and computers, as well as some new accessories, but not to smartphones. An update to the iPhone 12’s operating system, iOS 14.5, is planned for next week, however, which may help keep sales up.

The current shortage of semiconductors, as pointed out at the beginning, may severely affect smartphone sales in the coming months, and especially 5G smartphones. A typical 5G smartphone, for example, has three antennas, while a 4G smartphone has only one antenna. A 5G smartphone needs 30 to 50% more passive components (resistors, capacitors, inductances) than an equivalent 4G model, the industrialists cite.

A 5G smartphone also consumes much more energy than an equivalent 4G, especially if it is connected to a 5G network. To minimize unnecessary power consumption, a 5G smartphone can carry six or more microcontrollers compared to one or two of a 4G, a chip that is very cheap but widely used in all electronic devices. The very low profit margin for manufacturers, coupled with the billions of microcontrollers consumed each year, results in a shortage of this humble and ubiquitous component.

Prices for all chips, if they can be supplied, are skyrocketing prices and increasing lead times by several weeks at best. The large smartphone manufacturers, in anticipation, have hoarded many stocks in recent months and are placing higher orders than necessary, which is also causing shortages in key sectors of activity, such as cars and computers.

The crisis for the smartphone manufacturers sector may come after the summer, when demand is strongest in anticipation of Christmas sales. If this spring and summer demand continues to be very high, it is foreseeable that there will be a shortage of product at the end of the year and growth forecasts will not be met. For now, what will happen first is that the sale prices of smartphones will increase, to the despair of consumers. Hence, an increase in both sales and turnover and average price is expected.