The semiconductor shortage is far worse than was anticipated a few months ago. First it was said that it would be resolved at the end of this year, then that it would last until 2022 and now there is talk that the situation will not normalize until 2024. At the moment, it does not seem that the supply of mobile networks will be greatly affected, but the production of smartphones. More serious, however, is the deterioration of the global supply chain and the escalation of the trade conflict between the United States and China, with Taiwan at stake, with consequences for now unforeseeable.

The semiconductor shortage that affects much of the manufacturing industries, from cars and appliances to servers and smartphones, will clearly not ease until the middle of next year in the best of cases, due to the total breakdown of the global logistics chain and the hoarding and excess orders of semiconductors that are being made by many companies, while others have had to stop part of the production, such as several car manufacturers.

The increased demand for some products, such as 5G smartphones, which require many more chips than 4G mobiles, only exacerbates the overall problem. The causes of the current chip shortages in many industries are now well known, once they have occurred, and the remedy is very difficult to solve, at least in the short term. The only thing that can be done is that the companies that demand chips are reasonable and do not order more than is strictly necessary and that the chip manufacturers ask for proof of the urgency of the orders, to try to prioritize them.

Taiwanese TSMC will manufacture 84% of the world’s most advanced chips this year, up from less than 30% in 2016, according to VLSI Research, and in 2020, 62% of TSMC’s turnover came from US-based companies. United

Those who have it worse are the car manufacturers because the chips they order are usually made to measure, even for each car model in some cases, and their benefits are defined several years in advance. In addition, the car manufacturer orders the chips from a component manufacturer, some of which are manufactured by another company or by several, without the person placing the order necessarily having knowledge of it.

The lengthening of the chain of specialized suppliers, together with the shortening of supply times and the drastic reduction in stocks that has been generalized throughout the manufacturing industry, means that there is no room for maneuver in the event of an unforeseen event. Generally, the habitual circulatory collapses do not have a particularly serious cause but are the result of several fortuitous circumstances that occur in places with a lot of traffic and that produce monumental chaos.

In the case of chips, it is a supply chain with many links and that to complete it takes at least three months, from the moment the order is placed until it is delivered, in the best of cases and under normal circumstances, without any serious unforeseen and with a regular demand in time. It is clear that the pandemic has disrupted all manufacturing and demand plans for many months of a type of product that, previously, had been monopolized by Huawei and many other companies in anticipation of the embargo announced by the United States Government.

One third of the chips, on request

The pandemic or the embargo have not been the only causes of the current situation of shortage of chips in multiple sectors of activity, although they have contributed decisively to it. The global logistics of semiconductor supply has already been very stressed for years, with cutting costs and delivery times as a top priority. It must be borne in mind that there are many chip designers who do not have their own factory but rather commission their production to third parties. In 2020, a third of the chips were designed by companies that do not have a factory, the historical maximum, as indicated by the following two graphs from last April from the consultancy IC Insights. 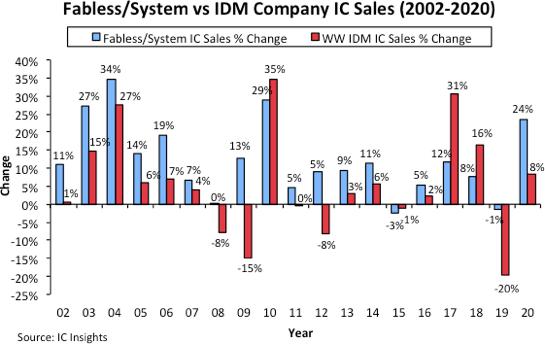 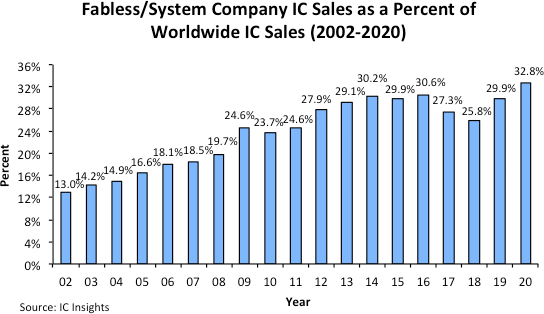 The graph above shows that the percentage of integrated circuit sales of chip design companies without a factory (fabless) relative to companies that had integrated chip design and production (IDM) has increased over the years. Only in 2010, and marginally in 2015, sales of fabless grew slightly less than those of integrated. The result is the continued growth in the last twenty years of chip designs that do not have a factory behind them but rather commission their production to third parties. While in the middle of the last decade 30% of the designs were carried out by fabless, in 2020 the proportion rose to the all-time high of 33%, after a few years of decline.

In 2020, thanks to the increase in the turnover of Qualcomm in 5,000 million dollars (one of the large companies without a chip factory), the growth of the sales of the fabless was 24% compared to 8% of those that had a factory, reaching the figure of 32.8%. IC Insights foresees, based on this historical evolution, that in the next five years the percentage will be around and remain at 35%. It is also possible to think that fabless design very complex chips, so their role in the semiconductor market is paramount. Another key factor is that a single company, Taiwan’s TSMC, expects to make 84% of the world’s most advanced chips this year, up from less than 30% in 2016, according to VLSI Research. 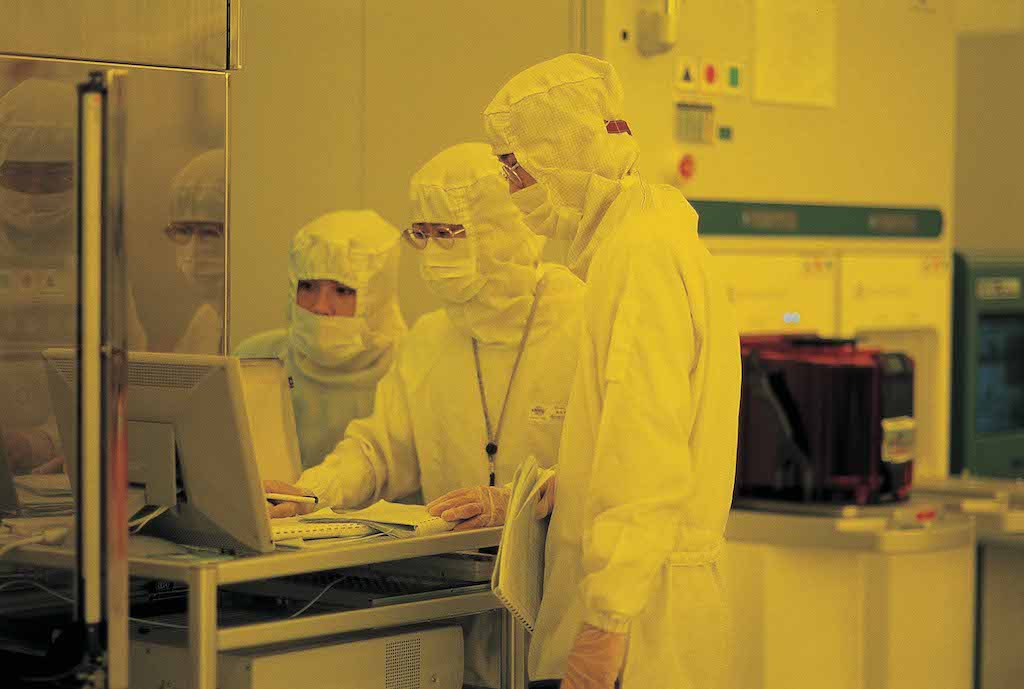 Precisely, these last manufacturers are specialized in car chips, which they have not been able to complete because TSMC cannot cope. Some analysts suspect that TSMC has preferred to supply to US companies, because their orders have more profit margin, than to specialists in automotive components, although it is also true that automakers canceled many orders with the pandemic and the fall of car sales and only resumed them at the end of last year. In any case, what is clear is that car manufacturers do not have the chips they need.

The shortage of chips is understood to other sectors

Over the months, the shortage of chips, which since the end of last year mainly affected car manufacturers (although it was also the most visible part, with the closure of production lines in Europe, the United States and Japan) it has spread to many other sectors. Last week, in the presentation of quarterly results, the CEO of Apple, Tim Cook, warned that his company will have many problems with the supply of chips (much of the core of its iPhone and the new processor of its Mac are manufactured by TSMC , directly or through Qualcomm).

The CEO of Qualcomm, Cristiano Amon, wanted to remove iron from the issue and assured that the situation would begin to be normalized towards the end of the year (it is not known if in general or for its products ordered from TSMC). In contrast, Ericsson CEO Börje Ekholm said that the supply of link networks was not affected by the shortage of chips. It should be borne in mind that just over a million link networks are supplied annually around the world, compared to the more than 1,300 million smartphones that are expected to be supplied this year.

The large number of smartphones that have been sold around the world for years, and increasingly powerful and with more chips, is the main cause of the buoyant semiconductor market. The counterpart is that, when there is a fall in the smartphone market, as happened in 2018 and 2019, the entire industry suffers. But it is a sudden stop in the first quarter of last year, because of the pandemic, it turned the entire market upside down and now the consequences are being seen.

The United States, Europe and Japan, obviously apart from China, have proposed to be as self-sufficient as possible in the manufacture of semiconductors, which would lead, if carried out, to a colossal overproduction

Being self-sufficient in semiconductors is not easily achieved, as is being seen in China. Even if the United States used all the economic, human and research resources necessary to be the maximum self-sufficient in chips, no chips would come out for five or at least three years. In addition, as Europe and Japan want it (Taiwan and South Korea already are and supply half the world) the danger is to cause an excess of chip production worldwide and an alarming drop in profitability in the manufacture of chips. And if China achieves even a small part of its goal of being highly self-sufficient in chips by 2025, global excess production could be colossal.

This week, the influential weekly The Economist designates Taiwan as “the most dangerous place on Earth” in a comprehensive report. He quotes experts who assure that the “strategic ambiguity” that the United States and China have maintained for seventy years about the future of Taiwan is about to be broken, with the danger that a war between the two superpowers will break out in the near future, around 2027 , which would be from all points of view a world catastrophe. And for an initial cause seemingly as trivial as tiny chips. 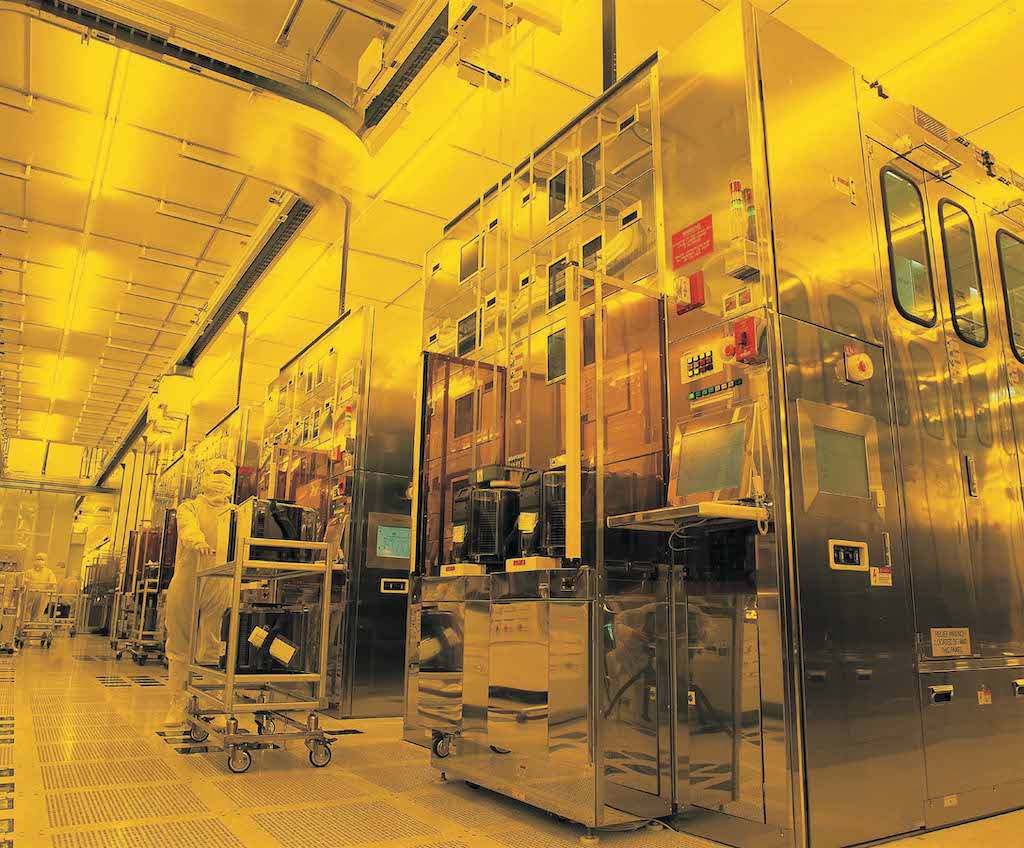 Pat Gelsinger, the new CEO of Intel, has proposed to build a semiconductor manufacturing complex in Europe, preferably in Germany, with two fabs and an investment of the order of 20,000 million dollars, in a whirlwind visit he made at the end of the last week to meet with the Community Commissioners Margrethe Vestager and Thierry Breton and with the German Minister of Economy, Peter Altmaiere and give several interviews, such as Politico and Handelsblatt.

The condition is that Intel receives a strong community subsidy, of the order of 40% of the cost of construction of the factories, as Gelsinger assures that the governments of Taiwan and South Korea do: 8,000 million dollars in subsidies, therefore. The complex, says Intel, would be able to make five-, three- and two-nanometer chips for the rest of this decade, with the company’s most advanced technology, and for Europe to reduce its dependence on chips from Asia.

In addition, Intel wants the European Commission to forget its goal of “manufacturing in Europe at least 20% of the world’s production in value of next-generation semiconductors and in a sustainable way” through a global alliance, as proposed Thierry Breton introducing the plan for the European digital decade in mid-March. Breton was thinking of an alliance between TSMC, Samsung and Intel to achieve this European sovereignty in semiconductors. Apparently TSMC and Samsung have scrapped the community plan. Intel would remain, but its demands are very high.

European semiconductor manufacturers have already made it known that building such an advanced factory would not be useful for their interests, because they are focused on designing and producing medium integration technology chips, in the 10-15 nanometer range, because it is more suitable for power circuits, such as those that are put in cars. In his opinion, the demand in Europe for the latest generation semiconductors is very low and a factory of these characteristics in Europe would not have enough orders to achieve the necessary full occupancy.

The European Commission is due to present its project for a European alliance on semiconductors tomorrow Wednesday. Perhaps the situation of chip production in Europe will become a bit clearer towards the end of this decade. At the moment, however, the most burning problem is how to meet the peremptory demand for chips in Europe and in the world in the coming months, even in the next few years.