The sale of smartphones, which had started very well during the first half of 2021 when recovering from the ravages of the pandemic, has ultimately been weighed down in the global calculation of the year, due to the poor figures for the fourth quarter, especially in Europe. The consultancy firm Strategy Analytics estimates that 1,346 million smartphones were sold throughout 2021, while for Counterpoint 1,391 million units were placed in the channel. In both cases, the global figure for 2021 represents only a very slight growth compared to those achieved in 2020, in which smartphones shipped fell 10% worldwide due to the rise of the pandemic.

The relative stagnation of smartphones shipped worldwide throughout 2021 has been caused, in large part, by the shortage of components for smartphones that existed after last summer. The situation, however, is more complex and can be analyzed in more detail when all the consultants have published their final data and not only the units sold but also the total turnover or, what is the same, the average sale price are valued. and its segmentation by world regions.

The smartphone market has been stagnant for years, with a downward trend, but it worsened with the arrival of the pandemic in 2020. Now it has been seen that it will continue in the coming years, because the arrival of 5G smartphones has not done more than lessen and delay the decline of a highly saturated world market with highly efficient terminals, with little room for improvement.

The sale of smartphones in 2021 has been around 1,350 million units, with a very slight growth compared to 2020, due to component supply problems that have worsened in the fourth quarter

The following two graphs show the evolution of smartphone sales, by years and by quarters. 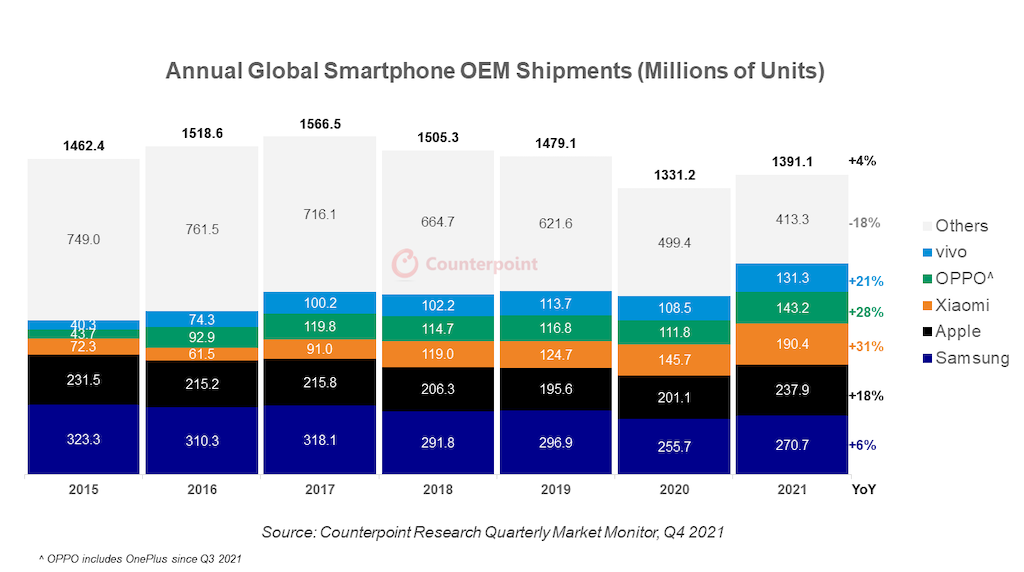 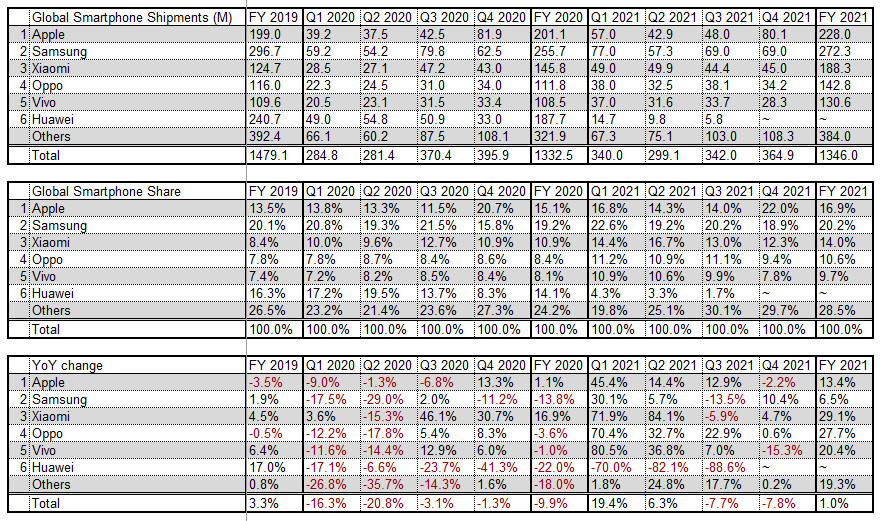 The smartphone market is increasingly polarized. Traditionally, two manufacturers, Samsung and Apple, monopolized around 35% of the total market, the first with the highest number of units sold and the second with the highest turnover, thanks to the higher average sales price of its iPhones.

The virtual disappearance in the last two years, at least for now, of Huawei’s smartphones and its former subsidiary brand, Honor, has caused the other Chinese manufacturers (Xiaomi, Oppo and Vivo) to monopolize about another 35%. of the total, without Samsung and Apple taking excessive advantage of Huawei’s fall. What they have achieved, mainly, is to retain the high-end market, which Huawei had partially taken from them.

All the rest of the smartphone manufacturers have had to distribute in the last two years (with Huawei and Honor included) approximately 30% of the units that were not monopolized by the five big brands and sell at a lower average price, which has caused that famous brands at the time, such as LG, have finally had to leave, and others, such as Sony, barely count.

By 2022, it is expected that there will be a growth of the order of 3% worldwide and it would be a success to reach 1,400 million units, despite being below the sales of 2019; what is certain is that most models will be 5G

Meanwhile, large manufacturers of computers and tablets, such as Lenovo and its subsidiary Motorola, also have to fight for an extremely competitive market, including Honor, now decoupled from Huawei. And also Huawei, which seems not to give up the war, although the sanctions of the United States of not letting TSMC sell it chips or Google leaving its application platform, have caused serious commercial damage.

The fourth quarter, which is typically by far the best of each year, with an average of 400 million smartphones shipped, even in the fourth quarter of 2020, this year has been a relative disaster, with just 370 million units (365 million for Strategy Analytics), 6% less than in the same quarter of the previous year.

All manufacturers, with the notable exceptions of Samsung, which has grown 8% in units in the period and Xiaomi 5%, have reduced their sales. The worst part has been taken by the manufacturers that are not leaders, with a loss of 18%, and also Vivo among the big ones. Apple, although sales of the iPhone in units have dropped by 1%, has nevertheless managed to significantly increase profits. 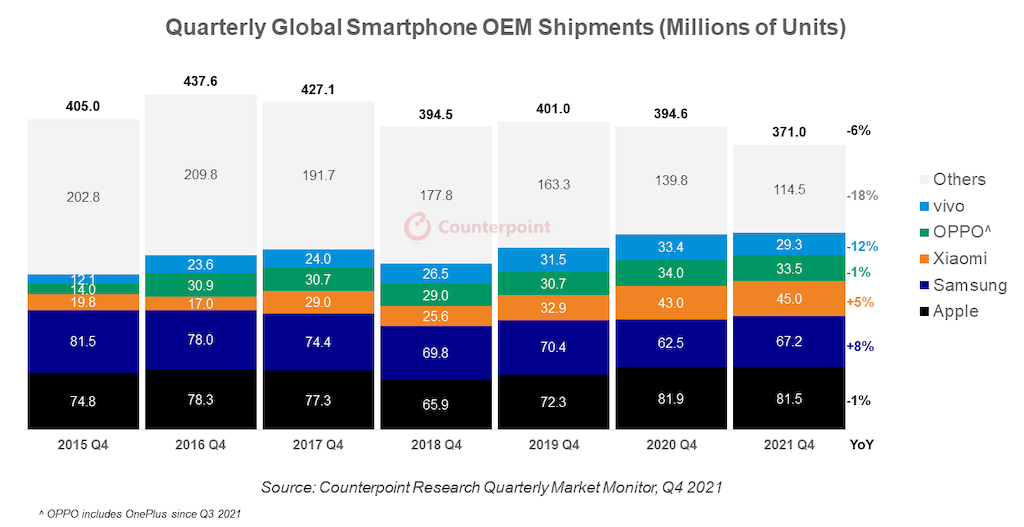 Smartphone sales figures in China for the whole of 2021 have been much more positive than in the rest of the markets. A total of 266 million 5G smartphones were shipped in China last year, an increase of 63.5% over 2020, according to an official report by the China Academy of Information and Communications Technology (CAICT).

According to CAICT, the three large national and state operators (China Mobile, China Telecom and China Unicom) have 1.6 billion subscribers, of which 497 million may be connected to a 5G network, because they have a compatible smartphone. In 2020, this figure was 298 million subscribers to 5G networks. Last year, the total number of smartphones shipped, which was 350.7 million, grew 13.9% compared to 2020. In December alone, smartphone sales grew 25.6%, to 33.4 million units.

Chinese local brands, notably Xiaomi, Oppo and Vivo, sold 86.6% of all smartphones, 303.6 million units. Apple with its iPhone has a relatively small share, close to 10%, but the high volume of the Chinese market makes it one of its main sources of profit, despite the fact that iPhones are prohibitively expensive for the average Chinese consumer. Local brands, says CAICT, placed 438 new smartphone models on the market, 90.7% of all models introduced.

As in many other fields, the importance of China for the mobile phone market is fundamental. According to the American consulting firm IDC, in a report from last December, China is the main world market for 5G smartphones, with 46.9% of the total. It is followed, at a considerable distance, by the United States with 16.1%, and Asia Pacific and Japan with 12.8%. This high share of the current Chinese 5G market is expected to fall to 30.5% in 2025, as 5G networks and services grow in other regions of the world.

Strategy Analytics forecasts that this year 2022 the sale of smartphones will grow around 3%, which would reach 1,385 million units, approximately the same as in 2019, Linda Sui calculates. During the first half of this year, the main problems that have plagued the smartphone market, such as the shortage of components, price increases due to this shortage and the general increase in inflation and costs of transport and raw materials, as well as the uncertainty that weighs on the evolution of the pandemic, is expected to continue. It would be, in any case, during the second half of this year when the situation could return to normal and instill greater optimism in the market.

Two factors explain this continued drop in smartphone sales in the Chinese market: on the one hand, the shortage of components means that Chinese manufacturers cannot flood stores with their products and, on the other, the Chinese market is beginning to be saturated and consumers are taking more and more time to change terminals. As if that were not enough, in addition, the designs of the different manufacturers’ terminals are increasingly similar.

All these factors, however, are not particular to China, but also in many other markets, such as Europe. What happens is that China has a very large and very dynamic market, especially in smartphones, and the general trends are much more noticeable in China than in other markets. In addition, the Chinese 5G market is unmatched by the rest of the world, with many more networks and coverage.

This meant that, already in 2019, Chinese manufacturers accelerated the commercialization of 5G smartphones at a very affordable price despite the novelty, in order to quickly renew the fleet of 4G models. The pandemic caused the prices of 5G models to drop more than desirable in 2020, due to lower demand. And in 2021 they have encountered rising costs and supply issues without buoyant demand, precipitating very weak fourth-quarter sales, especially for Chinese manufacturers (Samsung barely counts in China, his great Achilles heel).

In the fourth quarter of last year, Apple was in fourth position, a short distance behind but behind Huawei, Vivo and Oppo, with Xiaomi hot on its heels. Instead, in this fourth quarter Apple surpassed them all, with a 23% share, followed by Vivo, Oppo, Honor and Xiaomi. Huawei, although it has practically disappeared from Europe, still retains a 7% share of the Chinese market (which with 15% of Honor, its former second brand, has a combined share of 22%, not far from Apple).

Huawei has just presented the P50 in Europe, a high-end smartphone but 4G and without Google services, and it is also very active in models with a folding screen. It is doubtful that Huawei will regain its notoriety in Europe this year but not so much in the extremely competitive Chinese market. Throughout 2022, the route of Huawei smartphones in China will be seen, with its own operating system but with Qualcomm and Mediatek processors. 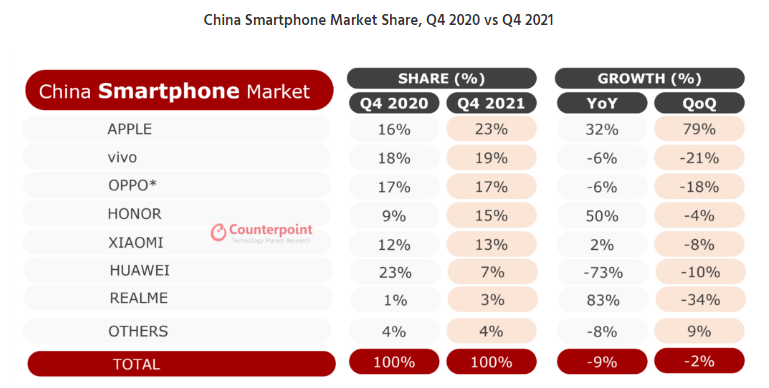 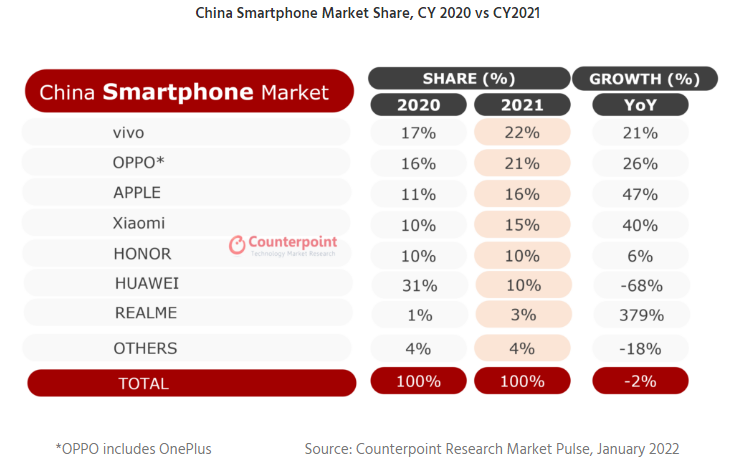 In annual calculation, Apple remains third in the Chinese market, with a 16% share, but with much higher growth than the rest, 47%. In 2021, Xiaomi, which in China has a less prominent position than in Europe, has improved positions thanks to a 40% increase, despite the fact that the market is led by Vivo, with 22%, and by Oppo, with 21%. (In Oppo the OnePlus brand is included).

Apple’s considerable advance in China has benefited from the component supply problems that Chinese smartphone manufacturers have had. Although its chief executive officer, Tim Cook, warned in early December that his company could have component supply problems with the iPhone, which could mean a loss of 6,000 million dollars due to higher costs, in the end they have not been so important as expected, as he acknowledged in the presentation of the results last week, with record profits and billing.

Apple has also counted on significant subsidies from US operators for the iPhone 13 in 2021, which promote 5G at all costs, although coverage is minimal for now in the United States. The situation is also very complex in Europe, because consumers are not particularly attracted to changing their terminal for a 5G model, even if they have a very affordable price. All this means that the evolution of smartphone sales is largely unknown, both in terms of the number of units sold and their average price. If 1.4 billion units were reached in 2022, it would already be a success.