SA 5G networks (Stand-Alone or real 5G, without dependence on 4G) are still in the testing phase by the vast majority of operators and it will take at least a year for them to take off on a large scale in Europe. In China and South Korea, the development of SA 5G seems more advanced than in Europe and the United States, although it is difficult to specify its real situation, especially in the Chinese market. The reason for this delay, most analysts agree, is that the task is much more arduous than originally thought, more than three years ago, and a very wide coverage of 5G networks is required throughout the territory to notice its benefits.

Some operators have already introduced 5G specifications in the core of their network (5G Core) and in mobile networks that work exclusively with 5G, what is known as Stand Alone 5G (SA 5G), as opposed to the much more common Non-Stand Alone 5G (NSA 5G), which are 5G but governed and supported by 4G. But it is a minority and in a very limited territorial way.

Many major operators, such as Vodafone in Germany and the Netherlands, Korea Telecom or T-Mobile US, the US subsidiary of Deutsche Telekom, plan to roll out “real 5G”, as SA 5G is also known, by the end of next year or already. in 2024. Many others are simply in a more or less advanced testing phase and have not specified an introduction date, as is the case with the operators present in Spain. Telefónica does the bulk of its SA 5G tests on its network in Germany.

There are six key issues that need to be fully resolved before introducing 5G SA on a large scale, such as having cloud-native infrastructure, 5G core, and good 5G coverage, all of which are major challenges.

The main reason why SA 5G is being delayed much longer than expected at the end of 2019 is that the migration from NSA to SA 5G is a very difficult and complicated process, with many challenges to solve that are also interrelated. among themselves and require close coordination of network equipment and software providers, operators and different departments of these companies.

There are six key issues that must be very well resolved before introducing SA 5G on a large scale, says Gabriel Brown, principal analyst at Heavy Reading, associated with the consultancy Informa, in an interesting article from a couple of months ago. Must have cloud-native infrastructure, 5G core rollout, good 5G coverage on all or most backhaul networks, aggregation of more than two carriers and spectrum redistribution, as well as broad availability of 5G terminals and a differentiated service from current 4G or NSA 5G. Each and every one of these issues is important and requires time and investment to verify its proper functioning, adds Brown.

The first difficulty is having what is known in the industry as “native cloud”. More than just virtualizing networks (having servers manage them remotely), operators want to make full use of containers, thin services, and other cloud-hosted technologies that the Internet has to offer. Many carriers have virtual core networks, but few have native clouds, Brown says. And without them, there is a risk that the essential automation of the network (given its increasing complexity) will be less efficient and the new services will not work properly.

With the NSA 5G, the new 5G radio systems are coupled to the core of the 4G network, the 4G Core, which is the control center of the network. With SA 5G, all the integration must be carried out with a new 5G Core, in which it is being seen that its implementation entails many challenges. With a native cloud and a fully 5G network core, introducing new services is very easy, which is the big advantage that operators see in having a fully 5G network, apart from supporting more, faster communications. and with lower energy consumption. But this flexibility of operation is only possible with a native cloud and a very well resolved 5G Core.

Operators are concerned about growing security breaches in their current networks, which are feared to increase with SA 5G, and are opening numerous labs to try to stop them.

Having good 5G coverage is equally important. With SA 5G, the option to transmit 4G signals up the network does not exist, so many 3G and 4G communications do not work if there is no 5G coverage. Carrier aggregation is also problematic: having two, one at high frequency and one at low frequency (2CA) works well with NSA 5G, because you can double the capacity of a network. But with SA 5G it may not be enough and it is preferable to have four aggregate carriers (4CA) to optimize the spectrum used and have it well distributed. This in turn requires more capable and integrated components. More time to get them ready and more investment, in short.

Naturally, the terminals must be 5G to be able to use the new advanced services. And these new services must also be clearly differentiated from the current ones, with very interesting features. On-demand services (known as Network Slicing) is a good example, as is the metaverse that is not mere rebranded virtual reality. But it is still far from having terminals that support either on-demand services or the metaverse, in terms of benefits and price. Not to mention, say some, fully 5G IoT devices.

If you want a real qualitative leap and achieve a good experience with SA 5G compared to the current NSA 5G, all these aspects must be optimized. But, as indicated, it is an arduous and very complex task, which are also, to a large extent, interrelated.

This complexity of SA 5G causes, on the one hand, that many pilot tests are required to have guarantees of system operation and, on the other, that it is difficult to move to the massive deployment phase, despite the fact that many operators are making great efforts, supported by their traditional equipment suppliers.

Last April, Vodafone’s German subsidiary reported that it had connected its network to SA 5G technology with its provider Ericsson and the Finnish operator Elisa had also made its first SA 5G connection with Ericsson. But the customers of the French operator Orange will have to wait until 2023, supposedly at the end, to have SA 5G commercial service, which in fact is one of the few in Europe that has set a date, so that in the end it may be one of the first to do so. Gabriel Brown acknowledges that the industry-wide plans for SA 5G are well behind schedule.

Even so, in recent weeks, both Nokia and Ericsson have communicated progress in the implementation of the 5G Core and the SA 5G network with part of their clients. TIM, the Italian operator, has chosen Ericsson to install the 5G Core, which will allow the Italian operator to modernize its current “Evolved Packed core” and introduce a new 5G SA in a single cloud-native solution, as claimed Ericsson in a statement from a few days ago. With this, TIM will achieve higher data transmission speeds, ultra-low latency and orchestration and automation services, adds the Swedish equipment manufacturer.

Ericsson has also just published a report on the work it is doing on Vodafone’s SA 5G network in Germany, with the graph below recalling the great benefits that SA 5G networks bring, as well as another report on what it is making the Swedish manufacturer with the Swiss operator Swisscom, one of its clients that have opted for the new 5G technology the earliest. 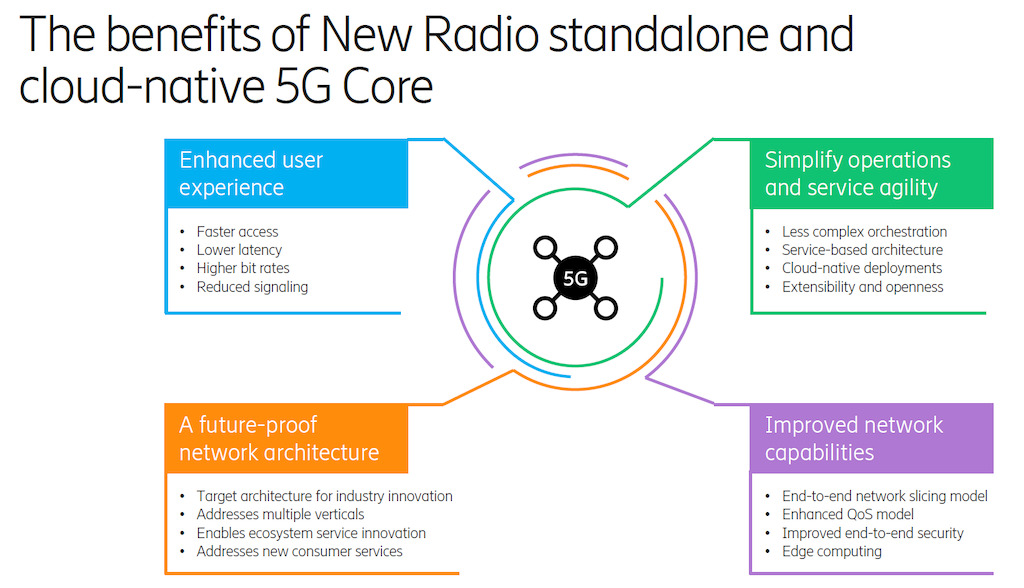 Nokia also regularly reports on its progress with its European customers on SA 5G. At the beginning of August, for example, Nokia completed the first test of aggregation of four spectrum channels on a commercial SA 5G network of the British operator BT , an issue that, as has been indicated, is important, which has just now just finished. to complete.

The SA 5G rollout is progressing, albeit not as fast as planned. In any case, Nokia published a report a few days ago by the GlobalData consultancy in which it is highlighted that the operators and security services are very concerned about the lack of security of current networks and the enormous additional resources that must be be assigned. The attacks, they say in the survey, are increasingly sophisticated and it is feared that they will increase with the implementation of 5G in the coming years, due to the fragmented security tools that are possessed.

As networks become unbundled, with the trend toward open networks, and as industrial enterprises connect their critical networks to public networks, vulnerabilities will increase. About three-quarters of operators say their networks have experienced up to six security breaches in the past year, according to the GlobalData survey.

Andy Hicks, Principal Analyst at GlobalData, says, “Our survey shows that carrier security staff are doing the best they can with the manpower and tools at their disposal.” But he adds that as carrier services multiply, so do vulnerabilities and 5G SA may be worse. The key to redirecting the situation will be the greater automation of the networks.

Operators are obviously concerned about increasing security breaches, which are feared to increase with SA 5G. To try to put a stop to them, more and more security laboratories are being opened. One of the last days has been the one opened by the Belgian subsidiary of Orange in Liège, focused mainly on cases of SA 5G. This operator a year ago had opened another laboratory in Antwerp, while at its headquarters, in France, it has a special laboratory dedicated to Open RAN and the operation of a complete experimental cloud-based SA 5G network.

Orange has positioned cybersecurity as vital for the future of the company and that of its customers. In a presentation last Friday in Lyon, Christel Heydemann, the new CEO of Orange, said that “investing in cybersecurity is not a cost but an investment”, given the increasing escalation of cybersecurity attacks. Heydemann announced that her company will invest heavily in the development of cybersecurity services and in hiring the necessary personnel. Nokia has also just inaugurated a 5G and 6G research laboratory in Portugal, on the Amadora campus.

There is no doubt that the operators and the telecommunications industry as a whole are putting the necessary means to expand the possibilities and expand the use of 5G networks. But many analysts wonder if these recent use cases and recently launched labs don’t reinforce the impression that most of the challenges posed by SA 5G networks are yet to be solved and the key application or applications that should make them flourish are being sought. .