The accelerating emergence of public, private and hybrid clouds, with their internal information processing capabilities, combined with the rise of 5G networks, Edge and artificial intelligence, is dramatically transforming the global landscape of cloud industries. telecommunications equipment and services and information and communication technologies, which are increasingly interdependent and remote from the end user, who only uses them. An example of the consequences of this “digital transformation” that we are experiencing is the division of IBM into two separate companies and the elimination of at least a quarter of its employees. Its bet to survive is to focus its services on a hybrid cloud and focused on telecommunications, with the help of more than 35 partners.

The segregation of a large part of IBM’s information technology services unit, which accounts for almost a quarter of its total turnover and workforce, into a separate and independent company, and the migration of the rest of the assets towards the business based on cloud computing and artificial intelligence means a total turnaround in the company’s strategy. This is an announcement comparable to the one that was made almost three decades ago, when the then chief executive officer, Louis Gerstner, decreed IBM’s turn towards computer services and the progressive abandonment of the supply of equipment, a pillar until then in the company that now has 109 years of history.

IBM will be made up of two independent companies; One will continue to be called IBM, focused on a hybrid cloud platform, and the other, on managed infrastructure services, tentatively called NewCo

As is being specified in recent weeks, IBM will be made up of two independent companies. One will continue to be called IBM, with $ 59 billion in turnover and focused on a hybrid cloud platform, and the other, $ 19 billion, focused on so-called managed infrastructure services, tentatively called NewCo (although critics think OldCo should be said). The two companies, although separate, will continue to have a strong strategic relationship and support each other, because their business continues to be highly interdependent. The following graph specifies a little more the strategy that you want to follow.

Although Krishna emphasized that the “new” IBM will be a leading company with a hybrid cloud platform and artificial intelligence, during a meeting with financial analysts after the announcement of the segregation and it is explicit in the graph, it cannot be forgotten that will continue to sell information technology and telecommunications infrastructure, systems and software services. A significant portion of the $ 59 billion will come from the sale of its System Z mainframes and the monthly revenue it receives from licensing its operating systems, databases, middleware, and its servers based on its Power Systems processors, as well. as the financial support of this infrastructure in the hands of its clients.

NewCo will continue to be the world’s leading infrastructure services company, as suggested by Krishna and the graph, even if this means that Amazon Web Services (AWS), Amazon’s cloud colossus with turnover in the last twelve, will be placed in another market. months of 40,000 million dollars, and that Azure, Microsoft’s armed wing in the cloud, is also left out, despite the fact that its turnover is very similar to that of NewCo. It is true, however, that the new IBM disengages itself with the segregation of its legacy, of its more traditional business, and can put all the focus on the cloud and on the alliance with more than 35 large companies.

Almost all the companies that IBM will be associated with are, by the way, from the United States. An exception is South Korea’s Samsung, which increasingly has a broader and stronger telecommunications network and equipment business, especially in the US market, and Nokia, which is formally Finnish and is going through a critical period of restructuring like IBM, also with a new CEO. The Chinese Lenovo is another foreign company, because it bought IBM its personal systems division in 2005 and is now the world’s leading manufacturer of computers and servers, side by side with HP. The chart below shows the partner constellation and ambition of the designed hybrid cloud strategy. 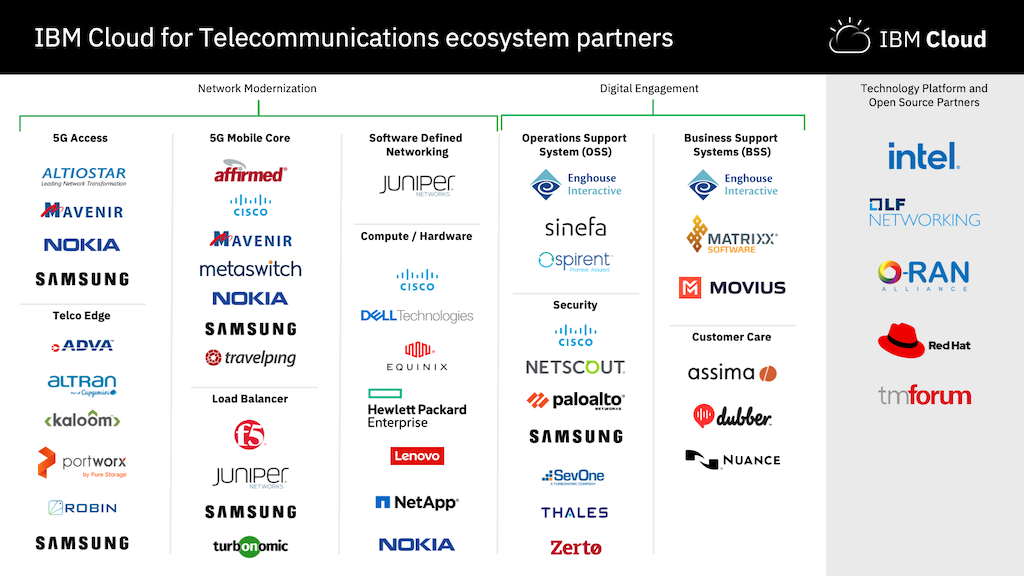 IBM is targeting the platform and infrastructure services market, where the company has an almost irrelevant share, 2.3%, compared to 49.6% for Amazon, 22.9% for Microsoft, 8.1% from Alibaba and 6.1% from Google. Even Tencent and Oracle are ahead of IBM, at 2.8% each, according to 2019 data from the Gartner consultancy. Global revenues from the cloud telecommunications market are forecast to grow annually in the next five years of 27%, going from 8,700 million dollars in 2020 to 29,300 million dollars in 2025, according to the recent analysis of the ABI consultancy. Hence, IBM’s eyes are focused on the cloud.

IBM’s move has repercussions not only for today’s cloud giants but also for telecommunications operators. The transformation of the telecommunications sector that is taking place is so important that operators are migrating a large part of their infrastructure to the cloud and in many cases with the collaboration of AWS, Azure or Google Cloud, as has been highlighted in recent advertisements. Even Nokia and Ericsson have also entered into mutual collaboration agreements with them, apart from their traditional ties with carriers.

IBM’s commitment to strengthening its position in the telecommunications sector, with a hybrid cloud offering, has as one of its objectives to win the favor of operators with a broad and diversified strategy. Marisa Viveros, IBM vice president of strategy and offerings for telecommunications, media and entertainment, said recently that the launch of the hybrid cloud responds to the demand of operators for new options. Undoubtedly, Viveros has affirmed, the interest of the operators in the IBM offer is high, because “they are looking for another supplier”.

IBM’s approach to the telecommunications industry is very ambitious, as reflected in the graph below, and clouds, whether public, private or hybrid, occupy a central place in that strategy, with a distributed architecture and where 4G and The new 5G also have a key place, thanks to the low latency that they will provide and the integrity of the information to be transmitted, even if the servers are located thousands of kilometers away. This link explains the interest that the IBM ecosystem and the launch of a cloud for the telecommunications sector, with multiple partners, can contribute to telecommunications providers to solve some of the challenges they face. 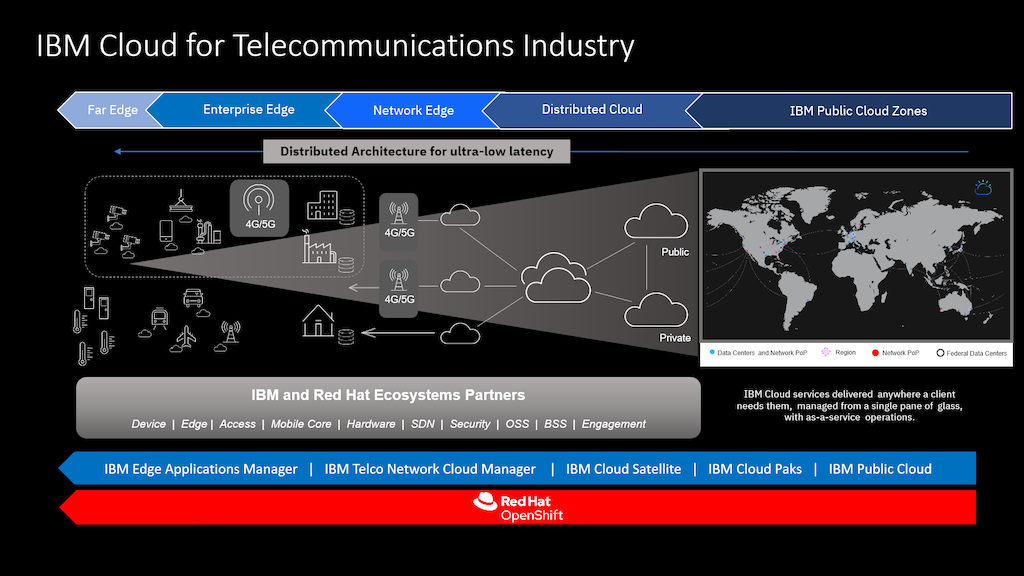 This IBM cloud for the telecommunications industry is built with the collaboration of multiple partners and collaborators, but a central element is Red Hat’s OpenShift open architecture, owned by IBM for a year, as reflected in the graphic. For IBM, the hybrid cloud platform that it is launching will allow its users to generate much greater value and accelerate the transformation of their businesses.

Andrew Brown, CEO of IBM Cloud & Cognitive Software for EMEA, assured that this open and hybrid cloud approach will help companies to succeed in the “new normal” during a session held within the framework of the European IT / Xpo symposium, which was traditionally held at the end of October in Barcelona and which this year has taken place virtually, like almost all meetings and competitions.

According to Brown, most companies have only moved a small percentage of their essential workloads to the cloud, largely because it is a very complex task and it is difficult to get it done. In his opinion, the implementation of a hybrid infrastructure composed of several clouds, which embraces the systems that companies physically have, those located at the edge and in the cloud, requires the adoption of a very robust systems architecture strategy.

The use of secure and open technologies based on a hybrid cloud, such as that advocated by IBM, makes the digital transformation that companies are doing, or want to do, less complicated, he adds. At the moment, according to an IBM study, only 20% of the value of a public cloud is used. To achieve the remaining 80% and multiply the value by 2.5, a hybrid cloud is needed.

It remains to be seen the actual journey that this hybrid cloud strategy that IBM has just launched will take. For many, a major restructuring of IBM was imperative to address the challenges facing the telecommunications and information technology industries. At the moment, the most visible of this new IBM strategy is the dismissal of about a quarter of the workforce, which is currently being negotiated. In Europe alone, it will mean the termination of 10,000 jobs, the vast majority highly qualified and in their 50s.