The companies Huawei, Ericsson and Nokia will most likely continue to control the link network (RAN) market as they have done in the coming years, even if the O-RAN Alliance consortium manages to fully develop its open specifications. One reason is that Huawei, which is not part of the alliance, must consent to its patents being used on open networks. Either way, Huawei, Ericsson and Nokia would receive substantial revenues from potential competitors for the use of their patents and would have a competitive advantage by better understanding the inner workings of the networks. This makes Francis Haysom, an analyst at Appledor Research, forecast that even in 2026 the three companies will control 80% of the open RAN market.

The year that is now ending there has been a lot of talk about open and interoperable RAN networks. Both the large telecommunications operators and the United States Administration have pinned their hopes on them of reversing the current monopoly that the three major manufacturers of telecommunications network equipment hold de facto. Huawei, Nokia and Ericsson account for three to two-thirds of the global telecommunications equipment market, according to Dell’Oro, and about 80% of the RAN market, whether 4G or 5G.

It is likely that in a short time the O-RAN Alliance will complete its specifications to build fully open and interoperable RANs and that, consequently, the Open RAN market will take off, as mentioned in several articles  of this blog. However, the question that has arisen in recent weeks in the sector is not its technical possibility, which is taken for granted relatively quickly, but rather that the obstacles posed by the use and adequate remuneration of 4G and 5G patents can be overcome. that are in the hands of their rightful owners, who are, in large part, the companies that now control the RAN market. And if alternative manufacturers will have room to compete, whether with open or closed RANs.

As the number of network providers expanded, patent infringement lawsuits have also increased: Ericsson has sued Samsung and Huawei has also sued Samsung

The O-RAN Alliance was unveiled at MWC 2018, almost three years ago, at the initiative of five major telecom operators, who wanted a more open RAN: Deutsche Telekom, NTT DoCoMo, Orange, AT&T and China Mobile. Over the years, the alliance has grown to 237 telecommunications equipment operators and manufacturers. The United States dominates the list of companies, with 82 members; followed by China with 44 (3 from Hong Kong); Taiwan with 20; Japan with 14; United Kingdom and India with 10 each and Germany with seven. The idea from the beginning has been not to exclude any country or company to promote the “openness” of the alliance.

The O-RAN Alliance was, in turn, the result of the merger of the C-RAN Alliance, where the operator China Mobile was one of its most active members, along with other European operators, with xRAN Forum, which had more members and mainly Americans. This means that since its inception the presence of Chinese carriers and companies in the O-RAN Alliance has been very important, with the big three Chinese national carriers, and ZTE, Tsinghua, Lenovo and Inspur as the most prominent and very active members. The US presence in the alliance, although it is now more numerous, has less weight than the Chinese and is less involved in the creation of telecommunications standards, according to comments in the sector.

The specifications promoted by the alliance’s OpenRAN Project Group are not, by themselves, a standard but a collection of technical standards that would allow the different manufacturers that incorporate them, to design and build 5G link networks with “standardized open interfaces” . They are standards that detail how the internal components of the RANs should be so that they can be Open RAN, that is, open and interoperable. But all of them depend on and must be in accordance with the standards approved by the 3GPP in their different releases, precisely so that world mobile networks understand each other and terminals with link networks.

To make the situation more complex, it turns out that the 3GPP standards are based, in turn, on different patents that are owned by multiple companies, but that in the case of RANs the majority belong to Huawei, Nokia, Ericsson, NEC and ZTE, because they are the ones that historically have developed the technology the most and have contributed to the creation of the 3GPP standards.

The various 3GPP working groups are largely made up of freed members of telecom manufacturers and operators, who work for the development of an international standard and for the common good but eventually sweep for home. Many of the 3GPP committee members are Chinese with great dedication and knowledge, so it is not surprising that there is a lot of Chinese influence on global telecommunications standards.

Appledor Research estimates that total turnover for Open RAN components and services in 2026 will be in the order of $ 11 billion in 2026, a third of the total RAN market by then.

Patents that become part of 3GPP releases are assigned by their owners on fair, reasonable and non-discriminatory terms, known as FRAND terms (for Fair, Reasonable And Non-Discriminatory). The members that are part of the O-RAN Alliance have agreed to also assign their patents under the FRAND terms so that Open RAN equipment can be manufactured, among which are Ericsson and Nokia, and many others such as ZTE, Samsung or NEC, but not Huawei.

As Huawei is not part of the O-RAN Alliance, its patents are also not available to the alliance if the Chinese company decides not to assign them. They are Huawei patents included in the 3GPP standards and, consequently, they can be used by any company, under FRAND terms, that makes equipment according to the 3GPP standard. But the OpenRAN Project Group specifications, which have been added to the international standard, cannot be used if the patent owner has not previously assigned them to the alliance or is not a member of it, as is the case with Huawei.

The FRAND terms have a long jurisprudence behind them, but their application also depends on the good will and capacity for compromise between the parties. When the RAN members formed a fairly closed “club,” it was easy for them to understand each other and trade patent rights. But when new suppliers enter the market, such as Samsung, the issue becomes complicated and business interests take precedence.

In early December, Ericsson filed a lawsuit against Samsung in the Texas court because it believes that the Korean company has violated its commitments to negotiate in good faith the patent licenses it holds under FRAND terms.  Lenovo has also sued Nokia, in this case in the California court, for having abused and misconduct with the use of the H-264 video compression standard, as commented by the patent portal Fosspatents.

The lawsuit that can have more consequences, depending on the different sentences and evolves, is the one that Huawei has recently filed against Samsung in a United States court, and that already comes from a lawsuit that Huawei filed against Samsung in China at the beginning of 2018, as Hogan Lovells recounts, among other specialized legal portals. Apparently, Samsung does not accept Huawei’s conditions, from which it follows that an agreement for the assignment of patent or patents has not been reached by Huawei and Samsung has turned a deaf ear.

From the legal analysis of the Huawei vs Samsung case of 2018 it appears that the FRAND terms are very complex if there is no good will on both sides and that it can involve multiple courts countries. Obviously, the $ 6.6 billion contract that the US operator Verizon awarded to Samsung last September and the US veto of Huawei to participate does not favor Huawei to give in easily. But if the legal conflict grows, Verizon may have problems with the supply of Samsung equipment and it is a serious warning for mariners.

The US Administration and congressional and Senate telecoms specialists have realized that suppressing Huawei or dispensing with Chinese influence on telecom equipment will not be easy, despite the triumphalist tone of the Open RAN Policy. Coalition, the Clean Network of the United States and the legislative proposal of the Congress and Senate of the United States to invest 1 billion dollars to find alternatives to Huawei and ZTE equipment with open networks.

One third of the Open RAN market by 2026

In any case, and assuming that open RAN networks can be manufactured on a large scale, that they work correctly and with the corresponding patent use permits according to the specifications of the OpenRAN Project Group, a report by Francis Hayson, an analyst at Appledor Research, It estimates that the total turnover of Open RAN components and services in 2026 will be of the order of 11,000 million dollars in 2026, a third of the total RAN market by then.

But of these 11,000 million, about 80% will go to traditional providers of link networks, because they will have a very competitive Open RAN offer by then. Above, of the 2,200 million that it is calculated that the true “Multi-vendor open RAN” will invoice in 2026, where operators or system integrators will be able to choose the equipment that best suits their needs, 30% will be kept by the integrators of systems, according to Hayson. Open RAN: Major New Research Report – Appledore Research The evolution expected by the analyst is shown in the following graph. 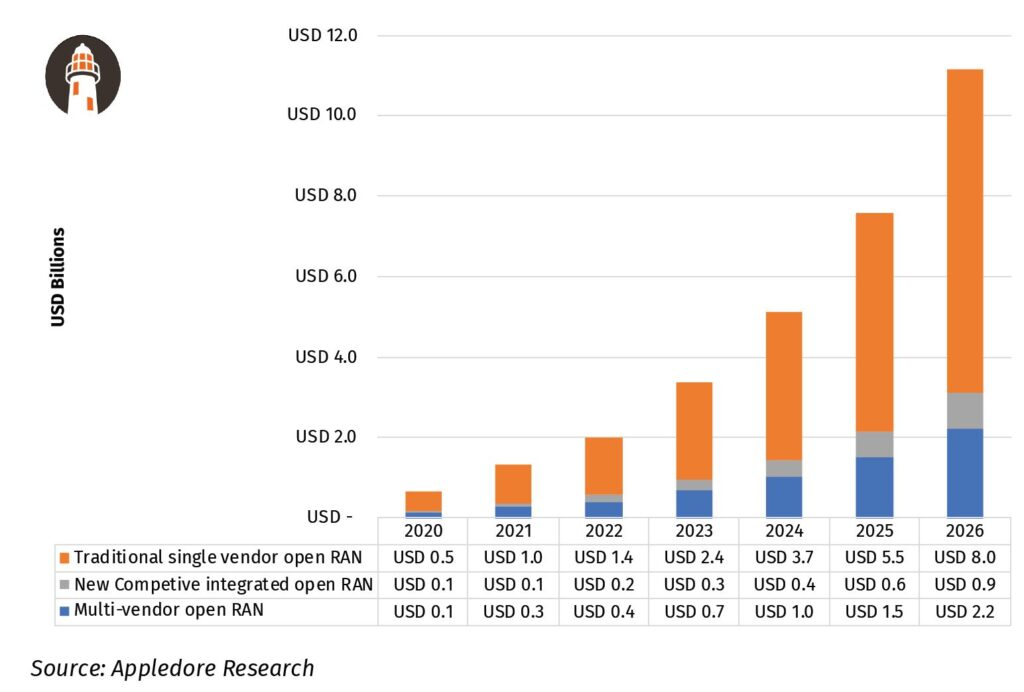 If in the end it turns out that the vast majority of open link networks to be installed in the coming years are from today’s traditional providers, as the Appledore study suggests, the Open RAN initiative would be of little use at first glance. But Hayson says that the main motivation of operators is to avoid being tied to a single supplier. If the teams are open, or partially open, it will be easier to find alternatives if necessary and the Open RAN initiative will have paid off.

What does not seem to be easy, even in the US networks, is to get rid of the Chinese teams, to have the “clean networks” as promised by Michael Pompeo, the Secretary of State who will be replaced in a few days. It will be a new dose of reality that the still president-elect, John Biden, will have to face for the next four years.

In the end, it would be quite curious if the idea enunciated last July by the then director of technology of Nokia, Marcus Weldom, and now ceased, to create a relatively open RAN, but at the same time integrated, would prosper,  in the sense that operators have greater flexibility when it comes to switching supplier.

And if the European Union reaches a broad trade and technological agreement with China, as seems imminent, and the United States strengthens its ties with the European Union, as is likely, perhaps the relations between the United States and China will be able to normalize more and see the “Security” of the networks from another more conciliatory or, at least, de-escalation of the commercial and technological conflict between the two. What is certain is that 5G networks will continue to be in the political, commercial and technological limelight for years to come.