The trend of telecommunications operators to reach agreements with large technology companies to manage their networks and thus reduce installation and operating costs seems unstoppable. In the past MWC, AWS and Google Cloud announced several agreements developed in recent weeks, but the surprise came when Microsoft announced that its Azure cloud service will take over all the operation and management of the AT&T network, the great American operator, precisely on the same days that the MWC took place.

“Amazon Web Services (AWS) is talking to literally every telecom operator,” Adam Selipsky said during a presentation at the MWC. Selipsky is now the head of AWS, having happened a few days after the Barcelona congress to Andy Jassy, ​​who has become the head of Amazon when Jeff Bezos, founder and maximum owner of the company, cedes his position. This phrase by Selipsky demonstrates the firm ambition of large technology companies, especially the United States, to control the world telecommunications market, at least the American and European.

AWS already controls a large part of the computing services in the cloud and has agreements with many telecommunications operators and with the main companies to manage their networks with their programs that work from the cloud. AWS is well ahead in terms of billing for Azure, Microsoft’s cloud services, and Google’s, known as Google Cloud. Google Cloud had, like AWS, a prominent presence at the MWC, mainly virtual, formalizing agreements with Ericsson and Swisscom, but it was Microsoft that reached the highest prominence when its agreement with AT&T was known, despite its discreet presence at the Barcelona congress.

AT&T assures, when announcing the strategic agreement on June 30, that it will move its entire 5G mobile network to the Microsoft cloud, which will pave the way for “all AT&T mobile network traffic to be managed using the technologies from Microsoft Azure “. The companies will start with AT & T’s 5G network core, the software at the heart of the 5G network that connects mobile users and IoT devices to the Internet and other services.

“By bringing existing and future AT&T workloads to Azure for Operators, it will enable AT&T to increase productivity and cost efficiency, while also being able to focus on delivering large-scale network services that meet future needs. of its clients ”, specifies the joint statement of AT&T and Microsoft.

AT&T, assures the operator, will continue to operate its network. The only thing that changes, assures Igal Elbaz, vice president of engineering and operations of the company to Fierce Wireless, is that Microsoft will go on to develop the software that works on its network based on the cloud and everything concerning operations and development; but the creation of the service and the network functions will remain in the hands of AT&T. The operator began its journey towards virtualizing its network operating system seven years ago, which included separating hardware from software, a trend that has now become widespread, Elbaz believes.

At that time, adds the AT&T executive, it was not clear that there was the right cost structure or that a totally reliable external support could be used. Now, however, “we have reached a point where we can leave the cloud platform that we have developed for years in the hands of Microsoft and, at the same time, build an ecosystem that works for AT&T and other operators.”

The evolution of containerized network operation will continue to be driven by AT&T, because Elbaz believes AT&T needs the expertise to design, build, develop and operate the network in-house. The only thing that has changed, he insists, is that the cloud platform that AT & T began to create will be managed and developed by Microsoft.

Beneficial agreement by both parties

Both Microsoft and AT&T believe that the agreement they have reached is beneficial for both. For AT&T, because it avoids dedicating large resources to continue developing and operating the platform on the cloud. And for Microsoft, because it is a great opportunity to manage an important network in operation and with real customers and apply the technology it already has to expand and improve it. No details have been given of the economic and financial conditions of the operation, which makes it impossible to determine who has benefited the most from it.

On the one hand, it is acceptable that AT&T manages to reduce its platform development costs, while for Microsoft it is a great opportunity to manage a real large network. Microsoft will have to allocate considerable resources but, in return, it will allow you to access the real operation of a telecommunications infrastructure, with the problems and advantages that this entails, in order to later be able to transfer this knowledge and the services obtained to other clients, obviously with the appropriate rate. .

It is not the first agreement of its kind made by Microsoft and AT&T. In 2019, both companies announced a $ 2 billion agreement focused on artificial intelligence, 5G and the migration of network operations to the cloud, which AT&T dubbed the “first public cloud strategy.” Now, with the deal announced on June 30, AT & T’s 5G core will pass to Microsoft and in the next three years AT & T’s entire cloud network will be managed by Microsoft.

Amazon Web Services (AWS), like Microsoft Azure or Google Cloud, want to conquer more important parts of 5G networks with their mastery of software, as was made clear at the MWC

Last September, Microsoft acquired Affirmed and Metaswitch Networks, two carrier software companies, in an operation estimated to be around $ 1.6 billion, putting the agreement with AT&T in a very prominent position to offer services in the cloud to telecommunications operators. According to Synergy Research, AWS is the leading provider of cloud computing services, with a 30% share in terms of billing. In 2017, Microsoft had a 10% share but last year it doubled it, reaching 20%, the consultancy calculates. Precisely, the announcement of the creation of Azure for Operators, at the same time as the purchase of Affirmed Networks, has allowed much of this advance.

The development of cloud platforms has been extraordinary in recent years and has allowed numerous advances in the provision of telecommunications services and, above all, on a large scale and practically overnight. But it has also required large resources, in the order of 100,000 million dollars annually in recent years, which it is not clear that they can be profitable in the medium term, when pressure on margins with increased competition reduces profits, as stated Andreesen Horowith in a recent report on the public cloud. The bottom Synergy chart accompanying Andreesen’s report highlights the sharp increase in spending on cloud infrastructure services in recent years, versus relatively stable spending on data centers. 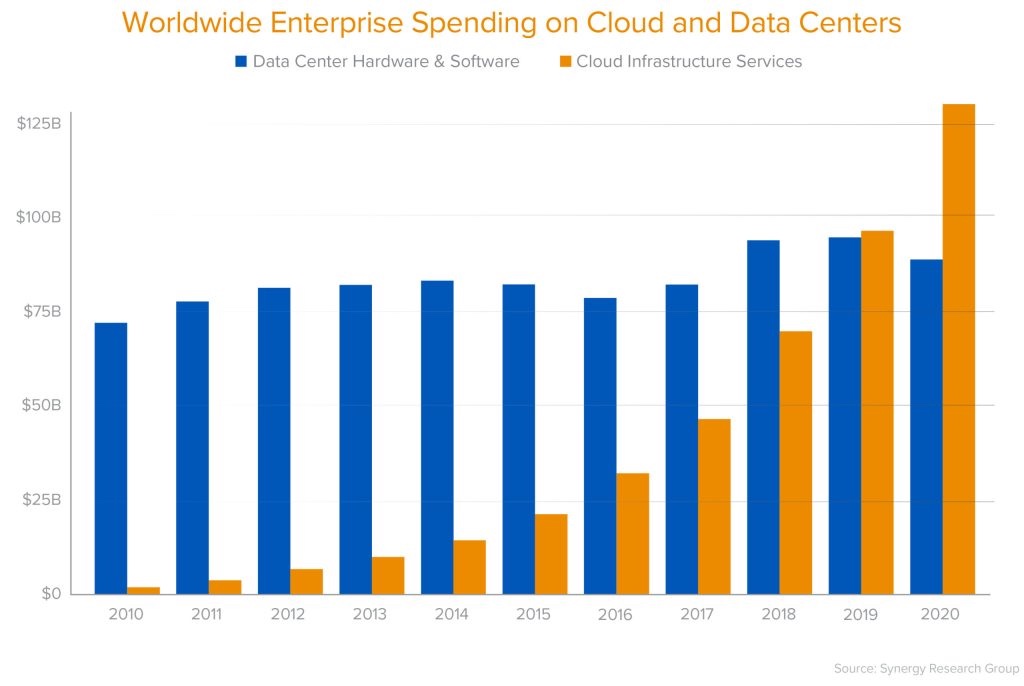 AT & T’s operation with Microsoft is far from isolated. Dish, an American operator that is going to build a new 5G network thanks to the fourth license obtained by the merger of T-Mobile US and Sprint and the assets from which they had to divest, will fully outsource AWS cloud services for the operation of the network, limiting itself to operating the commercial service. Another new AWS customer is the Swiss operator Swisscom, as highlighted by Adam Selipsky at MWC. There is no doubt that Amazon will continue to bet very strongly on AWS, its great “dairy cow”, now that its CEO is Andy Jassy, ​​replacing Jeff Bezos, and the main AWS strategist as the head of AWS until two weeks ago.

Aside from Dish and Swisscom, AWS’s major customers include several telecommunications operators, including Telefónica, SK Telecom, Bell Canada, Verizon and Vodafone. AWS tries to convince them that with their services they can achieve higher billing with additional services, apart from cost savings, especially in research and development. This is not much in doubt, but it is feared that operators will lose their business sovereignty in the medium term, as they increasingly depend on the services provided by large technology companies. One of the main customers of AWS is the US operator Verizon, which is one of the big three and with a national presence in the United States.

Amazon’s initial strategy with 5G networks was to deliver virtualized and network functions in native clouds that run inside containers (Kubernetes) and on company farms. These AWS server farms resided in different Amazon computing “zones”, but lately the company has modified its centralized cloud design and created separate pieces that can more easily fit into carrier networks.

The evolution of this strategy is that AWS will go from having huge and complex databases to data “lakes”, in which each lake will have its own architecture and which can be easily manipulated with the latest Machine Learning and intelligence technologies. artificial. Naturally, AWS wants to convince its customers, the operators, that this way they will be able to develop and bill their customers for new services, based on the data they already have. The fear of the operators, as has been indicated, is that their dependence on big technology will increase so much that in the end they no longer have the freedom to act to develop their business.

Google Cloud, the third in contention within the large US technology companies in the cloud, was also very active at the MWC regarding the future of its business with operators. Last year, Google Cloud started a collaboration with AT&T in 5G networks and Edge Computing, and in Barcelona it assured that now the agreement is bearing fruit.

One of the new services announced with the agreement is AT&T Multi-access Edge Compute (MEC) with Google Cloud, which allows data to be managed at the customer’s convenience, either in a data center or in any cloud computing environment. Another service unveiled is AT&T Network Edge with Google Cloud, which empowers business customers to get in and link to Google’s 5G and fiber networks with an entirely new architecture. The intention of Google Cloud is that this service can be carried out in more than 15 of the 76 areas that the company has, starting with Chicago this year. In a statement last week this collaboration is explained in various fields of activity, such as health, manufacturing or entertainment.

In Europe, Google Cloud has reached one of its most important agreements with the French operator Orange. And it is that in telecommunications networks software is increasingly important. To take advantage of the promise of low latency of 5G networks, it is crucial to have the databases very close to the customers, which is known as Edge Computing, but also linked by optical networks to databases located in the cloud for large information processes and data analytics.

The operators have an important asset, the mobile telephony spectrum, which allows them to connect with customers in the last section. But the investments necessary to achieve more powerful and efficient clouds are, in turn, immense, which advises that operators reach an agreement with the big technologies. It is also interesting for manufacturers of mobile phone equipment, because the software is just as important. Hence, for example, Ericsson has reached an agreement with Google to make it easier for companies to have private networks with the help of operators, the Swedish firm and the American technology company.

The situation is so dynamic that everyone is forced to talk to everyone, and especially technology companies with operators, as stated at the beginning by Adam Selipsky at the MWC. It remains to be seen if the great ambition that big tech has shown can be put on track well for the benefit of all. The executive order that Joe Biden signed last Friday seems to want to curb the appetites of his technology companies, as well as the European Commission is trying to put some order in the telecommunications sector and try that, at least, the data in the databases of companies and users of the European Union do not go outside the Community borders, something that now seems very complex.