Global smartphone sales have fallen 6% this third quarter, according to the provisional results of Canalys, which will make the units shipped this year 2021 grow predictably around a meager 6%, well below the 9% forecast ago. a few months, which was already scarce because it was starting from a disastrous 2020 due to the peak of the pandemic. The global logistics crisis, which affects the entire supply chain of materials, components and capital goods, is putting in check the sales forecasts in this final part of the year, now that the pandemic seems to be minimally controlled, and the sale of smartphones is no exception.

In principle, it was thought that smartphones would be the least affected by the rise in transport costs and the price of chips, thanks to their relatively small size and high unit prices, which means that the finished product can be distributed by plane. . The great purchasing and bargaining power of smartphone manufacturers, who also work many months in advance when placing orders and can pay a higher price for components, led to the assumption that they would overcome the logistics crisis without serious problems. and the shortage of chips, maximum with a moderate rise in the price of the final product. But this has not been the case and there are supply problems throughout the smartphone value chain.

Furthermore, the shortage problem is mainly concentrated in the higher priced models, above $ 400. Even Apple, which is the company that best knows how to manage its logistics chain and the supply of the necessary components to the Asian companies that make iPhones, and its margins are so high that it can pay what they ask for the chips, too. you have a lot of finished product sourcing problems, especially for your new iPhone 13.

The relative shortage of some smartphone models and their average price increase, especially the most expensive and 5G, is not expected to be resolved until well into next year.

That the newer models of smartphones are the most problematic to manufacture and assemble is also not surprising, because they are, logically, those that use the most recently designed components and that have begun to be manufactured in early spring, to assemble them during the spring and very early autumn and thus have them in stores at the end of autumn, just for the purchases of the Christmas campaign. The rebound of the pandemic in many Southeast Asian countries, especially in Vietnam, has put subcontractors on the ropes and cannot meet the expected delivery deadlines, which were already extremely tight and with strong supply stresses for critical components. a year and a half.

The current forecast of the consulting firm Counterpoint is that in 2021 as a whole, the 1,400 million smartphones sold will be barely exceeded, 6% more than in 2020, when a growth of 9% was estimated a few months ago. Specifically, Counterpoint now estimates that 1,414 million units will be shipped in all of 2021, compared to a previous forecast of 1,447 million. We must think that we start from an extremely low unit sales figure in 2020, of 1,331 million, when in 2019 it was 1,479 million and in 2018 they slightly exceeded 1,500 million, as shown in the graph below. 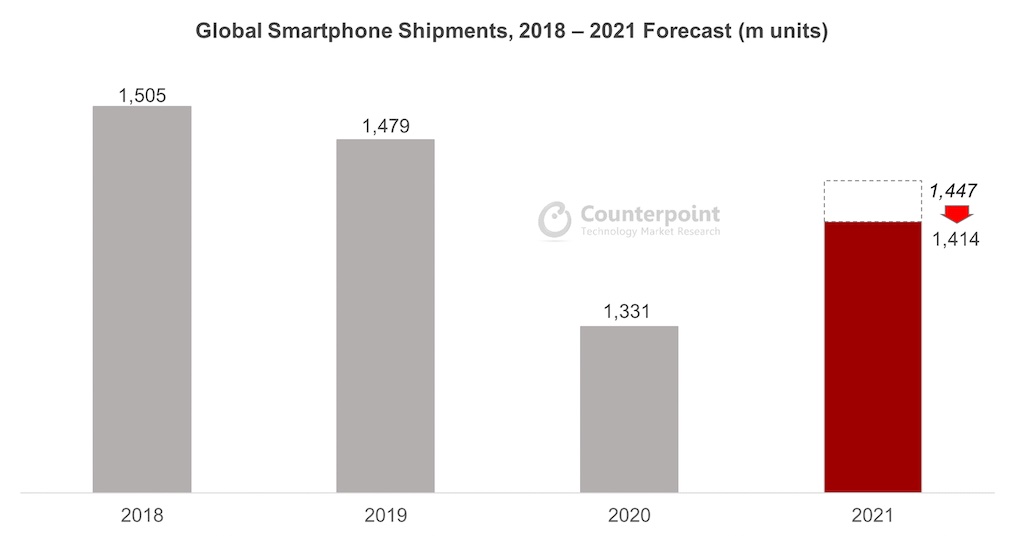 These forecasts for smartphone sales in 2021, however, are not very dramatic if in the end they touch 1,400 million units, because there were already downward expectations as the year progressed. The consultancy IDC, for example, forecast on August 30 that 1.37 billion units would be shipped in all of 2021, with a growth of 7.4%, followed by an increase of 3.4% in 2022 and 2023. this last year where the cruise figure of 1,500 million smartphones shipped around the world would return, each time those of the 5G type in greater proportion, as seen in the graph below. 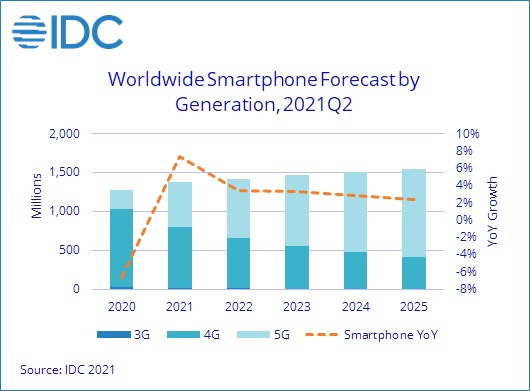 The problem, in fact, is not the unit supply figures, but the global turnover or the average price of smartphones. As the shortage mainly affects the higher-priced models, those of the 5G type, which are in high demand and those with a higher profit margin, the drop in billing will be much higher than expected at the beginning of the year. Migration to 5G, whether for one reason or another, is continually complicated.

Semiconductor supply does not supply

For almost a year and a half, the world has been immersed in a chronic shortage of semiconductors, which has caused most car manufacturers to have been forced to stop the production of many car models due to the lack of one or more of them. its electronic components and now there is also a shortage of toys or small appliances.

The automotive sector has been one of the most affected by the shortage of chips and the one that has attracted the most attention due to its serious repercussions at all levels, but it is not even remotely the only one, because the shortage of raw materials and materials and of all kinds of components and capital and consumer goods is widespread in the world.

The shortage of raw materials is not due, in general, to a reduction in supply but to an excess of demand. In the case of smartphones, until the beginning of this year there were no special supply problems for smartphone components because, in anticipation, assemblers had accumulated large stocks of the necessary components, which are also relatively standard and in high demand, of several billion chips of all kinds.

Apple keeps about 75% of the operating profit of the smartphone market while Samsung takes 15% and the other manufacturers the remaining 10%, according to Counterpoint

On the other hand, automakers were not so lucky because they canceled the orders for components as the demand for cars fell at the beginning of the pandemic, which are also specific to each car model. When demand for cars took off, chip plants were saturated making the most standardized circuit designs and car designs were relegated; is still happening. Sony, which a year ago needed several million very specific and newly minted processors for its video game console, could not meet the expected demand nor can it fully do so a year later.

The same is true now with new processor designs for smartphones. Qualcomm can reasonably supply the processors introduced just over a year ago, because the necessary production equipment was already in place. The new 2021 SnapDragon designs, on the other hand, have more production difficulties, because manufacturers, be they TSMC or Samsung, have to attend to other equally important urgencies, although Qualcomm is one of their big customers.

The same thing happens to Apple with components that it has recently introduced, such as a greater demand for OLED-type displays. And Mediatek, Qualcomm rival in processors for smartphones, although it is a Taiwanese company and has its supplier TSMC just around the corner, it also struggles.And it is already known that if a few key components are missing, even one, the whole Global production is paralyzed, as unfortunately happens very often to automakers on some models.

To make matters worse, another not inconsiderable factor is added. It is natural that if a manufacturer fears that it may have supply problems for some key components, it will double or triple the order it had planned, to see if a large part of what was initially planned arrives on time (in the case of high volume components). and very standardized, of course). The component manufacturer has no way of knowing whether the order is inflated or not and it may happen that, in the end, the production capacity is in the end much higher than the future demand in specific components while they are imperiously lacking in others.

Some politicians in the United States, who clearly do not know the real world, had no qualms about requiring TSMC and other large chip manufacturers to pass them the list of orders they have in their portfolio and the quantities, in order to manage them. rationally supply (privileging their own). As expected, the manufacturers flatly refused because it was absolutely confidential information and the strange idea has no longer been known. But it confirms that some officials still think that these complex issues can be resolved with a check book or government decree.

Counterpoint estimates that 90% of the entire industry related to the manufacture and final assembly of smartphones is affected by the generalized shortage of components and some of them claim, according to the consultancy, that they have only received 80% of the key components requested during the second quarter of this year; others speak of 70%, which creates many chain problems.

Some chipmakers have increased the price of components, in order to better match supply with actual demand (and have an extra profit). But even so, the consulting firm Canalys does not think that supply problems can be addressed until well into next year. This general increase in costs, including that of transport, has caused the final prices of smartphones to tend to rise.

The consulting firm Strategy Analytics estimates, in a report at the end of October, that the average gross price of a smartphone will rise by 11% this year compared to 2020, from $ 279 to $ 310, the first time it has risen from $ 300, a figure that will be predictably that of next year. The increase in turnover will be even greater, from 358,000 million dollars last year to 435,000 million this 2021, to increase again to 454,000 million next year, as shown in the following graph. 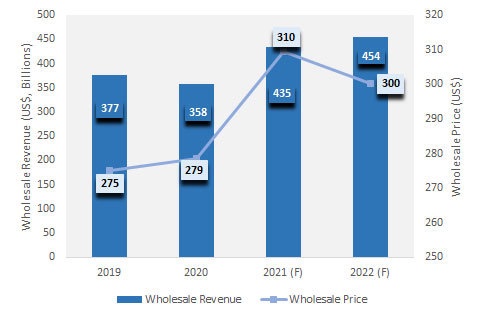 The result of all this is that most smartphone manufacturers, such as Samsung, Oppo or Xiaomi, have cut their sales forecasts in the second half of the year. Apple appears to be the least affected, due to its great bargaining power, as does Samsung, which produces many of the key components needed in-house. 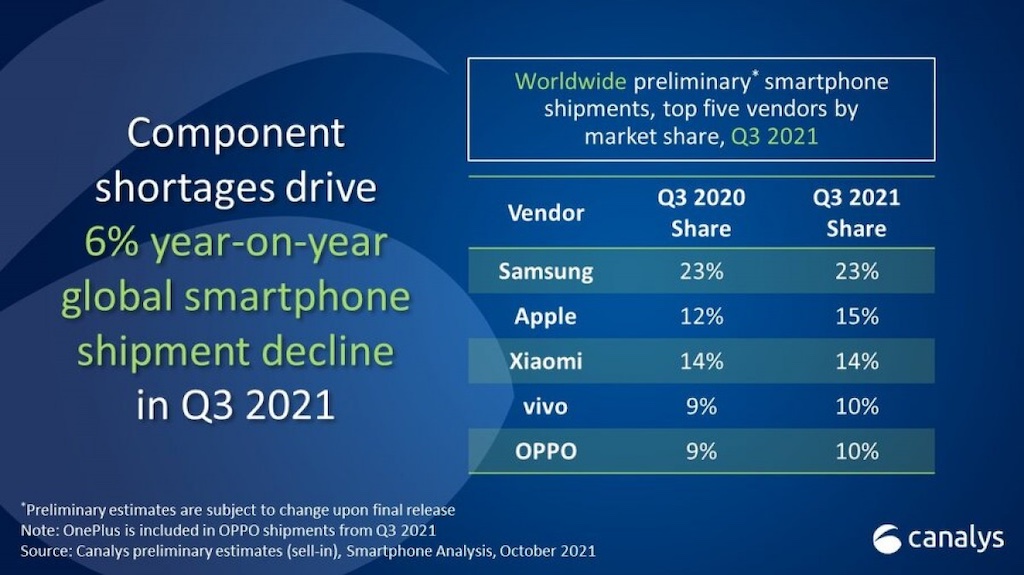 Then come Xiaomi, which maintains the 14% share, followed by Vivo and Oppo, each with 10%, compared to 9% that both had in the third quarter of last year. Among the five major world producers of smartphones, therefore, they now account for 72% of the total world market, compared to 67% in the same period last year. The greatest disappearance of Huawei, although in part it wants to re-float with the new independent Honor, it has been noticed a little more last quarter.

If the global market for smartphones is fairly distributed among the five main manufacturers, not so the benefits, since Apple takes no less than three-quarters of all the profits in this sector, according to Counterpoint. As the graph below shows, Apple’s market share fell during the first and second quarters of this year, but less its global market turnover share, which went from 50% to 40%, and less its operating profit share, which went from 80% to a more than healthy 75%. 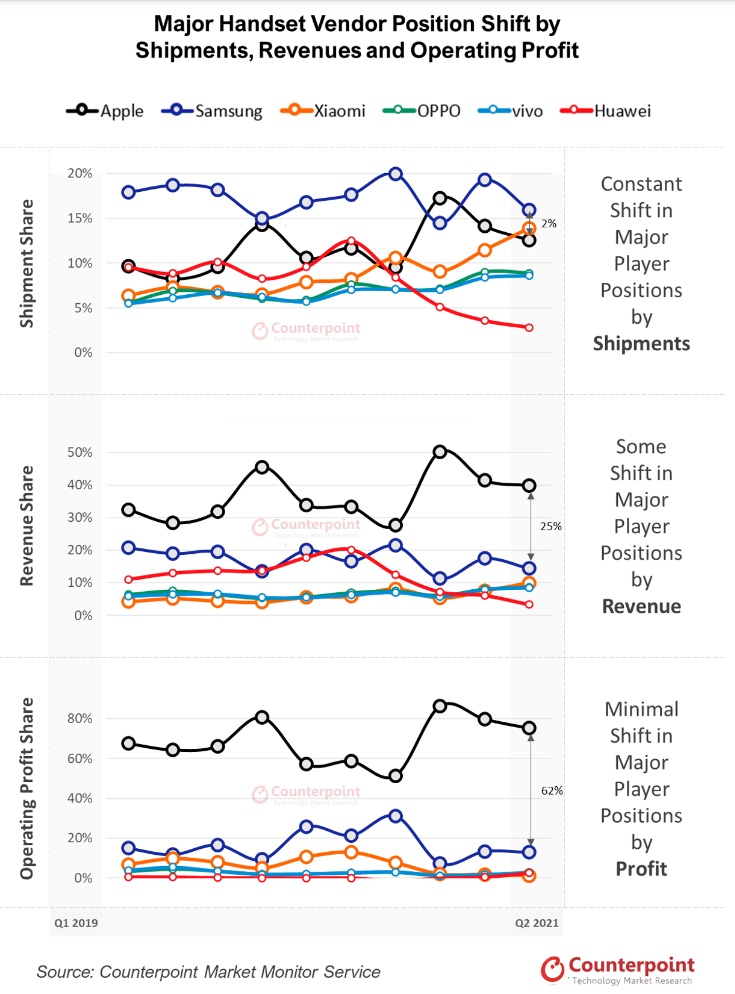 Compared to Apple, Samsung and the other manufacturers share a negligible part of the total turnover, around 10% on average, and much less of the operating profit. Only Samsung achieves a 15% operating profit, compared to 75% for Apple, and the others much less, almost nothing, as can be seen in the Counterpoint graph. And the fact is that the smartphone market is unique in the world and not only because of its gigantic volume year after year and its power to engulf other products, but also because of the majority of the benefits left to a single company in the world.