The European Commission will work in the coming months to get the Internet giants, mainly American, to contribute to financing European telecommunications networks and not just use the Internet without contributing practically anything. At least, that is what emerges from statements by the powerful community executive vice-president, Margrethe Vestager, in which she assures that “the demand [of European operators] for a fair contribution to the networks must be considered with great attention” .

The statements of the vice president of the European Commission were made on May 2, during the course of a press conference in which the investigation that Brussels will carry out against Apple for abuse of a dominant position by maintaining its platform was announced. Apple Pay closed to competitors, in which contactless payment is made through the iPhone of the American company. Sources from the European Commission assure that the teams of the Vice President and the Commissioner for the Internal Market and Digitization, Thierry Breton (both in the photo above) have been working on the issue for a year now.

Breton himself sent a tweet last Wednesday in which he assured that “a handful of actors alone occupy more than 50% of the world’s bandwidth and that now is the time to reorganize the fair remuneration of the networks.” And he added that, after the DSA and the DMA (the two laws on services and digital markets approved in the last two months), adequate remuneration “will be one of the main tasks of our digital space.”

On Monday of last week, while Vestager communicated the lawsuit filed against Apple, ETNO, the association that brings together a large part of the European operators and acts as a pressure group, published an extensive report, prepared by the consulting firm Axon and entitled opportunely “Internet Ecosystem in Europe: socio-economic benefits of a fairer balance between digital giants and telecommunications operators”.

The report presented by ETNO highlights that the transformation of networks in Europe has been carried out based on great effort and cost. The association calculates that European operators have invested close to 500,000 million euros in the last ten years in the development of European fixed and mobile networks. But, he points out, “most of the growth in data traffic in the last decade has been carried out by a small number of leading providers, with little or no contribution to the development of national telecommunications networks, and who now represent close to 55% of all network traffic.

The ETNO report echoes another April 7 study by Frontier Economics commissioned by Deutsche Telekom, Orange, Telefónica and Vodafone, estimating the costs attributable to traffic from leading Internet providers (known in the industry as OTT, “Over-the-Top”) on European telecommunications networks. As Table 1 of the Frontier report indicates, traffic attributable to OTTs could generate total annual costs for European telecommunications operators of between €36 billion and €40 billion per year.

These estimated total costs include various fixed costs, which do not depend on traffic volume. For this reason, Table 2 of the same report estimates the variable costs, which depend on the volume of traffic, with a series of assumptions to evaluate the incremental costs directly attributable to the traffic generated by OTTs on fixed and mobile networks, which ranges from between 2,000 and 6,000 million euros for fixed networks and between 13,000 and 22,000 million for mobile networks.

As the authors of the study acknowledge, the variation of the incremental costs is very wide, compared to the total costs, due to the inherent difficulty in estimating the variation of the costs according to the level of traffic, but they emphasize that it can be taken as an indicator of the such a high cost that European operators must bear due to the traffic generated by OTTs. It is also noted that these are average values, which may be higher or lower depending on each operator and the territory in which it operates.

Benefits with a more balanced situation

European operators, says the ETNO report, “are not in a position to negotiate fair commercial terms due to the increasing use of their networks by the leading OTTs”. This is due, he adds, to the fact that its offers are now essential for users, its dominance of the market is increasing and there are no economic, regulatory or political mechanisms that help restore a fairer and more balanced situation. In addition, he warns, this situation means that many operators cannot have a viable return on investment and, if it continues like this, “it could jeopardize some of the connectivity objectives of the European Commission’s Digital Decade”.

The report devotes section 3 to showing that if this situation were reversed, substantial socio-economic benefits could be achieved for Europe as a whole. And as an illustrative example, he points out that if the Internet giants contributed 20,000 million euros annually to the development of telecommunications infrastructure in the European Union, GDP would increase by around 72,000 million dollars in 2025, with a parallel growth in employment of up to 840,000 jobs per year, apart from positive effects on the levels of experience and innovation of workers and a strong reduction in energy consumption and carbon emission levels.

Section 4 of the ETNO report points out some of the options that could help the European Union to achieve the development of an adequate framework so that “all market players benefit from digital transformation and a fair and proportional contribution is made to the cost of public goods, services and infrastructure”, as indicated by the commitment of the European Commission in its draft declaration of digital rights and the beginning of the digital decade of January 26 of this year.

A clear negotiating obligation should be introduced with Internet providers, which would help ensure proper business negotiations with Internet giants, ETNO proposes in its report

The conclusion to be drawn from the ETNO report and its companion Frontier is clear: “Specific regulatory action is urgently needed to address serious imbalances in Internet traffic markets and unlock socio-economic opportunities for citizens.” and [European] business is said in the association’s statement.” This should be done, he adds, within the framework of the principles of the European open Internet, while ensuring that all consumers fully benefit from improved and quality network access.

The solutions, adds the report, “should introduce a clear obligation to negotiate with Internet providers.” This should help ensure proper business negotiations with the Internet giants. These measures should be in accordance with the new digital market law (DMA), recently approved by the Commission, as well as existing legal frameworks such as the Electronic Communications Code (ECC), the broadband cost reduction directive and the resolution mechanisms currently in dispute, such as the Copyright directive or the European proposal for payment of essential patents.

The director of ETNO, Lisa Fuhr, has declared that “the European Union is determined to address the imbalances of power in the technological and online spaces in the European Union”. With the report now released, “we want to introduce an open dialogue with regulators, consumers and tech companies to address these imbalances.” And she adds that this is not a technical issue: it refers to our possibility of putting Europe at the forefront of the race for 5G and fiber optic networks.

The GAFAN on the defensive

The Internet giants, especially the so-called GAFAN (Google, Apple, Facebook [now Meta], Amazon and Netflix) which are the ones that use the most Internet traffic in Europe, have not received the proposal or the comment of the executive vice president at all. from the European Commission that they should pay financial compensation to telecommunications operators for using a lot of Internet traffic.

The CCIA, a pressure group that acts in favor of the Internet giants, has been totally opposed to giving compensation, because it considers “that the operators already charge their clients, the Internet users.” Besides, he adds, this wanting to charge for using the Internet has always been rejected by US and European authorities. Netflix has not made a public statement, but has recalled that the company has been investing around 1,000 million dollars a year for years in Internet servers that, apart from redirecting traffic, lighten the load that networks must bear when sending services in streaming movies and series to European users. These types of investments, she believes, should be taken into account when dealing with the subject.

As if there were not enough with the predictable reluctance of the Internet giants to collaborate with investments in networks in Europe, various associations in favor of the defense of Internet freedoms, such as the criticism surrounding the copyright directive that remunerates the publication of press articles on the Internet, have also expressed their reluctance. And, above all, the greatest danger is centered on the concept of “Internet neutrality”, a principle that states that all content must be treated equally.

It is foreseeable that, if the Internet giants agreed to finance part of the Internet networks in Europe, they would demand preferential treatment for their services, such as a guaranteed access speed or some kind of priority. The so-called Network Slicing, or a la carte services that are often talked about with the introduction of fully 5G networks, would become widespread, with different types of services depending on what the user pays. It would be about opening a melon that, in any case, will be difficult to keep intact. 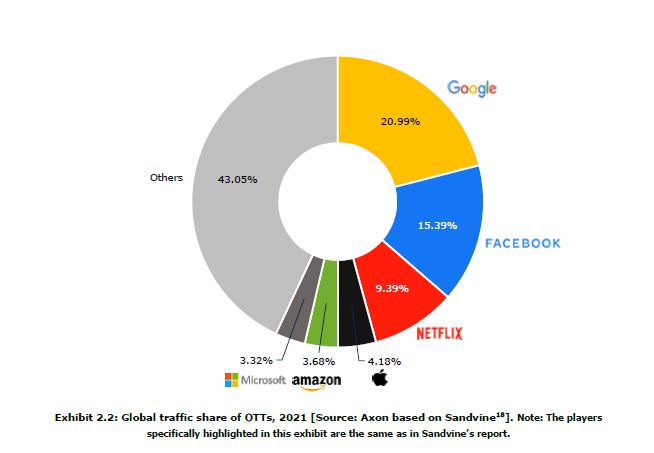 In any case, a point has been reached with the situation of Internet services in Europe (and in the rest of the world) that any observer recognizes that a little order has to be put in place. The ETNO report includes the two graphs above in which it is seen that the traffic share of Google, Facebook and Netflix together is close to 45% of the total and that video traffic represents more than half of the traffic total.

For Margrethe Vestager, as head of the European Commission’s Digital Agenda, together with her faithful assistant, Thierry Breton, also the commissioner and head of digitization in the European Union, they are presented with a dossier that is very complex to tackle but equally urgent if you want to achieve the objectives of full digital connectivity in the European Union by 2030. The United Kingdom also wants to put a little order in this digital jungle and finish presenting a solution proposal, now that it is outside the Union European but with similar problems.

Everything indicates that the repeated complaints of the operators to receive fair treatment from the regulators will be heard. The difficult thing will be to find the difficult balance that leaves everyone, starting with consumers and companies using the Internet, as least dissatisfied as possible. The deployment within a few months of the laws of services and digital markets in the European Union (the DSA and DMA) may be a way to rebalance the situation. It will be one more, and equal in importance, of issues that must be addressed urgently in the European Union.