The European Commission has published a report on the foreseeable development of the 5G market in Europe towards the end of this decade. Four possible scenarios are envisaged, all of them problematic, from when the situation evolves without major changes or disruptions until large technology companies dominate the supply and the market throughout Europe, with the intermediate pathways of a slowdown in supply or the emergence of networks open out of the reach of incumbents. No figures are given, because it is a prospective analysis of what could happen.

The European Commission report on the trends of the foreseeable evolution of the supply of 5G networks in Europe towards the end of this decade is quite extensive, 110 pages long, although an executive summary of around ten pages has also been published, in English and French.

The analysis offered of the current situation of supply and 5G technology is detailed and based on this, four plausible scenarios of the development of the 5G market in the European Union are identified, both for the supply of equipment and services, towards the end of this decade. This European Commission report, dated August 9, is part of the studies that explore, document and analyze issues of digital policy and has been prepared by the Austrian institute of technology AIT, Fraunhofer ISI, IMEC, RAND Europe and the consultancy Arthur D. Little.

The use of 5G should be promoted in the EU, with a safe and open ecosystem for all operators, and the digital autonomy and European technological sovereignty should be ensured, with the collaboration of new and traditional suppliers.

The first of the four anticipated scenarios is that current incumbents will continue to develop the 5G ecosystem at a rate similar to that of 4G; The second predicts that the increased competition and the few business use cases offered and demanded 5G will cause a contraction of the market and less deployment of 5G networks in Europe; the third estimates that the appearance of open link networks will profoundly alter the current network offer, with new players and greater competition in the market, and the fourth that the progressive and rapid introduction of large technology companies in the European market will make to increase their dominance in the offer and provision of services in Europe.

Based on the impact of these four analyzed scenarios, in which none of them does the European 5G market very well in the near future, the study establishes the need to facilitate the evolution of a viable 5G ecosystem throughout the European Union in the long term , which requires a combination of policies oriented towards this ecosystem, with the aim of mitigating the risks presented by each of the four scenarios described and maximizing the opportunities they present in the long term.

The policy measures outlined in the report and which should contribute to strengthening and expanding the development and use of 5G networks in the European Union are, on the one hand, the development of a secure and open 5G ecosystem across Europe for telephone operators. mobile, incumbent operators and new European software vendors and providers, including open software development communities, as well as users and vertical industries.

On the other hand, European autonomy in digital matters and its technological sovereignty should be strategically ensured, through active collaboration between new and traditional suppliers, in addition to a well-supported strategy towards open specifications in the 5G ecosystem.

The study aims to contribute to a better understanding of the different initiatives that can be carried out to achieve an open and disaggregated telecommunications network infrastructure, as well as their impact from different technical and geopolitical angles. The European Commission, by presenting this study, hopes that it will help to achieve greater political support in the future on this key issue of 5G telecommunications and allow the European Commission to take better measures to strengthen the European 5G ecosystem.

The study identifies eight key trends, which will decisively influence the future development of the 5G service offering in the future. Each of these trends will have a high impact on the 5G offer, but their development also involves a high level of uncertainty.

Open and interoperable network solutions, with the opening and virtualization of link networks and the development of a new fully virtualized backbone network architecture, is one of the great trends that are set for a more or less long future, with the desire to replace closed network architecture with more open ones with modular interfaces.

This trend towards open, unbundled and virtualized networks represents a great opportunity for new players who want to offer their telecommunications services in Europe, thus increasing the diversity of providers and the greater speed of development and competition in the market. But, while interoperable and open network solutions present benefits, the study highlights the important trade-offs in terms of performance, costs, network efficiency, cybersecurity, diversity of providers and overall reliability of services, topics that are reasons controversy among 5G specialists.

Linked to the above, open networks will facilitate the entry of new providers into the 5G service offering. Although new conditions and demands may be established for these new open network providers, it will not necessarily be an impediment, because new providers may emerge from already established companies with strong competencies in hardware, baseband provisioning or software services, or from other sectors and start-ups.

One problem with the development of the European 5G market is that the level of investment by current operators is low when compared to international standards, which is why it is advocated to encourage greater investment and thus promote innovation in European 5G networks . Political and financial support for new initiatives that want to enter the European 5G market could increase the diversity of service provision but, even if the report does not say so, this would make it more difficult for established providers to amortize new investments than They will be carried out.

As Thierry Breton, Commissioner for the Internal Market, has sometimes pointed out, you cannot be naive and demand reciprocity in any case. That the EU cannot be “naive” with the United States is a term that Emmanuel Macron, president of France, has also used in relation to the Pittsburg summit.

Another trend highlighted in the report is that, traditionally, public initiatives in the telecommunications sector have been done on a national scale, therefore a greater degree of cohesion on a pan-European scale of public initiatives in the sector is recommended. Recent measures of the European Union, such as the Public-Private Alliance of 5G Infrastructures (5G-PPP) or the joint proposal of intelligent networks and services towards 6G (SNS JU) are measures that can reverse the action on a national scale by other more European .

Community-level development of vertical markets and industries is another trend mentioned in the report, such as the security challenges posed by 5G networks. Finally, another trend mentioned in the report is the need to promote universal standards and open specifications, while respecting essential patents. The following graphic is attached to the report, with the potential threats posed by the development of 5G networks. 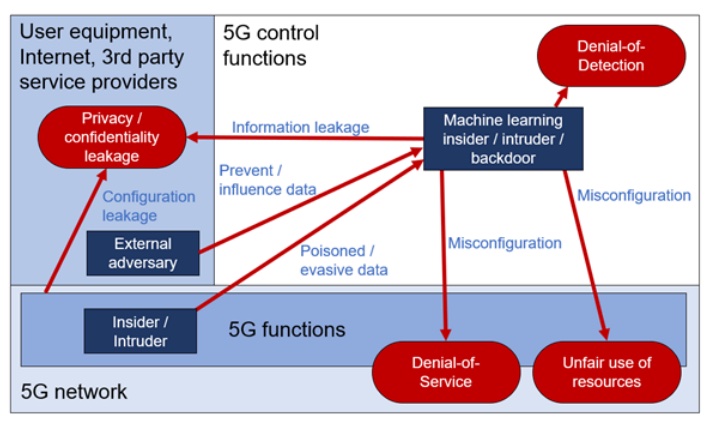 Scenarios with advantages and disadvantages

The four scenarios that the report describes are feasible to a greater or lesser degree, and all have various advantages and disadvantages, none of which is fully desirable. The first scenario, that incumbent operators will lead 5G, or the second, that the deployment of 5G will be slow in Europe, are those that have the greatest possibility of being a reality in the short and medium term, according to the report. The third scenario, that open RAN will change the rules of the game, or the fourth, that Big Tech will take over a large part of the European 5G market, looks more feasible, in any case, in the medium or long term.

The first scenario is, in principle, the most desirable, because it leaves things more or less as they are and the development of 5G follows the course of the previous generation, 4G. Mainstream and virtual operators are relatively comfortable because they can plan their investments and introduce new services as they become demanded and demand pushes for more innovation.

The second supposes, in some way, a closure of the Community borders to new competitors and the established operators do not feel the need to make greater investments than the presumably profitable ones. This would cause a slowdown in the deployment of 5G, as in fact is already happening in Europe, and a low development of innovative services due to the lack of infrastructure or low demand due to lack of stimuli.

In any case, it is not foreseeable that the first or second scenarios will be strictly fulfilled, precisely because of the numerous trends in the opening of the existing markets listed above and that, in practice, cannot be completely ignored or avoided. Sooner or later, and to a greater or lesser degree, either of the two previous scenarios will contain parts of the other two scenarios.

The trend towards open link networks seems unstoppable, although experts leave it until the end of this decade or even the next, and the entry of large technology into the 5G market, mainly in the United States, is becoming more and more feasible, at least from the hand of the dominant operators. Increasingly, European incumbents are signing agreements with technology companies to manage remote information services for them, through information clouds and artificial intelligence processes owned by technology.

The challenge facing the European Union to establish a viable and equitable 5G service supply ecosystem is colossal, because it requires, as the report points out, a combination of political measures oriented towards the development of the systems but with the need, on the one hand , to mitigate the risks of the scenarios proposed and, on the other, to promote the development of opportunities for all in the long term.

The telecommunications regulatory framework is a great tool to promote the development of innovative services that drive demand and create an efficient network and service infrastructure that is profitable for operators. The telecommunications sector has always been highly regulated and the pace of innovation and infrastructure development has remained at a very high level in Europe, but the threats looming over the sector in Europe are greater than ever and the risk of missing opportunities too.