Subscriptions to 5G mobile networks will experience strong growth over the next six years, during which time 5G technology will reach maturity and be used extensively by consumers and businesses. Ericsson predicts that there will be 4.4 billion 5G subscribers by the end of 2027, compared to 660 million today, which is 70% concentrated in China. Data traffic through smartphones will continue to grow at a spectacular rate: from the 11.4 GB per month now supported by mobile networks, it will rise to 41 GB per month by the end of 2027, Ericsson calculates in its recently published mobility report.

It has now been ten years since Ericsson publishes its Mobility Report at the end of each November, with regular updates in the spring. During these ten years, from 2011 to 2021, mobile phone networks have grown exponentially, both in supported data traffic and in connected terminals, basically smartphones. In these ten years, data traffic on mobile networks has multiplied by 300 and 5,500 million new subscriptions have been added, of which 4,700 million have been 4G, the Ericsson report confirms.

This unusual growth in traffic and in terminals connected to mobile networks has been due, almost entirely, to the appearance, development and consolidation of 4G mobile technology, which has occurred precisely over the last ten years. It should be remembered that in 2011 there were 720 million smartphone subscriptions, but half of them were 3G smartphones and the other half 2G smartphones, because the number of 4G smartphones ten years ago was insignificant, only nine million units.

The increase in the use and availability of one’s own smartphone has been so rapid in the last ten years that it is not aware that in 2011 the vast majority of data traffic on mobile networks came from laptops and tablets, thanks to the integrated connection, and that a very small number of users generated a very high proportion of mobile traffic.

This was so because 3G smartphones were hardly useful for transmitting data and, in addition, it was very expensive to do so. And let’s not say 2G mobiles, which were used only for telephoning and sending SMS. In its time, the move from landline to mobile and the ability to make and receive calls without being in a fixed location was a crucial advance, but now it seems that its performance was negligible.

Mobile phones were used in the nineties to call, send text messages with some sporadic images of poor quality and little else. Mobile phones were not democratized until the turn of the century. Average data usage per smartphone in 2011 was 330MB per month, equivalent to a single medium-quality image today.

4G changed the mobile landscape in the past decade

It was with the introduction of 4G technology, which began to be installed in 2009 and took off from 2013, which caused that at the end of the first decade of this century mobile phones became an essential element and were used at all hours and in multiple circumstances: to check e-mail, take and transmit images, consult and send messages anytime and anywhere, and also make and receive calls.

4G technology was truly disruptive. Not only because of its advanced features compared to 3G, such as permanent Internet connection and high-speed browsing, but because it was a universal standard: you could use a 4G smartphone anywhere. Voice and data rates became affordable, as did terminals. This caused that they went from 720 million mobile subscriptions at the end of 2011 to 7.300 million at the end of 2016. It was a truly prodigious five years. 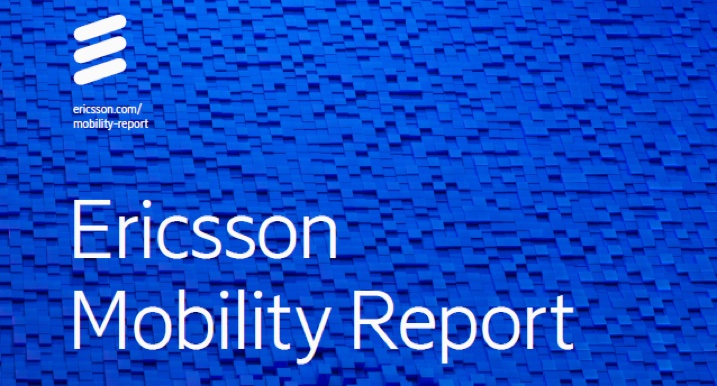 In those five years, as seen in the bottom graph of the latest Ericsson mobility report, the number of mobile subscriptions increased tenfold. However, at that time 4G technology was far from being the majority. The graph also shows that, at the end of 2016, 2G mobiles accounted for about 40% of the total and 3G and 4G mobiles shared the remaining 30%, approximately equally. An increase that has not been compared: during the next five years, to date, the increase in mobile subscriptions has been moderate, from about 800 million, to the 8.100 million calculated by Ericsson.

4G technology was truly disruptive throughout the past decade, both in the number of smartphones and in their use; It remains to be seen if 5G will be a simple evolution of 4G or will it really lead to the predicted business digital transformation

In the last five years, 4G has become the predominant mobile access technology. The new connected smartphones were 4G, while 2G and 3G became residual, especially in more developed countries. Now, according to Ericsson, there are 1.2 billion 2G, 1.5 billion 3G, 4.74 billion 4G and 660 million 5G mobile connections. Of these 8.1 billion mobile subscriptions, 15% are 2G, 19% 3G, 59% 4G, and 8% 5G. 4G technology is by far the predominant technology today. 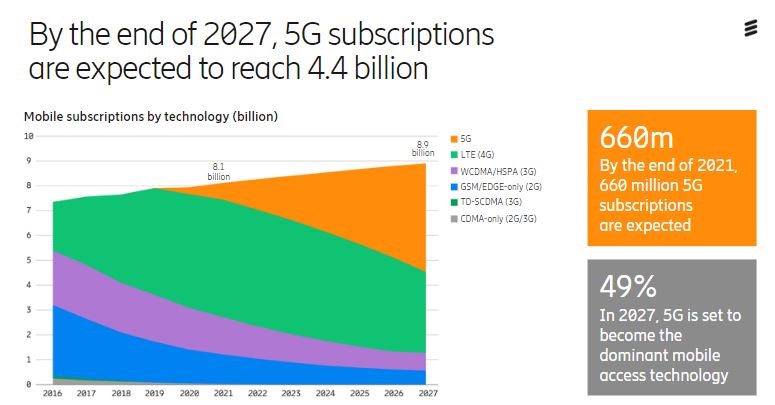 As happened a decade ago, when 4G technology appeared, now 5G technology is emerging, with even greater force, to the point that, in just over two years since its commercialization began, a total of 660 million 5G smartphones, as the Ericsson report says and which coincides, in round numbers, with those expressed by other consultancies.

The penetration of 5G, faster than 4G

The pace of introduction of 5G subscriptions is expected to be significantly faster than 4G and well above Ericsson’s own expectations in previous years’ reports. It is estimated that five years after the first deployment of 4G networks there were half a million 4G subscriptions, while Ericsson estimates that there will be 1.75 billion 5G subscriptions within the same five years from their first deployment, as seen in the graph below. Ericsson attributes this acceleration, which has been much higher than its estimates of a couple of years ago, to the rapid deployment of commercial 5G networks, especially in China and other Southeast Asian countries such as South Korea and lately Taiwan, and also to the high and early availability of 5G smartphones at an affordable price. 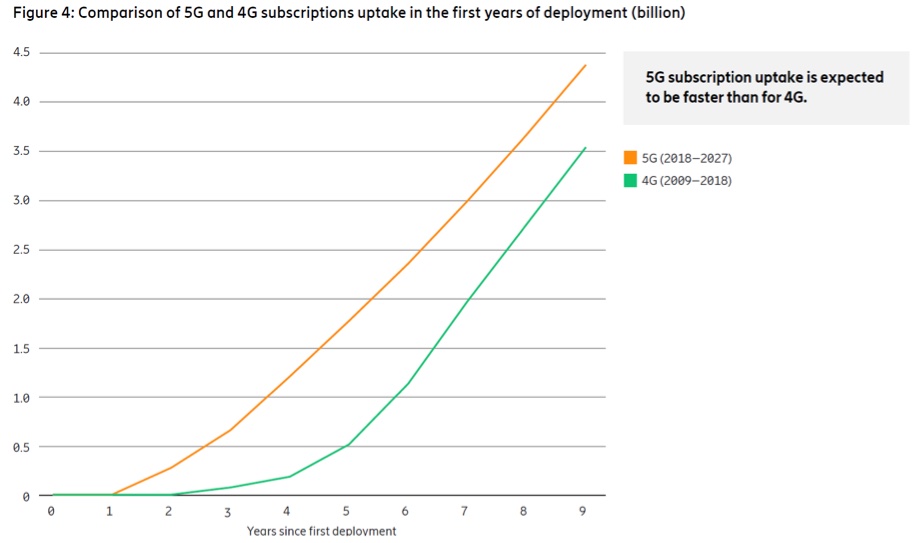 Fixed access connections with mobile networks (FWA) will grow considerably in the next six years, on average 17%, but will reach 230 million, 3% of the total (in purple). There will be more users subscribed with more than one smartphone than subscribed with a laptop or tablet or with an FWA connection. For all intents and purposes, the smartphone is, and will continue to be for the foreseeable future, the great architect and main promoter of mobile telephony throughout the world. 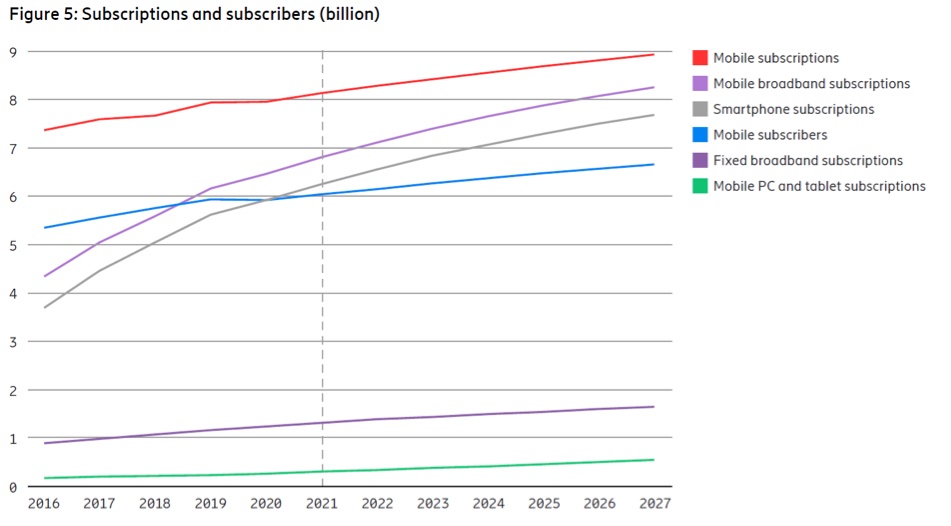 Substantial changes in the coming years

Although, at a global level, the major trends in the evolution of 5G technology are clear, as reflected in the Ericsson report, many doubts remain regarding the availability and use of 5G terminals in the short term in different regions of the world, especially in highly developed countries. And, if you look at the current distribution and that planned for 2027 of 5G subscriptions in different regions of the world, the imbalance in favor of Northeast Asia is absolute.

Southeast Asia currently concentrates 78% of all global 5G subscriptions and China, in particular, 70% of the total, as seen in the lower graph of the Ericsson report. And that the current calculation of 80 million 5G subscriptions in the United States is quite debatable, because almost all are from T-Mobile US, which work in the lower part of the spectrum, at very low speed, comparable to 4G, while in Asia they are mostly 5G in the 3.5 GHz band.

As Asia grows nonstop in 5G technology, Western Europe, which had always been the global standard-bearer in previous generations of mobile phones, is lagging far behind in terms of coverage and subscriptions for new access technology, with 31 million 5G subscriptions, as seen in the table. And in Central and Eastern Europe it hardly figures, even its number of subscriptions is below that of sub-Saharan Africa.

The key lies in the strong development that will take place around the world in 5G technology towards the middle of this decade. Because the Ericsson report forecasts strong growth in the coming years, especially in Western Europe and North America, as well as in the Gulf countries and obviously Northeast Asia, with the figures expressed in the table above for the end of 2027. According to how If 5G networks, their coverage and 5G subscriptions take off in the next three years outside of Asia, and especially in Europe, the situation in different regions of the world may be very different from today.

One need only see, for example, that Ericsson predicts that by the end of 2027 there will be more 5G subscriptions in India and Nepal, 500 million, than in all of Western Europe, which would be 430 million. India’s high population makes this forecast highly feasible, but it would be somewhat concerning if by the middle of this decade, rather than the end of 2027, India’s 5G subscriptions were also higher than those in Western Europe, because it would indicate that Europe is losing a lot of weight in the world concert.

The problem, in any case, and especially for the European Union as a whole, is not so much that there are more or fewer 5G subscriptions in a certain region compared to others, but rather the use made of 5G technology and the quality of the connection. . Because if 5G smartphones are used like 4G to navigate and take photos, it will be possible to cope with the expected increase in data traffic in the coming years but it will do little to carry out the much vaunted business digital transformation.

It should be remembered that 5G is not only a mobile technology that can allow, over the years, to save energy per gigabyte transmitted or send and receive data at a higher speed with the use of the priority band for 5G indicated by the European Union (3.5 GHz ) but, above all, that it should offer business services that make its companies more competitive.

In the European Union, the deployment of 5G technology is not, for the moment, a high priority if one takes into account that there is a great capillarity of fiber optic networks, especially in Spain, to have a very high-speed Internet connection. In these times of pandemic, the Internet connection is made from a fixed site, mostly with fiber optics. In many other countries, especially in Asia, the laying of fixed networks is very low, which has made mobile technology essential to connect to the Internet.

For this reason, it will be necessary to pay attention, in the coming years, not so much to the widespread proliferation of 5G networks but to the situation of private 5G networks and in areas where the very fast and low latency connection that 5G allows will be necessary. , due to a high concentration of companies that require adequate 5G mobile services. The specific situation of the different European countries in 2024 and 2025 in terms of coverage and the speed and latency of 5G networks will be an important factor for the competitiveness of the European Union during the second half of this decade.