On February 22, the auction of the 20 megahertz of the average 3.5 GHz band that remained to be awarded and occupied by Defense is scheduled to begin. After the tender, which will be attended by Telefónica and Orange, this medium frequency band will be reorganized so that all operators have contiguous blocks and a high-speed 5G network can be deployed more efficiently that nowadays. Throughout the next month of March, it is expected that the 700 MHz frequencies will be auctioned, with which by the summer another large part of the national territory will be covered with 5G networks at lower speed.

At present, Orange has 100 MHz, Telefónica and Vodafone each have 90 MHz and MásMóvil 80 MHz, all in the 3.5 GHz medium band (from 3,400 to 3,800 MHz), which is considered a priority throughout Europe and Asia. for 5G, because it offers the best combined transmission speed and signal coverage performance. Next Monday, another 20 MHz will be auctioned, in two 10 MHz blocks, with the clauses and conditions of the Order of December 21.

In the 700 MHz 5G band, populations of more than 50,000 inhabitants will be required to have half covered within one year of being licensed and complete within three years, although no minimum speed is contemplated

Telefónica and Orange have decided to attend this auction next week, with a starting price for a 10 MHz concession of 21 million euros, which will be valid until December 2038. When completed, this entire band will be reorganized average frequencies so that the four operators have contiguous blocks. Until now, only Vodafone had contiguous blocks, which is what made it the first operator to launch 5G services in Spain, in June 2019. The rest of the operators did so last September, although in a very limited way, precisely because It did not have continuous blocks and the radioelectric spectrum granted could not be used efficiently.

When the auction has concluded and the entire spectrum of the 3.5 GHz mid-band has been reorganized, the four operators will be able to launch a more effective and efficient launch of high-speed 5G services. After successive delays due to the pandemic, Roberto Sánchez, Secretary of State for Telecommunications and Digital Infrastructures, declared to the EFE Agency that the 700 MHz band is expected to be auctioned next March, once the 19 have been analyzed and resolved. Allegations submitted to the bidding conditions published last December, allegations that could be submitted until January 17.

The frequency band from 694 to 790 MHz, which was operated by digital terrestrial television (DTT) service providers, had to be released before June 30 to be occupied by 5G services, but the pandemic delayed the process of release until October 30. It will finally be next month, if everything goes as planned, when it will go up for auction, specifically the paired band from 703 to 733 MHz and from 758 to 788 MHz, as well as the band from 738 to 753 MHz for only uplinks. Predictably, 5G services in this low frequency band can start immediately before or during the summer, which will complete 5G services in the reorganized middle band in the coming weeks.

The problem with 5G when it comes to marketing it is that there is not a single network with similar features, as happened with 4G and 3G, but several, depending on the transmission frequency, signal coverage and penetration

The auction will consist of five blocks totaling 30 MHz paired (blocks A to E, with 60 MHz in total) and three blocks of 5 MHz only downstream (blocks F, G and H), with a twenty-year concession without extensions nor automatic renewal. The most interesting block is block A, with a starting price of 340 million euros and 2×10 MHz, as indicated in the lower graph included in the tender, but also with higher coverage commitments. The four 2×5 MHz blocks will have a starting price of 200 million euros each and the three 5 MHz blocks, only downstream, will come out for 10 million euros each. 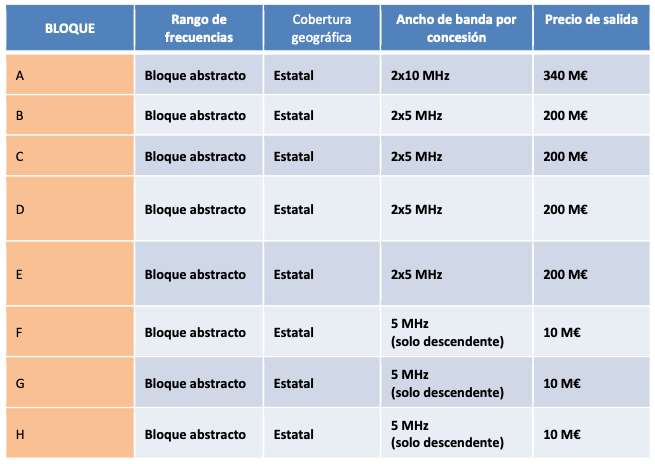 The starting price of the eight blocks in total is 1,170 million euros, which the operators consider high and that it is not ruled out that it can be changed when the final bidding rules are set. The published bases establish the obligation to offer total coverage in populations of more than 20,000 and 50,000 inhabitants in three years, according to the block, which the operators also consider excessive and have requested in their allegations that it be extended to five years, proposal that is also being studied.

Minimum coverage terms to be achieved are also established. For all towns with more than 50,000 inhabitants, half of these towns must be covered in the first year of the concession, 75% in the second year, and all in the third. For block A, at least a quarter of the populations with more than 20,000 inhabitants must be covered in the first year, 60% in the second, and all in the third. In addition, in general, all provincial and autonomous community capitals must be covered, even if they do not reach 50,000 inhabitants, and all state or regional motorways, dual carriageways and multi-lane highways and AVE stations.

The Strategy for the Promotion of 5G Technology has a public investment of 300 million in the General State Budgets for 2021 and 2,000 million euros until 2025 in order to deploy these networks, “which will be decisive to drive the digital transformation and contribute to improving the connectivity of rural areas ”. The Strategy has a specific document, 84 pages long, with different lines of action.

The 3.5 GHz medium band, as it has been considered since the 5G generation of mobile services began to take shape, is the priority, because it allows data to be transmitted from the antenna to the terminal at high speed and with a degree of coverage important, especially in outdoor areas. For areas with lower population density, the ideal band is the 700 MHz that is going to be tendered because, although the transmission speed is much lower, similar to 4G, with few antennas a much larger area is covered and, in addition , the signal penetrates better in opaque areas and through the walls of buildings.

In large cities, with a very high density of mobile users, it will be necessary in a few years to resort to the 25 GHz band, also known as microwave, as the 3.5 GHz band is saturated. The 25 GHz band will also be interesting to provide coverage in specific areas at very high speed, such as private networks in very localized industrial environments or in places with a high concentration of users and machines that use wireless data services.

In any case, in Spain, as in the rest of the Eurasian continent, it will be the combination of the bands around 3.5 GHz and 700 MHz that will offer 5G mobility services, with increasing speed and coverage, as they improve. radio link equipment and there is a greater profusion of antennas.

One of the problems that telecommunications operators face when marketing 5G services is that not all of them have the same features, even if they are called the same. The input frequency band defines the transmission speed and range of the signal, as well as its penetration into opaque areas. The higher the frequency band, the higher the speed at which the signal can be transmitted, but the lower its range and penetration.

This means that a service called 5G, to dry, means little input, because it depends on the density of antennas in a specific area according to the operating frequency. And where the user of the service is located. The paradox can be given that a user is right next to an antenna but behind a tree and has no coverage if the signal works at a very high frequency. And conversely, that he is in an area far from any antenna, but clear and with few users, and has a good 5G service with low frequency. This makes talk of 5G at high speed or low speed or true 5G and false 5G, and with or without coverage, with all the degrees in between.

The problem is that unlike 3G or 4G, which was a relatively homogeneous service in covered areas, there are actually several 5Gs, first because of the working frequency, which determines the signal transmission speed, but also its range. and its degree of penetration. At very high frequencies, the outer wall of a building acts as an insurmountable barrier in many cases, even though the antenna is relatively close. In office buildings, there is usually a glass façade, with glass with a coating, both to isolate sound, prying eyes or reduce the transmission of heat or cold outside. These façade coatings mean that there is little coverage from inside the glazed buildings, even though there is natural light.

The commercialization of 5G services is being a nightmare when it comes to promoting them, because they cannot be generalized and sold as it was done as 4G or 3G. Of course, 5G is just beginning and, as happened with 3G and 4G, the 5G service will improve a lot over the years, especially from the middle of this decade, as it happened in the middle of the past decades with 3G and 4G. . The problem, however, is that the typical user is used to having 4G coverage everywhere and at very good speed.

If, above all, there is a price war between the different operators, both their own network and virtual ones, and 5G services are included in the package that already has 4G and with unlimited data, it will be very difficult for progress to be adequately assessed 5G as the years go by. It will not be until there are many 5G business services, both aimed at large companies and small and medium-sized industries, that 5G as a general concept will be a tangible and valued reality, as many specialists in the field believe.

Another issue, as Borje Ekholm, President and CEO of Ericsson pointed out yesterday, in a statement to the Financial Times, “it is rational that European telecommunications operators do not invest in 5G networks, because many of them have not managed to recover the capital invested” . The problem, he adds, “is that the guys who were supposed to have built the infrastructure don’t make money and it takes a lot of cost to wait” for it to be profitable.

In the final section of the newspaper, Lex, the Financial Times comments that a cynical view of Ekholm’s views on 5G’s low returns on investment is a blow to European carriers. Ericsson’s manager’s description that the European telecommunications market is not working is linked to the idea that companies do not cover the costs of capital and, consequently, do not invest in 5G.

For the Financial Times, the European deployment of 5G networks is slow, as Ekholm says, but it is not paralyzed. And he suggests the consolidation of the operators, to share investments and stop the price war that devastates the sector. The persistent fall in the price of the operators’ shares makes, on the other hand, that the purchase by private groups such as MasMóvil is financially attractive but detrimental for the sector as a whole. On the other hand, the ongoing operation to unite Virgin Media with the British subsidiary of Telefónica O2, which seems to be approved, and others more give rise to the newspaper to think that the 5G situation in Europe may be straightened out, especially with an increase in the rates and the promotion of 5G services for companies.