The expectations of the technology industry and the telecommunications market were very high at the beginning of 2022, especially thanks to the relative control of the pandemic and the expected greater implementation of information technologies and 5G networks in the West. Starting in the summer, however, the situation changed radically and now the technological forecasts for 2023 are quite gloomy, especially with regard to electronic devices, although it is pointed out that information technology and telecommunications services and software in general they will maintain relatively good health for the coming year.

Just last week, Ericsson forecast the RAN market to be flat over the next three years, despite highlighting its immense potential and strong growth in data usage around the world. A day later, on December 16, the United States continued in its protectionist spirit and approved the law that puts 35 new Chinese companies on its “blacklist”. On Saturday, TSMC CEO C.C. Wei warned that the trade tensions between China and the United States are completely distorting the semiconductor market and destroying the productivity and efficiency benefits that globalization had brought to the entire world, because “mutual trust and collaboration have disappeared.” among the great powers.

The telecommunications operators, especially the European ones, are suffering poor economic results, which cause the continued fall in the price of their shares, with high indebtedness and without the possibility of increasing rates due to strong competition and the general economic situation. Several operators have divested themselves of assets, such as part of their telecommunications towers and non-essential assets, to be able to face investments to expand broadband coverage and 5G networks without increasing debt. Nadia Calviño, the Spanish Minister of Economy, again demanded on Monday before the OECD that a tax be imposed on large technology companies for the excessive use they make of European networks, without apparent success due to the fear of some that the net neutrality.

For Ericsson, the global macroeconomic environment poses many challenges to the telecommunications sector and zero growth in networks is expected until 2025, although the essential variables remain strong

The consultancies are not very optimistic either regarding the evolution of the telecommunications market and services in 2023, at least in the West. Analysis Mason predicts that carriers need to keep cutting costs, even though they weren’t particularly hurt during the pandemic as data traffic increased, and continues to grow, due to lockdowns. The consultancy foresees that the regulators allow an increase in the rates of the European operators, and in fact it is already being done, but below inflation, which would mean a drop in connection prices in real terms.

It is imperative that investments in 5G networks and fiber networks continue, despite the slim prospects for a near-term return on investment, Analysis Mason advises. Several new digital services, however, the consultancy raises, are not giving the expected results, much less the metaverse, a technology strongly promoted during 2022 and that is causing serious problems for Meta, its main driver (it plans to invest another 19,200 million dollars in 2023). The increase in the prices of electrical energy and fiber optics does not help to contain the operating costs of the operators either, although it is essential that the networks are much more efficient and carbon-free, as they are already doing, because digital technologies thus they will have a more beneficial effect on the economy in general.

The consultancy ABI Research is not very optimistic about telecoms in 2023 either. Although telecom companies have shown lately that they are very resilient in the face of global challenges, the general increase in inflation, the war in Ukraine, the supply problems of some semiconductors and the embargoes decreed by the United States against China, the rise in transport and fuel prices and the serious problem of climate change, now beyond any doubt, may mean that this resilience cannot recover its initial state. In any case, the continued migration of many telecommunications services and part of the infrastructures of the operators themselves to the cloud, as well as the increasing virtualization of networks, can help improve the outlook, adds ABI Research, without this implying a great relief for the enormous challenges that have become more visible during 2022.

Software and services grow at the expense of hardware

During 2022, the world market for smartphones, computers and other electronic devices fell considerably, 8.4% according to Gartner’s forecast, and will remain stagnant next year, calculates the consultancy. In fact, devices and a little bit of communications services were the only ones that fell. Globally, world spending on information technology rose barely, 0.8%, and is expected to increase 5.1% in 2023, half that of 2021, when it had a very significant increase following the pandemic.

What increased the most in 2022, and will continue to do so at a good pace in 2023, are information and communication services, as well as software, as seen in the graph below. Telecommunications services fell during 2022, although they are expected to pick up this coming year. There’s a lot of talk about declining device sales, and it’s clearly important, but the global ICT market is built on services, not hardware.

Business 5G networks, managed alone or with the collaboration of operators and public networks, will accelerate the digital transformation of the companies that implement them, but they must first overcome several obstacles to extract benefits

As is clear from the table, ICT and telecommunications services represented 61% of the total this year. Software and devices contribute almost as much to the total, around 16% each, with software clearly on the rise versus devices on the decline. Data centers, an infrastructure that is not normally seen and more now that it is said that they are in the cloud, are also increasingly important in total computing, although much less than the rest (5%). These forecast data, in any case, are from October, so the figures for all of 2022 may be lower than those that appear in the table and also a few tenths at least for 2023, because the deterioration in the last four-month period of the entire economy world has been very remarkable.

Very recent, last Thursday, are the prospects for the telecommunications network market provided by Ericsson at its annual meeting with investors. The Swedish company anticipates that in the next three years the link network (RAN) market will be stagnant, with zero growth, although logically 5G networks will grow by around 11%, at the expense of 4G networks, which until last year they still accounted for the bulk of the market.

For Ericsson, the global macroeconomic environment poses many challenges to the telecommunications sector, although the essential variables remain strong: data traffic continues to grow at a good pace, and markets with high potential remain, especially India. We are still in the early phase of the transition to 5G, with 80% of the sites still to be modernized, and technological change and the new mobile generation are being slower than expected, Ericsson said in its Capital Day to investors.

Ericsson, however, is very confident with the future of 5G in the coming years. Currently, it estimates that it has around 39% of the RAN market share in billing, up from 33% in 2017, and that around half of 5G traffic is carried through Ericsson networks (in both cases with the notable exclusion of Chinese market, which accounts for more than half of the world market). In any case, Ericsson says that it is present in 137 of the 228 now commercial 5G networks.

The greatest growth in telecommunications networks will take place, for Ericsson, in networks for companies. It will be in business networks and turnkey solutions where 5G will proliferate, with deployments worldwide. According to Ericsson, the business network market will grow 7% until 2025, as seen in the graph below. Ericsson insists that 5G is still in its early stages, although it began rolling out in 2019 and should now have an overwhelming presence, seen only in China, according to official Chinese reports (China is excluded from the chart below). 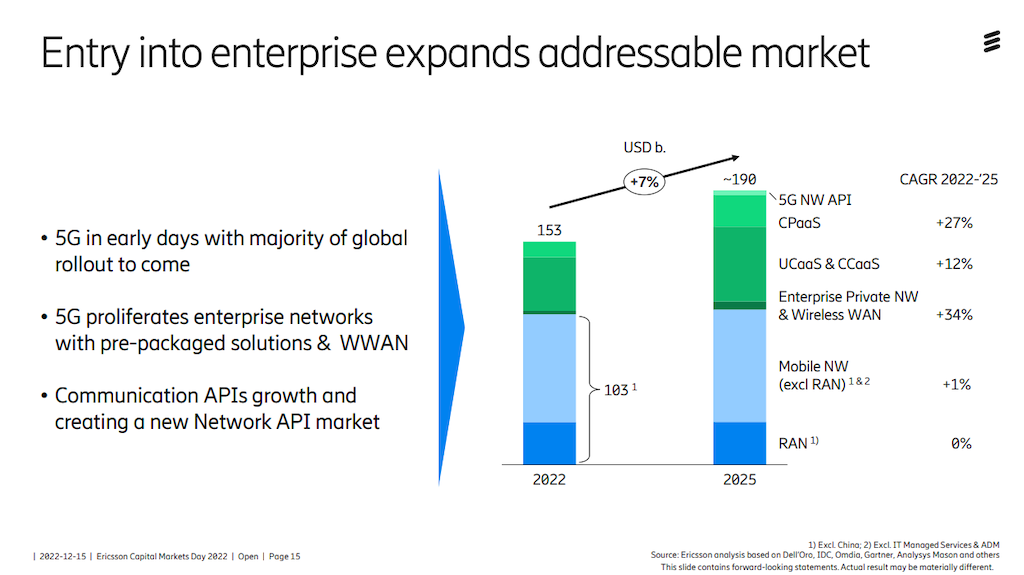 Ericsson told financial analysts that the company is undergoing a major transformation, like virtually any technology company. “We are transforming ourselves into a platform company and we plan to break even in the cloud software and services business by 2023,” he said in summary, while saying that “it will prudently manage costs, investments and income statement and will invest responsibly to preserve and improve its technological leadership, market share and profitability”.

In a meeting organized by Euronews a fortnight ago, several telecommunications industry leaders highlighted that 5G technology is deploying faster than other mobile generations, with more than 200 commercial 5G networks in the world, of which 128 are in use. Europe, in 34 markets. The challenge in Europe is to speed up these deployments of 5G networks, said Laurent Leboucher, Orange’s technology director, and the first is access to spectrum, because in Europe each spectrum requires a specific process and time for each country, apart from access to a full range of 5G devices is also a considerable challenge in Europe.

For Leboucher, the crucial benefit of 5G for operators is that it increases the capacity of networks, which in turn allows for a better user experience and more data usage. Currently, Orange 5G customers have twice the bandwidth of 4G customers, which in all cases is more than 200 megabits per second in cities. In a second, more advanced phase, 5G will allow new cases of suo, such as extended reality and connected cars, among others, added the director of the French operator.

For Philip Song, commercial director of Huawei’s enterprise network group, the global 5G ecosystem is vibrant and the world’s top twenty operators, by number of 5G stations deployed, have seen their average billing per user increase by more than 10%. According to Song, 5G has already created value for industries that have embraced it in their digital transformation. The advantage of dedicated 5G private networks is that you don’t have to wait for operators to offer it.

For Alex Sinclair, from the GSMA operators association, networks on demand (network slicing) and private networks can coexist. Most of the requirements can be done with public networks, but companies can also have a dedicated private network and establish alliances with operators or maintain it alone. In any case, the session recognized that there are three essential factors for a high takeoff of 5G: more affordable 5G devices, better network and application experience, and innovative content. Three premises that, it seems to some, are taking too long to appear, while for others it is a matter of time, because it is a very complex technology.

Apart from the multiplicity of operators that exist in Europe, and that should allow equal access to 5G to all European users, according to Sinclar, an additional problem that exists on the European continent is the evolution that it will have in the coming months (or years). ) the trade conflict between the United States and China, which centrally affects the manufacture and trade of semiconductors and the information technology and telecommunications industry.

Last Saturday, C.C. Wei, CEO of TSMC, insisted to a large group of businessmen in Taiwan that the tensions between the two world superpowers are distorting the semiconductor market and nullifying all the benefits that globalization has brought, while expressing his doubts about the benefits that may exist with the intention of manufacturing the chips locally, as stated at the beginning of the article. The demise of “mutual trust and collaboration” between the two superpowers is another very serious issue for Wei. The general impression of leading observers is that progress has been made in many positive, but also negative, technological aspects, and for now there is no unanimity as to whether the sum is positive or negative.