Ericsson has started commercializing a 5G RAN Slicing solution that will allow operators to offer customized business models to their customers with guaranteed performance. The novelty of Ericsson’s proposal for Network Slicing is that it dynamically optimizes radio resources to segment the spectrum of the access network more efficiently and enhance end-to-end management by the operator. On the other hand, the University of Vigo is carrying out a Network Slicing pilot project within the framework of the 5G Galicia Pilot, with Cisco as the main provider on the Telefónica network.

The concept of a la carte, flexible or segmented network (better known as Network Slicing) is nothing new. Nokia was scheduled to officially present a flexible end-to-end 4G and 5G network at last year’s MWC in Barcelona and last October the Finnish company announced that it would have it available by the end of 2020 throughout the link, transport and trunk network.

The GSMA, the global association of operators, had already submitted a long report on the requirements of Network Slicing use cases in April 2018. Providing business customers with a customized, flexible and performance-guaranteed network is considered one of the most promising use cases of 5G mobile technology and a business model that will help operators make profitable the deployment of the new mobile infrastructure.

“Ericsson’s 5G RAN Slicing solution dynamically optimizes radio resources to deliver significantly more spectrum-efficient radio access network segmentation,” explains Per Narvinger, Ericsson’s Network Product Manager in a statement. . “What sets our solution apart is that it empowers end-to-end management and orchestration support to deliver services quickly and efficiently,” and, he adds, “offers service providers the differentiation and guaranteed performance they need. to monetize investments in 5G with diverse use cases ”.

This Ericsson solution is now commercially available and, according to the Swedish company, allocates radio resources with a millisecond schedule and supports the management of multiple different services across different segments of the Radio Link Network (RAN ). This network segmentation supports multiple logical networks for different types of services over a common network infrastructure.

In this way, Network Slicing offers new business opportunities for telecommunications service operators through various use cases and vertical businesses. It also allows the creation of various virtual networks with specific applications and varying degrees of dependency. The important thing, however, is that this network segmentation is done from end to end, through the part of the final section of the link network but also in the corresponding layer of the transport network and the core of the network. of the operator, as seen in the following graphic. 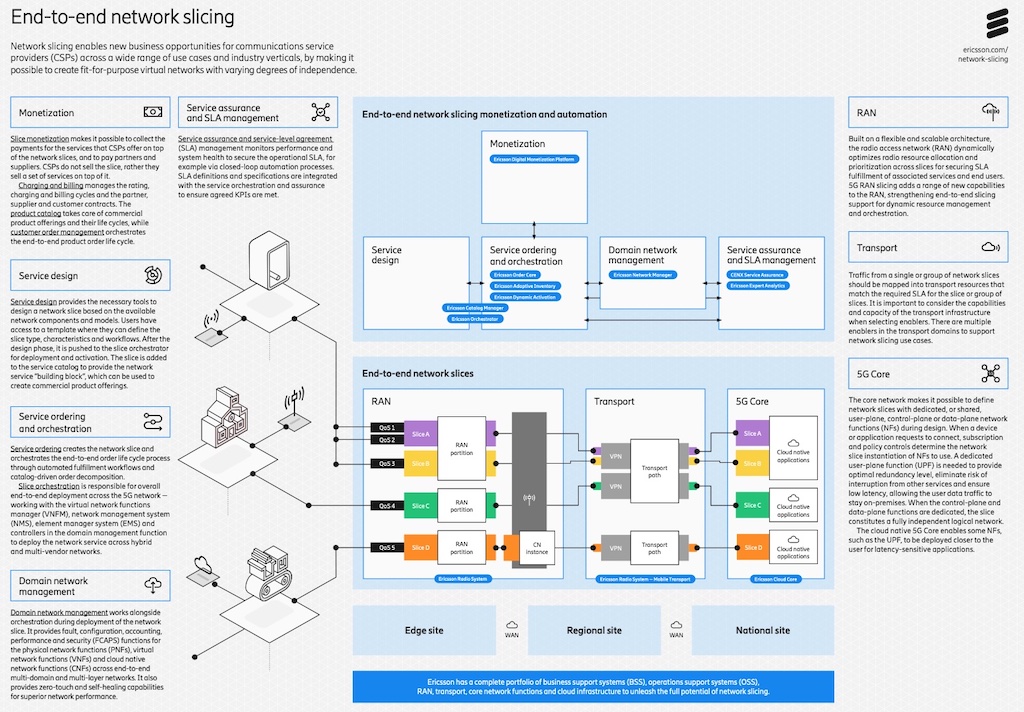 The main applications of Network Slicing and the biggest business opportunity are expected to be in the corporate sphere, although Ericsson also believes that there may be interesting applications in the short term with enhanced video and augmented reality and, in the longer term, with the car connected. In fact, the GSMA projects the global market for flexible enterprise networks to be $ 300 billion in 2025 and Ericsson estimates a business opportunity of $ 712 billion in the residential market by 2030.

Allocate resources to one user without penalizing the rest

In theory, there is no limit to the number of layers an operator can support and a layer could be allocated for a single business customer. The challenge, considers Gordon Brown, from the consultancy Heavy Reading, is to allocate resources to a user in a certain layer without affecting the overall efficiency of the cells of the mobile network of other users.

But Ericsson believes that the ability to share radio communication resources in real time solves the problem. A portion of the cell’s capacity can be taken out and treated as a separate, logical entity, says Hannes Ekström, head of 5G RAN at Ericsson. From a resources perspective, the network load for a given layer can vary from one millisecond to the next, he adds.

Although the company says its solution is commercially available, it does not name any customers in the statement. However, the opinion of some operators that have tried it is included, such as the Japanese KDDI or the Swiss Swisscom, which can be interpreted as being already customers, or that they have tried it satisfactorily. Other operators are also known to have done proof of concept, including SKT, BT, AT&T, Telefónica and Deutsche Telekom. According to Ekström, there are many interested operators.

One of the projects of the 5G Galicia Pilot initiative is a 5G Network Slicing pilot test, to demonstrate the flexibility of the 5G network to dedicate specific capacities to different services and clients

For the head of 5G RAN, Ericsson plans to offer the solution only to telecommunications operators so that they can supply it, in turn, to their business customers, thus ruling out that companies outside the telecommunications sector offer it on private business networks. As the entire process is fully automated, it is ensured that the provision of resources is consistently optimized throughout the service.

What the Ericsson solution does enable is to operate over cloud-based virtual networks, making it feasible to deploy in multi-vendor equipment environments. In the case, for example, of online games, which are typically processed in the cloud and can be delivered to user devices through an end-to-end network layer with guaranteed speed and latency characteristics.

According to Sue Rudd, from Strategy Analytics consultancy, by dynamically sharing radio resources in steps of one millisecond, optimal quality of service is ensured in real time. In addition, integrating end-to-end radio communications optimization into a virtualized link network does not lose 30 to 40 percent of spectrum that would occur in the event of strict and “hard segmentation” throughout communication. . In fact, adds Rudd, it is the dynamic real-time sharing of the link network that makes the service profitable for the operator and the user.

For Marc Sauter, head of mobile private networks in Vodafone’s business division, Network Slicing technology works as a virtual private network that uses a dedicated layer of the 5G public network. User control of this network is quite limited, because it is managed end-to-end by the telecommunications operator, although in future versions of 5G, available from next year, they will give more options to these virtual private networks and open a new market for smaller customers, according to the manager at a professional meeting held at the end of January in Bologna (Italy).

There are two other possibilities of having a private mobile network. One is fully dedicated, with the mobile infrastructure located at the user’s site. Resources are taken from the public network that are needed and from there an infrastructure for totally private use is built. Critical applications can be a typical case of this fully dedicated mobile private network.

For Ericsson, however, its concept of Network Slicing and a private network is that it is fully managed by the telecommunications operators, although the communications are strictly private. Nokia has a more flexible approach, as was made clear in the June 2019 edition of Hannover Messe, the last one held, where the Finnish company was in favor of installing network equipment for customers who want to have their own private network.

Within the framework of the 5G Galicia Pilot initiative, whose objective is to test the technology of different providers and use the results to define the telecommunications networks of the future, one of the winning projects of the first call is a Network Slicing 5G pilot test, which aims to demonstrate the flexibility of the 5G network to dedicate specific capabilities to different services and customers.

The project is promoted, like the others destined to the development of 5G, by the Ministry of Economic Affairs and Digital Transformation and co-financed by Red.es with ERDF funds. The main provider of the telecommunications infrastructure is the Cisco company, in collaboration with Telefónica and the University of Vigo.

Specifically, this initiative consists of launching a demonstrator on a laboratory infrastructure at the University of Vigo, on which three network layers or “slices” will be deployed to offer differentiated services: low latency, high width of band and network resources guaranteed for emergencies. This will allow, for example, that when using a 5G network, customers can enjoy multimedia content in ultra high definition while guaranteeing the resources of the mobile network in an emergency in the area.

With this initiative, it is also intended to start building services for customers that will be marketed through Telefónica’s 5G network. In this way, the project will allow obtaining key results that serve Telefónica to boost the ecosystem, promoting interoperability and standardization of Network Slicing technology with a view to its marketing to the end customer. Some of the sectors that may benefit the most from Network Slicing are the State Security Forces and Corps, the media and the industrial, automotive, hospitality and tourism sectors. 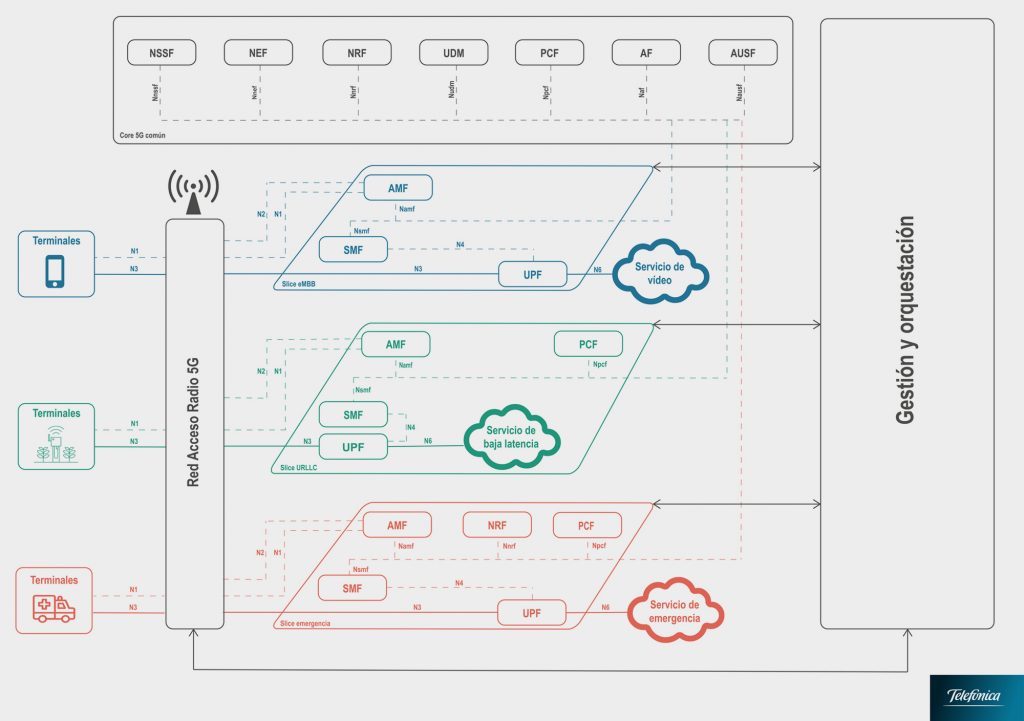 As a 5G infrastructure provider, Cisco will demonstrate the benefits of native cloud software with the Cisco Ultra Packet Core platform, which is the heart of service creation and works in conjunction with key technologies such as Network Slicing, Network Virtualization Features (NFV ) and automation through Cisco Network Services Orchestrator (NSO) to support customer-specific use cases, both enterprise and enterprise.

For its part, Telefónica coordinates the project as a provider of a technology that it considers to be one of the most cutting-edge and disruptive in the Network Slicing market and also as a promoter of the standards-based system, while the University of Vigo, as a research center with extensive experience in 5G, it works on the design and deployment of the demonstrator, its validation and performance measurement, demonstrating the benefits, quality and versatility of Network Slicing technologies.