The European smartphone market will contract by around 14% this year, remaining at around 180 million units compared to almost 205 million units shipped last year, if the evolution of sales in recent weeks continues and does not noticeable change occurs during December. At the billing level, in any case, the situation is not so dramatic, because the sale of high-end and medium-high-end models continues to be relatively high throughout Europe.

During the second quarter of this year, it seemed that the decline in sales had eased slightly in Europe, with units down 11% compared to 15% in the first quarter, but in the third quarter they fell again, 16% , even a little more than the considered disastrous first quarter, according to the calculations made by Counterpoint. For this fourth quarter, it is feared that the percentage drop will be more similar to that of the third quarter than that of the second, as the units dispatched throughout October and November are evolving.

Apple and Samsung have shipped almost eight million fewer smartphones in the third quarter in Europe, out of 40.5 million units; the Chinese Xiaomi and Realme have been the only ones that have grown

In this way, compared to the 205 million smartphones shipped throughout Europe last year, it is now estimated that it will hardly exceed 180 million units, and may even be 175 million. In the first quarter of this year, 48.7 million units were shipped in Europe, in the second 39 million and in the third 40.5 million, estimates the Counterpoint consultancy.

In any case, these are approximate figures, because it is very difficult to calculate the units actually dispatched in the period considered and those that remain in the distributors’ warehouses. It may happen that one or several smartphone manufacturers supply fewer units to distributors to reduce surpluses from previous months, or vice versa, that distributors’ warehouses are full, with unsold product, in their warehouses. The consultants take it into account, but they do not always apply all the same criteria. Hence, there are discrepancies in the data published by different consultancies, although the trend is clear and, if several quarters are examined, these imbalances are compensated. The sad reality is that we have been chaining double-digit declines in quarterly sales of smartphones in Europe, of 15% on average.

Strong falls of Samsung and Apple

As seen in Counterpoint’s table above, the drop has not been the same for all manufacturers, far from it. The highest falls, in proportion to their volume, have been those of Samsung and Apple, of 20% and 12%, respectively, in the third quarter of this year compared to the same quarter of the previous year.

On the other hand, Xiaomi has managed to grow 4% in the quarter on the continent, with sales of 9.1 million units, 300,000 more than in the third quarter of 2021. The other major Chinese brands present in Europe for less time that Xiaomi, Realme and Oppo and its associated brand One Plus, had a very different behavior: Realme grew 85% in the quarter, with 2.2 million units shipped, and Oppo and One Plus fell 61%, remaining at a million and a half units and moving from the traditional fourth place to fifth.

This has caused Apple to be relegated to third place in Europe, behind Xiaomi, when it traditionally occupied second place (in the fourth quarter of last year Apple was about to surpass even Samsung, due to the effect of its traditional delivery of new product at the end of the year and that Samsung had cleaned up its delivered stock). Another factor to take into account in the analysis is that Apple and Samsung have completely withdrawn from the Russian market while Chinese manufacturers continue to sell without problems in Russia.

The world market for smartphones will drop between 80 and 100 million units this year, out of a total close to 1,250 million units; almost half will be of the 5G type

Samsung’s market share in Europe was 33% in the third quarter compared to 35% in the same quarter of the previous year, while Xiaomi’s went from 18% in the third quarter of 2021 to 23% in the same period of this year. Apple grew slightly, from 20% to 21%, and between Oppo and Realme they continue to monopolize the 10% European share, but now in equal parts. The rest of the manufacturers reduced their share in the period, from 17% to 14%, with a 30% drop in sales, almost double the average drop of 16%.

But Xiaomi’s growth is not only due to the fact that Samsung and Apple have withdrawn from the Russian market, but also because Xiaomi’s products are highly regarded in Europe, due to their good relationship between price and performance, and especially in Spain and Europe. Italy, two markets where you want a good product at a good price. The disappearance of Huawei in Europe due to the US embargo had already led to a rise in sales of both Samsung, the traditional leader in Europe, and Apple, which went from third to second. It remains to be seen what will happen in 2023 with Huawei’s “substitute”, Honor, which bought a large part of its assets to try to get around the US embargo (despite the fact that Huawei continues to sell Huawei-branded smartphones in China, including foldable ones). .

The fight for the Android smartphone market is expected to increase this year, with Samsung trying to resist the onslaught of powerful Chinese brands, both in Europe and in other markets. This December, Samsung plans to close its smartphone factory in Vietnam for a fortnight to adjust inventory, according to Korean media, while Apple continues to have supply problems for its new high-end models since a problem was detected last month. severe outbreak of coronavirus in the factory that Foxconn has in China, where the vast majority of iPhone 14 is made. There was a rout of thousands of workers due to the threat of drastic confinement in the huge factory, which now they want to fix with the shipment of workers from other Chinese regions.

Best sales worldwide, thanks to the United States

The slowdown in smartphone sales is taking place around the world, but it is much more pronounced in Europe and China, with very similar quarterly declines. The situation is especially worrying in China, because the calculations of various analysts indicate that the Chinese market will not improve until well into 2023, around October, an eternity in these forecasts.

In Europe, one does not want to venture whether the double-digit quarterly fall will continue, or almost, in the coming quarters, but the calculations of the evolution of GDP, bordering on or entering a recession like Great Britain, do not bode well. It must also be taken into account that European users are, in general, very satisfied with the smartphones they have, so the market is purely for replacements, since a smartphone is exchanged for a similar one in price and range when it breaks down. , almost as if it were the washing machine or the refrigerator. 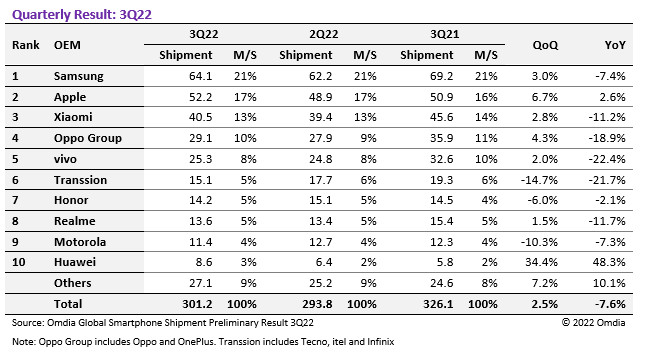 If you look at the Counterpoint table of the evolution of smartphone sales worldwide, you can see that in 2020 there was a 10% decrease, with 1,332 million units shipped in total, and in 2021 this figure increased by 1%. , with 1,346 million units, with the remission of the pandemic. But the second half of 2021 was disastrous, with quarterly falls of almost 8%, barely offsetting the strong increases in the first half of 2021. In 2022, according to Counterpoint, the first quarter began with a strong fall of 4% (it is started from an increase of almost 20% in 2020), the second has been more problematic, with a fall of 4%, the second quarter was similar to the same period of the previous year and in the third 40 million units were sold less than in 2020 (301 compared to 342 million), with a 12% drop.

Analysts estimate that in this fourth quarter there may be a decline in global smartphone sales of one digit, in the high part. If it is 6% and the 365 million smartphones shipped in the fourth quarter of last year are considered good, according to Counterpoint, we would be talking about 343 million. If it is 8%, 335 million, and 12%, as in this last quarter, 320 million. It would mean that between 1,265 million and 1,245 million would be sold this 2022 (by adding the 923 million already sold). In other words, the year will surely end with lower sales of smartphones worldwide, between 6% and 7% less, or perhaps more. Expressed in volume, between 80 and 100 million fewer units will have shipped this year.

650 million 5G smartphones, half of the total

In early November, Qualcomm projected that around 650 million 5G smartphones will be sold worldwide this year, which would mean about half of the total estimated to be sold. In the summer, however, Qualcomm spoke of 700 million 5G units and at the beginning of the year of 750 million. This gives an idea of ​​the rapidly deteriorating sales of smartphones around the world, because Qualcomm is a privileged observer of the market as a major designer and supplier of smartphone processors to manufacturers (as well as Mediatech). The Californian company ventured a fortnight ago that this year sales of smartphones could drop in percentage “a low double digit”, compared to the previous summer of “a medium digit”.

Despite the decrease in units sold, deliveries of high-end smartphones (over $400 excluding VAT) grew by 29% during the third quarter, compared to a 24% drop in low-end smartphones (less than $200), according to Counterpoint’s analysis of key Southeast Asian markets, the statement said.

Very low-priced smartphones (less than $200) are by far the most sold in Southeast Asia, but in the third quarter they fell almost three points, or 24%, compared to the same quarter of the previous year. The percentage of the medium band (between 200 and 400 dollars) and medium-high (between 401 and 600 dollars) remained similar to that of the quarter of last year (although slightly higher).

Where there is a big difference is in the sales of smartphones of more than 600 dollars (high-end), with a growth of 43% according to Counterpoint (although obviously there are few units). If this data is extrapolated to the global market, it would indicate that the average price of smartphones shipped during 2022 will have increased, although probably not enough to compensate for the drop in units. It should be noted that last year the average price of 5G smartphones suffered a sharp drop to try to encourage sales and this year the strategy has been maintained, although 5G smartphones are no longer a novelty.