The Internet services value chain continues to grow globally at a good pace, of the order of 15% per year, but this is creating serious imbalances in various sectors of the Internet-based economy, which may endanger the maintenance of a powerful and permanently improved ecosystem, according to the telecommunications operators in a report published by the GSMA, its global association. Operators are calling on global regulators and politicians to address the issue urgently because failure to do so, they argue in the lengthy report, could slow the growth of the Internet value chain and make it even more lopsided.

Since 2015, the Internet has not stopped growing at a very good pace. It is estimated that in 2020 there were about 4.6 billion Internet users, which represents 59% of the world’s population and is one of the key engines of the world economy. “The Internet transforms business models, opens new opportunities and stimulates communities around the world,” said José María Álvarez-Pallete, acting as president of the GSMA, on May 16 in London, presenting a report on the association , entitled The Internet Value Chain 2022.

The also president of Telefónica warned, however, that while some sectors of the Internet value chain are prospering, “the demands for investment in infrastructure on which these sectors are based to grow are weakening [the finances] of the Internet network operators. telecommunications”. Therefore, he added, “we appreciate the increasing recognition of this problem by regulators, so that the Internet-based economy can expand to all sectors during the next decade.”

The investment in infrastructure on which the Internet value chain is based to grow erodes the business models of the providers of this infrastructure, while the big technology companies prosper, assures the president of the GSMA

The report on the Internet value chain reveals that there are asymmetric restrictions and regulations, specific taxes for some sectors and costs associated with the licenses for the use of the radioelectric spectrum that are eroding the business models of Internet infrastructure providers , while the big technology companies prosper, stressed José María Álvarez-Pallete.

According to the study, the turnover of the entire Internet value chain has almost doubled in five years, going from 3.3 billion dollars in 2015 to 6.7 billion in 2020. Most of this growth comes from services online, with an annual increase of 19% since 2020. The payment for the provision of online services will soon exceed one trillion dollars, services that demand very high capacity from global networks. The annual growth of the number of users connected to the Internet is 7.5% and shows no signs of slowing down. Traffic per user is growing 27% annually, and almost 80% of it is due to video traffic.

The report also indicates that the return on investment made by telecommunications network operators is between 6% and 11%, a figure that they consider very low. According to this GSMA report, prepared by the consultancy Kearney, a return on capital below 10% on average is a problem, due to the pressure exerted on operators to invest in networks up to 20% of their billing.

The other problem is that most of the Internet traffic growth is coming from streaming video and music services, 99% of which are video itself; this is due to the fact that users use very high quality devices, with very high data transfer rates to have high definition signals. Video calls and video conferences by Zoom or Teams, as well as online video games, also contribute to this growth, of 16% of total traffic.

A report to focus the debate

This GSMA report is, in some way, a continuation of the one published by ETNO, the association that defends the interests of European operators, which already warned that the big technology companies occupy more than half of the bandwidth of European networks without contributing practically nothing at its costs, which made the vice president of the European Commission, Margrethe Vestager, publicly acknowledge that “the demand for a fair contribution [by the big technology companies] should be considered with great attention”.

In the ETNO report, it was clearly requested that the big technology companies should contribute part of the cost of European Internet networks, since they are the ones that use them the most and benefit from them and pay practically nothing for it. In this GSMA report, what is intended is to make an X-ray of the entire Internet value chain at a global level and to quantify its different components, in order to focus the debate and achieve a “fair and balanced contribution” of all the protagonists.

Numerous figures are shown in the report. From the graph below, taken from the report, it is clear that in the last ten years, global Internet penetration and Internet traffic consumption have grown dramatically and that today three US companies (Google; Facebook) , now Meta, and Netflix) account for no less than 45% of total world traffic. Without the traffic of these three companies and the other three that make up another 11% of the total traffic (Apple, Amazon and Microsoft), the Internet would not be even half of what it is now.

Most of the growth in Internet traffic comes from streaming video and music services, using very high-quality, high-definition devices such as televisions, smartphones, and video conferencing systems

Thus, it can be seen in the graph that Internet penetration at the beginning of the century was less than 10% with 500 million users, when at the beginning of the last decade it reached 29% and 2,000 million Internet users, for in By 2020 reach 59% penetration with an estimated 4.6 billion Internet users worldwide. Internet traffic, as seen in the lower graph on the right, has multiplied by more than four between 2015 and 2020, from 41 exabytes per month to 181 exabytes per month on average, with an annual growth, in these five years, of 34%. 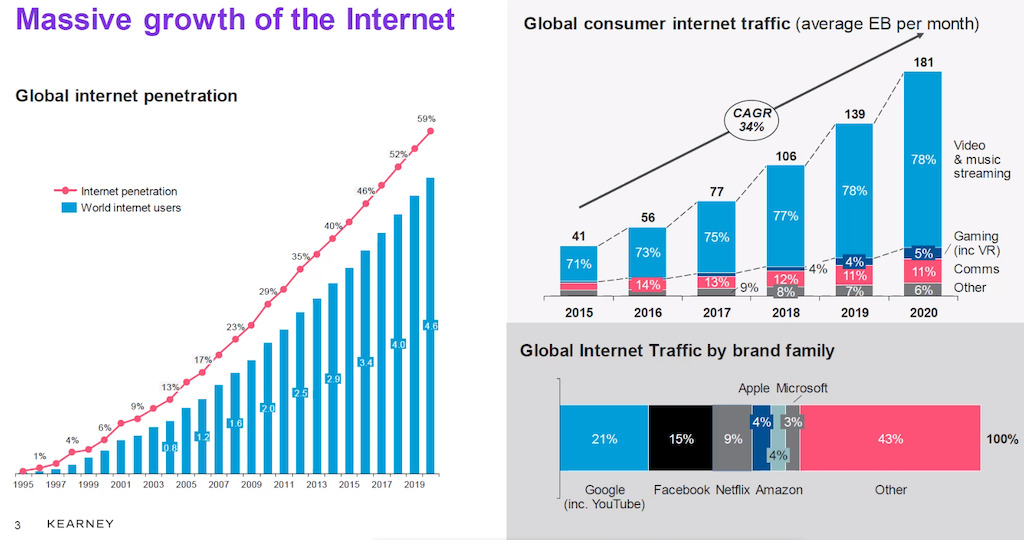 Video, including streaming music, is also seen in the graph, from 2015 to 2020 it has always represented more than 70% of all Internet traffic directed at consumers (between 71 and 78%). As this traffic, as has been said, has grown 34% annually, video alone accounts for the overwhelming amount of 141 exabytes per month on average (an exabyte is a one followed by 18 zeros, or one billion gigabytes).

The study divides the Internet value chain into five elements: content rights, online services, enabling technology, Internet access connectivity and user interface, as shown in the graph below, with a description of what each of them contains. 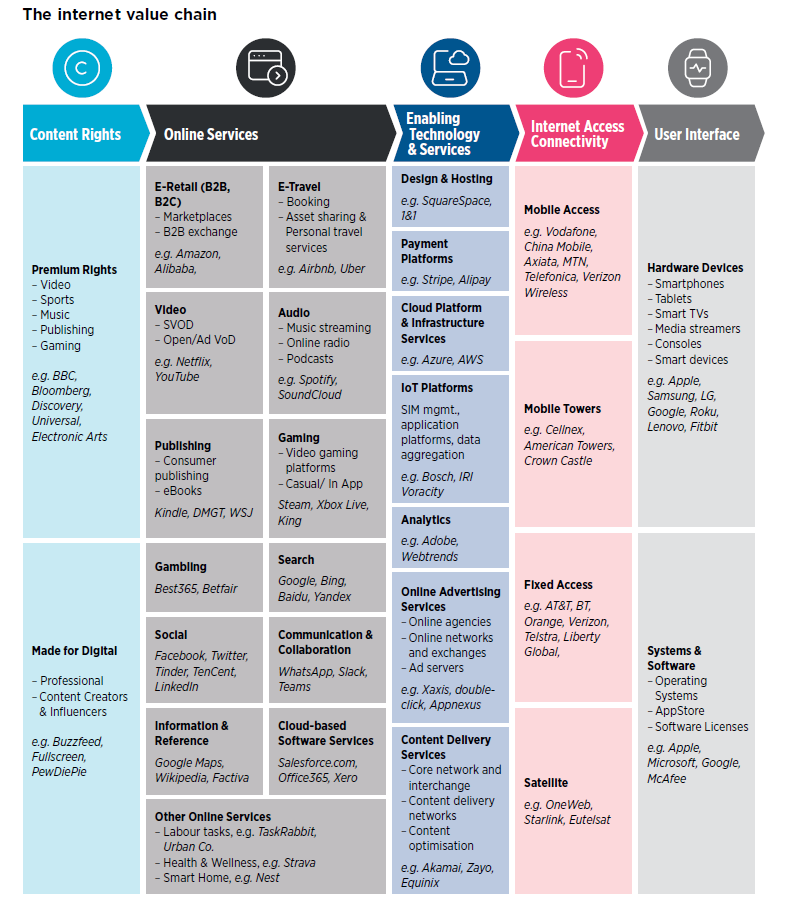 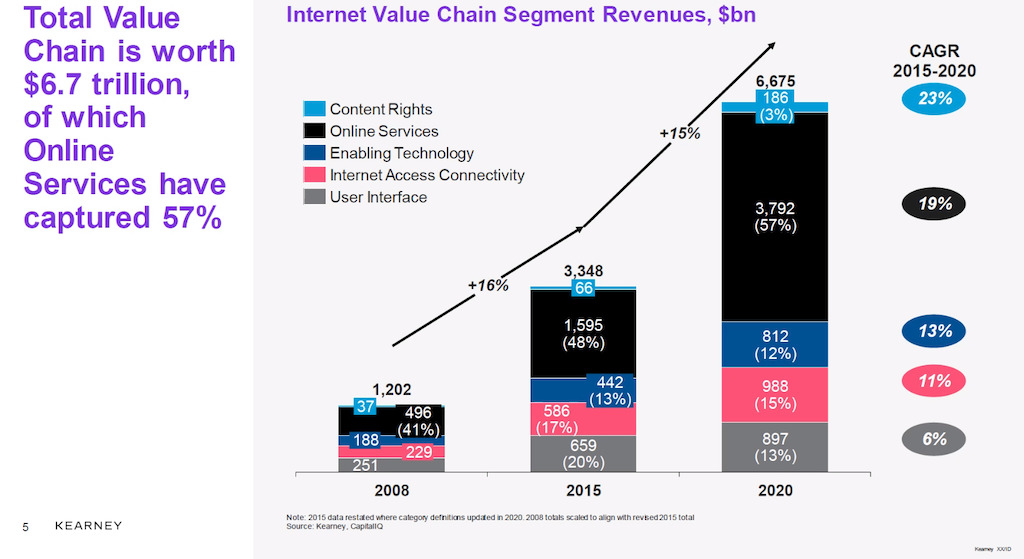 The services that have grown the most from 2015 to 2020 are content rights (23%) but, as they only represent 3% of the total, this greater increase has little influence. On the other hand, the high volume of online services, together with their strong annual growth in five years of 19%, has triggered the turnover of the total Internet value chain. The other three components of the value chain are also growing, between 6% and 13% per year, but the sum of them is much lower than online services. Their global impact is less, although still very important, because they add up to 40%.

The lower graph shows the weight in turnover of each of the different components of the value chain, represented by the area they occupy. Thus, for example, it can be seen that Internet access (in magenta) represents 15% of the total, with mobile access more than double that of fixed access and that of communication towers relatively less.

Hardware devices and programming systems represent another 13%, with hardware being the most important, close to 80%. In a similar billing order are the services that allow the Internet to work, with 12%, which includes, as seen in the graph, payment systems, in the cloud, the design and maintenance of Internet sites and others. . 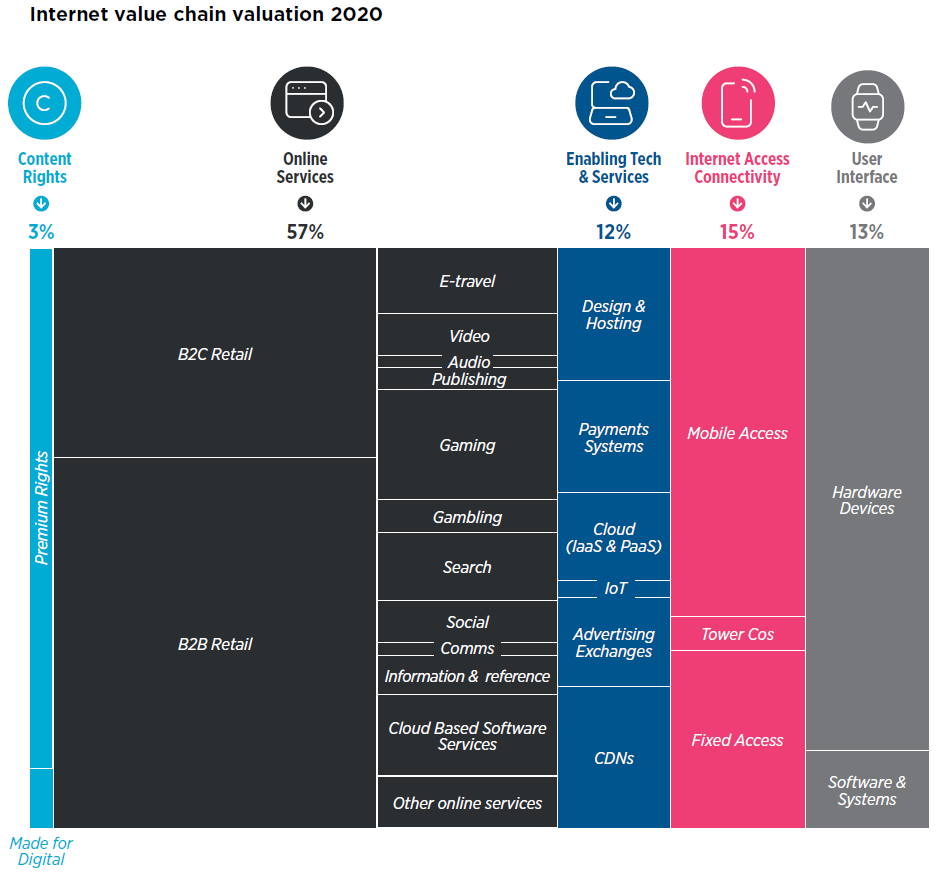 The bulk of the value chain is online services, 57% of the total, and especially B2C Retail and B2B Retail, which account for about two thirds of the total. Games, cloud-based software services, travel or search services are important, if compared to others of similar weight such as payment systems or website design and maintenance, but nothing to do with B2B and B2C provided by the technology giants, which between the six represent 57% of the total turnover, as seen in a graph above.

The situation, warns the report, is not static, in the sense that the protagonist already feels comfortable within his field of play, but that the great players expand on all four sides, throughout the length and breadth of the entire value chain.

Based on what has been described above, and which is explained in much greater length, precision and depth in the report, it happens that telecommunications operators, the telcos, feel pressured from all sides and their margins of action are reduced, while at the same time They demand greater investments with returns that are more difficult to achieve in an acceptable amount.

Above, as seen in the graph below, online services are replacing traditional telecommunications services. Meanwhile, underneath, the need for greater efficiency in operations is reducing the traditional assets of operators, be they fiber networks, telecom towers, the network core or data and information technology centers.

The result, says the GSMA report, is that more investment is needed but with less business potential. It may be more or less in agreement with the figures set out in the report and the weighting of each section, but it can hardly be denied that the Internet giants, the half dozen or at most a dozen giants, are not contributing equally in the participation of the Internet ecosystem, an argument that was already present in last month’s ETNO report, focused especially on Europe, and that has now been extended to a global scale.

Although it seems that these colossi have everything to gain, in recent weeks they have received serious warnings from the markets, with sharp falls in the stock price, the most spectacular being the cases of Netflix or Meta. And also from the highest levels of the US Administration, these practices are being investigated in case they could constitute an abuse of a dominant position and be undermining not only European competitors but also American ones, who are not big enough to compete. under equal conditions in their own national market. As in many other issues, regulatory and political action over the next three years will be essential for a fairer Internet future for all, in the broadest sense of the term.