The development of open link networks (Open RAN) continues at a good pace, as was made clear at the FYUZ meeting held almost a month ago in Madrid, although different components and platforms were announced that will not necessarily be link networks (RAN) with disaggregated components and fully interoperable platforms with each other. The initial objective of the large operators with the Open RAN initiative, especially the European ones, was to have RANs that were very competitive in performance and price with those that currently exist (mainly from Ericsson, Nokia and Huawei), in addition to facilitating management and updating. of its fixed and mobile networks in the coming years.

In the middle of last March, the large European operators expanded the priority technical requirements to advance in the development of a system of open link networks (Open RAN) that would be “fully automated and interoperable”. With these requirements and those previously published by the alliance, they considered that the security, energy efficiency and sustainability objectives that all telecommunications networks must meet, whether open or proprietary, could be achieved.

Three months after publishing these requirements, just before the summer, the i14yLAB event was held in Berlin. Petr Ledl, responsible for Open RAN research and testing at Deutsche Telekom, assured that his company fully supports the initiative of having disaggregated and open systems. in its future deployment of link networks, but that there are still many economic, technical and operational challenges to achieve it.

Vodafone will work with Nokia, NTT DoCoMo, Samsung, Marvell and Qualcomm to develop the chips and the necessary hardware and software to make Open RAN a fully operational reality.

The main problem, for Ledl, is the integration of the different systems proposed in the network architecture and the complexity that their control entails for the operators. A challenge that had already been raised from the first day and, at the discretion of the DT manager, it is practically in the same situation. Another related issue is that the Open RAN interface specifications are not mature enough, which means that many proprietary extensions are being developed in the meantime.

From October 25 to 27, the Telecom Infra Project (TIP) once again held its Open RAN Summit, together with the O-RAN Alliance, for the first time in person since October 2019. This summit, which brought together nearly 1,350 people , was made in Madrid under the name of FYUZ, which is how it will be known from now on and which is a combination of the Open RAN Summit and TIP Summit with the new Metaverse Connectivity Summit. FYUZ will be held again in 2023 in Madrid, from October 9 to 11, although FYUZ is expected to have a stand during MWC 23 in Barcelona and the latest progress in open networks will be announced. 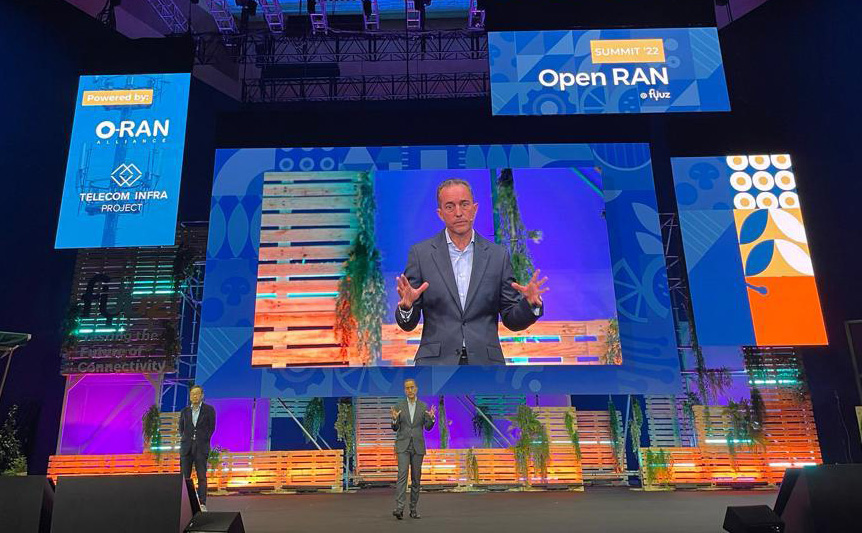 Yago Tenorio, president of TIP and director of network architecture for the British group Vodafone, announced at the inaugural FYUZ conference that Vodafone will work with Nokia, NTT DoCoMo, Samsung, Marvell and Qualcomm to develop the chips and the hardware and software necessary to make of Open RAN a fully operational reality. More specifically, Vodafone’s commitment is that 30 percent of its European sites will be equipped with Open RAN networks by 2030 and that two commercial pilot networks will be operating in Germany over the next year. This means, Tenorio pointed out, that by 2025 the developments of open networks are validated and certified, to proceed in the second half of this decade with their progressive installation.

Vodafone’s alliance with Nokia foresees the joint development of a complete solution in accordance with Open RAN specifications and incorporating an update of ReefShark, the System-on-a-Chip (SoC) designed jointly by Marvell and used by Nokia in its equipment. The new ReefShark should offer the processing power required to provide reliable connectivity in high-traffic areas, and both Nokia and Vodafone say their solution will have the same functionality, features and performance as the equipment with traditional mobile networks.

Vodafone has also signed a memorandum (MoU) with the Japanese operator NTT DoCoMo to cooperate in the development of a highly integrated and efficient open network system for the entire industry. Qualcomm has also formed an alliance with Vodafone to develop and test a 5G Open RAN infrastructure that it plans to show in Barcelona during MWC 23. In addition, the pilot network that Vodafone will install in Germany next year will use software and radio communications equipment from Samsung, which should serve for the future deployment of networks in the next two or three years.

The forcefulness with which Yago Tenorio presented Nokia’s fully Open RAN solution surprised some of the attendees, because the Finnish company had expressed doubts until this summer that it was technically and economically possible or, at least, that achieving it was a challenge. important. Even Tommi Uitto, head of networking at Nokia, was unconvinced in June about the viability of Open RAN in a conversation with Light Reading’s Iain Morris And of course, Uitto added confidently, the open alternative “will not come cheap”. .

One of the concerns of many of the companies supporting the Open RAN initiative is how open the link networks can be kept at the chip level. It is known that the vast majority of the 150 current Open RAN pilot installations use Intel’s FlexRAN reference architecture, which is powered exclusively by the US company’s Xeon Scalable chips. But it is also public that neither the operators nor the manufacturers of network equipment want to be subject to the proprietary system that Intel has traditionally had in the world of servers. 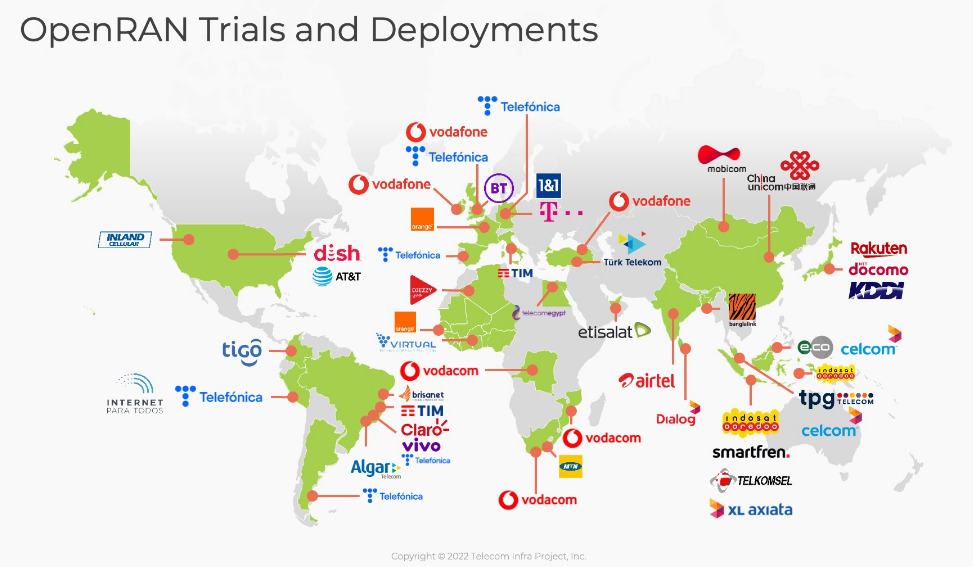 Xeon processors, like any general-purpose processor, are not well prepared to meet the performance and energy efficiency demands of a high-traffic telecommunications network. The solution, discussed at FYUZ, is to couple the Xeons with an accelerator, a specific chip that solves the most delicate and critical tasks, like graphics cards do in high-performance PCs and servers. Qualcomm, as well as Samsung or Marvell, are developing accelerators for the Intel platform. Even Intel is designing its own accelerators for its Xeons.

Intel managed a few months ago to get Rakuten Mobile to commit to using Intel Xeons for its next generation of distributed telecommunications network units on its Rakuten Symphony platform. But the CEO of Rakuten Mobile, Tareq Amin, has already made it known to specialized media that Intel is not his ideal alternative and that putting an accelerator is still a patch, although he is studying the possibilities offered by alternatives from Marvell, Qualcomm and NVidia, among others.

Intel, Samsung, and Japan’s NTT DoCoMo, NEC, and Fujitsu are also jockeying to enter the international telecommunications equipment market, with platforms that are nominally open but require very specific adaptations to function.

To make matters worse, now it turns out that Tareq Amin is upset with the free software he uses from Red Hat, bought by IBM, because it does not let him make all the changes he wants, apart from charging him a license for each CPU used in his Rakuten Symphony platform. . At FYUZ, Rakuten Mobile announced that it will replace Red Hat’s Linux operating system with free software distributor CIQ’s Rocky Linux, which includes Robin.io’s cloud automation and orchestration system, now acquired by Rakuten.

Other operators, moreover, are less condescending than Tareq Amin and Rakuten with Intel. Yago Tenorio himself told Light Reading digital media that “even if you use Intel’s FlexRAN platform, you have to design the software in a specific way and according to the set of instructions that FlexRAN provides.” And once coded for FlexRAN, he adds, “the software cannot be used for another accelerator; can only be used in conjunction with Intel.”

According to Vodafone’s head of network architecture and president of TIP, “the accelerator provides a new set of instructions and, until it is standardized, it is tied to the hardware.” This makes it necessary to have a version for Marvell, another for Qualcomm and a third for Intel, adds Tenorio. In the Open RAN laboratory that Vodafone announced last February that it will have in Malaga, it is planned to design a new open chip architecture for Open RAN, together with other industry representatives.

In any case, the situation of the Open RAN market and of Intel may change in the coming months. Intel announced in February that its new Xeon Scalable processor, the Sapphire Rapids, will include support for specific RAN signal processing and provide up to twice the capacity for virtual RANs, including 64T64R Massive MIMO.

Samsung and NTT DoCoMo, with their platform

At the moment, the main suppliers of Open RAN equipment are the Korean Samsung and the Japanese Fujitsu and NEC, the latter in the hands of the also Japanese operator NTT DoCoMo, according to Stefan Pongratz, vice president of the Dell’Oro consultancy, the reference in telecommunications equipment. Both Samsung and the Japanese companies supplied equipment only to their countries. However, in the wake of the US embargo on Huawei, and in practice also on ZTE, another big Chinese telecommunications company, Samsung and NTT DoCoMo are expanding outside of Asia. NEC is a century-old company in telecommunications components and equipment, and Samsung has won contracts for 5G equipment in the United States and Britain.

Open RAN offers them a great opportunity to gain a foothold in the international 5G market outside their countries and compete with Ericsson and Nokia. In fact, NEC is doing Open RAN projects with Deutsche Telekom, Vodafone, Orange and Telefónica, the big European operators and main drivers of the open initiative. The Japanese operator NTT DoCoMo years ago, before there was talk of Open RAN, that it was running with a great integrator of 4G and 5G solutions with equipment and chips from different manufacturers.

The main question now being raised in connection with Open RAN is not only whether there are working alternatives to the proprietary equipment of Ericsson, Nokia and Huawei, which still account for about 75% of the world market for telecommunications equipment, but to what extent? point are open and compatible with currently installed networks.

Because what the operators, especially the European ones, do not want is to move to a nominally open system but which, in practice, uses closed platforms, as many believe happens with equipment based on components and software from Intel, NTT, Samsung or Rakuten. And then there is the gigantic market of India, led by the Tech Mahindra company, which wants to be a very relevant player in telecommunications, at least in its country. Not counting the companies based in the United States, who want a piece of the pie, or those from China, for the moment silent but with tight control of their huge market.

Therefore, there are more unknowns than certainties regarding the future of Open RAN and the degree of openness and real interoperability offered by the currently proposed solutions. Open RAN has been seriously talked about for three years now and there has certainly been a lot of progress in that time, but many have the impression that there is still a long way to go and that we will have to wait for the next mobile generation, 6G, to laying solid and truly open development foundations.