The development and deployment of open, interoperable and unbundled networks, always based on international standards, is accelerating in the short term, as made clear by the main managers of the Telecom Infra Project (TIP), a community that now brings together the main manufacturers and operators of the telecommunications sector, in a virtual meeting last Tuesday.

TIP also announced that all OpenRAN projects, dedicated to the development of open link networks and manufactured with standard components and software, are consolidated into one, in turn divided into several subgroups of components and business segments, thereby deployment of open RANs can be much faster. 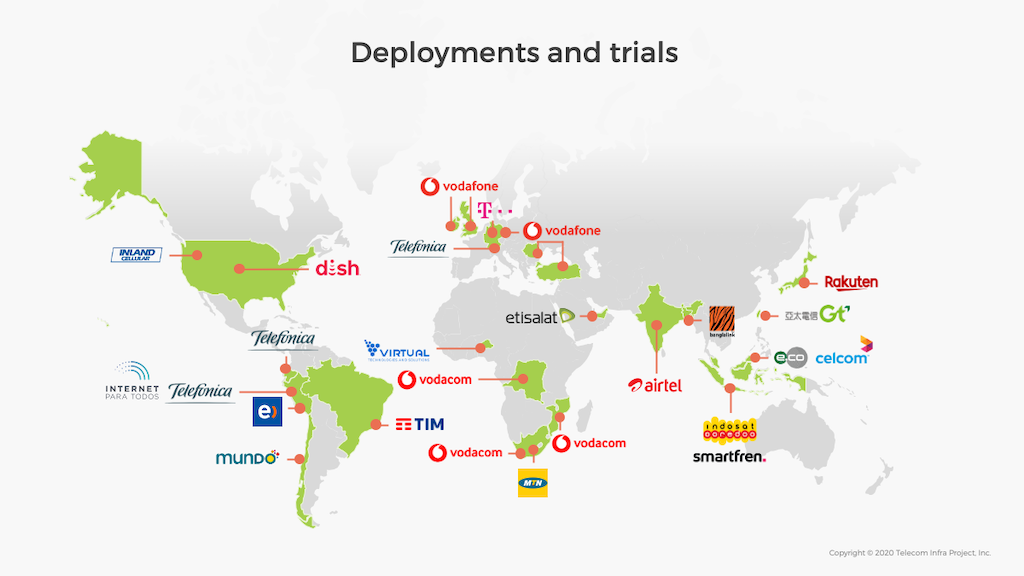 TIP is an organization created in 2016 under the auspices of Facebook, but which has now grown into a global community with hundreds of companies and organizations, which aims to create common and fully interoperable telecommunications infrastructure solutions, regardless of who manufactures the components, equipment and software used and always under the international 4G and 5G standards approved by the 3GPP, the body that develops and controls them.

Last year at this time, at the last TIP face-to-face meeting, held in Amsterdam, it was already clear that the development of open link networks (RAN) was well advanced and several pilot projects underway and successfully were even announced. , led by European operators such as Telefónica, Vodafone, Deutsche Telekom (DT) or the Italian TIM.

Yago Tenorio, responsible for the network strategy of the Vodafone group and president of TIP, even announced in Amsterdam that the 150,000 nodes of his international network were available to companies that wanted to install open RANs, according to TIP specifications. The intention was to highlight the maturity of the OpenRAN project, then known as the O-RAN Alliance, although the initiative was abandoned.

The pandemic has complicated meetings between those responsible for the different projects, but the colossal deployment carried out by the United States Administration in the last year, to persuade countries and operators around the world not to install Huawei telecommunications equipment, has caused that the OpenRAN project be energized and finally fully bear fruit.

If in recent months the role of some of the many organizations dedicated to promoting open RANs, such as the O-RAN Alliance, XRAN Forum, C-RAN Alliance and a US-led OpenRAN coalition, was not very clear, now all the works have been consolidated into a single OpenRAN Project Group, which will consist of several subgroups, as was said in the virtual meeting last Tuesday.

These subgroups created respond to the priorities of mobile operators and the demands of the market, which is to have a widely deployed 5G network with the lowest possible installation and maintenance costs to access the maximum population. Those responsible for the OpenRAN project will be the operators Vodafone and T-Mobile US, the latter now a nearly complete subsidiary of Deutsche Telekom after the merger with Sprint and the purchase of the shares owned by SoftBank. The subgroups will be co-led by BT, China Unicom, Ooredoo, Smartfren, TPG, Intel and Vodafone Idea, thereby creating a balance of power internationally and outside of current equipment manufacturers.

The task of this OpenRAN Project Group will be to “aggregate the demand of mobile operators, develop common requirements, align supplier roadmaps, lower integration costs and risks, distribute easy-to-understand operational guides, and facilitate adoption and proliferation of OpenRAN solutions ”, TIP said in a statement. Aside from simplifying 5G RAN deployments, RAN security requirements have been increased to the suppliers of this equipment.

The current plan “is for OpenRAN commercial deployments to begin in the European market at the beginning of next year,” Attilio Zani, executive director of TIP, and Yago Tenorio, president, said in the initial intervention of the virtual meeting. At present, multiple deployments and pilot tests are already being carried out, as detailed in their intervention.  A survey of 60 mobile operators around the world conducted by the consulting firm Analysys Mason released by TIP reveals that a third of the main operators and almost half of the second-tier ones expect to deploy commercial OpenRAN solutions by 2023.

The OpenRAN project is supported by multiple suppliers, both component and equipment manufacturers and software developers, in addition to the operators’ R&D centers. Some of them are quite well known because they are American and have done a lot of promotion of their achievements lately, such as Mavenir, Parallel Wireless or Alliostar, and they have important operators and technology partners in their shareholding. But in a list of suppliers that Tenorio considers that it is necessary to pay a lot of attention and with which Vodafone works, the large Japanese groups Fujitsu and NEC stand out in several subgroups, as well as Mavenir and others less known such as NTS, Comba, Airspan, Baicells, Gigatera or Xilinx.

Tenorio especially highlights Evenstar, with an initiative to build a radio station for less than $ 1,000, with four transmitters and receivers that work at a frequency of 1,800 MHz. And also Dish Network, the fourth US mobile operator created from assets segregated from the merger between T-Mobile US and Sprint. Dish’s goal, according to Tenorio, is to manufacture a standardized set for the central and distributed units that process the signals in the link networks, which is commonly called the baseband part of the network. 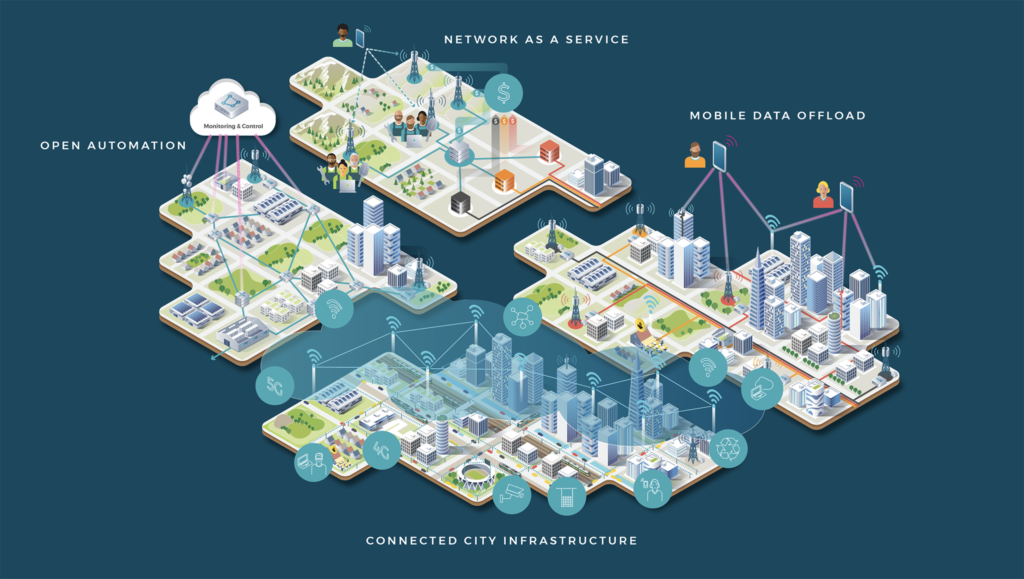 The objective of TIP and especially of the operators involved in the OpenRAN Project Group is not to limit itself to the development of an open link network manufactured with standardized components, but to move from the current situation, with fully integrated networks and from a single provider, to Disaggregated networks supplied by multiple providers. For this, the solution lies in moving from the current proprietary equipment and interfaces to fully open interfaces, as Zani and Tenorio specified in their initial intervention.

TIP has developers and vendors on a global scale and substantial progress has been made lately to become a global business reality and build open technologies across all layers of the network.

In reality, the terms “proprietary” and “open” are quite confusing and ambiguous when talking about 4G or 5G networks, because both the equipment and the interfaces as the software must always be subject to the specifications of the 3GPP, the international body that approves and approves all standards. What happens, in reality, is that there are multiple gaps in the specifications and each manufacturer of equipment and global solutions (Huawei, Ericsson and Nokia among the most important but also Samsung, ZTE or NEC and Fujitsu, among others) takes the opportunity to introduce their particular solutions.

In practice, network equipment, including RANs, are closed, but based on international standards. To further complicate the situation, most of these standards are protected by patents, essential and non-essential, of a multitude of companies, which assign upon payment of the license of use under non-discriminatory and firmly established conditions. This does not mean that conflicts of interest can be created between multiple parties, as is often the case.

Manufacturers of “closed” network equipment always argue that their complete solutions are much more efficient and interoperable because they respond to a unified strategy and that they can be easily understood with equipment from other manufacturers in the upper stages of the telecommunications infrastructure, such as always has been. Also, that when manufactured in large quantities it is easier to achieve economies of scale and recover more quickly the initial investment.

These arguments are also valid for initiatives such as TIP, based on the development of components and standardized and interoperable software with each other, regardless of who made it. The problem, in this case, is to develop specifications that are flexible and harmonized enough so that all the components fit and understand each other, within the general and detailed framework of 3GPP, as it seems that the OpenRAN Project Group is achieving.

The question now is to achieve sufficient critical mass to lower the manufacturing and development costs of the different components, with the support and purchasing power of the large operators. And that the set runs smoothly and is energy efficient when scaled up and installed in large quantities. When everything fits, in addition, it will be the manufacturers of “closed” equipment that will propose their “open” solutions, because they are also part of OpenRAN (with the exception for the moment of Huawei).

The task proposed by TIP is immense because, as it has said, it is not limited to the development of RANs but wants open, disaggregated and interoperable networks, so that they can also be virtualized and dynamically moved from one site to another based on the network needs and workload in each zone. A solution that tries, in short, to have more robust and flexible supply chains that, with the help of faster innovation, generate a better economy of networks for the benefit of all, as Zani and Tenorio said in the presentation of the TIP strategy.

To do this, they have the support of the entire ecosystem of developers and providers on a global scale. In recent months, Zani and Tenorio say, “substantial progress has been made” to be a commercial reality at a global level, build open technologies in all layers of the network (access, transport and core) and collaborate with a large number of partners across the ecosystem. The following graphic gives an idea of ​​the scope of the task, but also of the significant number and size of partners available.

TIP’s ambition does not end here, because David Hutton, chief engineer at TIP, announced the creation of a new subgroup within the packet and optical transport networks group, called MUST, to accelerate and drive the adoption of SDN (Software Defined Networking) for IP, optical and microwave transport technologies. MUST is the acronym for Mandatory Use Case Requerimients for SDN for Transport.

“We really think that MUST is the right way to push the industry in the same direction and achieve a more agile standardization and the implementation of an open SDN transport architecture,” said Cayetano Carbajo, director of trunk networks, transport and service platforms at Telefónica CTIO. “MUST offers an open environment for all operators and can contribute to add new use cases based on their requirements and the needs of their customers,” adds Tenorio in a statement.