China took advantage of last week’s MWC Shanghai to show its undisputed leadership in the deployment and use of 5G networks. China currently has 202 million 5G connections, according to the GSMA report presented at the event, compared to the 220 million 5G connections recorded worldwide by Ericsson at the end of 2020. The monthly rate of 5G connections in China it is of the order of 15 million, which means that China has more 5G connections in a month than all of South Korea, the world’s second largest market.

China has invested in the construction of the 5G network throughout the country 260,000 million yuan, about 40,300 million dollars, according to Liu Liehong, spokesman for the Ministry of Information and Information Technology at the opening of MWC Shanghai. China plans to go from the current 202 million 5G connections to 822 million in 2025, according to the Mobile Economy China report released at MWC Shanghai.

In total, according to the same report, China now has 1.310 million 4G connections, which will be reduced to 911 million in 2025, given that 5G connections will increase from now on and 4G are already starting to drop. 5G connections currently represent 12% of the total, while 4G connections account for 79%. This means that the 3G networks and the few remaining 2G networks connect the remaining 9%, even less than the current 5G.

The number of 5G subscriptions with a compatible device surpassed 220 million in the fourth quarter of last year, compared to 4.56 billion 4G (LTE) connections in the world

By 2025, the percentage of 5G connections will rise to 47% and that of 4G connections will fall to 53%, always according to the report by the GSMA, the Association that brings together the vast majority of the main operators from around the world . In this five-year period from 2020 to 2025, the large Chinese national operators plan to invest 210,000 million dollars in mobile infrastructure, 90% of it in 5G. This means that China will even increase its annual investment in 5G in the next five years, considering that in the past year and a half, since the 5G rollout began, China has invested in the order of 40,000 million dollars in 5G, such as Liu Liehong pointed out. 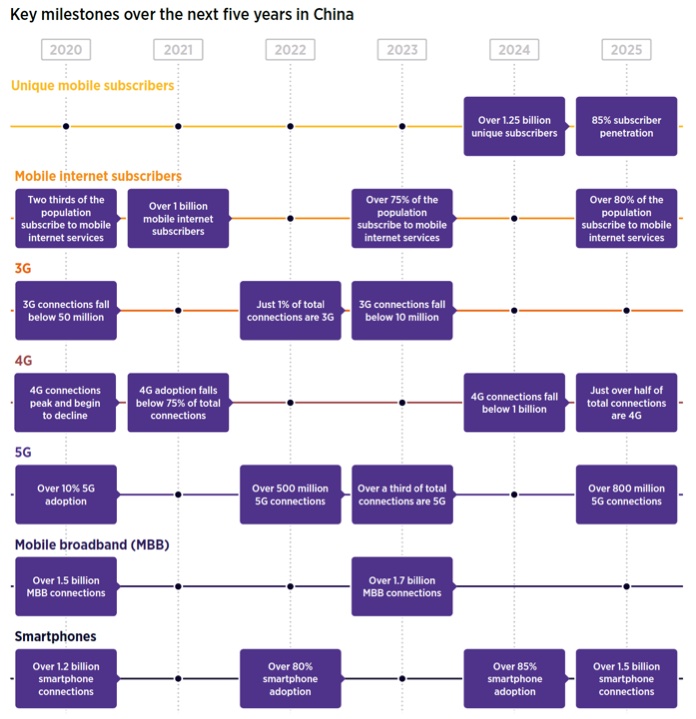 In 2022, by the end of next year, there will be around 500 million 5G connections in China, which will be 822 million by the end of 2025, as mentioned, while 4G connections, which have already started to decline due to the 5G increase, will be below 1 billion in 2024.

About 80% of 5G connections are in China

Currently, China has around 80% of all 5G connections in the world (close to 200 million at the end of February, which could be 175 million by the end of 2020 if it is estimated that these last two months have increased by 25 million, compared to to the total of 220 million at the end of 2020). This proportion will drop to 47% in 2025 and will be surpassed in percentage by South Korea, the United States and Japan, which will be, respectively, 67%, 55% and 50%, and slightly above that of Germany and Great Britain , with 42%, and France, with 40%, as indicated in the graph below.

Throughout the Asian continent there are 4.3 billion mobile connections, which account for 54% of the world total of 8 billion, while in Western Europe there are 510 million and in North America 390 million

In absolute figures, however, there is no color, because a little more than half of the population of the United States, for example, will be connected to 5G, with 202 million connections by the middle of this decade, but in China there will be the aforementioned 822 million connections. The relatively small population of the large developed countries in comparison with China shows the absolute disparity between the absolute numbers and the percentages with respect to the population. 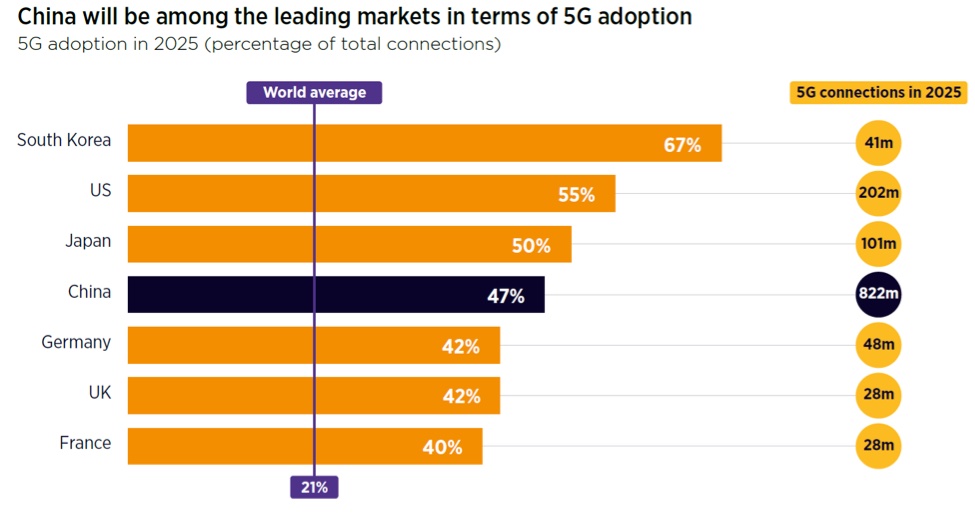 In the Ericsson Mobility Report Q4 2020 update, also submitted late February, you can see the enormous predominance of Asia over the rest of the world in total mobile subscriptions and that its variation in the last quarter has been practically negligible, basically with four million more in India, another four million more in Indonesia , nine million more in all of Africa and six million less in China. According to Ericsson, as seen in the graph below, there are currently 8 billion mobile subscriptions in the world, 57% of them with 4G (LTE) networks. 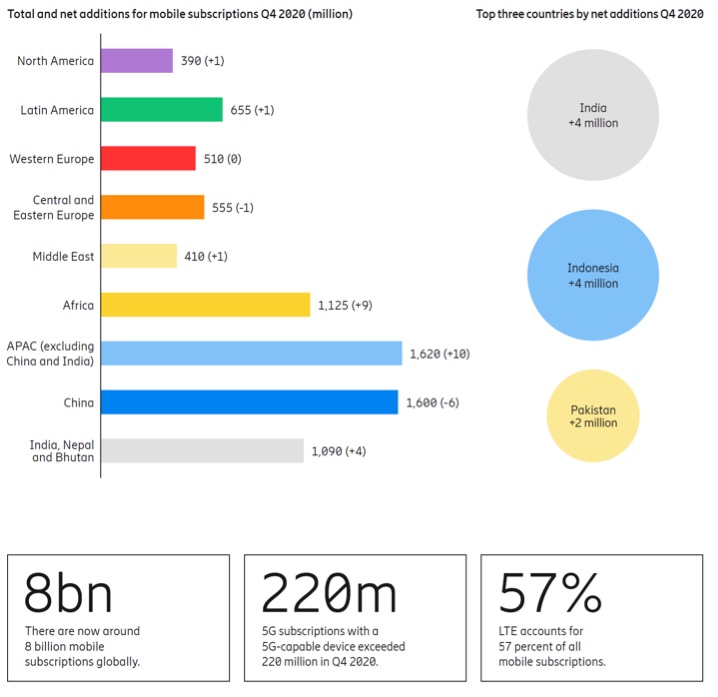 The number of 5G subscriptions with a compatible device surpassed 220 million in the fourth quarter of last year, according to the updated Ericsson report, compared to 4.56 billion LTE connections in the world (57% of the 8,000 million total). The horizontal bars of the top chart show the great notoriety of China, with its 1.6 billion mobile subscriptions, but the 1.62 billion subscriptions of the Asia Pacific region are also very important, in which Ericsson excludes China and India. India is not far behind China, at 1.09 billion now (including Nepal and Bhutan, although they count very little in this case compared to the population of India) and it is likely that in a few years it will have in India a number of mobile connections similar to China.

The top graph, on the other hand, highlights the very low relevance of 5G around the world right now, with the notable exception of China. The deployment figures for 5G networks and 5G subscriptions will continue to be quite low in the next two or three years, especially when compared with the expected evolution of China; But the situation will change, at least in percentage terms, in the 2025 horizon. And towards the end of this decade the highly developed Western countries will gain importance, despite being much less populated than Asia.

Increasing traffic with the pandemic

In this way, in the last quarter of 2020 the maximum of 60 exabytes per month was reached, adding the upload and download data. Half a year earlier, the monthly figure was 50 exabytes and a year earlier, the fourth quarter of 2019, it approached 40 exabytes a month. In other words, the growth rate has remained in the last quarter around 50% but, in absolute numbers, every half year it has increased by 10 exabytes per month, when it was the total figure at the beginning of 2017. The concept of exabyte, on the other hand, it is immeasurable, because an exabyte corresponds to a trillion bytes, or a one of followed by 18 zeros, or a million terabytes, which is a more assimilable concept if you think of a million hard drives full of a terabyte capacity. 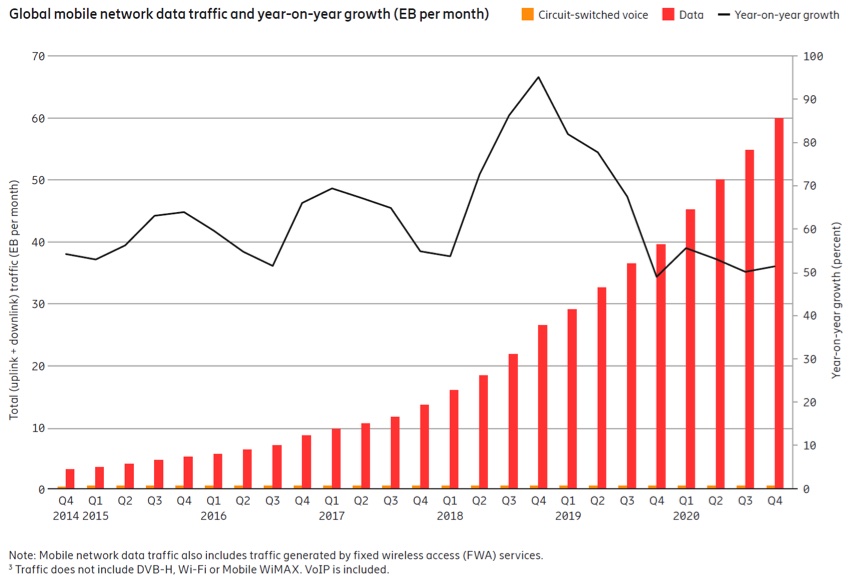 Monthly mobile data traffic now 60 exabytes includes Fixed Mobile Access (FWA) services but not Wi-Fi or DVB-H or mobile Wimax data, as Ericsson footnote in the chart above. In the long term, the growth in monthly data traffic will depend, on the one hand, on the increase in the number of smartphones and, on the other, on the volume of data downloads per smartphone.

The higher video traffic causes the volume of data per download to skyrocket but, on the other hand, the number of smartphone subscriptions is reaching saturation. The obvious conclusion is that traffic will increase, but less and less. It is likely that, had it not been for the pandemic, monthly data traffic during 2020 would not have reached 50%. Perhaps the rate of decline would not have been as pronounced as it was at the end of 2019 without the pandemic and would have remained between 35 and 40%. During 2021, even with the pandemic, it will be seen if the 70, 80 or even 90 exabytes per month will be exceeded by the end of the year. As with 5G and Ericsson Alert, there are big differences between mobile data traffic levels according to markets, regions or service providers.