Mobile telecommunications operators are forced to dramatically increase the energy efficiency of their networks in the short term in order to reduce, or at least maintain, the operating costs of the service. The problem that operators have is that, as more data is downloaded and processed, the consumption of electrical energy increases a lot and, consequently, operating costs, which they cannot pass directly to the end user due to the current price war. Therefore, there is no other remedy but to reduce energy consumption in the networks, a difficult and complex solution to implement.

The operating costs of a mobile network represent for the operator around a quarter of the base cost, or 10% of the billing. In turn, around 90% of the network costs are used to pay for the energy consumed, mainly electricity. Most of this electricity is consumed in the link network (RAN), because much less energy is used in data processing centers and transporting data over the network.

4G and 5G networks are more energy efficient than 2G and 3G; that is, they consume fewer kilowatt-hours per gigabyte (kWh / GB). But, as much more data circulates on 4G and 5G networks than with previous generations of mobile telephony, the end result is that energy consumption does not stop growing and, consequently, the energy bill of the operators increases without ceasing.

The arrival of 5G and the increased data downloads have triggered the energy expenditure of operators and reduced their gross operating margin, which traditionally was one third of turnover

Until the arrival of 5G, operating costs for mobile networks were relatively low and stable, around 10% of the total, while network management, administration and maintenance expenses were around 45%. Investment in equipment (capex) in the middle of the last decade was of the order of 13%, and even lower at the end of the decade, because the large investments in 4G networks had already been made and amortized. This meant that the operators’ gross margin was approximately one third of total billing, as seen in the following graph with the example of the US operator Verizon, extracted from the report “Green is the new black”  from GSMA Intelligence, the association that brings together the majority of the world’s operators. 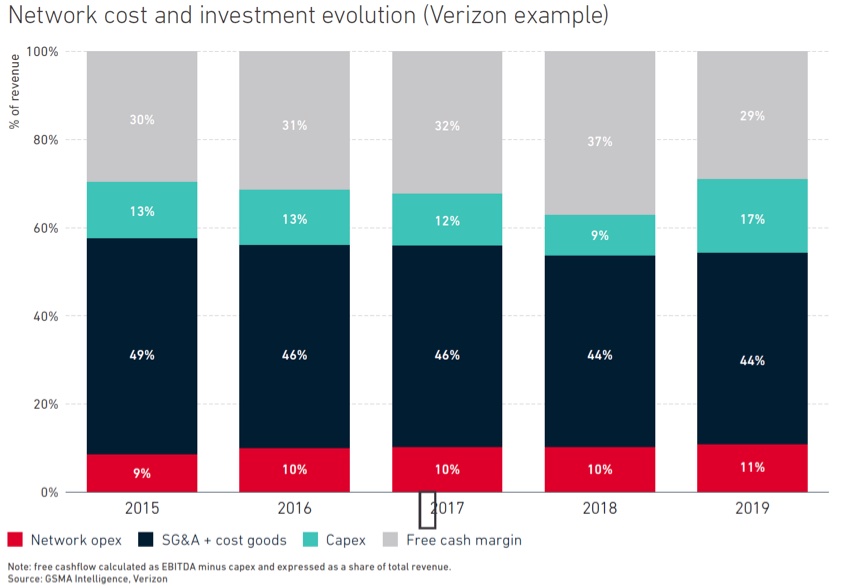 The graph shows that the share of Verizon’s capex with respect to total billing fell considerably in 2018, standing at 9%, while in 2019 it rose to 17%, largely due to investments made in 5G networks. The network operating costs were mainly used to pay for energy, at 23%, while another 2% was for other network operating costs. The remaining 75% was for general services and procurement (SG&A + cost goods, in black, in the top chart).

With the massive data download that 4G has already enabled, which will increase exponentially with 5G, energy costs will only increase, as reflected in the lower graph of the same report. If in 2019, when there was no 5G, half of the energy costs were from 2G and 3G networks and the other half 4G, this year 2021 5G networks will already account for 6% of total energy consumption, to reach 21% in 2025, while the energy consumption of 4G networks will touch 60%. 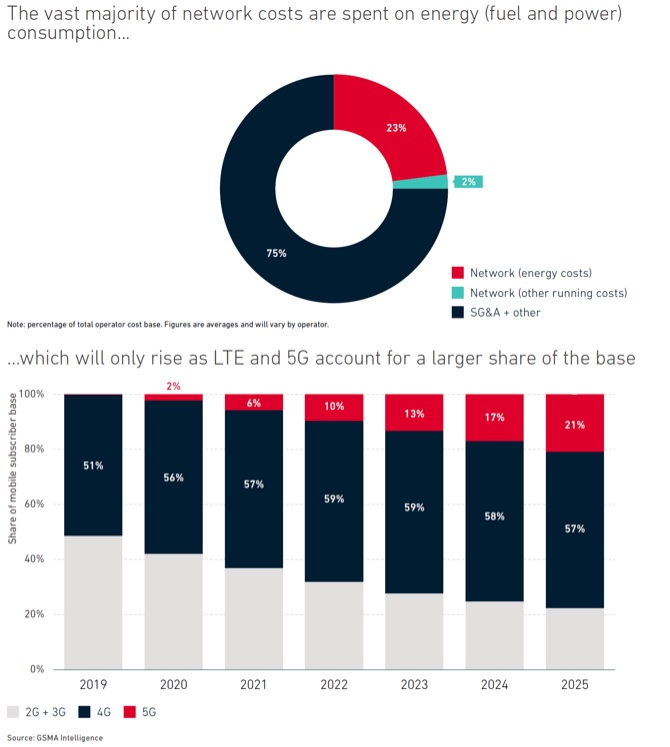 As the report indicates, the increased use of renewable energy for electricity generation can lower the cost of energy in relation to the kilowatt-hour (kWh) consumed, but as many more kilowatt-hours will be consumed by the increase in traffic of mobile networks, the energy bill will only increase.

There is no effective method to increase energy efficiency or reduce grid energy consumption, but rather partial strategies have to be resorted to, such as the greater use of renewable energy, shutting down the link network when it is not in operation for through artificial intelligence systems, the use of more efficient batteries or the deployment of decentralized base stations, with the highest energy consumption derived from the Edge.

To reduce the energy consumption of mobile phone networks, governments, regulators, mobile network operators and all industries must collaborate to make it possible

The telecommunications business has always been based on the growth of networks and their use. In times of high annual billing growth, such as in the 2G and 3G generations, profit margins grew, even though investments in new equipment were greatly increased and networks were not used to their maximum capacity. But with the advent of 4G, the costs of installing and operating mobile networks have only increased, while billing growth has gradually declined.

With 5G, the situation is even worse, because the downward pressure on user fees is much greater, despite the increase in gigabytes consumed. Most of the 5G plans that operators have introduced in the last year with the arrival of the new mobile generation do not imply a price increase compared to 4G, or an additional five euros per month at most, with more data to download. In Japan, where mobile phone rates were proportionally higher than in other countries, the new prime minister, Yoshihide Suga, has been pushing operators to lower their rates for months.

In mid-December, NTT DoCoMo announced that from April it will lower the monthly rate by 13%, the first of the three large national operators that has listened to its prime minister. The rate will be 6,650 yen (52 euros), 1,000 yen less than the current one for 5G with up to 100 GB per month. Precisely, NTT announced last week that it has reached an agreement with the Iwate prefecture, where in 2011 it was left without electricity due to the devastating earthquake and subsequent tsunami, to use 30% of its energy needs with renewable sources. NTT’s telecommunications infrastructure consumes 1% of all electricity generated in Japan, so the company has decided to increase the use of renewable energy sources and achieve zero carbon emissions by 2050.

NTT’s plans seem unambitious at first. In the GSMA “Green is the new black” report, it is specified that Telefónica plans to reach zero energy consumption in 2030, in line with what the company announced, in its Spanish, German, British and Brazilian markets, while Vodafone and Verizon expect to achieve this by 2040. As indicated in the graph below, Telefónica plans to reduce 70% of its CO2 emissions in 2030, while Verizon has announced that it will cut carbon intensity by half in 2025 and Vodafone emissions of CO2 by half in 2025. This year, Vodafone has announced that all the electricity consumed in its European networks will come from renewable sources, while Telefónica postpones it to 2030 and Verizon by half in 2025. 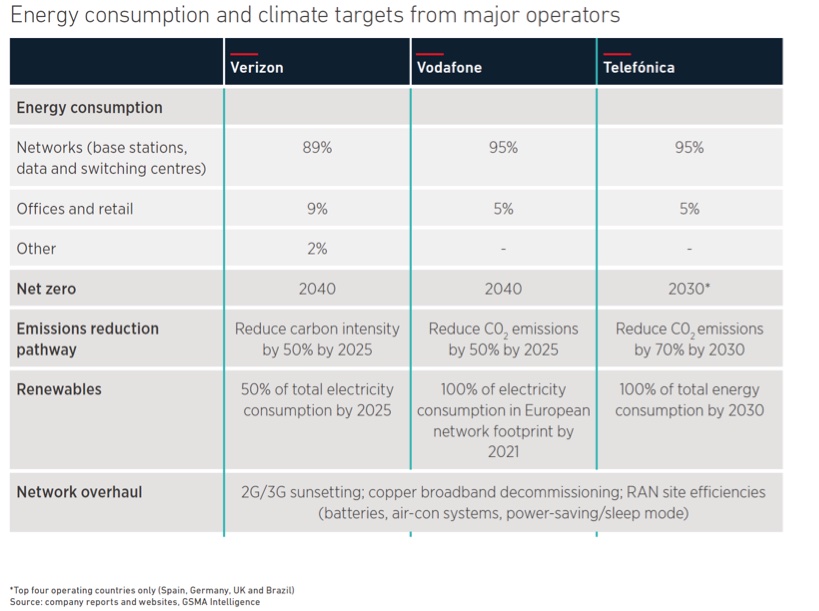 The main action to reduce energy consumption will be carried out by the network operators because the networks account for 90% to 95% of the total energy consumed and the offices and stores, as well as the vehicle fleets, from 5% to 10% . The energy consumed by the operators in indirect products and services is not accounted for because it is out of the reach of the operators (the Vodafone and Telefónica networks, as indicated in the graph above, consume 95% of the total energy).

Energy saving must be done at multiple levels, starting with a good planning of the network architecture to be used, continuing with the use of frugal energy systems in the base stations and data center and adopting the most common elements in the link stations. energy efficient. Users should also be aware of the need to use terminals that consume little energy, because it is in the terminals where more energy is spent globally, apart from the fact that they last longer and do not need to be continuously recharged.

In areas where there is no direct access to electricity, operators are forced to use diesel generators to ensure the operation of their base stations. A more environmentally efficient and less expensive alternative are batteries attached to a solar panel or hybrid solutions, with the use of solar energy, wind, diesel generator or direct connection to the current, depending on each case. 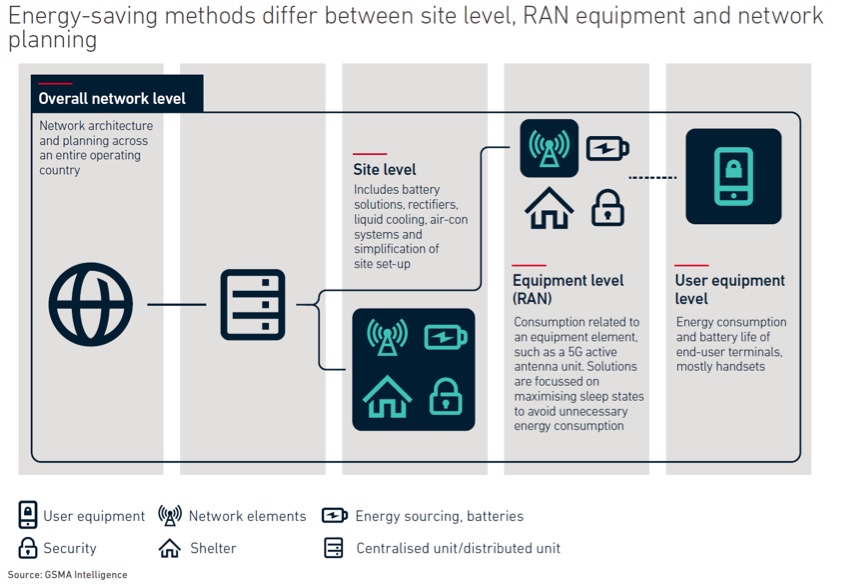 In trunking networks and base stations, turning off equipment when not in use, even for a short time, can save energy. It is also feasible to put some network resources in standby mode, reducing the site infrastructure. The use of more antennas, which is known as Massive MIMO, can also improve energy efficiency according to some studies, as more data can be transmitted and received per unit of energy.

Planning and adjusting the network to the anticipated needs, however, is essential, because it is important that each base station is sufficiently busy or that one part of it is fully operational while the other part is in standby mode. There is, however, no magic bullet. As the GSMA report makes clear, to reduce energy consumption, governments, regulators, mobile network operators, and all industries must work together to make it possible and prevent disastrous climate change. And as its title says, to be profitable you have to be energy efficient.