The five major European mobile operators have created a labeling system that offers a global score of the degree of sustainability offered by the smartphones they sell, together with an assessment of the five parameters that are considered most important: duration of the device, possibility of it being repaired, that it is recycled, its climatic efficiency and the use of natural resources. This labeling will be available from this month of June in all the stores of the operators with a commercial presence and, initially, with the telephones of 16 manufacturers.

The new labeling system, called Eco Rating, “will allow consumers to identify and compare the most environmentally friendly mobile phones to encourage manufacturers to reduce the ecological impact of their devices,” says the statement from the operators. The Eco Rating initiative “will provide solid and accurate information on the environmental impact of mobile phones (both smart and basic) in relation to their production, use, transport and disposal,” he adds.

Eco Rating will globally evaluate each device from zero to one hundred and will also include an assessment of five aspects that are considered basic. The evaluation will be made with a selection of phones from 16 commercial brands, to which more will be added in the future. Launch partners are Bullitt Group (maker of Cat and Motorola rugged mobiles), Doro, HMD Global (which makes Nokia, Huawei, MobiWire, Motorola / Lenovo, OnePlus, OPPO, Samsung Electronics, TCL / Alcatel, Xiaomi and ZTE are, therefore, the main manufacturers but, as often happens in these cases, Apple did not want to know anything about the initiative.

The objective of Eco Rating is “to provide operators and customers with a wide range of ratings to help demand more environmentally friendly products”. Each mobile model will receive an overall score with a maximum of 100 points that will determine the environmental performance of the device throughout its life cycle. The Eco Rating label will also highlight five key sustainability aspects, providing additional information on its duration, possibility of being repaired, degree of recycling possible, its efficiency from a climate point of view and the use of natural resources.

In the graph below, the aspects to which each of these five parameters refer are detailed a little. For example, in the duration the robustness of the device, the battery life and the warranty period of the device and its components are valued. Climate efficiency assesses the amount of greenhouse gas emissions that are emitted throughout the life cycle of the device and harm the climate while resource efficiency scores the impact caused by the use of natural resources in its manufacture. The ease with which the device could be repaired and its recyclability are the other two parameters evaluated. 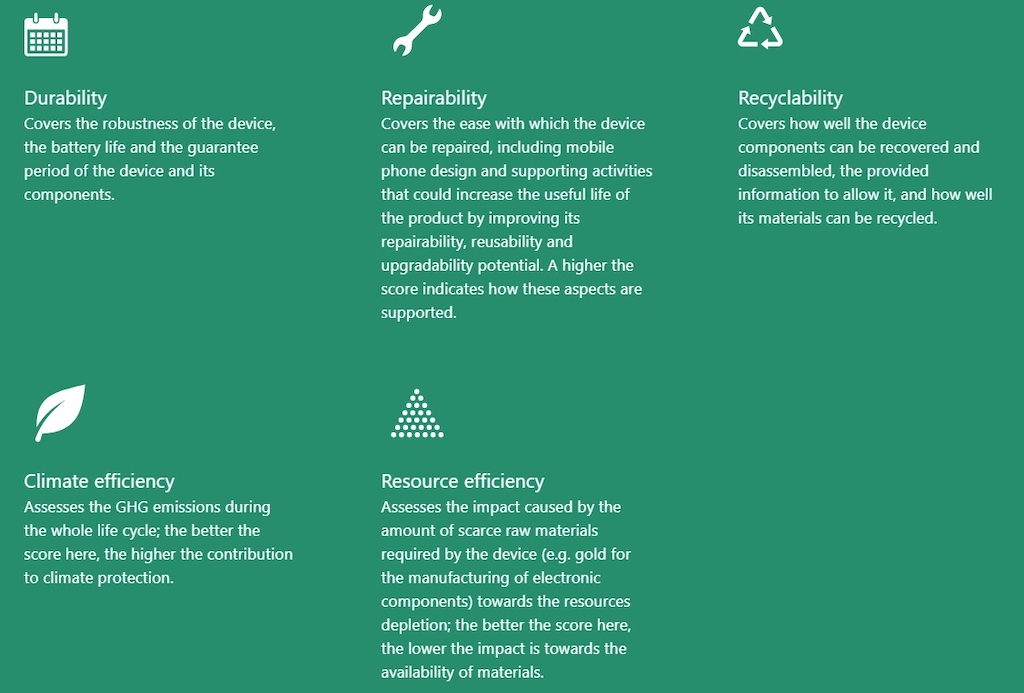 The Eco Rating methodology is based on the knowledge of the industry and on the best practices gathered in previous environmental labeling initiatives, the statement states, and has been developed with the technical support and supervision of IHOBE (a publicly owned agency specialized in the economic development, sustainability and the environment), with the participation of terminal manufacturers and using the latest standards and guidelines from the European Union, ITU-T, ETSI and ISO, with new parameters introduced where appropriate.

Eco Rating in 24 European countries as of June

The Eco Rating methodology will be implemented in 24 European countries, the vast majority: Albania, Austria, Germany, Croatia, Denmark, Slovakia, Spain, Estonia, Finland, France, Greece, Hungary, Ireland, Italy, Lithuania, North Macedonia, Montenegro , Poland, Portugal, United Kingdom, Czech Republic, Romania, Sweden and Turkey. At the moment, there are only small absences from Eastern European countries and Switzerland, which do not belong to the European Union, and the Netherlands, although large markets, such as Turkey and Great Britain, are part of the program despite not belonging to the Union European.

The score of each device will be calculated based on the use of a “consistent evaluation methodology that will treat equally and objectively 13 different environmental impacts and six circular economy criteria”, but not all the details of these 19 criteria will be visible to the consumers. This labeling of the devices will be introduced from this month of June in “the points of sale of the 24 European countries in which the five major European mobile operators that have created the initiative are present”.

It is not clear, however, if the new labeling system will be available only in physical stores and the Internet sites of the five operators or it will also be extended to devices that are sold in other channels, such as physical stores and trading platforms. independent electronic media, as some media have noted. It is foreseeable, however, that some independent sales channels, both physical and virtual, will take advantage of the labeling to promote some of the smartphones that they want to promote especially.

The goal is for consumers to easily identify and compare smartphones that are more environmentally friendly, although it is clearly just one of many criteria consumers use when purchasing a device. The two main ones, as they are usually the price and the global benefits, only enter in a very indirect way in the Eco Rating. The main aim of the initiative is to reduce the ecological impact of the devices, but the aspect of the duration of the smartphone, and especially its battery, is of interest to all consumers, not only those who are more environmentally aware.

Interest of operators for the environment

For years, telecommunications operators have maintained a proactive attitude in relation to the preservation of the environment and especially with the reduction of the energy consumption of their telecommunications networks. They are also interested in making the terminals as efficient as possible, because this way consumers have less need to continuously recharge their mobiles and their degree of satisfaction is higher.

It is evident that if a battery that stores a greater amount of energy is included in the smartphone, the terminal will need fewer recharges, but the fundamental thing is that it be as efficient as possible; that is to say, that it consumes the minimum of energy, both when it is operating and when it is in standby mode. The design of the terminal in terms of the integration of very efficient energy management systems in the processor, screen and in the modem for the connection of the internal and external antennas is essential, as obviously the battery can store a large amount of energy per unit of volume and that allows a large number of refills and that not much capacity is lost with each refill.

With the introduction of each generation of mobile telephony, one of the main workhorses has been to ensure that the new terminals do not consume excessive energy when using the new functions that the new mobile generations allow. It happened with 3G, then with 4G and now with 5G. In the first 5G smartphones that came out two years ago, power consumption was very high when the terminals managed to connect to a 5G network. So much so, that they included an automatic disconnection function to 5G networks and operated by default with 4G networks.

The five operators that have now launched Eco Rating are firmly committed to drastically reducing their greenhouse gas emissions by 2040, a topic that will be promoted at MWC21 at the end of June.

Over time, the new terminals consume less energy and are much more efficient in general, whether connected to a 4G or 5G mobile network, and in this way the degree of user satisfaction is higher. The energy efficiency of a smartphone is very difficult to evaluate, as in almost all electronic devices, because it depends to a great extent on the use made by the user of the terminal. A terminal with which many photos or videos are taken or a lot of information is downloaded from the Internet and it is processed does not use the same energy as a terminal with very moderate use of it.

For the operators, that the terminals are very efficient, especially with the communication with the external antennas, it is important because the users can use them more without fear of running out of battery. The fundamental thing for operators is that their networks use the least possible energy, because the impact on the energy consumption of a mobile network, if a more or less efficient terminal is used, is very low. The basic thing is that the entire mobile phone ecosystem is very energy efficient.

Hence, telecommunications operators have made efforts from the beginning to reduce the energy consumption of their networks and to be more efficient, since the electricity bill represents an increasing part of their expenses. In fact, telecommunications operators have been the most committed to preserving the environment and already in February 2019 the GSMA council, which brings together most of the large operators, made public its commitment to achieve zero emissions. carbon before 2050, as outlined in the Mobile Net Zero report

A year later, in February 2020, representatives of the mobile phone industry through the GSMA prioritized the fight against climate change and announced their support for the Global Electronic Sustainability Initiative (GeSI) of the International Telecommunications Union ( ITU) and Science-based Goals (SBTi) to lessen the impact of climate change and its commitment, as a representative of part of the information technology industry, to reduce greenhouse gas emissions.

According to the GSMA, 29 groups of telecom operators, representing 30% of global mobile connections, joined the SBTi targets in February last year to reduce at least 45% of their carbon emissions this decade. GSMA Director General Mats Granryd expressed his wish that the information technology sector be the backbone of the future economy and play a leading role in achieving the zero-sum economy (net-zero).

A month ago, at the end of April, 65% of the mobile industry is committed to the SBTi objectives and 60 operators, representing more than two-thirds of mobile connections globally, have committed to accounting for their environmental footprint. to be more transparent to investors and customers. Last March, the operators DT, Orange, Vodafone and Telefónica joined the green digital initiative promoted by the European Union.

At MWC21 to be held at the end of June in Barcelona, ​​the emphasis will once again be on giving great support to the UN Sustainable Development Goals (SDGs), as in previous editions of the Mobile World Congress. Granryd confirmed a few days ago that the theme of Connected Impact’s MWC21, a continuation of the Intelligent Connectivity motto of MWC19, wants connectivity to have a full impact on industries, society and governments. The five operators that have now launched Eco Rating are firmly committed to drastically reducing their emissions.