The four major European telecommunications operators have signed a memorandum to promote the rapid development of global and non-fragmented networks, with an explicit commitment to deploy them on their respective national networks as soon as they are available. The joint initiative is interpreted as recognition that the desire of operators to have open solutions is not enough to force manufacturers to develop them quickly and requires the concerted effort of the entire Open RAN ecosystem and, perhaps, the support of Community funds or directly from Germany.

The memorandum of understanding (MOU), signed on January 18 by the heads of technology of Deutsche Telekom, Orange, Vodafone and Telefónica, aims to “implement networks in Europe based on Open RAN”, as is clear in the same Document title.

Its purpose is “to provide a framework for a specific commitment that supports the development of a non-fragmented global Open RAN ecosystem”, so that this ecosystem “is deployed in the European networks of each of the signatories [of the commitment ] and that the operation begins as soon as the solutions are sufficiently mature for a given use case ”, is specified in the first paragraph.

The global RAN market is expected to be stagnant at around $ 35 billion annually between 2020 and 2024, with an Open RAN market approaching $ 3 billion by the end of this period

The document, which by its very nature is not legally binding, recognizes from the outset that achieving successful “modern mobile networks” requires “strong and timely collaboration and support, both from industry and policy makers, to achieve early economies of scale ”. The use of Open RAN technology is considered key to achieve a more competitive 5G environment, which promotes a greater diversity of suppliers and more flexibility for the industry to innovate and differentiate itself.

The operators do not provide many details of the commitment they are going to make in the memorandum. A few weeks ago, Vodafone assured that it will use Open RAN technology in around 2,600 mobile stations on its UK network and last week Telefónica said it would do the same in its network of the O2 subsidiary it has in Germany. Deutsche Telekom, for its part, revealed last month that it will build in Neubrandenburg, near Berlin, an “O-RAN village” with a small-scale deployment of 150 stations, to use Open RAN technology in a real 4G / 5G environment. .

The French operator Orange, for its part, promises that in 2025 “it will start buying only Open RAN equipment when it updates its European networks.” “Our intention is that, from 2025, all new equipment deployed by Orange in Europe should be based on Open RAN,” said Arnaud Vamparys, Senior Vice President of Mobile Networks at Orange. The manager expects that by that date the Open RAN technology will reach “parity” with traditional link networks (RAN) for its deployment in massive networks.

Throughout the document the term Open RAN is used and it is explicitly distinguished from O-RAN, which is the name used by the O-RAN Alliance to define its open link network architecture with interoperable components, whose use is subject to the commitments and payment of alliance patents, apart from the patents approved by the 3GPP 5G consortium on which they are based.

As specified in Annex II of the MOU, Open RAN is a more general term than O-RAN and denotes a disaggregated link network (RAN), which is subdivided into several independent systems using open and interoperable interfaces and protocols. It is added that O-RAN is an important part of Open RAN and that agreements related to Open RAN should be built on the basis of O-RAN specifications.

All activities included in the memorandum will be subject to current competition law. Article 11 also specifies that no attempt will be made and “no entity will be excluded from participating in the development, implementation and promotion of Open RAN”. Neither will the signers of the memorandum define any Open RAN standard, but its standardization will be subject to established standardization bodies, such as the O-RAN Alliance, nor will they coordinate a network deployment or commercial aspects for the acquisition of Open RAN equipment.

The margin of action for the development of a powerful Open RAN market, be it European or even global, is very small with the figures managed by the consultancies and would continue to be controlled by Ericsson and Nokia

Throughout the memorandum, no mention is made of who the traditional RAN suppliers are, although, at least for now, the four signatory operators rely exclusively on equipment from Ericsson, Nokia and Huawei. By law, Vodafone will not be able to buy Huawei equipment in its British networks, but in principle it will be able to continue doing so in its networks in Germany and Spain. As reflected in article 11, neither Huawei nor anyone can be excluded from participating in the development of European Open RAN networks. However, at the beginning of the memorandum, it is recognized that the guidelines established by the European Union in its 5G Security Toolbox must be followed.

The ambiguity of the document signed by the four operators already begins in the title, because it is a commitment to launch “networks based on Open RAN in Europe”. The intention, therefore, is not to be limited only to mobile link networks (RANs) that are more or less open and interoperable and unbundled, but to open up all the possibilities that are being developed in radio stations for the connection of RANs with upstream network, including so-called Cloud RANs by Ericsson.

In the joint statement issued with the signing of the memorandum, It is said from the outset that the four operators have come together to support the deployment of Open RAN “for the benefit of residential and business customers across Europe” and that Open RAN solutions will benefit “from new open virtualized architectures, software and hardware, to build more agile and flexible mobile networks in the 5G era ”. The declared objective is to achieve a timely commercial deployment in Europe of the Open RAN technology with “Carrier-grade” quality, which is required from the operators.

For Enrique Blanco, director of technology and information at Telefónica, “Open RAN is the natural evolution of radio access technologies and will be key for 5G networks”. Claudia Nemat, director of technology at Deutsche Telekom, specified in the statement that “to advance on this initial work, we urge the government to support and finance community activities that strengthen the European ecosystem and leadership in 5G.”

Also Johan Wibergh, technology director of the Vodafone group, says that “we urge European governments to join us in creating the Open RAN ecosystem” and Michaël Trabbia, Orange’s director of technology and information, considers that Open RAN “ it should have the support of a large European ecosystem (academics and researchers, software and hardware developers, integrators, public funding for R&D) as this is a unique opportunity to strengthen European competitiveness and leadership in the global market ”.

Despite much talk about the RAN market, open or closed, the expectations for the next five years are that there will be a practically flat growth. Last year, the global RAN market grew by around 8%, from $ 30 billion in 2019 to $ 35 billion in 2020, according to consultancy Dell’Oro. This high increase was basically due to RAN 5G investments in the Chinese market, where the three large national operators installed around 700,000 base stations.

This year and the next, the calculation made by the Omdia consultancy is that the global market will continue to be around 35,000 million dollars. Investments in 4G link networks will be practically nil in developed countries, mostly replaced by others of the same order of magnitude in 5G networks. China will continue to invest heavily in 5G link networks this year, as it did in 2020, but investment from the rest of the world’s operators will not grow substantially globally in 2021, in part due to the lack of spectrum in the United States, the global crisis and difficulties in monetizing 5G networks among consumers.

As of 2022, investment in China should be reduced, because the most important markets will already be quite covered, and in the rest of the world it will increase slightly, but the total RAN market will continue to be very similar until 2024, according to Omdia’s forecasts shown in the bottom graph. The Open RAN market will grow substantially in the next four years, because it starts from a practically zero level. The traditional RAN market (Closed RAN in the graph) will drop 14% at the turnover level between 2020 and 2024, which will be largely offset by the Open RAN market, according to Omdia. 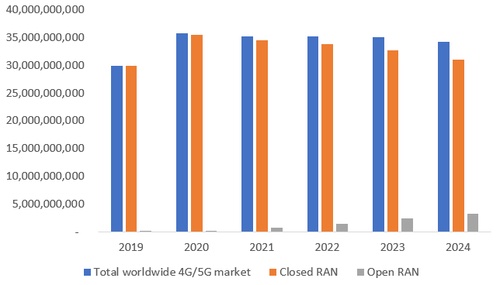 Omdia’s forecast is that sales of O-RAN products (those certified by the O-RAN Alliance) will reach $ 3.2 billion in 2024, up from $ 252 million last year. It will be a highly competitive Open RAN product market in the coming years because, apart from the three best-known American companies (Altiostar, Mavenir and Parallel Wireless), we must add the Japanese manufacturers NEC and Fujitsu, the operator Rakuten and the Korean Samsung, which are investing heavily in Open RAN product development as well as Indian manufacturers and operators. And, of course, we must add Ericsson and Nokia above all else.

Starting in 2025, the Open RAN market could explode, according to Appledor’s expectations, although it is very difficult to make such long-term forecasts for a product that is still in development and it is not known how it will evolve or who will lead it in the second half of this decade. Among other unknowns, it is not known whether Chinese telecommunications equipment manufacturers, especially Huawei and ZTE, will be able to compete in the international Open RAN market or if their main area of ​​influence will continue to be all of Asia, with traditional RAN products.

It can be taken almost for sure that from 2023 there will begin to be a relatively important market for Open RAN products, around 5% of the total RAN market and 10-15% one or two years later, adding virtualized and hosted products on the cloud.

What is not clear is that the proposal that the four large European telecommunications operators have just launched is attractive enough for Nokia and Ericsson and it is doubted that the other interested companies, apart from the fact that they are not European, may have enough incentive views the figures that the consultants handle. All these considerations, however, could change radically if there is public aid involved.

The four operators, when presenting the memorandum, suggested that a part of the community recovery funds could be used to promote Open RAN. It is doubtful that they will be earmarked, mainly because there are much more pressing needs to allocate the funds. However, national public aid could arrive. In particular, the German government seems inclined to allocate part of a 2 billion euro budget for the development of Open RAN, according to the German newspaper Handelsblatt, which claims to have seen the documents of the German government plans.

This German public aid would be part of a stimulus plan approved last June of no less than 130,000 million euros to help Germany go digital. A total of 5,000 million dollars would go to artificial intelligence projects and another 2,000 million to the development of new network technologies 5G and later 6G and to support innovative companies that want to develop network technologies based on software, as the documents seen by say. Handelsblatt.

If a substantial part of this budget line went to Open RAN projects, the incentive for telecom equipment manufacturers to be more responsive would be much greater. The United States, which is trying to develop a national telecommunications equipment industry and is discussing public aid, could also help. Another alternative, somewhat ironic on the other hand, would be for Huawei or ZTE, or both, to agree to develop a flexible Open RAN in exchange for European operators offering full equipment purchase guarantees in the future, as in fact proposed in the memorandum.