The four large cities in South Korea have 5G coverage close to 95%, both outdoors and in some interiors, and the average download speed exceeds 400 megabits per second in each of them, according to measurements carried out by RootMetrics at the middle of last May. At the moment, everything works with 5G NSA networks, but the KT operator has already started the commercial deployment of 5G SA networks, totally 5G.

The nearly 30,000 measurements carried out by RootMetrics between May 6 and 17 in Seoul, Busan, Gwangju and Incheon, the four main cities of South Korea, clearly demonstrate the strong will of its Government and the three national operators to lead the deployment of 5G networks worldwide and the average data download speed, according to the report by the consultancy, which belongs to the IHS Markt group.

Measurements carried out by RootMetrics confirm that South Korea has a very wide coverage of 5G mobile services, especially in large cities, and “excellent transmission speeds [of mobile data] in each city” by the three operators national: KT, LGU + and SK Telekom. Compared with the measurements made during the second half of 2020, the consultancy has observed “a strong improvement” in the results in this first half of 2021.

South Korea leads by far in coverage and data download speed with its 5G networks, which currently use NSA technology but KT has already started to deploy commercial SA networks

In the country’s capital, Seoul, KT and LGU + achieve coverage equal to or greater than 95%, while SK Telekom reaches 93.2%. When it comes to latency, LGU + is the most favorable, with 25.5 milliseconds, followed by KT with 34.5 ms and SK Telekom with 42 ms. As can be seen in the lower graph of the report, excellent coverage data is achieved in the other three cities in South Korea, as well as low latency, very similar to that achieved in the capital. 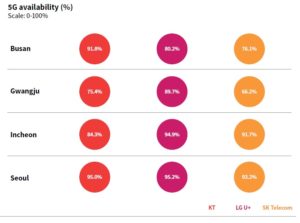 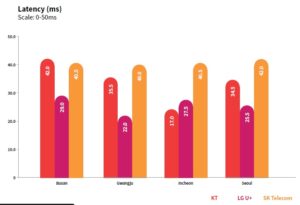 The average data download speeds recorded by the consultancy are equally high. In Seoul and Incheon, both SK Telekom and LGU + far exceed 600 megabits per second while KT lags slightly behind at around 450 megabits per second. In Gwangju, the three operators exceed 550 megabits per second on average and in Busan SK Telecom occupies a higher speed than the other two operators, as indicated in the graph below. At these speeds, users can download a 500 megabyte file in less than ten seconds. 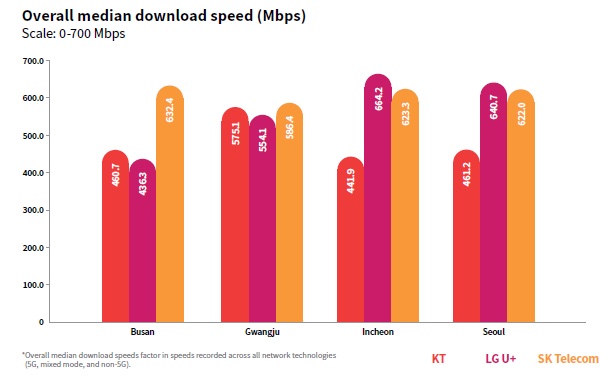 The average download speed reflects the average value of the speed recorded by RootMetrics when using all available networks, be it 5G, mixed mode or 5G LTE, although to achieve a direct comparison of the speeds achieved by each operator, they have been taken into account only downloads with 5G networks. The same is true for 5G network availability percentages.

The International Mobile Telecommunications Union, in its IMT-2020 regulation, establishes that the average download speed in a “real” (true) 5G network must consistently achieve a minimum of 100 megabits per second. Regarding latency, Microsoft recommends that to optimally use Xbox Game Pass with a game in the cloud, the latency should be less than 60 milliseconds. Therefore, the consultancy clarifies, the three operators more than meet these speed and latency requirements over 5G.

The consultancy firm highlights in its report that it is the fourth time that it has evaluated the performance of 5G networks in South Korea, since the country began marketing the service in April 2019. On each occasion, the results have exceeded the previous ones in terms of access to 5G networks, speed and low latency. South Korea, he adds, has also managed to lead the world race to have better 5G networks and has achieved it in a very prominent way compared to the rest of the countries.

Seoul is the city with the highest availability of 5G networks in the world, with between 93 and 96%. After Seoul, New York City follows, with coverage that AT&T claims is 74.1%, Zurich with 45.5% by Swisscom and London with 43.7% provided by EE, the brand. BT mobile.

However, some Korean consumers are not satisfied because they believe that they were promised a higher download speed and have filed a lawsuit for not complying with the conditions stipulated in the contract. In fact, when the benefits of 5G began to be promoted five years ago and until very recently, there was talk of having a download speed of 1,000 megabits per second (1 gigabit per second) and a latency close to one millisecond.

The three Korean operators have achieved very remarkable results with their 5G networks, but each has its own strategy. In the case of LGU +, connectivity prevails. In the measurement carried out by the consultancy, in Seoul it achieved an average speed of 640.7 megabits per second, a jump compared to the 601.5 megabits per second of the second half of 2020. According to specialists, this high speed has been achieved with the use by LGU + of Huawei 5G network equipment and Massive MIMO, both in Seoul and Incheon.

South Korea had 71 million mobile subscribers in May: seven million subscribed to the 5G service in the first year and another seven million this second year of commercial 5G, reaching 20% ​​of 5G subscribers

For the operator, however, it is not only a question of having a good 5G network but of providing an efficient information system in real time that uses the technologies now available such as the cloud, edge computing, IoT, big data. and artificial intelligence. The operator recently launched a search service for lost children through fingerprints: according to its calculations, combining 5G and artificial intelligence can locate the lost child in 52 minutes, compared to 56 hours with 4G. The use of 5G in the industry is, logically, another of the LGU + lines of action.

For both LGU + and the other two operators, the main objective in a 5G network is to have a wide coverage, which allows consumers to enjoy a reliable experience without speed jumps. 5G is also a great opportunity to provide new services to consumers, such as virtual reality and augmented reality. Third, they consider, 5G is key to unlocking the massive use of numerous complementary technologies, from artificial intelligence to IoT devices, in a way that benefits both the consumer and the operator.

A couple of weeks ago, KT reported that it was introducing the first commercial 5G SA network in the country, which exclusively uses 5G networks, although the service will for now only be available to users who have a terminal from the Samsung S20 range. With the 5G SA network, all the benefits expected with 5G technology are achieved, apart from extending the battery life of the terminal thanks to the more efficient use of energy, according to the operator and reducing the latency, that is, the time in receive the desired information.

The other two Korean operators have been very cautious when it comes to promoting SA 5G networks and consider that there is not an excessive rush to have them, since first it is a priority to achieve wide coverage in other areas of the country, outside the big cities . A SK Telekom spokesperson assured on the day of KT’s announcement “that it will be some time until consumers notice the difference.” For this reason, he added, “we take a more conservative position until we believe we have a more advanced technology that is better for consumers.”

Clearly, KT rejects these insinuations outright and suggests that SA 5G will initially have a great impact on businesses and then the benefits will be extended to consumers. The SA 5G network opens the door for the technology to be used in a multitude of industries and not only in smartphones. The KT spokesperson points out that gaining a few milliseconds may not be very relevant now, but he opens the door to important future applications, where low latency will be essential.

In Europe, several operators are testing SA 5G networks, but none have been launched commercially yet. In fact, SK Telekom claims that it did a test with a SA 5G network in a factory of SK Hynix (well known for being one of the big manufacturers of semiconductor memory, along with the also Korean Samsung) and the results were rather poor. .

In a white paper last January, Samsung explains the many benefits that 5G SA technology can provide. The Korean company acknowledges in the introduction of the report that LTE has meant a great leap in terms of higher transmission speed and low latency, but that with 5G the change will be much greater, because the transmissions will be much more reliable and with much higher connection density, apart from ultra low latency and much more efficient use of the radio spectrum.

The size of South Korea, the competitiveness of its industrial groups (chaebol) and the enthusiasm of a large part of the population for technology partly explain why it is the country that leads 5G technology worldwide. At the end of April, South Korea had a total of 14.5 million subscribers to 5G networks, up from seven million in May 2020. In the first year of 5G commercial deployment, therefore, Korea Sur has managed to capture seven million 5G subscribers and another seven million, approximately, in the second year of activity of this mobile technology, since it was in April 2019 when it began to launch.

According to the report released by the Korean Ministry of Science and Technology, at the end of April the country had 71.1 million mobile subscribers. It thus means that approximately 20% of mobile subscribers are subscribed to the 5G networks of one of the three operators that provide the service. In April alone, South Korea added another 792,000 new 5G subscribers.

The operator with the most 5G subscribers is SK Telecom, with 6.74 million at the end of April, followed by KT with 4.4 million and LGU + with 3.3 million, according to official data. In July last year, the three Korean operators agreed to invest a total of $ 22 billion through 2022 to expand 5G infrastructure across the country.

Operators plan to introduce millimeter wave technology shortly, although the timing and amount of the investment have not yet been made public. What is known is that the service will be available, initially, only for business services. It is clear that South Korea paves the way for 5G and the rest of the world’s operators are closely monitoring its progress. They are aware, however, that the particularities of each country mean that each operator must follow its own strategy.