More than half a million users in South Korea who had contracted a 5G service have signed off because they are dissatisfied with the quality of the service and the poor coverage provided by their operators, despite being considered the country with the best and the most the world’s most advanced mobile infrastructure. The three national operators have also seen the average billing per mobile user drop in the first three quarters of 2020, due to strong competition and the outlay made to attract 5G users. The situation in South Korea shows the financial and commercial difficulties that mobile operators around the world will have to face in order to continue introducing 5G services in an accelerated, and at the same time profitable and sustainable way, during this year 2021.

South Korea’s three mobile operators have around 70 million subscribers, of which about 14% have a 5G contract. By the end of 2020, the bar of 10 million 5G users in the country will probably have been exceeded, although official confirmation is lacking. SK Telecom has about five million 5G subscribers, KT three million and LG U + the other two million.

South Korea was the first country to have a commercial 5G mobile network on April 3, 2019, just an hour before the American Verizon, which had accelerated its plans to say that it had turned on the first commercial 5G network without finally succeeding. . Switzerland’s Swisscom was the third to do so in the same month. Therefore, it has been a year and three quarters that commercial 5G services have existed in the world.

South Korea has the fastest and most advanced 5G services in the world, but many users are disgusted by the quality of the service, because they had been promised much more than what they now offer

By 2025, South Korea has set a goal of having more than 40 million 5G customers, about two-thirds of total mobile users, with the remaining third using almost exclusively 4G, because 3G and earlier generations will be virtually gone by then. The rate of replacement of 4G by 5G is very fast, because it is expected that by the end of 2022 a third of all mobile users will be 5G and 45% a year later, according to GSMA Intelligence forecasts. 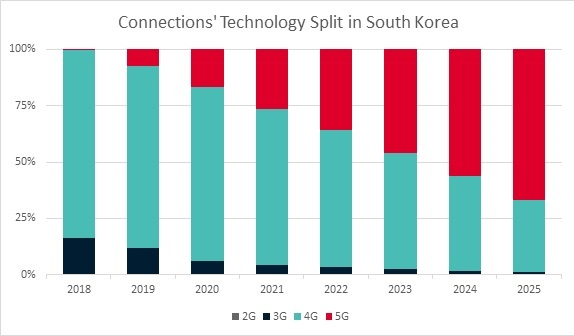 The average download speed, in real conditions, of South Korea’s 5G networks is 336.1 megabits per second, only surpassed by that of Saudi Arabia with 377.2 megabits per second, according to December data from the consultancy Opensignal and reflected in the graphics below.

However, since everything is relative, the average download speed of South Korea’s 5G services is only 5.6 times higher than 4G, in line with most countries, where 5G services are typically five to five. six times higher than 4G, as seen in the table below. This apparent contradiction is due, in large part, to the fact that South Korea’s 4G services already have a very high average download speed of 60.5 megabits per second, the highest in the world, according to the latest measurements from Opensignal. 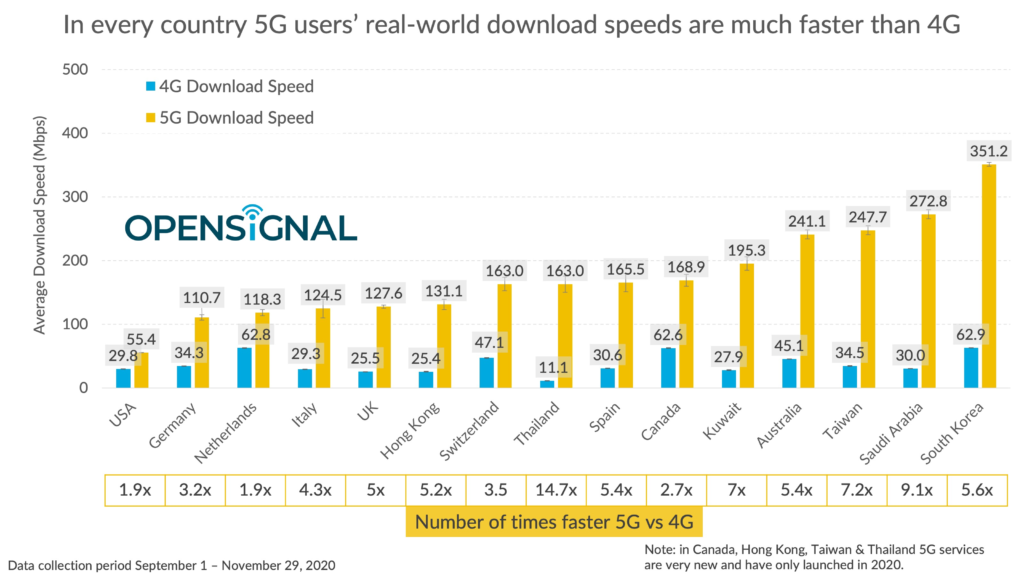 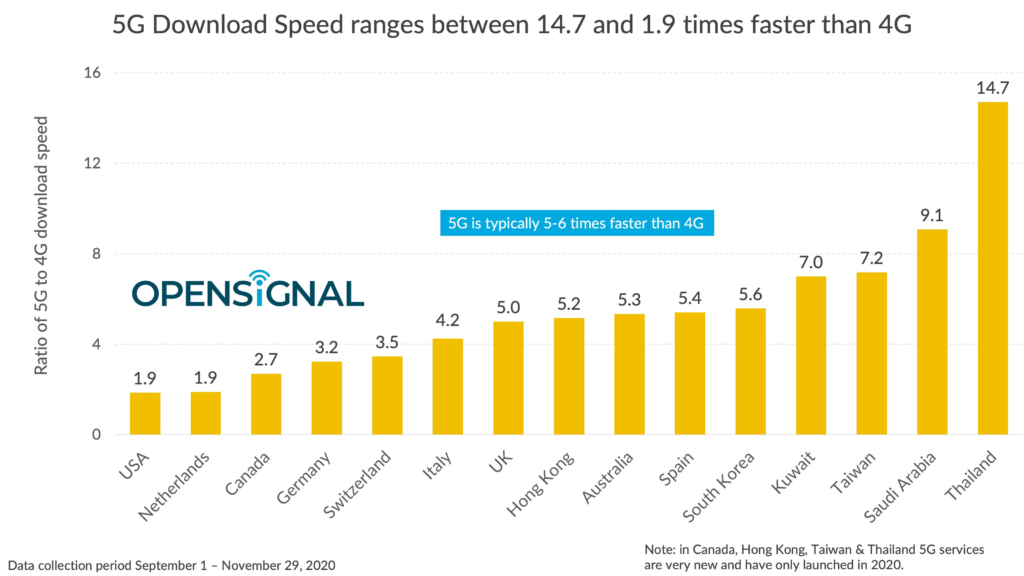 This may explain the dissatisfaction of many Korean users with their experience with 5G. 4G services in South Korea enjoy excellent coverage, practically total, as in almost all developed countries and, in addition, a very high average speed, only comparable to that of Canada or the Netherlands, which are close to 60 megabits per second. The big difference is that in Holland the speed with 5G increases only 60% with respect to 4G and in Canada it triples but remains at 183 megabits per second.

Latency in large cities is very high, less than 30 milliseconds in many cases, which allows you to play online with your smartphone or watch streaming movies without interruptions

It is noteworthy that in Spain 5G is achieved with a speed seven times higher than 4G, more than in South Korea, but the average speed barely exceeds 200 megabits per second. From the point of view of the Korean user, therefore, although with 5G it is possible to increase the average speed 5.6 times compared to 4G, as it starts from a very high level with 4G it is more difficult to appreciate the difference. The poor coverage of the 5G service outside the big cities (although it is much higher than in other countries) also generates dissatisfaction for a user as demanding and technological as the Korean. Of course, if Opensignal’s measurements are accepted, it will be difficult to convince the Dutch to switch to 5G with a 60% increase in average speed and without reaching 100 megabits per second, if there is not a great improvement 5G service in the Netherlands in the coming months. 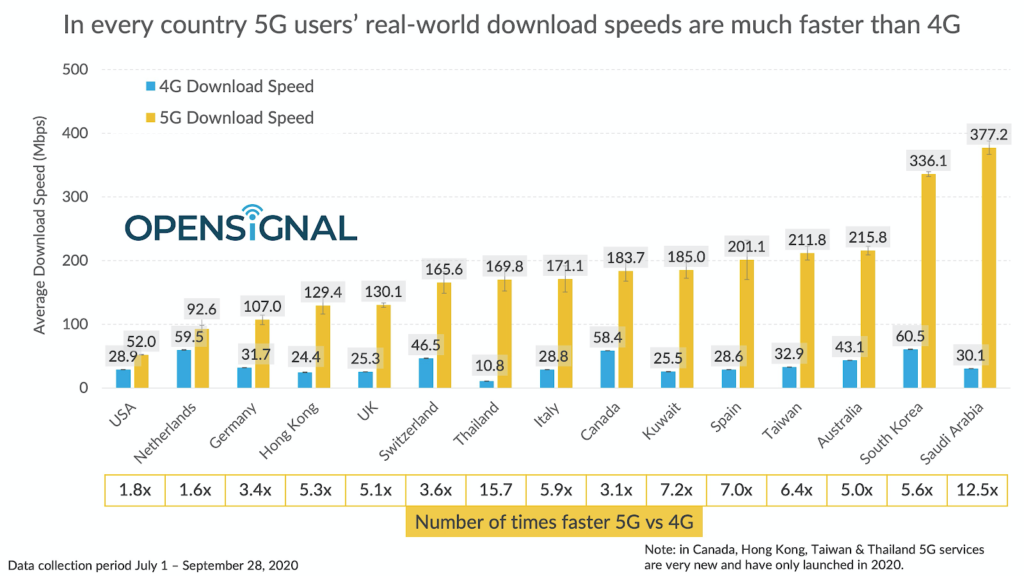 Opensignal’s measurements also show results in different directions depending on the period considered. Thus, for example, in South Korea the average speed of 4G and 5G services has increased in the quarter from September to the end of November compared to that of July to the end of September, as seen in the graph above regarding to the one above. On the other hand, in Spain, to cite one case, the average 4G speed has increased in the last measurement and that of 5G has decreased, which is now 165.5 compared to the 201.1 megabits per second of the previous measurement . Or the spectacular drop in 5G speed in Saudi Arabia in the last measurement compared to the previous one. This makes the data only a rough indicator of the situation of mobile networks in each country.

Data from Opensignal and similar studies from other consulting firms show that the typical increase in average speed achieved with 5G compared to 4G is four to five times, although it can be only double, as is the case in the United States , where they have average speeds both 4G and 5G of the lowest in the world, or almost fifteen times as in Thailand. If to this is added that some operators do not increase the rate for 5G services compared to 4G and in others they do and that in some countries 5G coverage in large cities is high and in others it is very low, the situation of services 5G varies by country and is hardly comparable to the rest.

On October 7, Hong Jung-min, a lawyer for the Democratic Party that governs South Korea and a member of the National Scientific Assembly and the Communications and Broadcasting Committee, warned that 562,656 mobile users had switched from 5G to 4G service by the end of August, because they were unhappy about the poor connectivity offered by 5G networks. This number of subscribers who have unsubscribed from 5G represents 6.5% of the total 5G subscribers in South Korea.

In Hong’s view, consumers have canceled their 5G service “because they are disgusted with the poor quality, inadequate coverage and high rate structures,” echoed Nikkei. Therefore, Hong urges operators to do more to improve the quality and customer satisfaction of their 5G services. For some user quoted by the Japanese newspaper, the battery of mobile phones drains very quickly with the 5G connection and the connection is not as fast as promised when the service was launched.

Both the Korean government and mobile operators initially maintained that 5G would achieve a speed twenty times faster than 4G and that a two-hour movie could be downloaded in three seconds, instead of five minutes with 4G. According to a published report from the Korean Ministry of Science and Technology, the average speed of 5G in the three operators is four times higher than 4G and that the coverage is limited to the capital Seoul and six major cities and its metropolitan area.

For Byeon Jae-il, another lawyer for the government democratic party, the government must correct the data it has given on 5G speed. According to Byeon, to achieve a speed of 20 gigabits per second, or twenty times that of 4G, it is necessary to work with the 28 GHz frequency band. With the 3.5 GHz band, which is the one used in Korea In the south and in most of the world (except for a few networks in the United States) the maximum speed is 1.9 gigabits per second.

More worrisome for operators is that the three national operators of South Korea have seen their average billing per mobile user fall during the first three quarters of 2020, due to the strong competition to attract 5G users, at the same time that they have delayed their plans to install base stations operating in the 28 GHz band to achieve speeds of several gigabits per second.

By the end of August 2020, the big three Korean operators had installed a total of 105,000 base stations, out of the planned total of 150,000 base stations in the next ten years. Although this number will be achieved much earlier than expected and there will be great coverage in the main cities of the country, it is doubtful that the 2,000 indoor antennas that the Government had contemplated to increase the satisfaction of 5G users will be fulfilled very soon. It is also not clear that operators will install the expected 15,000 base stations in the 28 GHz band by the end of this year 2021.

Another problem to be solved is the availability of 5G terminals at a very reasonable price, as is the case in China. At the moment, operators mainly offer smartphones manufactured by the Korean companies Samsung and LG, with features and a high price, although not as much as in the free market because they are subsidized by the operators themselves.

A recent study by RootMetrics shows the wide availability of 5G services in the capital Seoul, between 71% and 91%, according to the operator, while the average download speed, also in the capital, it exceeds 426 megabits per second, as seen in the graph below. In six other cities, such as Busan, Daegu, Daejeon, Gwangju, Incheon and Ulsan, the average speed is also very high.

The availability of 5G services is also very high, close to 95% in Seoul or 91% in Incheon. Even, as RoorMetrics says, where the availability of 5G is the lowest of the seven cities, in Busan with the LG U + network, there is 54.8%, which is higher than the one in New York , London or Zurich.

The latency achieved in large cities is also very high, less than 30 milliseconds in many cases, which allows users to play online games with their smartphones or watch streaming movies without signal interruptions, as seen in the RootMetrics bottom chart. 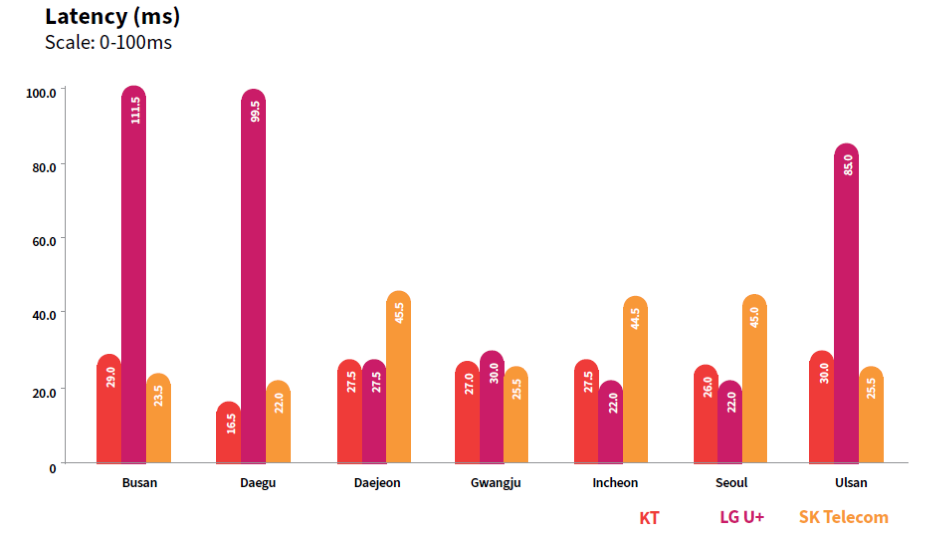 From all this, it can be deduced that 5G services have advanced very quickly in the little more than a year and a half that they have been launched, but that there is still much to do. It is expected that with the progressive launch of SA 5G networks, download speeds will increase and latency will be reduced. High hopes are also pinned on business applications, although they are taking longer than expected to get up and running.

For now, SK Telecom has just launched a new video calling service, called V Coloring, which consists of the Receiver receives a short video announcing the call, which can be created by the user or downloaded from the corresponding application, as seen in the image above of this article. The operator is confident that this and many other applications will awaken a renewed interest from users in 5G.