The migration towards IoT connections based on 4G networks is accelerating, as well as the more recent 5G, thanks to the progressive shutdown of 2G and 3G networks and the greater possibilities offered by both 4G and, above all, 5G. In key applications such as telemedicine, enhanced Industry 4.0 or connected cars, where reliability, low latency and high speed are key, 5G network-based IoT devices will be essential. Huawei expects no less than 100 billion mobile IoT connections by the end of this decade, as revealed at the IOT Summit.

On June 30, Huawei made a presentation of the future it foresees for IoT devices, and especially thanks to the deployment of 5G networks, at the Mobile IoT Summit 2021, a meeting that it sponsored within the MWC in Barcelona. The company highlighted the great evolution that IoT will have in this decade, with greatly improved applications at an industrial level and personal experiences, due to 5G and the future and scheduled evolution of mobile networks. The presentation was given by Koby Levy, director of IoT and digital transformation at Huawei Technologies Spain, who specified that “NB-IoT is growing at an accelerated rate and the adoption of 5G in the industry is making solid progress.”

China is focusing on NB-IoT, Levy said. And he gave as examples the operator China Telecom, which last May had more than one hundred million NB-IoT connections, including more than 30 million water and gas meters, and a national coverage of 97.84%. He also cited China Mobile, which has more than 400,000 NB-IoT base stations and applications that integrate the NB-IoT module, SIM card, device and platform, for the convenience of potential users.

The 5G era is here, with the innovative and viable business cases that will drive massive IoT devices, and with a growing focus on Smart Industry 4.0.

Last year it was already expected that the growth of NB-IoT over 2G and 3G networks would stop and progressively switch to using 4G and 5G networks. The shutdown of 2G and 3G networks, even higher than expected in China, has caused an even faster migration to 4G of IoT devices and new applications are already based on 4G and, increasingly, also on 5G.

The full support of the International Telecommunication Union (ITU) at its meeting on July 9, 2020, in which NB-IoT technology was officially recognized as a 3GPP 5G standard, as also happened in 2017 with the approval of NB-IoT Within 4G, it has been a strong boost to the predominance of Nb-IoT technology over 4G and 5G networks, stressed the Huawei executive. The company, as seen in the image below, strongly supports the evolution of Mobile IoT on 5G networks.

Since 3GPP Release 14, the NB-IoT specifications over LTE clearly improve the capabilities of machine-to-machine (M2M) connections over 2G networks. As seen in the graphics in the bottom image of the presentation, NB-IoT over LTE achieves a transmission speed of more than 100 kilobits per second and a speed, in mobility, of 120 kilometers per hour. The capacity is also eight times higher and the energy savings of the order of 60%, says Huawei.

To the right of the upper image you can see the applications most used with NB-IoT, which have improved with LTE networks. These are well-known applications, which have been talked about since the beginning of the term “internet of things”, more than a decade ago, and which have made their fortune with the acronym IoT. Smart meters for gas, water and electricity, which allow remote reading at the desired intervals, are one of the most common applications, as well as all types of detectors, be it smoke, fire or water and gas leaks.

Most IoT applications, including 5G NB-IoT, will not be very sophisticated: 60% will be done in low bands and at low speed, another 30% at medium speed and wider band and the remaining 10% at high speed and reliability. and low latency

In cities, they also have great application, such as in lighting systems, parking or public traffic lights. Some of these systems are simple presence detectors that turn on and off after a while, but others are much more sophisticated. Other more sophisticated applications involve real-time tracking or inclusion in certain consumer goods, be it refrigerators, bicycles or door opening sensors. Even in infrared thermometers that measure the temperature of a person from a distance, as an anti-Covid measure as shown in the image above, among other applications.

China has been deploying hundreds of millions of NB-IoT devices in these applications for many years, far more than in any other country. This has allowed it to build a broad ecosystem that ranges from the design and manufacture of NB-IoT modules and components on a large scale, with great experience in the design and management of a multitude of applications in a simple way for its users. 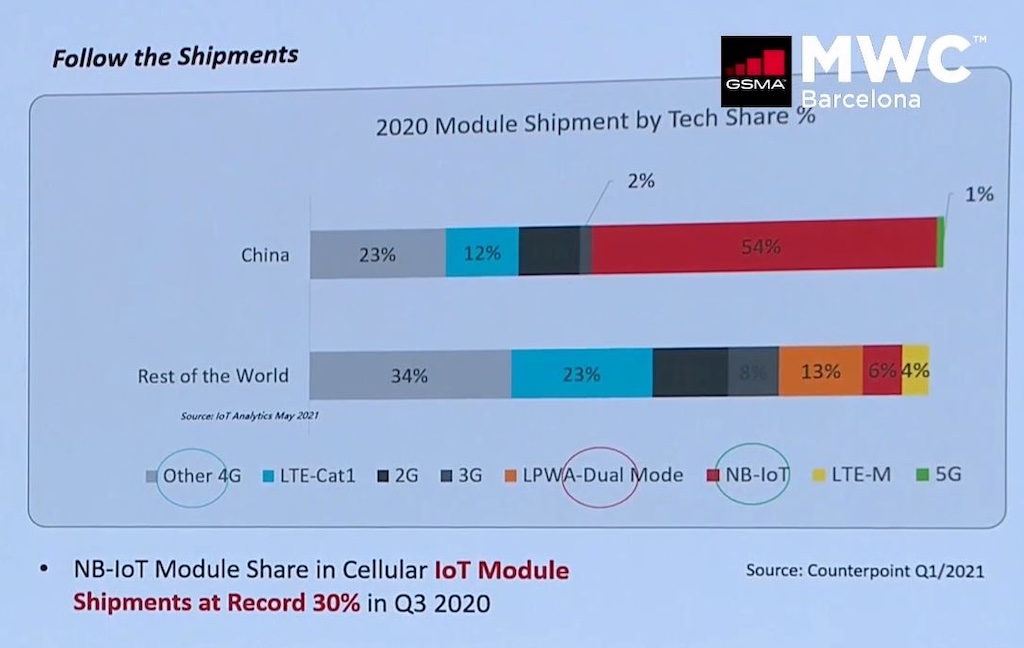 China, said the Huawei executive, will continue to focus on massive NB-IoT applications, with large market share but lower future growth, such as smart meters, but its main focus in the coming years will be applications with high growth and large share. market, such as industrial or telematics.

The use of LTE-M grows, and also on 5G

All applications, however, will grow at a good pace, also those based on LTE-M, as indicated by the lower left graph of Quectel shown by Huawei, in which 100 million connections will be exceeded this year, compared to a relatively derisory number last year, predictably doubling next year and approaching 300 million in 2023. Smart payment systems and the sharing economy will be the most relevant cases, as can be seen in the image of Huawei’s presentation.

Currently, Levy added, 5G-based IoT applications and use cases are still in their infancy, but they have the greatest potential for growth, especially in value, with the 5G industry as the top priority. The use cases of Enhanced Mobile Broadband (eMBB), Massive Machine-to-Machine Communications (mMTC), and Ultra Low Latency (URLLC) will be key to the development of IIOT, the industrial IoT in the coming years, as the image below shows. the presentation of Huawei. 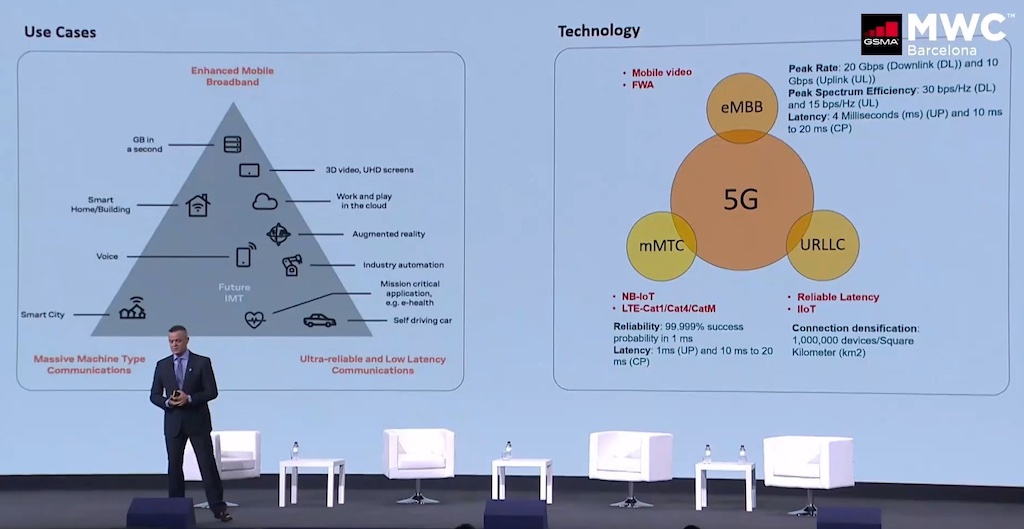 The development direction of these 5G-based applications is shown in the image below. First, we will start with IoT applications that make the most of Enhanced Mobile Broadband (eMBB), then Mass Machine-to-Machine Communications (mMTC), and then Very Low Latency Communications (URLLC), although this does not mean that the three have already begun to be applied and that those of one type are more advanced than another, because the directions of development of communications are multiple and in all directions.

In any case, “the adoption of 5G in the IoT industry is making solid progress,” as seen in the image below, added the executive, and is growing at unparalleled rates. As seen in the graph, the contracts between industry verticals and operators in 5G are for 3 billion yuan, about 400 million euros. 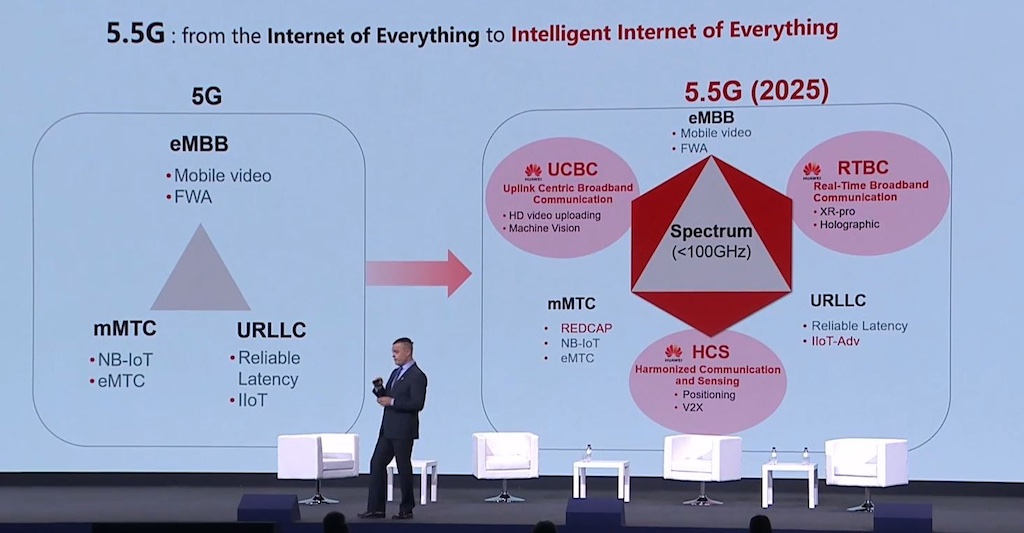 The vast majority of IoT applications, even those based on NB-IoT 5G, will not be very sophisticated or at very high speed. It is estimated that 60% of future 5G NB-IoT connections will be made in the low bands of the radio spectrum and at low speed, with applications such as meters and smart cities, agriculture, logistics or tracking.

Another 30% will be at medium speed and wider band, under NB-IoT or LTE-Cat 1, with applications such as tracking electric bicycles and motorcycles, vending machines or devices in vehicles.

The remaining 10% of cases will be those of high speed, high reliability and low latency, based on ultra-bandwidth 5G NR networks, and with applications in telemedicine, industry, connected cars or 5G very focused on businesses that, Despite their smaller numbers, they will be crucial for society.

In short, the presentation concluded, “the 5G era is here, driven in this decade by innovative and viable business cases that will drive massive IoT devices, with a growing focus on smart industry 4.0.” It will go, Huawei calculates, from the nearly 1.9 billion licensed IoT connections that there were last year to 100 billion connections by the end of the decade.

There are signs that China is on the way to achieving part of this vision. The great unknown, although the Huawei executive did not formulate it, is whether the rest of the world, and mainly Europe, will follow the same upward trajectory and by 2025 will align with China, in the development of IoT in this case.