The investment required for the full deployment throughout Europe of the 5G mobile network and fixed fiber optic network would amount to 300,000 million euros by 2027, according to the calculation made by the European telecommunications operators through their association ETNO and a report prepared by the consulting firm BCG. For the association, the investment “is worth it” and could create up to 2.4 million new jobs in the next four years. The report does not make clear, however, how this investment could be financed and made profitable to achieve the coverage objective set by the European Union.

The ETNO association, which brings together the main European telecommunications network operators, presented last Thursday an extensive report, entitled Connectivity & Beyond: How Telcos Can Accelerate a Digital Future for All  and prepared by the international management consultancy Boston Consulting Group (BCG), when the European Council of heads of State and Government of the European Union had met to discuss, among other issues, the future of European industrial and digital policy.

As the title of the report itself makes clear, European telecommunications operators are convinced of the need for citizens, homes and companies to be fully connected through 5G mobile networks and fixed fiber optic networks at the end of this decade, according to with the vision expressed earlier this month by the European Commission with its communication Digital Compass 2030.

Building a gigabit society in Europe is extremely relevant to the challenges posed and we ask leaders to support the European telecommunications sector, says ETNO Director

The operators also argue in the report that the deployment of these fixed and mobile networks can really accelerate this “digital future for all.” Moreover, they consider that “the effort is worth it” and that only with the deployment of 5G networks could generate an annual increase of 113,000 million euros in European GDP and create 2.4 million new jobs in Europe from now until 2025. 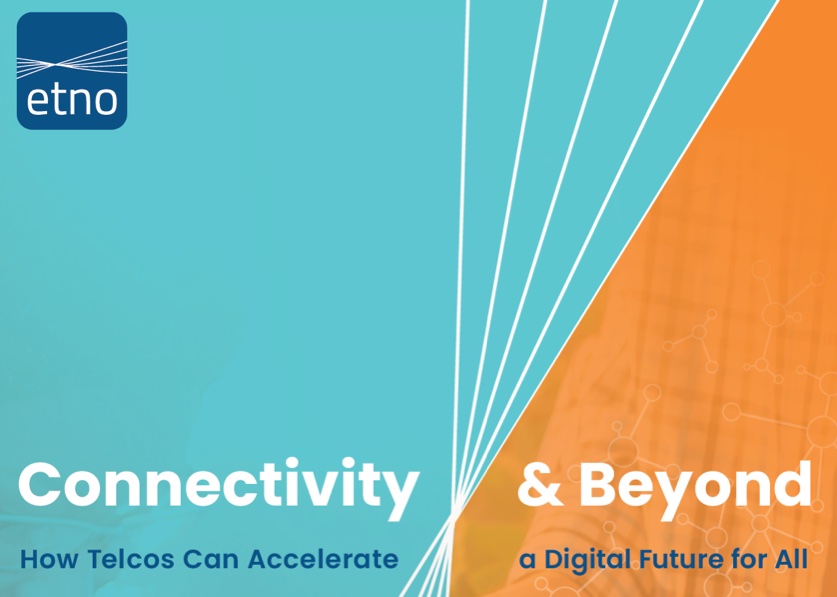 At a time when the European Union wants to reactivate the economy with the Recovery Plan, “the construction of gigabit networks and innovative digital services can help increase productivity and generate a smarter way of working”. In addition, the widespread deployment of digital solutions can reduce carbon emissions by up to 15%. Smart cities can contribute to a 30% cut in carbon emissions and digital transformation in the transport sector with another 30% lower carbon emissions, the report says.

For all this to take place, “Europe must drastically increase its investment capacity in telecommunications networks and achieve gigabit speeds in all territories to ensure full digital inclusion.” BCG estimates that 150,000 million euros are still necessary to achieve a full deployment of 5G networks in Europe and that an additional 150,000 million are required to complete the fixed infrastructure with gigabit speeds, which are only possible with fiber optic networks, it says in the report presented by ETNO.

Investment in demand of 280,000 million euros

These 300,000 million euros would be necessary until 2027 on the supply side to build this infrastructure, which would be carried out by telecommunications operators. But the report also points out that it would take a great investment effort on the part of the demand. According to their calculations, 83% of small and medium-sized companies in the European Union are not yet using advanced cloud services and 60% of the nine-year-olds currently educated in schools are not digitally equipped.

The European Union’s comprehensive digitization strategy for this decade highlights its just ambition to achieve digital leadership globally. In any case, the report states, “the spirit of Europe’s political objectives must now permeate political and regulatory actions at both European and national levels.” The report details a series of urgent political actions, including: increasing the attractiveness of the investments to be made when deploying the network, greater and broader collaboration from the sector industry, a strong stimulus to the demand and digital transformation in all industrial sectors, prioritize the leadership of European digital services and a determined investment in learning digital tasks.

Altogether, an investment of € 300 billion in fixed networks and 5G would be needed in Europe until 2027 and € 40 billion per year to update the infrastructure in schools and small and medium-sized enterprises.

In the ETNO statement  that summarizes the report, Lise Fuhr, general director of the association, emphasizes that the construction of a gigabit society in Europe “is extremely relevant to the main challenges posed, including economic recovery and the transition to a green economy.” And she adds: “We ask European leaders to support the telecommunications sector and help us to have a strong digital economy for all citizens.”

For his part, Wolfgang Bock, manager and partner of BCG, states that “the pandemic has reinforced our dependence on the telecommunications infrastructure in virtually all aspects of our work, education and social life.” “We need to learn and apply this lesson to ensure that Europe makes the necessary investments to remain competitive.” The report shows a path to building a better digitally prepared workforce and creating millions of jobs, he adds.

Multiply by 2.5 the investments to be made

The objective of the European Commission to achieve “the European digital decade” is highly commendable and the operators are willing to facilitate it with the construction of a powerful infrastructure, but remember that it will be necessary to put the means. “There is no shortage of money, ETNO sources say, but the telecommunications infrastructure has to be deployed in such a way that investors prefer to put one euro in European telecommunications rather than in their American or Asian competitors.”

Governments and regulatory bodies must help accelerate the process of building telecommunications infrastructure and increase its impact on demand. The key is, in the end, to make investment in the deployment of telecommunications networks in Europe attractive again and thus ensure the long-term sustainability of the sector.

In the report, the operators cite their classic demands: “That the spectrum and other public resources such as the sites to install the networks are available when they are needed and at reasonable prices and conditions”, so that they reach all Europeans. Also, that the telecommunications sector “be built on a global scale and horizontal cooperation is fostered and with shared ambitions”, as well as that greater attention is paid to stimulating the demand and use of telecommunications in Europe, in order to make the more sustainable sector.

Another demand of the operators is to promote European shared platforms, in accordance with European values ​​and adjusted to their specific needs, such as setting a new digital standard that Europe can trust because it safeguards data, protects people and secures connections. Initiatives such as OpenRAN or European cloud solutions can help European industries work in an open and united way and promote scalable solutions. And it cites solutions on a European scale such as secure, electronic or mobile identifiers. A determined European industrial policy can also contribute to strengthening the European telecommunications sector and, incidentally, the European productive and industrial fabric.

The report pays attention to the new use cases that 5G will allow when the deployment has been done on a large scale and that would increase the turnover achieved by the operators. The graph below specifies that the new 5G use cases will account for around two thirds of the turnover of European operators in 2025. 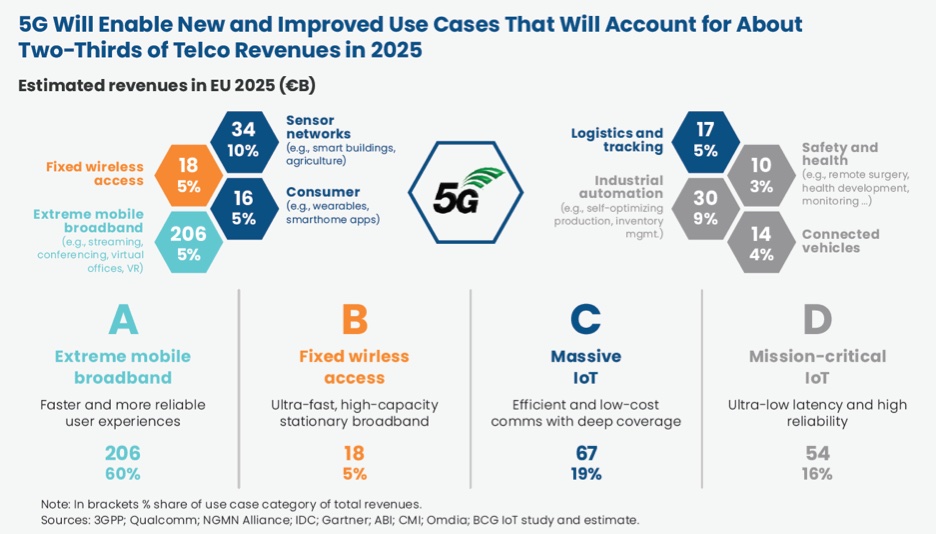 As shown in the graph above, the category of extreme mobile broadband services (A), such as streaming video, videoconferencing, virtual offices or virtual reality, will be the ones that will achieve the highest billing, followed by massive IoT (C), such as networks of sensors in smart buildings or agriculture, consumer applications or logistics and shipment tracking, or mission critical (D) IoT, with all applications in industrial automation, connected vehicles or related to health and safety. Fixed wireless access (FWA) (B) may not bring much additional billing but allows relatively isolated cores to have gigabit broadband services with less investment by operators.

5G, as the graph below indicates, can generate 113,000 million euros per year of impact on annual GDP and 2.4 million jobs in 2025. The main benefits will be in the automotive sector and in jobs, with 42 billion and 31 billion euros, respectively, in 2025, according to projections made by BCG on unspecified calculation bases. 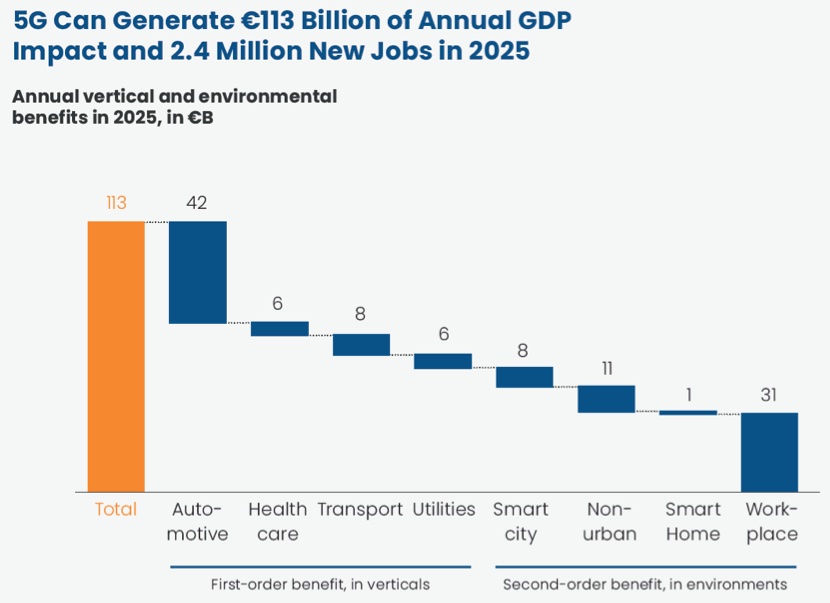 The main obstacle that operators face, however, is their stock market crash in recent years, at least in relation to their European counterparts. Taking as a reference the same index in October 2010 of the US and European operators, ten years later the former have more than doubled their capitalization and the European ones have fallen 57%.

While Verizon was worth € 206 billion on August 15 and AT&T € 181 billion, Deutsche Telekom had a capitalization of € 73 billion (despite the good results of its US subsidiary T-Mobile US merged with Sprint), Vodafone 35 billion, Orange 26,000 million and Telefónica 19,000 million as seen in the graph below. This means that the investment and borrowing capacity of European operators is much lower than that of the United States. 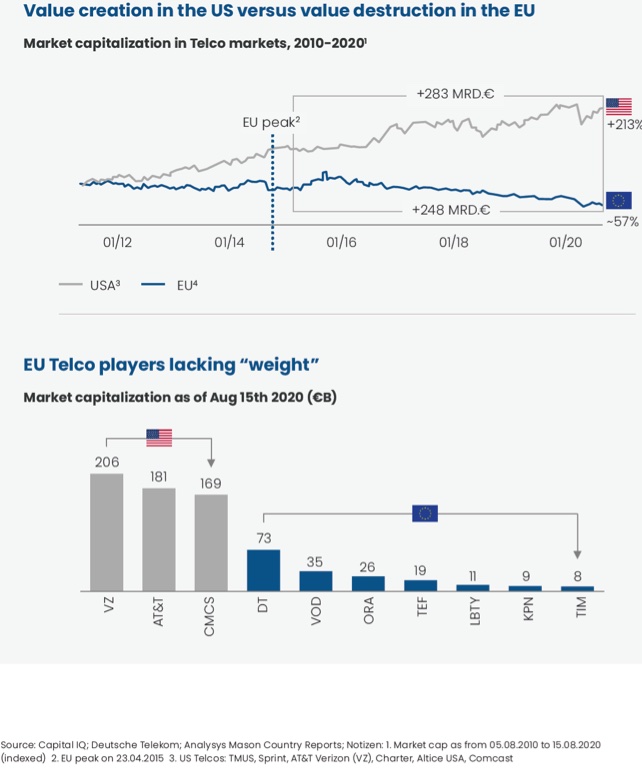 To add insult to injury, the global telecommunications industry has one of the lowest returns on investment for shareholders in the industry, around 6% between 2015 and 2019, but the European one is even worse, due to the deterioration of the value of your shares. And, as Tim Höttges, CEO of Deutsche Telekom puts it, “We have catastrophic value creation from telecommunications in Europe; our billing is going down and the need for greater investments is growing ”.

The fragmentation of the markets  in Europe explains many of these evils, as well as excessive regulation, as they have put recently highlighted the operators. Excessive competition and the appearance of numerous virtual operators, boosted by the ease with which they obtain wholesale agreements from the dominant operators and with their own network, also favors this, as is the logical interest of consumers and companies to obtain the lowest rates.

In Spain, this situation of weakness of the operators at European level is much more worrying, because the relatively scarce market has to be divided between four large operators. One of them, MasMovil, does not have its own network but has just made a takeover bid for 2,000 million euros to acquire all of Euskaltel, which does have a fixed and mobile network, and which will probably go ahead because it has secured the backing of 53 % of the capital of the company to be acquired. If a few days ago there was speculation about an agreement that merged MasMovil with another operator, the Spanish subsidiaries of Vodafone or Orange, and move to three large operators, the foreseeable thing is that there will continue to be four, with less chance of being three and more competitive.