The French Senate last Tuesday approved a bill that aims to reduce the ecological impact of digital technology and guarantee the development in France of “sober, responsible and ecologically virtuous digital consumption”. On December 15, Arcep, the French telecommunications regulator, already published a long report in the same vein, entitled “For a sustainable digitization”. The point, they argue, is that the digital sector is already responsible for 3% to 4% of greenhouse gas emissions in the world and, if urgent measures are not taken, the increase in energy consumption due to the exponential growth of data will be unsustainable in the medium term. The main problem is terminals, which represent 81% of the ecological footprint, followed by data centers with 14%, while networks only account for 5%.

The report of the Autorité de Régulation des Communications Électroniques et des Postes (Arcep) is a synthesis of the work platform launched in the last two years with various studies, debates and thematic meetings, and which is specified in eleven proposals to combine the development of digital uses and technologies with the reduction of the environmental footprint of digitization.

Arcep is an independent French agency, in charge of the regulation of telecommunications in the neighboring country, similar to the Spanish Telecommunications Market Commission, which since 2013 has been included in the National Commission of Markets and Competition (CNMC). In the report, the Arcep recalls that digital technology constitutes “a powerful factor in the evolution of society”, both economically and socially as well as in the daily lives of citizens and the evolution of public services.

We do not want to stop digitization or limit its ecological impact, but rather to combine its development with social and economic needs with a new environmental requirement.

Its intention, by limiting the ecological impact of digitization, is not necessarily to stop its uses or its technologies, but “to combine digital development according to the needs of society and the economy with a new environmental requirement”. With these environmental measures, Arcep “wants to open a new chapter of its regulation.” Some measures that Sébastien Soriano, president of the organization since 2015, will not carry out, because he finished his mandate on December 31. It will, in any case, be the task of the new president, Laure de La Raudière, who should be confirmed in office shortly.

In the report, it is suggested that Arcep should control the impact of digitization, both for fixed and mobile network operators and data centers and major providers of content and digital platforms such as Netflix or HBO or manufacturers smartphones, as well as large technology companies, such as Google, Apple or Facebook. The report is the result of the concerted effort of some forty actors, coming, almost in equal parts, from the public administration, environmental defenders and industry industry.

The clearest conclusion of the report is that “digitization today represents 3% to 4% of greenhouse gas emissions in the world and 2% of the national footprint, including the production and use phases” . It is a relatively low figure compared to other industrial sectors, but the problem is that the expected annual growth of digitization, in terms of data volume or number of terminals, among others, could increase its ecological impact “significantly if not nothing is done to limit it ”. According to a French Senate report cited by Arcep, annual growth would be 60%, or 6.7% of the national carbon footprint in 2040.

The point is that the reports produced so far do not identify the responsibilities of each of the actors involved, although they have allowed Arcep to better understand the environmental footprint of digitization and have convinced it that “it can and should be involved in the strategy of low carbon ”. The organism’s ambition is “to combine the development of digital uses with the reduction of its ecological footprint”, based on using an intermediate path between freedom of action and the managed economy.

Dialogue and engage the sector

The Arcep proposal contained in the report results from the dialogue between the various parties: “Our priority is to accompany, guarantee and expand the companies’ commitments”, without renouncing to impose sanctions in case of non-compliance. The first most effective measure to reduce the ecological impact of digitization is to convince operators to slow down the renewal cycle of smartphones and to facilitate their recycling, because terminals are responsible for 86% of the effects of greenhouse gases (including smartphones, televisions, tablets and computers). And the second is to blame providers of streaming video content, such as Netflix, because they represent 75% of the traffic on electronic networks, the report reads.

Arcep’s proposals are specified, on page 115 of the report, in three initiatives: knowing and monitoring the ecological footprint of the different links in the sector and digital actors; integrate care for the environment into the powers of regulation of telecommunications networks, both fixed and mobile, and encourage economic agents to be much more responsible in respect of the environment.

Mobile and fixed networks represent only 5% of the ecological footprint of digitization, compared to 14% in data centers and 84% in terminals 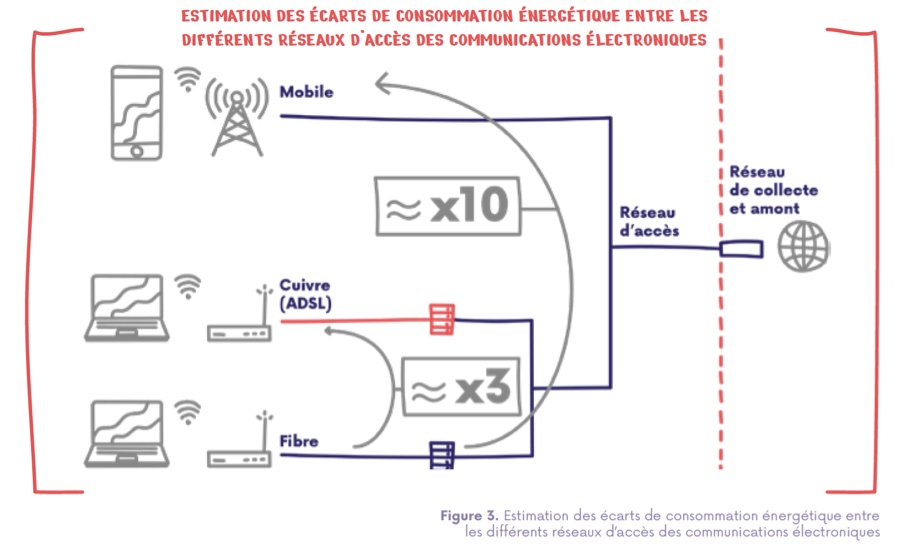 Access networks, on the other hand, represent between 70 and 80% of the ecological footprint of an electronic communication network, as seen in the following graph of the same report, while link and trunk networks represent a 20% and the data center the remaining 10%. 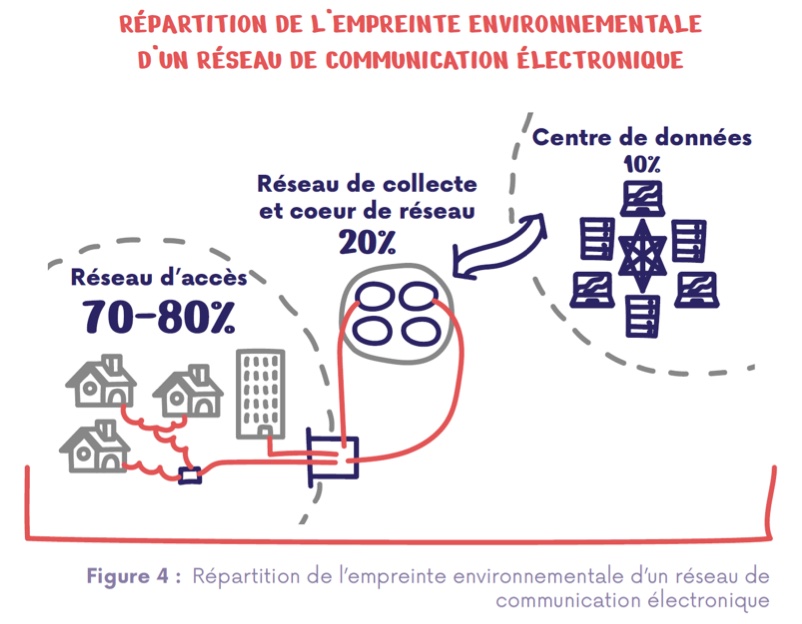 However, if the entire environmental footprint of digital technologies is taken into account, it turns out that networks, both fixed and mobile, only represent 5% of energy consumption in the Internet access chain, while the impact of infrastructures (data centers) account for 14% of the total. The fundamental part of the environmental problem of digital technologies is in the terminals, with 81% of the total, as can be seen in the following graph. 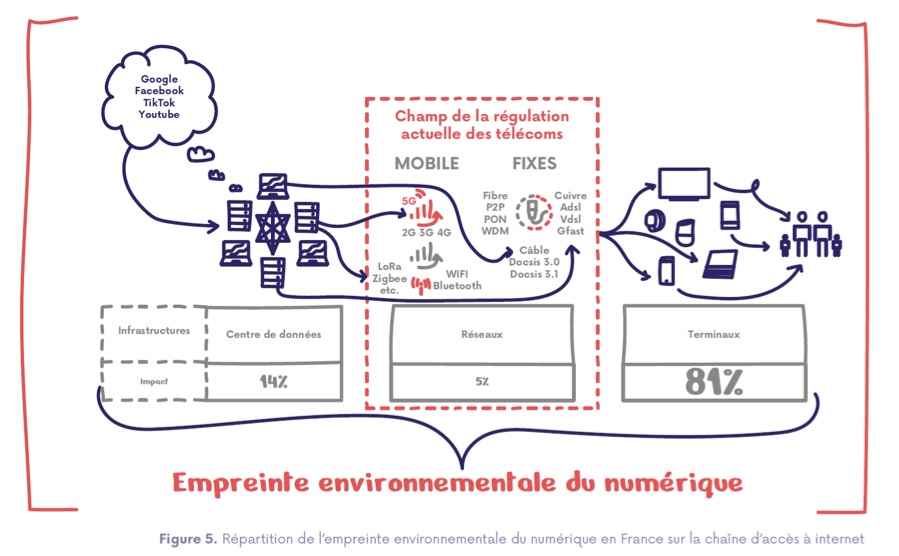 Telecommunications operators are making great efforts to reduce the electricity consumption of their networks, because each time it represents a more important part of their operating costs, as analyzed a week ago in this Observatory,  but in the end the environmental footprint of Internet access on fixed and mobile networks is 5%. As more and more users access more data through the Internet, and on top of these searches use more artificial intelligence techniques to provide more precise information, energy consumption in data centers is increasing exponentially.

The ecological drama therefore comes mainly from the terminals. Every year around 2.5 billion devices are placed on the market, including smartphones (1.2 billion in 2020 and 1.5 billion in recent years), computers and laptops (300 million in 2020, with the rise of work at home, and some 250 million the previous years), televisions (around 250 million) and tablets and consoles (another 250 million). The energy consumption for their manufacture and for the extraction and processing of the raw materials of the terminals makes the footprint of the networks or even the data centers relatively insignificant. Hence, Arcep supports the need to update and recycle terminals if it does not want to further aggravate climate change and the planet’s mineral and energy resources.

Proposal for an ecological-digital law of the French Senate

The French Senate approved last Tuesday, in first reading, a bill whose main objective is to reduce the carbon footprint of digital technologies used in France. This text, although approved by senators from both ends of the hemicycle, is not final, because it may be reviewed and amended in the National Assembly (Congress).

Throughout its four chapters and 24 articles, the French Senate bill aimed at reducing the environmental footprint of digitization in France envisages converging the digital and ecological transitions through four priority pathways: making users aware of the environmental impact of digitization; limit the renewal of digital terminals; promote virtuous digital uses, especially the mandatory eco-design of websites, and emerge an environmental regulation to prevent increased energy consumption and polluting emissions in networks and data centers.

As the press release of the proposed law summarizes, it is necessary to limit the renewal of terminals, prohibiting planned obsolescence and improve the information of users against subsidized offers and “marketing obsolescence”. The criteria for the durable design of websites must also be set and the environmental regulations for data centers and networks must be strengthened, to prevent their energy consumption from increasing by 75% by 2040. The French Government is also asked to Publish your inter-ministerial roadmap to move towards a sustainable digital transition and ensure France’s compliance with the Paris Accords.

Stéphane Richard, head of the French operator Orange for ten years (before 2013 it was France Télécom) and current president of GSMA, the association that brings together the majority of world operators, qualifies the Arcep report a bit in a published interview in Journal du Dimanche two Sundays ago. Asked about the ecological risk, he asks for more objectivity: “Data storage, network infrastructure and the manufacturing of network equipment represent no more than 3.5% of greenhouse gas emissions. 80% of this 3.5% is linked to equipment and the manufacture and use of telephones and only 20% to networks, including data centers ”.

Richard recalls that industry contributes 43%, buildings 26% and transport 25% of all greenhouse emissions. He thinks that it is abusive to present digitization as one of the causes of rising emissions and climate change. For every ton of CO2 released by digital technology, another ten tons are used by the rest of the industry. The ecological impact of a physical meeting versus a virtual one is one hundred to one, he emphasizes. 5G technology is ten times more energy efficient than 4G. He considers it bad faith not to recognize that digitization is in itself a solution, rather than a problem creator.

The commitment of operators to reduce their carbon footprint is one of the most ambitious in the world, adds the current president of the GSMA, with the objective of achieving carbon neutrality by 2050, in accordance with the Paris Agreements and, if applicable, of Orange, in 2040. Regarding the criticism that 5G technology has received in France, Richard wonders “if the debate is not linked to the current discourses that oppose and challenge technology and progress”. Considers that 5G technology is made to pay for a “punitive ecology”, which vilifies the excessive consumption that favors mobile phones, tablets and computers, when in Northern Europe or in California, where ecological concerns are very important , 5G has been launched rapidly and massively.

Xavier Niel, founder and president of Iliad, a fixed and mobile telephone operator with the Free brand, assured in a mid-October interview in the newspaper Les Echos that “what pollutes is not 5G but our smartphones”, as the headline read . He recognized that an ambitious environmental policy should rethink the consumption and renewal of smartphones. “It is the only true lever to reduce the energy footprint of the sector,” he maintains in the interview.

Regarding whether unlimited data contracts should be limited, Niel responds that they are not the real problem. “Our networks have a very low energy consumption and the unlimited contract responds to a consumer demand.” And he thinks that if in these times of confinement the French are told to stop consuming so much data, they will respond that it is their decision. Operators, he acknowledges, can make those who consume more data pay more but he thinks it would be a way back, because it is already consumers who pay the taxes that are infringed on telecommunications operators.

The position of the French operators, it seems, is not very far from what is advocated by neither the French Senate nor the Arcep, perhaps because the latter implicitly recognize that telecommunications operators are not the main source of technology problems but from the consumer industry, which favors the excessive renovation of terminals, and the indiscriminate use of artificial intelligence techniques, which use too much electrical energy in its data centers.