At next week’s MWC22 there will be a lot of talk about technological evolution and greater energy efficiency of networks and the entire 5G ecosystem, but also about its economic sustainability. Operators, especially the main ones in the European Union, are concerned about the increase in network infrastructure costs due to the brutal growth of video traffic on demand, without being able to pass on broadband Internet rates and mobile telephony to consumers due to the exacerbated competition in Europe.

The four major European operators have been insisting for some time to the European Commission and national regulators that they demand that the big technology companies, the so-called Big Tech, share part of the necessary increase in investment in telecommunications infrastructure, as they are the most benefited and the ones that more use broadband networks with video-on-demand platforms and social networks. The situation has reached such an extreme that its top managers published an open letter on February 14 in the Financial Times, requesting that the investment be shared in a more proportionate way.

In the letter (see below) the operators acknowledge that digital connectivity is “simply vital for our society, our economy and, ultimately, for our daily lives.” Data traffic, which is increasing by up to 50% each year, “is the critical determinant of the size and capacity of our networks.” Telecommunications operators emphasize that they have invested massively in network infrastructure to increase their capacity and, thanks to this, communications and the Internet have continued to function normally in Europe, despite the pandemic crisis and the increase in mobile traffic and permanent.

Streaming video, games and social networks managed by a few platforms represent about 70% of all the traffic that circulates through the networks, say European operators

But, say the four operators who sign the letter, “the current situation is not sustainable” and ask that the bulk of the investment “be shared in a more proportional way.” Streaming video, games and social networks that are carried out by a few digital content platforms “represent about 70% of all the traffic that circulates through the networks.” Digital platforms take advantage of “hyperscaled” business models with very little cost while operators must face the investments required by connectivity.

The operators, they insist, “are not in a position to negotiate fair terms with these giant platforms due to their strong positions in the market, their asymmetric negotiating power and the lack of adequate regulation for the existing situation.” Consequently, they add, “we cannot have a viable return on the investment made, which puts the entire development of the infrastructure at risk.” And as the increase in traffic continues to grow, “if we do not solve this unbalanced situation in Europe, we will fall behind other regions of the world and, in the end, the quality of the experience [of telecommunications] for all consumers will be degraded. ”, they add.

In search of a shared investment

Investments in shared infrastructure, as they say in the letter that they are trying to make in South Korea and the United States, “are also vital to accelerate green connectivity and digital technologies that will contribute to making economies more sustainable and efficient” . As there is no price for each piece of data emitted, the incentive for information providers to optimize their traffic is low, they argue.

In the letter, signed by the heads of Telefónica, DT, Orange and Vodafone, legislators are urged to introduce rules and laws at the European Union level so that it contributes, in a fair and proportional way, to the costs of public goods and services and infrastructure, as stated in the recent commitment of the European Commission. And they warn that, without an equitable solution, the connectivity objectives for 2030 established by the European Commission in its communication of the “European digital decade” cannot be achieved. 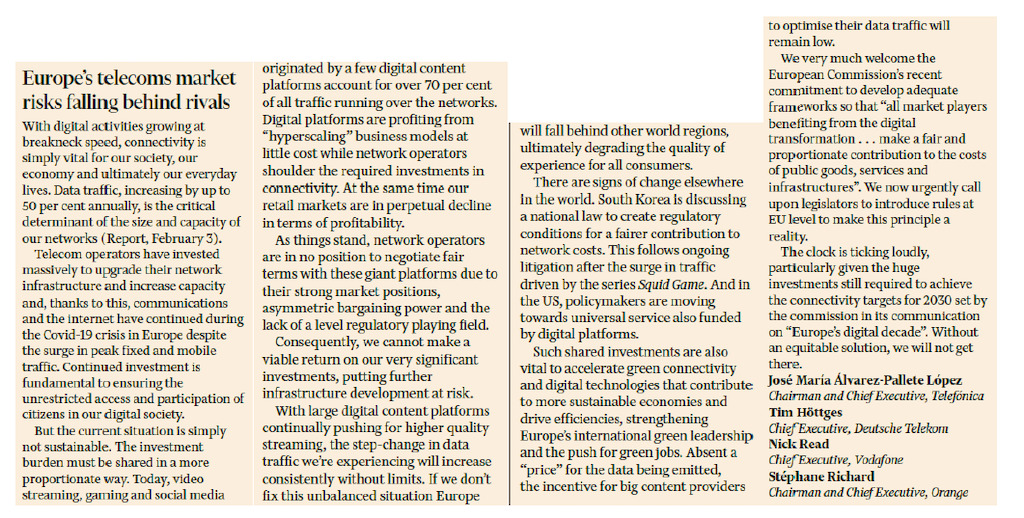 It is not the first time that the large European operators have expressed themselves in such dramatic terms and have sent their complaints to the heads of the European Commission and the current vice president and competition commissioner, Margrethe Vestager, is perfectly attuned to the situation . But it seems that this situation is entrenched, because the years go by and a remedy that minimally satisfies European operators and does not weigh down technological development does not seem to be found.

As stated in the letter, in recent years the need for environmental sustainability has been added to the economic sustainability of the operators, because the increase in traffic goes hand in hand with the increase in electricity consumption, almost proportionally. It is true that 5G networks are much more energy efficient, per transported data, than 4G networks and these than 3G or 2G. But several years must pass for this greater efficiency of 5G networks to be effective and to be translated into reality, in parallel with its technological development, as happened with 4G or the previous ones.

The problem is that data traffic increases every year much more than the greater efficiency of the networks, with which the global energy consumption grows without stopping. It is of little use to use more renewable energy for the operation of networks, because it is energy, after all, and that, in any case, could be used for other purposes. And since Internet usage rates are usually unlimited, there is no incentive on the part of technology platforms to reduce energy consumption by streamlining traffic. Nor to privilege access to data via fiber optic cables over access via mobile networks, which consume much more energy and have a higher overall cost.

Complaints from European operators, especially about excessive regulation, are repeated, as they did at MWC 2021 last June and will probably complain again at MWC 2022 next week. In the open letter, however, emphasis has been placed on the need for Big Tech to share, at least part of, the bulk of the investment in networks, as well as the strong competition that this entails for their business. Although, in the meantime, they establish technological agreements, especially in the cloud.

ETNO warns of the financial deterioration of the operators

At the beginning of this month of February, ETNO, the association that brings together telecommunications network operators in Europe and acts as a pressure group, presented the State of Digital Communications 2022 report, prepared by the American consulting firm Analysis Mason, in which highlights that European telecommunications operators have invested heavily in fiber and 5G networks in recent years.

However, the ETNO report also emphasizes, “the financial health of the sector is suffering” and, despite the investment effort, Europe is lagging behind its global competitors in several global indicators, such as coverage, deployment, use, spending and billing. “For the sustainability of the sector, strong political action should be taken to substantially improve the investment climate,” warns ETNO in line with the open letter from the four major operators.

The report ensures that the European telecommunications sector invested 52.5 billion euros in 2020, compared to 51.7 billion in 2019, which represents an investment intensity (proportion of turnover allocated to CapEx) of 19%, the highest in the recent history of the sector and above the United States, South Korea and Japan, although insufficient to maintain competitiveness with the other advanced regions of the world.

The four major European operators demand, in an open letter, that Big Tech contribute to investment in the EU telecommunications sector, for their own sustainability and mutual benefit

In telecommunications services, Europeans spend less than other regions. According to the ETNO report, the average monthly expenditure in Europe per capita is 33.8 euros, while in the United States it is 71.1 euros and in South Korea it is 36.1 euros. The average cost of mobile telephony per month is 14.4 euros, considerably lower than that of the United States, of 37.9 euros, or of South Korea, of 25 euros, points out the report that ETNO has commissioned from Analysis Mason.

“The increase in investment in telecommunications and the resilience of the sector are desirable from a social point of view and are key to the plans of the “open strategic autonomy” of Europe”, specifies the ETNO report already from the summary. Therefore, he goes on to argue, “the sustainability of the sector should promote strong political action to strongly improve the investment climate”.

Key financial indicators show that Europe’s telecoms sector is suffering and performing worse than its global peers compared to pre-pandemic levels, with European carriers’ capital market shares repeatedly falling, in both the Stoxx Global Europe 600 and the Stoxx Global 1800 indices since the first quarter of 2016, confirms the ETNO report.

One of the main problems and one that has been discussed for many years is that in the European Union there is excessive competition and fragmentation, with 38 telecommunications groups in Europe, while in the United States there are three at the national level (Verizon , AT&T and T-Mobile US) and another four regionally, four from Japan and three from South Korea, the report notes. And, although he does not mention it, another three in China (plus a quarter of the state television network), which are also public, controlled by the Chinese Party, with frequencies licensed free of charge and two of the operators (China Telecom and China Unicom) share much of the infrastructure, although they compete with each other. 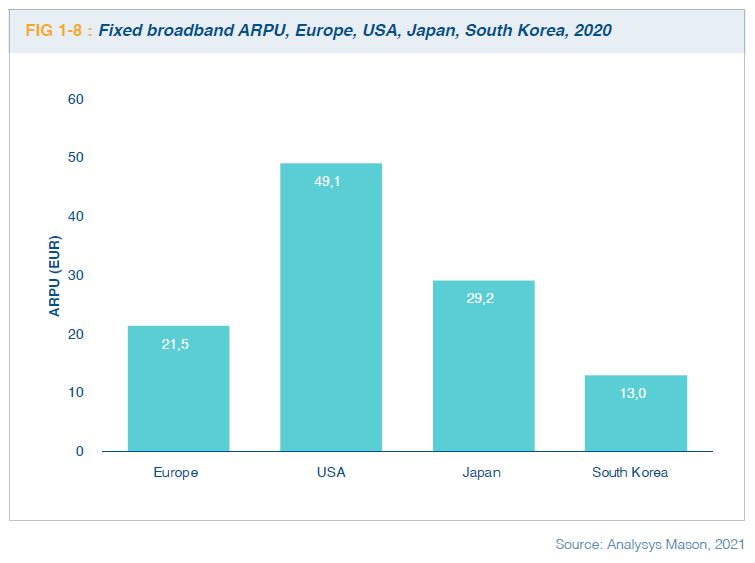 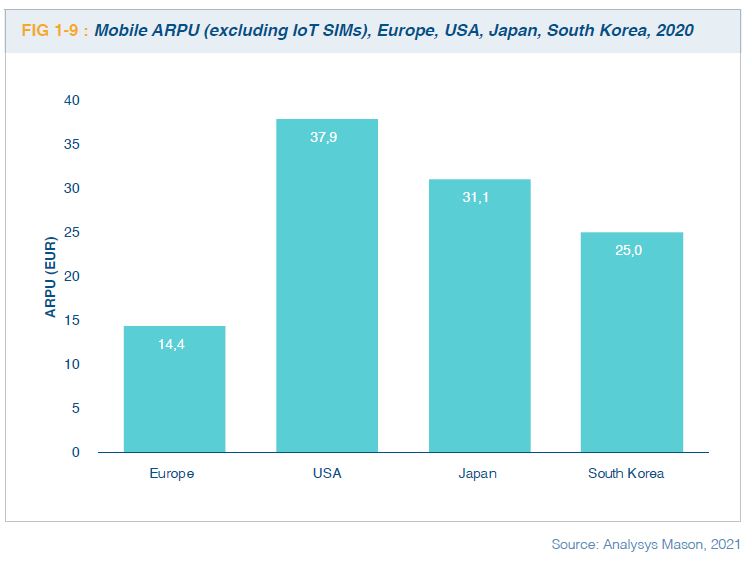 The situation of the telecommunications sector in Europe is extremely complex, with recent attempts at a greater concentration of operators at the level of the European Union or within, for example, Spain, now that the head of the British group Vodafone has suggested the need to reach agreements of its Spanish subsidiary with other operators that work in Spain (basically with Orange Spain and MásMóvil, because it is not seen that Telefónica can be part of this market consolidation due to its very high share).

These concentration operations in Europe are complicated if there is no relaxation of the conditions by the community and national regulatory bodies. And, within Spain, it is also very difficult to reach a satisfactory agreement to reduce the number of national operators from four to three, no matter how much it is talked about insistently. A recent article by the journalist Ignacio del Castillo on his blog Tecnoestrategias analyzes the difficulties of bringing this presumed consolidation to fruition.

In any case, community and national politicians, regulators and operators agree that the current status quo does not work in Europe, as far as telecommunications services are concerned and the strategy of having four operators to stimulate competition, or three in some European countries, it does not work for the overall health of the European sector, although many consumers can benefit from it with more attractive rates and by switching from one operator to another.

Without a doubt, the competitiveness of European operators will be a topic that will be talked about a lot at next week’s MWC, even if it is a global event. It will, however, be one of the many conflictive aspects in the telecommunications sector, where in Europe they are particularly relevant. Think, to give a striking example, what will happen to Huawei and its Chinese compatriot ZTE. Or if Big Tech can and should contribute more to the benefit of the European sector, and also to themselves in the end, because everything is very intertwined.