European telecommunications operators have requested a thorough review of the rules that regulate the telecommunications sector in the European Union so that the necessary investments can be made successfully in European digital networks, including 5G, and strengthen the necessary European competitiveness in the international environment, as detailed in two extensive reports that have just been published through their ETNO and GSMA associations. The president of Telefónica, José María Álvarez-Pallete, also demanded “to advance in the deregulation of the telecommunications sector and establish new norms for the digital world”, during his speech in Brussels last Monday in a debate organized by the Center for Regulation in Europe (CERRE).

The sector’s investment capacity is constrained “by persistent micromanagement and regulation based on politics rather than economics.” In other sectors of the European economy, governments set broad conditions for market development and are aware that they cannot constrain it. On the other hand, in the telecommunications sector “governments intervene in the market and artificially create new players of a reduced size and prevent it from leaving”, as can be read at the beginning of the chapter dedicated to telecommunications infrastructure in the report of the GSMA, released February 1.

If regulation continues to pressure prices, the sector will not be able to address investments for fiber and 5G deployments or new data services, assured the president of Telefónica, and European citizens will be left behind in the digital transition

The report praises the digital strategy being carried out by the European Commission, because it rightly identifies the measures necessary to strengthen the digital economy in Europe, create value by following European values ​​and establish greater digital sovereignty on the continent. But to have digital sovereignty, he recalls, “Europe must ensure that it has an infrastructure and digital services that are not exclusively defined by outside companies, with interests that are our own and in which we have limited authority.”

The European mobile phone industry considers in the report that “Europe may emerge from the reinforced Covid-19 crisis and that connectivity will play an essential role.” In the short term, he says, digital solutions will allow people to return to work more quickly and facilitate social distance. In the long term, however, “we will need to consider where we prioritize investments and recognize that economic activity may not return to pre-pandemic levels for many years.”

Prepare for after the pandemic

Some global supply chains will never fully recover and this will introduce inefficiencies into the system, he adds. But these supply chain disruptions may present an opportunity for Europe to regain its sovereignty in some strategically important areas. On the other hand, it stands out, a European telecommunications sector weakened by chronic overregulation could expose it to greater foreign control. A robust and resilient telecommunications sector, on the other hand, will also, among other things, allow Europe to meet its environmental commitments.

“The future will force us to be more resilient and digital and this calls for quick and committed action. With an increase in the pace of digitization, Europe can achieve new efficiencies linked to the new attitudes and behaviors that we are seeing in society ”. The GSMA document breaks down the three areas (telecommunications infrastructure, digital economy and a new social contract) where it considers that decisive policies must be carried out to push Europe towards greater digital self-determination and technological leadership for the benefit of all, as summarized the graph below. 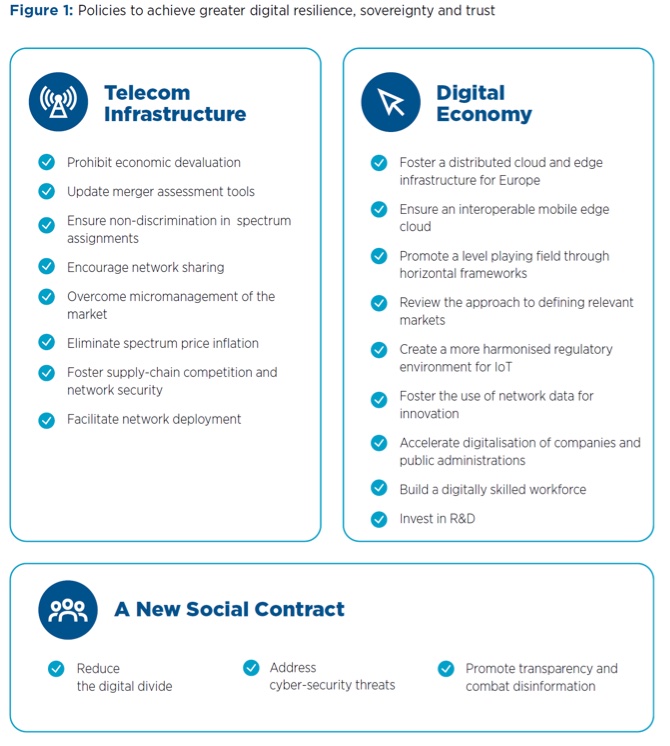 Due to the lower income of European operators, their return on invested capital (ROC) went from an average of 10% in 2010 to 5% in 2018, which means that Europe has an increasingly less attractive telecommunications market to invest . As a consequence, in the past decade, Europe has invested 40% less per capita in its telecommunications networks than the United States. And the pandemic has aggravated the situation, by increasing costs and investment requirements for operators to provide greater service, at the same time that business customers’ revenues fell.

The cost of deploying 5G will be much higher than previous generations, as it requires greater coverage density and greater complexity. The European Commission has estimated that it will cost half a trillion euros to achieve connectivity goals by 2025, including 5G coverage in all urban areas. As a comparison, in the last five years the total investment of European operators was of the order of 127,000 million euros.

Europe needs a market environment that encourages investment in critical infrastructure, even more so after the pandemic. “Because the regulatory environment has shown that it is an impediment to capital investment [in telecommunications], regulators need to promote measures that promote the financial sustainability of the sector, while ensuring that the European mobile industry is globally competitive,” he claims. the GSMA document. 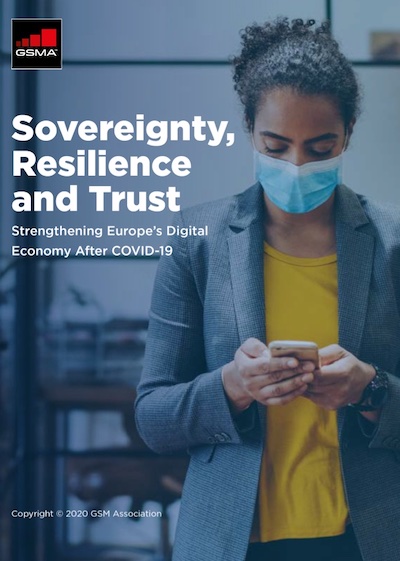 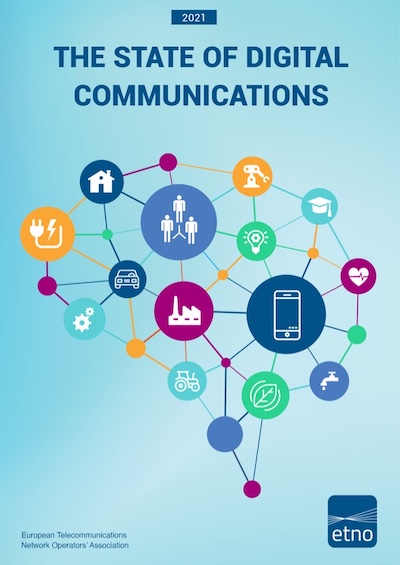 Last Friday, ETNO, the European Association of Telecommunication Network Operators, published its annual report on “The State of Digital Communications”, coinciding with the demands of the GSMA report. For ETNO, a serious problem in the European telecommunications sector is the continued fragmentation of the market and high levels of regulation, which have contributed to weakening it over the years.

All European carriers have lost positions in the list of the top 15 carriers in the last two years. In 2020 there were only four operators left on this top fifteen list, up from six in 2010. Europe, the report says, has 39 mobile phone operators, which also have low levels of digitization and demand. Average per capita data usage in Europe is 6.08 GB, compared to 11.05 GB in the United States or 8.54 GB in South Korea.

However, the report adds, there are signs that the sector’s investment capacity is highly stressed. The capital intensity of the operators associated with ETNO is 18.7% compared to less than 16% in those of the United States, Japan or South Korea. This means that European operators invest more than the others in relation to their income. Despite this, per capita investment in Europe was 94.8 euros in 2019, compared to 229.8 euros in Japan and 214 euros in the United States.

European operators continue to expand their business into areas that go beyond basic connectivity, including business models based on data, cloud and security. The turnover of operators from digital services, such as business solutions, security or remote computer management is expected to increase from 65,000 million in 2017 to 100,400 million in 2021. It is also expected to grow in IoT and grow to 838 million connections active in 2027.

Europe faces unbalanced rules of the game and outdated telecommunications policies. It is necessary to advance in the deregulation of the sector and establish new rules for the digital world, remarked José María Álvarez-Pallete

At the same time, says the ETNO report carried out by Analysis Mason, the competitive pressure of the operators by the big technology is very high. Internet voice telephony users are expected to increase from 40% of those with a mobile connection in 2017 to about 60% in 2024 and Internet messaging is expected to increase from 70% in 2017 to 90% in 2024 This will increase the penetration of large telecommunications companies in Europe, in a period in which the European Union is looking to regulate the digital services provided by large platforms, the report says.

Lise Fuhr, CEO of ETNO, assures that her Association supports the European Commission in its effort to achieve global digital leadership in the European Union. But she adds that “this requires a renewed focus on investing in 5G, fiber and digital innovation.” For Fuhr, “digital networks and services are the foundation of European global competitiveness and environmental recovery that, ultimately, will benefit European citizens.”

“Europe has to review its traditional regulation to face the revolution that 5G represents,” said the president of Telefónica, José María Álvarez-Pallete, during his participation in a debate organized last Monday in Brussels by the Center for Regulation in Europe ( CERRE), while claiming “to advance in the deregulation of the telecommunications sector and establish new standards for the digital world,” as the company specified in a statement.

“We must have an open mind as operators; Everything that can be shared and that is not differential for customers should be, and we need the support of regulators “, he defended,” because 5G is not an evolution, but a revolution. ” Álvarez-Pallete highlighted that “digitization means growth, quality employment, sustainability and inclusion.” For the president of Telefónica, digitization could contribute up to 3.2 percentage points of annual growth to European GDP until 2025.

The telecommunications sector has been part of the solution during the pandemic, he said. “We all want and need digitization,” he recalled, but to achieve this, the help of technology and connectivity will not be enough, but rather it will be necessary to “completely digitize internal processes, a profound cultural transformation and that citizens and customers are equipped with the devices and digital skills needed ”.

The only deflationary sector

In this sense, he insisted on the need to apply a new regulatory and industrial model. “If regulation continues to focus on price pressure, the industry will not be able to address investments for fiber and 5G deployments or new data services, and European citizens will be left behind in the digital transition.”

“We are the only sector that in recent years has always been deflationary,” assured the president of Telefónica. “We offer more quality and more services, but prices have continued to fall due to the artificial competition introduced in the telecommunications sector. It supposes a structural error before which a new industrial approach is needed ”, he demanded.

For this reason, he considers that “the EU must better align competition policy and industrial policy for the EU’s industrial strategy to be successful”, because otherwise the sector will find it increasingly difficult to undertake the necessary investments and find the adequate return to carry them out. “Europe can count on telecommunications operators to accelerate the recovery and increase its competitiveness on a global scale. We are the only ones who can invest and create an environment of innovation for Europe to preserve its digital sovereignty. But Europe must allow the sector to become stronger so that it can compete ”, assured Álvarez-Pallete.

She also claimed in the Brussels debate a level playing field between all market players and new rules for the digital world. “Europe faces unbalanced rules of the game and outdated policies in the telecommunications sector.” To foster competitive, resilient, inclusive and digital sovereignty, Europe needs regulation suited to the digital age that offers a level playing field. “It is necessary to advance in the deregulation of the telecommunications sector and establish new norms for the digital world,” she remarked.

Along these lines, he made several proposals for action with which telecommunications companies could already be helped: banish the desire to raise money from the sector in operations such as spectrum or 5G auctions, renew competition policies to allow consolidation on the market and stop hampering European innovation in digital services. “The telecommunications sector is essential and the time to act is now.” And he concluded by encouraging regulators to “be brave and daring, to forget the traditional regulation and adopt one adapted to the digital world.