European telecommunications operators are facing a difficult crossroads, because the numbers with the current 4G networks have not just come out and with the 5G networks less, as they require a strong investment with a very slow recovery. In the case of Spain, the situation is much more complicated by the strong competition between the four main operators, which is pushing down the prices of convergent rates. The MWC, which starts this Monday, may be an opportunity to glimpse the future that holds for 5G networks in Europe and their operators in the next two years.

The situation of telecommunications operators, especially those in Europe, given the arrival of 5G networks is very delicate, because they carry a heavy debt, profits in many cases go down and, as one of its consequences, the price of their shares are on the ground, as the profitability of the large European operators is low. In the second half of the last decade, most of the operators dedicated themselves to lightening the workforce, taking advantage of the fact that technology allowed greater automation of the services provided and the heavy investments made in the first half of the last decade in 4G networks and, by Telefónica, a large fiber optic deployment.

In some cases there has been an improvement in profitability, boosted by the transfer of assets and the outsourcing of some services to large technology companies, such as cloud services. The arrival of 5G requires a large investment that, at the moment, its profitability is not clear, at least in southern Europe, as has been highlighted in some recent studies by ETNO and the GSMA, the association of operators European and world, respectively.

The main telecommunications operators cut 230,000 jobs between 2015 and 2020, 12% of the total workforce, and last year alone 55,000 jobs were cut to achieve greater profitability and finance the necessary investments

The fragmentation of the telecommunications markets, both for fixed and mobile telephony in Europe, is one of the most cited causes, together with what European operators consider as excessive regulation. In any case, the horizon for European operators in the short term is not very buoyant. For consumers, on the other hand, it allows them to have good fixed telephony, Internet and 4G mobile services at very attractive prices, especially in cities.

This means that the majority of European consumers have no special interest in switching to 5G, at least for now. It is likely that, from the middle of next year, 5G will be more attractive in Europe with 5G SA networks, but it will also require a large investment from operators, without necessarily having very high added revenues.

The job cuts were due to asset sales, mergers and the search for higher profitability. During the first half of the decade, the deployment of 4G increased workforce as well as revenues and expenses. In the second half, on the other hand, 4G networks were already installed in most developed countries, competition increased both in fixed and mobile telephony services and this produced a reduction in margins that, in the end, led to cuts of designated template.

The greater automation of the networks also had its effect in the less employment required by the operators, together with the increasing outsourcing of many tasks to large technology, such as cloud services or the use of external data centers. The two graphs below from Light Reading show the overall downward evolution of the number of employees of the main operators and the turnover per employee during the second half of the last decade.

It is worth highlighting the reduction, by more than 24,000 people, of Telefónica, 18% of the total workforce in 2015, as well as 14% of Vodafone, 9% of Orange and 21% of Telecom Italia, all of them with very numerous templates in the middle of the last decade. Deutsche Telekom’s payroll was down 7% in 2019 compared to four years earlier, but the rise of T-Mobile US, together with the subsequent merger with Sprint in the US market in April 2020, made the total workforce of the operator Germany will remain the same between 2015 and 2020. The fall has been proportionally sharper in other operators in northern Europe, such as Telenor, Telia or KPN. In the United States, the cut by AT&T and Verizon has also been very important.

This severe cut in the workforce has caused the turnover per employee to increase in some cases while in others it has continued to decline, due in large part to the heavy debt carried over from the previous period, with the high investment in fiber and 4G networks , as is the case with Telefónica. In 2019 there was a slight rebound in turnover per employee of Telefónica, but in 2020 it fell again, indicates the table compiled by Light Reading (These indicators analyze a part of the situation, like any other economic analysis; it can occur, for example, that the turnover per employee is very high because a lot is subcontracted or vice versa, that there are many employees but hardly any subcontractors. The trend, it seems, is to subcontract more and have less direct staff).

Evolution of the billing of the main operators per employee, in dollars

The recent divestments of Telefónica, especially the sale of antennas for rental purposes, have lightened the debt and the group’s workforce and will foreseeably increase the turnover per employee. However, the sharp drop in convergent rates in Spain, due to competition with the other three large operators and virtual operators, means that the outlook is not at all rosy for any of them. Especially if very attractive 5G services are not able to be launched and that allow to bill more for them.

Orange Spain, for example, has announced an ERE to 485 people, although recently it relaxed the dismissal conditions a bit. The turnover per employee at the level of the entire French group, the former monopoly France Télécom, is one of the lowest, as is that of Telecom Italia. The turnover per employee of Telefónica and Vodafone is a little higher, but nothing to do with that of Swisscom or the US operators Verizon and AT&T. The big problem for European operators is, as has been said, that the price of their shares does not stop falling.

Lack of investment in 3.5 GHz

An added problem is that European 5G networks do not contribute much more than 4G because, according to Ericsson, the necessary investments have not been made in medium-band radio stations. In a statement made to Light Reading by Christian Leon, Ericsson responsible for networks and managed services for Europe and Latin America, the low investment of European operators in 5G radio stations that operate at the medium frequency of the spectrum, 3.5 GHz, It is the main reason that 5G networks in Europe have poor coverage and operate at speeds comparable to 4G.

The Ericsson executive’s argument is that European operators have promoted 5G with the support of technologies such as DSS, which share part of the unused 4G networks, or at frequencies below 3.5 GHz, such as 2.1 GHz, 700 or 800 MHz, which clearly give lower performance in terms of speed (although much higher in indoor and outdoor coverage than 3.5 GHz).

It so happens that DSS (Dynamic Sharing Spectrum) technology was developed by Ericsson and licensed to other equipment manufacturers. DSS, it was said two years ago, was a very useful resource to take advantage of the unused 4G part to offer 5G networks. And it is true, as the 700 or 800 MHz band is very useful for 5G, if you have the spectrum granted. But it is still a 5G network at low speed, comparable in some cases to 4G although it allows much higher applications.

South Korea or China achieve download speeds with 5G at 3.5 GHz much higher than those of the European Union, a direct consequence of having a much higher density of base stations and having invested accordingly

Ericsson’s statements must therefore be taken with some caution. It is evident that to have a 5G network in optimal conditions of coverage and speed it has to operate at 3.5 GHz, but also a greater base station infrastructure than with 4G and that the network is 5G SA, and not 5G NSA as before. in the vast majority of European countries; In other words, the entire 5G network, from the antenna to the core, is exclusively 5G.

Regardless of the reasons for the strategy used by European operators in terms of 5G, what Ericsson estimates is that the coverage of 3.5 GHz 5G networks, both in the European Union and in Great Britain, is less than 10 % of the population, when in South Korea it reaches 90% or in China close to 60%, as seen in the graph below. In Switzerland, coverage with 5G at 3.5 GHz is 46% of the population, Ericsson calculates. In the United States, a little higher, although the company alerts that only T-Mobile US provides service with a band around 3.5 GHz (the other two operators still cannot make the auctioned license work). 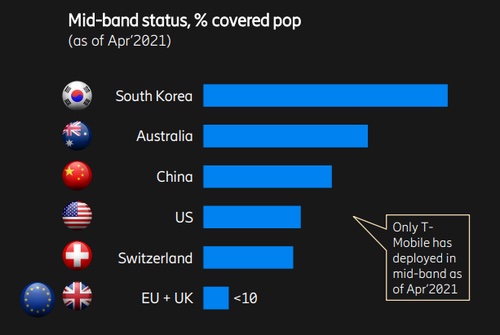 The corollary of all this, Ericsson points out, is that the average speed of 5G networks in the countries of the European Union (including Switzerland) is very low, between 120 and 200 megabits per second of download, while in the Emirates The United Arab Emirates exceeds 500 megabits per second and in South Korea a similar figure of average decline is achieved, for a much larger population. In China, the speed is hovering around 350 megabits per second, twice that of Switzerland and three times that of Germany, according to the table below from Ericsson published by Light Reading. 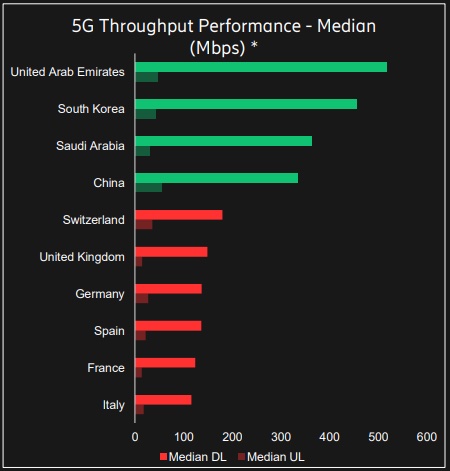 This higher 5G speed in Asia and the Middle East is a consequence, Leon acknowledges, of the much higher density of 5G base stations at 3.5 GHz. In South Korea it is estimated that there are 57 sites for every 10,000 people and in China 14, while the equivalent figure for Germany is 8.7 and France around seven, calculates the consulting firm Deloitte. China now has around 1.9 million 4G stations, of which 776,000 have been upgraded to 5G. South Korea has 290,000 4G sites, with 166,250 upgraded to 5G.

It is clear that in order to have a good 5G medium-band network, it is essential to have the proper license to use the spectrum, but accompanied by a dense network of base stations, which means a colossal investment. In low demand areas or rural centers, tricks such as DSS or the 800 MHz frequency can be used, but at the cost of sacrificing speed. In telecommunications, as in many other aspects, it is about having a good physical infrastructure, adjusted to real needs, with few possible shortcuts.