Fiber optic laying in homes in the European Union has tripled in the last five years, reaching 60 million subscribers and 118 million homes passed in 2021, according to FTTH Council Europe with data from Idate. These figures will also increase by 25% this year, reaching 75 million connected homes, and it is expected that they will grow as much again in 2023, with 90 million subscribers in the 27 countries of the European Union plus the United Kingdom. . This will make it easier to contract convergent family rates, with mobile telephony, fiber and television services included.

The greatest growth in recent years among neighboring countries has taken place in France and Italy, because homes in Spain and Portugal already had a lot of fiber for several years. In the next few years, the fiber optic explosion will take place in Germany and the United Kingdom; These two countries were far behind but for several months they have been investing heavily in fiber optic lines to homes and buildings (FTTH and FTTB), to become the most wired in Europe in 2026 (with the exception of Russia, which many years ago years that is heavily wired with fiber).

Ten years ago, in December 2012, there were only six million subscribers in the entire European Union, but this figure has multiplied by four in five years and by ten in the last decade. This great growth has been possible, evidently, to the high laying of fiber optics through the streets of cities and towns until reaching many buildings, houses and homes directly.

Spain is the European Union country with the highest fiber optic penetration, only surpassed by Belarus, and will continue to do so in the next five years, tied with France, which has made a large investment in fiber in the last two years

Spain, at the head in fiber

Spain is now one of the countries in the European Union with the largest fiber optic network, and it was much more so before France and Italy strongly increased the rate of investment in fiber network in the last two years, as reflected in the bottom graph. If the case of Russia is excepted, with 50 million homes with access to fiber and which does not belong to the European Union, France topped the ranking in 2021, with 24 million homes with access to fiber and 12% growth compared to last year. It is followed by Spain, with 16.8 million and 6% growth, and Italy, with 16 million and an increase of 46% last year.

Far behind, within the countries of the European Union, is Germany, with nine million households, despite the fact that this figure grew by 32% in the last year, and then Poland. The United Kingdom, as seen in the table, was one of the most backward developed countries in Europe in 2021, despite its larger population, with seven million homes with access to fiber, and that was the one that grew the most, 65%. In terms of homes with fiber connected, the situation is very similar, as seen in the graph below.

The situation, however, will change significantly in the coming years, if the forecasts of the FTTH Council Europe, a European association founded in 2004 and dedicated to promoting fiber connectivity in Europe as a whole, are met. Russia will continue to be in first place in 2026, with 34 million subscriptions compared to 25 million in 2021 and France will continue in second place, going from 14.6 million in 2021 to 26.3 million in 2026.

Germany and the United Kingdom were the countries with the lowest deployment of fiber optics, although in recent years they have increased investment and will continue to do so in the next five years, until they have the most extensive fiber networks

But Spain will be displaced by Germany and the United Kingdom in the coming years, due to the fact that they will have a much higher proportion of connected households than before. The proportion of Spanish wired homes has been very high for a long time, so it has little to do with Germany and the United Kingdom, which have only recently dedicated themselves to having fiber networks in their respective countries, while Spain has been doing it for over five years.

Much more fiber in Europe in the coming years

In terms of fiber optic penetration in homes, Spain has the most in Europe, with more than 70%, only behind Belarus. With 60% and more, there are Sweden and Portugal, while Romania and France touched 50% in 2021, as seen in the graph below. This situation will also change significantly in five years, as France will become the country with the most fiber, tied with Spain, with 86.2%. Next, approaching 80%, will be Belarus, Sweden and Portugal. The United Kingdom and Germany, although they improve their situation a lot, in 2026 they will have close to 60% penetration in homes.

Despite these high percentages of fiber optic penetration in Europe expected in 2026, the task that remains to be done in the second half of this decade is relatively high in Germany, Turkey, Russia and the United Kingdom if they want to reach 80%. of the population covered, because a percentage of 20 or more points of households to be covered is important in absolute terms, due to the fact that they are countries with a large population.

The bottom two charts show what remains to be done in the second half of this decade to get more connected homes; above all, within our environment, in Italy and Germany. On the other hand, little wiring will be necessary in Spain, France and Portugal, because the penetration of subscribers is already very high.

For once, the countries of southern Europe lead the lists in a positive way, even in 2020, as seen in the coverage graph below, where there is little fiber in the countries of central Europe, which tend to be more advanced in other grounds. This is due, in part, to the fact that the countries of central Europe have invested a lot in the past two decades in copper pair and coaxial cable networks, when they were the predominant technologies, and it has not been until relatively recently that they have made the switch to optical technology. 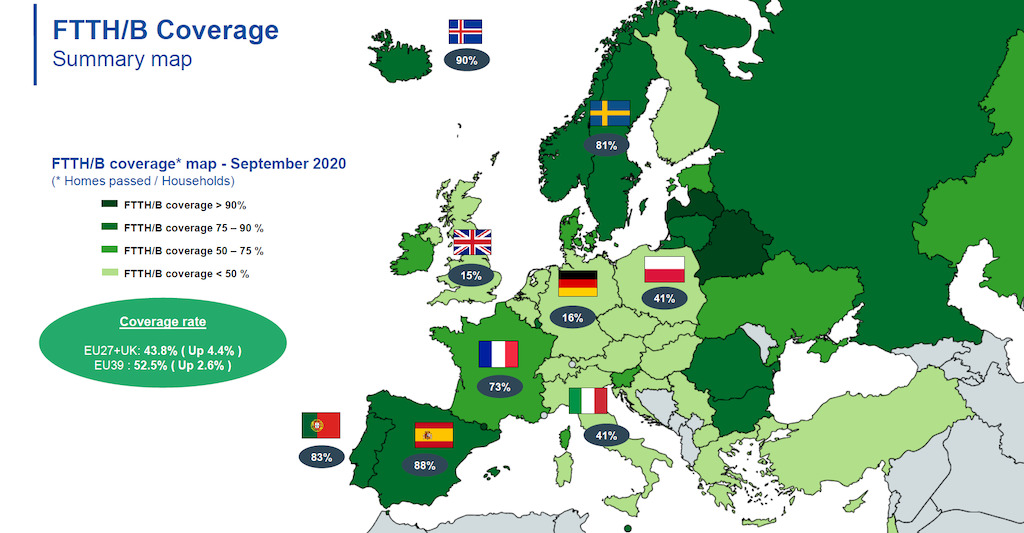 The rural environment, a pending subject

During the second half of this decade, the forecast is that the vast majority of households in European countries will have access to a fiber-based broadband infrastructure. If the average penetration of fiber in 2021 in Europe is just over 26%, by 2026 it is estimated that it will be around 50%, and more than 70% in the most advanced countries. Fiber networks will also be available to subscribers who want to, because they will pass close to most European homes.

The fiber connection of rural environments will be the challenge of the coming years, because the cities and large urban agglomerations will already be very wired with fiber or will have the possibility of connecting, because it will pass very close. In Spain, the rural connection is no longer a problem, because coverage in environments with the lowest population exceeded 60% in September 2020, the highest in Europe, while in France, for example, it was 16% and in Germany and the United Kingdom were close to 10%. It is not surprising, therefore, that in the last two years these countries have been making a great effort to reverse this situation. France, to a large extent, has already achieved it, by putting all the operators in agreement with the support of the State. 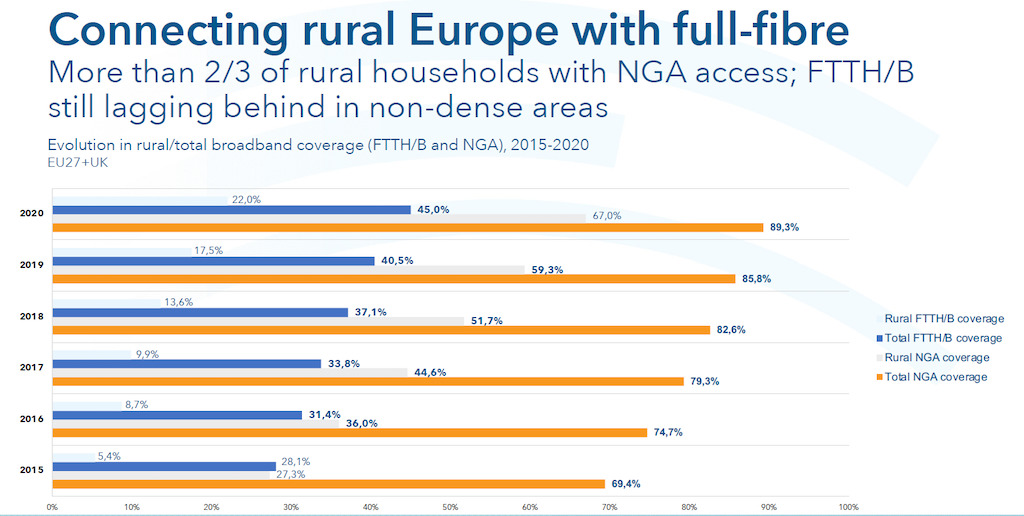 Most of the large European operators are expanding their fiber optic network while investing in new mobile networks. Its strategy is to capture the greatest number of customers subscribed to the fixed broadband network and mobile services with a single rate per household, called a convergent rate, with voice, data and television services included.

The offer of convergent services, with combinations of mobile and mobile broadband services, allows large operators to reduce marketing costs and also increase customer loyalty. Figures from Orange in Spain show, for example, that the probability that a Spanish customer who is subscribed only to the company’s fixed broadband rate will go to another operator is three times higher than if he has a convergent rate with at least one mobile connection included, according to Mari-Noëlle Jégo-Laveissière, CEO of Orange and in charge of the entire international strategy of the French operator since September 2020.

Orange has just appointed Christel Heydemann as CEO effective April 4, but she is expected to continue with the company’s fiber investment effort, as she is also doing in Spain. Fabienne Dulac, CEO of Orange in France, recently said that they have six million customers with fiber and each day they increase by an average of 10,000 daily.

The European Commission is also very interested in improving connectivity in the European Union, both gigabit optical networks and 5G mobile networks. A few days ago, it offered grants of €258 million to promote them and is now in the process of accepting proposals for the Connecting Europe Facility (CEF Digital) project, with a total budget up to 2027 of €2 billion.

Competition between different fixed network operators within the same country, however, continues to grow, with falling rates aimed at attracting new customers. A few days ago, the Italian operator Iliad announced reduced fiber rates, with incentives of eight euros for new customers who contract the new plan, at a normal price of 23.99 euros, with modem included, when rival Italian operators they offer between 27 and 30 euros per month to new customers.