The main European operators will begin to deploy open and large-scale 5G telecommunications networks from the end of 2021, based on the specifications of the OpenRAN Project Group, as revealed last Tuesday at the TIP Insight virtual meeting dedicated to Europe. Yago Tenorio, Head of Infrastructure at Vodafone and Chairman of the Telecom Infra Project (TIP), announced the immediate deployment of OpenRAN link networks in Wales and the west of the UK, with the planned installation of up to 1,150 sites in 2025 and 2,600 in 2027 on Vodafone’s UK mobile network.

The trend towards the deployment of open and disaggregated networks is at a very good pace, stressed several managers of large operators during the virtual meeting. Operators will lead the process of installing open networks with fully integrated hardware and software platforms, but also requested the support of equipment manufacturers and communications software developers to expedite and resolve problems that arise during the integration of the networks.

“The OpenRAN project is now unstoppable; We are already deploying open link networks in the commercial phase in the United Kingdom, ”said Yago Tenorio. However, “it is not an isolated event and we cannot do it alone”. “We need, he specified, to join forces and coordinate with operators, equipment manufacturers and software developers to accelerate the deployment of open and interoperable networks worldwide.”

Vodafone will install up to 2,600 OpenRAN sites in 2027 to provide purchase guarantees to manufacturers and urges other operators to make similar commitments, while calling on open equipment developers to join forces.

“We operators need the active support of the rest of the European telecommunications industry; This is a fantastic opportunity to participate in the process of building open networks, ”added Scott Petty, UK CTO for Vodafone. At the moment, he acknowledged, the industry is torn between operators who want highly perfected products at a good price to install massively and manufacturers who want substantial purchase commitments beforehand to quickly invest in their development.

Vodafone’s commitment to deploy up to 2,600 network stations by 2027 is in line with giving manufacturers greater purchase guarantees, but Yago Tenorio urged other operators to make similar commitments. At the same time, he asked the network equipment manufacturers to agree more on their respective developments, so that operators do not have to ask different things from small manufacturers, which lack the resources of the large ones.

Cayetano Carbajo, director of core platforms, transportation and services at Telefónica, announced during the virtual meeting that the first version of an OpenRAN platform with integration, distribution and continuous deployment (CI / CD) is now available for TIP members can develop advanced use cases, technology and solutions.

In software engineering, the term CI / CD generally refers to the combined practices of continuous integration and also continuous delivery and deployment, or both at the same time, the statement said. “CI / CD bridges the gaps that exist between the development of IT applications and operational activities, based on teams that reinforce automation in the construction, verification and deployment of applications.”

New developments in telecommunications networks, such as unbundling between hardware and software, increased interoperability between vendors, and the speed of new software versions, can radically transform the way networks are built and operated, enabling faster and more efficient connectivity. 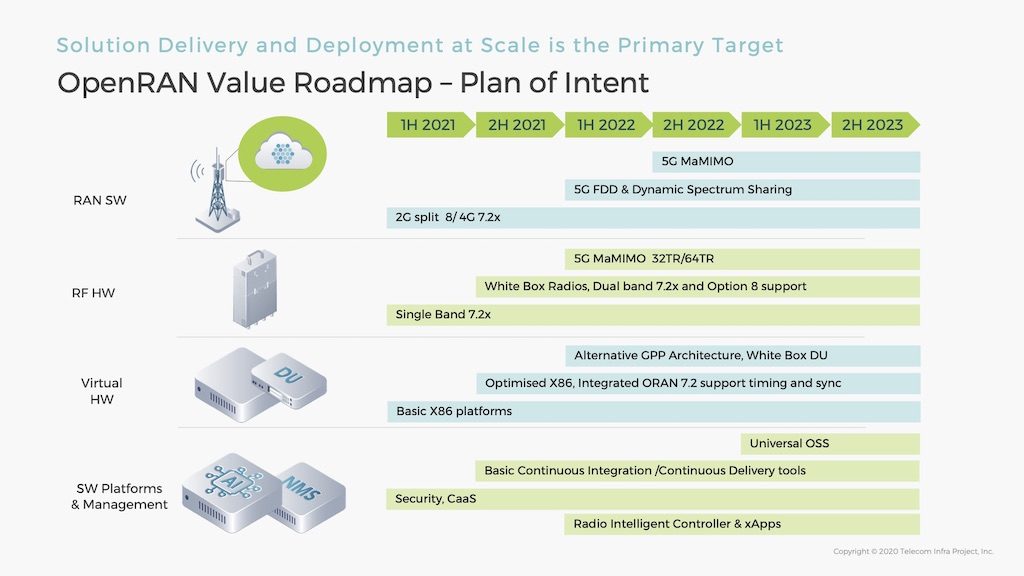 However, it is recognized in the statement, “this is only possible if operators actively develop tools to manage a more diverse value chain.” This paradigm shift is perfectly represented in the OpenRAN space, “but it can be extrapolated to other parts of the network.”

CI / CD tools will enable operators to maximize the benefits of OpenRAN by automating network integration, distribution and deployment, and will help operators to offer faster and more cost-efficient services and connectivity , which will ultimately improve the quality and agility of networks around the world, ”said David del Val Latorre, member of the TIP board and director of product innovation at Telefónica in the statement.

The CI / CD platform is designed from a broad set of open source components, libraries and tools to accelerate the integration and deployment of both 4G and 5G Link Networks (RAN). It is based on microservices container technology and Kubernetes. The TIP Community Lab is part of the development of this first version of the CI / CD platform, which will allow greater innovation in technology and processes.

In the future, “we look forward to sharing this knowledge with more partners in the TIP community and we invite them to use the platform and apply it to open link networks and other parts of the network,” said Moe Motamedi, director of the TIP Community Lab. OpenRAN development is well advanced and we believe it is ripe for large-scale deployments, added Vivek Tiwary, US Network and Services Manager at Tech Mahindra, who has also actively contributed to the development of the CI / CD platform.

Telecom Infra Project (TIP) is a group of companies and organizations that develop infrastructure solutions to achieve global connectivity of telecommunications networks in a disaggregated way and independent of equipment manufacturers and application developers, because it is based on standards approved by the OpenRAN Project Group, which recently modified its structure to broaden the scope of its specifications, as announced earlier last month.

The development and deployment of open link networks (OpenRAN) is accelerating in rural, urban and residential, and high-density urban settings. Between the end of this year and the first quarter of 2021 there will be 2G / 3G / 4G deployments in rural environments, with two carrier aggregation waves, shared link networks and IoT devices, both NB-IoT and Cat-M. By mid-2021, dynamically shared spectrum services (DSS) will be available between 4G and 5G and between 2G and 4G in NSA mode in residential and urban environments, to be expanded in early 2022 in dense urban environments and, finally, there will be 5G MIMO massive in very dense urban environments between mid and late 2022, according to the calendar shown by Yago Tenorio last Tuesday.

Olivier Simon, Global Director of Innovation at Orange, assured that TIP’s Community Labs are a key pillar for collaboration between suppliers and for verifying the complex integration system. Among the top priorities of these labs are the development of open interfaces, intelligent link network controllers (RICs), and benchmark test designs.

In Europe, the main operators have laboratories of this type: Telefónica in Spain, Telekom in Germany, TIM in Italy, BT in Great Britain and Facebook, the company that initially launched the Telecom Infra Project (TIP), also in Great Britain. Britain, apart from the two it has in the United States. Orange plans to open one of these laboratories in Paris shortly. Other such labs are located in Japan (KDDI), India (Airtel), Brazil (TIM), Indonesia and the United States (Facebook, T-Mobile US and Cable Labs).

This collaboration, moreover, must be done throughout the telecommunications network: in access, in transport and in the core. In the access is the OpenRAN of TIP and O-RAN PlugFest; in the transport network the Open Optical & Packet Transport, with the physical simulations environment and the MUST (Mandatory Use case requirements for SDN for Transport); and Open Core applications and services. Orange, Olivier Simon said, is collaborating with TIP on all these aspects.

Telefónica, for its part, is focusing on the development of an open transport network, with the initial stage of i-Fusion and the final stage of Open Fusion. During this year and next, the main objective of Telefónica’s transport network is to increase the capacity of the existing 4G network, based on updating the capacity of the nodes of the IP Fusion architecture and expanding fiber optic connectivity in base stations, supplemented by increased mobile data transport capacity.

Between 2021 and 2022, added Cayetano Carbajo, Telefónica plans to launch enhanced 5G broadband services (eMBB 5G), with the general upgrade of capacity, also at customer interfaces, and distribute information processing capabilities to download the core of the net. Between 2022 and 2023, finally, Telefónica plans to introduce ultra-low latency and ultra-reliable 5G services (uRLLC 5G) by updating the hardware platforms in the nodes and the use of standard components in the connection systems.

This 5G Ready transport network will use both existing technologies now and those open for years to come. According to Cayetano Carbajo, these new open technologies and network protocols are already available, but there is a clear gap in connectivity standards in the upper stages of the telecommunications network, which affects its large-scale deployment, the operation of the operations and application interoperability.

There is still a lot of work to do, said the Telefónica executive. To this end, a new working group has been created within TIP, which is MUST, an acronym for Mandatory Use case requirements for SDN for Transport, of which Telekom, Orange, MTN, Telia, Vodafone and Telefónica are founding members. The task of this group is to define the technical specifications for different interfaces and achieve a joint standardization with other consortia, such as Openconfig, ONF and IETF, with input from MUST.