The European Commission last Tuesday presented the content of its long-awaited legislative proposals to exercise greater control over the Internet technology giants for at least this decade. These are two bills, the Digital Services Act (DSA) and the Digital Market Act (DMA). The main objective of DSA is to block illegal Internet content while DMA wants the large digital platforms to offer truthful and transparent information and not favor their own proposals. The central idea, summarized the vice president of the competition is that what “is prohibited offline is also prohibited online.”

Now begins the long process of negotiation and approval of these community bills, which could last about two years, although many countries, such as Germany, are finalizing national laws so that they enter into force before they are approved by the Community Parliament. The imposition of millionaire fines in case of non-compliance and even the obligation to sell business units in the case of very serious offense is contemplated. The tech giants have raised their voices and all their lobbyists are expected to work hard to reduce the scope of the measures that Brussels wants to impose.

The global political environment is quite conducive to putting pressure on the internet giants. This same Tuesday, Great Britain presented a bill to prohibit the dissemination of illegal content and the glorification of terrorism or incitement to hatred on large platforms, with the obligation to eliminate them from the Internet. Australia and Japan also want to adopt similar measures, while China is restricting the power of its e-commerce platforms such as Alibaba or Tencent and curbing their financial might. In the United States, the heads of Internet platforms have been called to declare in recent weeks and there are even legislative attempts to segregate them, as in the case of Facebook.

The DSA and the DMA have two objectives: to create a secure digital space that protects the rights of users of digital services and to establish fair rules of the game that promote innovation, growth and competitiveness

This Community legislative proposal could serve as a model for many other countries. Europe has been erected in the past as a spearhead for many legislative initiatives that have flourished in other countries, as happened with the privacy law (GDPR) or the REACH rules for the protection of health and the environment from compounds. of the chemical industry. The important thing for the experts, however, is that there is a powerful legal instrument throughout the Community area and that it is possible to act faster, stronger and sooner, as Brussels wants. Because without the ability to impose severe penalties, results are not achieved.

Margrethe Vestager, vice president in charge of competition, assured in her appearance on December 15 that the two bills have a single purpose: “to ensure that we, as users, have access to a wide selection of safe products and services in line. And that businesses that operate in Europe can compete freely and fairly online as they have done offline ”. And she clinched: “We should make our purchases safely and trust the news we read because what is illegal offline is equally illegal online.” 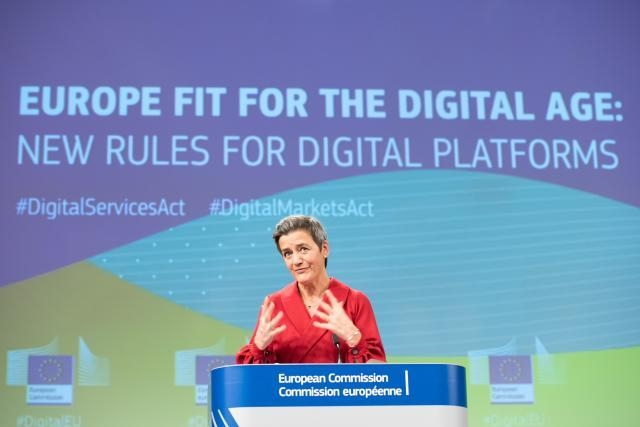 Thierry Breton, European Commissioner for the Internal Market, acknowledged that many online platforms “are playing a central role in the lives of our citizens and businesses, and even in our society and in democracy in a broader sense.” With our proposals, he specified, “we are organizing our digital space for the coming decades, with harmonized rules, ex ante obligations, better surveillance, dissuasive sanctions and measures taken more quickly to ensure that anyone who offers and uses digital services in Europe benefits from security, trust, innovation and existing business opportunities ”. 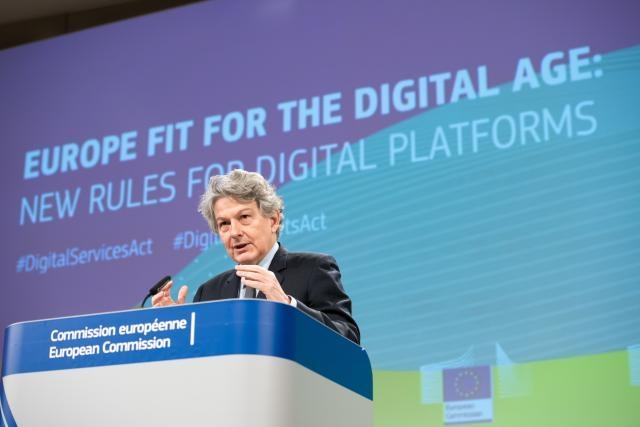 European values ​​are at the core of both proposals, to give better protection to European consumers and their fundamental rights online, giving way to more just and open digital markets for all, both community officials insisted. The landscape of digital services is different now than it was twenty years ago, when the e-commerce directive was adopted. And Vestager specified that it was also different from five years ago, when the Commission, and she as the person responsible, opened a sanctioning process against Google for abuse of a dominant position and that it is still pending appeals.

The proposed digital services law (DSA)  establishes obligations throughout the EU to all digital services that connect consumers with goods, services or content, including new procedures for rapid removal of illegal content and clear protection of the fundamental rights of online users. The framework for action seeks to rebalance the rights and responsibilities of users, intermediary platforms and public authorities so that they are based on European values.

The DSA  will introduce a series of obligations for digital services harmonized at EU level and depending on the size of these services and their impact . Very large platforms will also need to make sure they take steps to prevent their systems from being abused. Platforms that reach more than 10% of the EU population (45 million users) will be considered systemic in nature, says the proposal, and will be subject not only to specific obligations but to control their own risks and structure. The commission itself will directly supervise these large platforms and may directly sanction them.

The DMA wants to avoid the negative consequences of the behaviors of some platforms that they act as digital “gatekeepers” of the market. These platforms have a significant impact on the market and can establish their own rules and be a bottleneck between businesses and consumers, and even control entire platform ecosystems.

As an example of these practices, the proposal cites the unjustified use of business data that operate on these platforms or situations where users are locked into a particular service or have limited options to switch to another service. The DMA proposes that it apply only to large providers of backbone services prone to unfair practices and that fall within the objective legislative criteria that designate them as gatekeepers.

The most important platforms have more responsibility

If a central idea is that what is prohibited in the analog world is also prohibited in the digital world, the other strong idea is that “the more important a platform is, the more responsibilities it has,” as the two curators emphasized during their speech. The “dissuasive sanctions” are another of the basic pillars: the fines could reach up to 6% of the world turnover for the infractions of the content rules and up to 10% in the case of hindering free competition. As a last resort, they threaten to ban the service or dismantle business units.

The proposal defines a series of criteria to consider a platform as “systemic” and subject to the rules of the DMA, such as having, for at least three years, 45 million end users and 10,000 client companies, achieving a higher turnover at 6,500 million euros or a market capitalization of at least 65,000 million euros. He does not mention them, but ten actors would enter this classification, including the American Google, Apple, Facebook, Amazon and Microsoft (known as GAFAM), the European Booking and the Asian Alibaba and Bytedance (TikTok). Samsung and Snapchat could also enter.

In the end, the DSA and the DMA have two main objectives, according to the Commission: to create a secure digital space, where the fundamental rights of all users of digital services are protected, and to establish fair rules of the game that promote innovation, growth and competitiveness, both in the European Common Market and globally.

To ensure that illegal content is quickly removed, we want to put aside the “code of conduct” established by the large platforms in 2016 and which has been of little use, as well as the idea that the company that hosts content does not have responsibility over them. The regulation to be passed requires online intermediaries to cooperate with regulators to remove illegal content as quickly as possible, as soon as it is detected. Furthermore, large platforms must be equipped with special equipment for very fast action.

Each Member State will designate a national authority to regulate the networks, which will meet in a permanent council at European level. The Commission may also intervene in support of a Member State or directly, with a model similar to that of Europol in the field of terrorism. Each State may require the removal of content, even if the platform is based in another country on the European continent. In terms of terrorism, there is no problem because the action protocols are very established, but in the case of incitement to hatred, the demand for withdrawal may be more problematic. Each country also has its own rules to define what constitutes illegal content.

The European telecommunications industry has welcomed the legislative proposal of the European Commission.  As stated in its statement, “we are optimistic that the EU can establish a global framework so that digital markets are competitive, non-discriminatory, responsible and fair, in line with the DSA and DMA ”. The European Union has the opportunity to harness these digital platform markets so that our societies are more inclusive and benefit European citizens and companies of all sizes, he adds.

In taking a joint position between the GSMA, the association that brings together to the vast majority of telecommunications operators, and ETNO, the association of European telecommunications network operators, the efforts of the European Commission to create the DSA are seen as having the potential to be one of the most important technology policy exercises. important of our generation ”and proposes a series of recommendations when designing the DSA, especially when regulating“ digital gatekeepers ”.