Ericsson predicts that there will be 580 million subscribers to 5G networks by the end of this year, about 7% of the 8 billion mobile subscribers in the world, according to the mobility report just published by the Swedish company. By the end of 2026, it is expected to reach 3.5 billion 5G mobile subscribers, 40% of the total, compared to 45% with 4G. The distribution of 5G users by region is very uneven, with a very high concentration in Northeast Asia. Ericsson estimates that there were eight million 5G users in Western Europe at the end of last year, seven million more than at the end of 2019, and 360 million are expected by the end of 2026. The final take-off of 5G will take place, in this way, to over the next five years.

The Ericsson Mobility Report presents a significant advance in the deployment of commercial 5G networks, with more than 160 operators offering them and more than 300 models of 5G smartphones available, according to data in the report released yesterday. At the end of the first quarter of this year, the number of total subscribers to 5G networks was 290 million, with an increase of 70 million in the first three months of 2021.

By the end of this year, Ericsson estimates that there will already be 580 million 5G subscribers. This means that 5G subscribers will double with this quarter now ending and the next two, increasing by another 290 million. The global advancement of users to 5G networks is therefore rapid, more than that which occurred at the beginning of the last decade with 4G, but probably not as accelerated as had been anticipated. Especially if it is taken into account that the penetration of 5G is now highly concentrated in Northeast Asia and especially in eastern China, thanks to the tremendous state push for 5G by the Chinese Government since the commercial deployment began in the country in September 2019.

5G penetration is now quite high in Northeast Asia, at 9%, compared to 1% in Western Europe or 4% in North America, but this difference in absolute numbers will continue in the next five years

At the end of the first quarter of this year, there were just over 4,600 4G subscribers worldwide, 58% of the total, which is about 8,000 million today, as the graph below indicates. The growth of 4G subscribers in the first quarter was 108 million, according to the data managed by Ericsson in the report, about half more than the increase in 5G subscribers of 70 million. The number of subscribers to 4G networks is expected to continue growing in the coming quarters, albeit modestly, until reaching the maximum peak of 4.8 billion subscribers. In total, it is estimated that there are around 8,000 million subscribers in the world at the moment, which may be users with more than one subscription. Ericsson assumes that there are now some 5.9 billion unique mobile subscribers, or unique users. 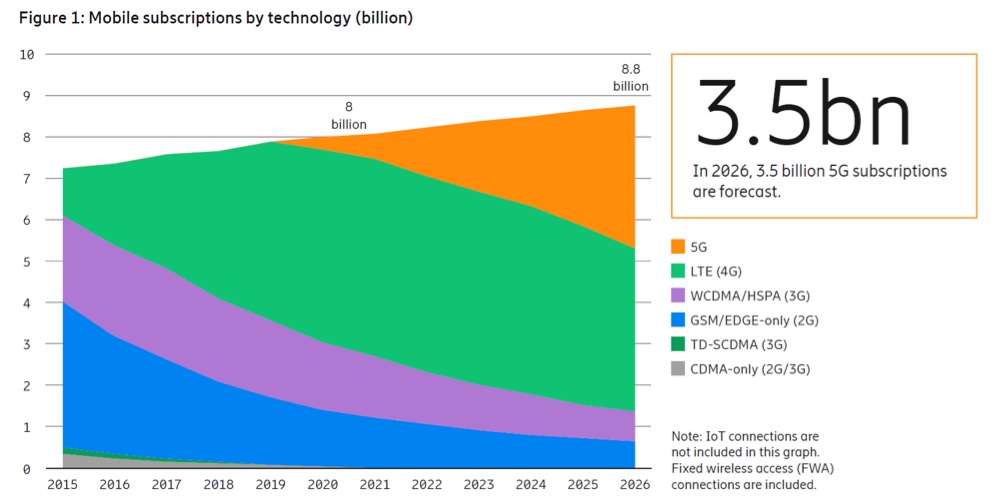 The number of 5G users will grow substantially in the coming years, as seen in the graph, in the orange area. It will go from the 580 million mentioned above at the end of this year to the 3.5 billion by the end of 2026, which is when the period analyzed by the Ericsson report ends. These 3.5 billion 5G subscribers will represent 40% of the total, while it is estimated that by the end of 2026 there will be some 3.9 billion subscribers to 4G networks, 45% of the total. The remaining 15%, about 1,400 million, will still be 2G and 3G, which is also expected to handle much less data traffic than 4G and 5G.

The logical thing is that current subscribers to 2G and 3G gradually switch to 4G and more and more current 4G subscribers migrate to a 5G line. In the next five years, there will be an estimated 3 billion 5G subscribers, adding to the nearly 400 million now. The growth, therefore, will be spectacular. In any case, it must be borne in mind that in the first quarter of this year there have been 59 million net registrations to 4G networks, compared to the 70 million 5G registrations mentioned above. As you might expect, the biggest increase in 4G highs has occurred in India, with 26 million new lines in the first quarter, compared to six million in China.

By regions and mobile technology, the distribution is very uneven, as can be seen clearly in the graph below, from the Ericsson report, and both in 2020 and 2026. 5G penetration, also in orange, is already quite high in the Northeast in Asia, 9%, which contrasts sharply with the meager 1% in Western Europe or 4% in North America. It is noteworthy that the current high percentage of Northeast Asia refers to a much larger population, at least three times the potential market, than that of Western Europe or North America.

In 2026, 5G mobile subscription percentages will grow brutally in Western Europe, from 1% to 69%, and even more in North America, from 4% to 84%. In Northeast Asia, which includes China, Japan and South Korea, the three countries with the highest 5G penetration, it will go from the already high 9% today to 65%, less than that of Western Europe and North America by then, but in much higher absolute numbers. 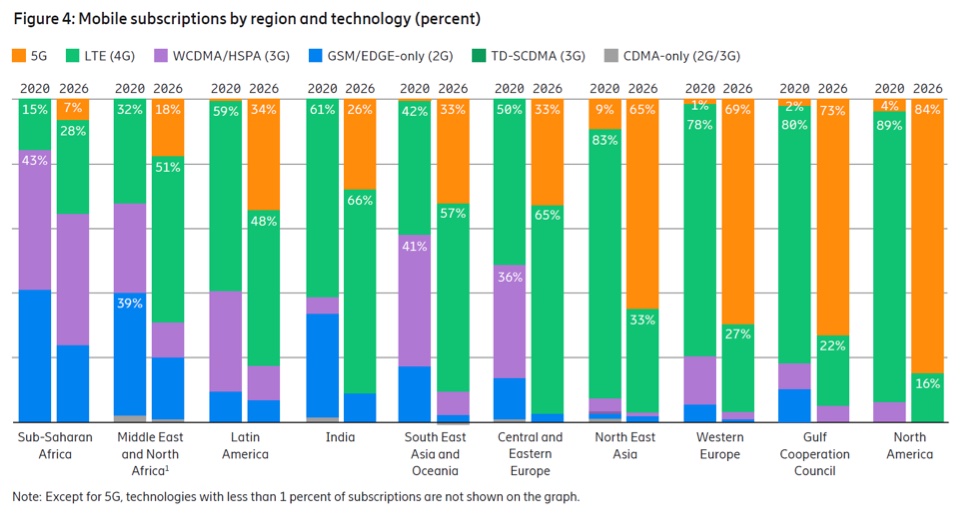 The figures in absolute numbers of 5G subscribers, both in 2020 and 2026, are much more significant when comparing the foreseeable evolution in Western Europe and North America with Northeast Asia or a part of it, which includes China. And it explains the gulf between the Asia-Pacific and both sides of the North Atlantic, which is what puts the United States on alert.

China, therefore, is decisive, thanks to the size of its population. Also India, despite having a much lower per capita income. The number of subscriptions from India will triple in 2026 to all of North America, as is also the case in Southeast Asia. Even the number of subscriptions in South and Central America is almost double that of all of North America. It is a pure question of demographics: the United States sees China as the enemy to beat but if it looks at other southern regions it may find similar threats as soon as their economies take off. One of the problems of Europe as a whole, as is relatively the case of the United States, is that it starts from a privileged economic situation, which can grow little due to demographic and raw material reasons, while in other regions of the world it is a lot of room to grow.

Mobile data explosion around the world

The Ericsson report also contains figures for the evolution of monthly mobile data traffic in the coming years, in gigabytes per smartphone and in total exabytes, which refute the perception that is sometimes held in the large economies of Western countries. they consume much more mobile data than in other regions of the world. As can be seen in the two graphs below, the annual growth of mobile data traffic and per smartphone will be very high worldwide.

Data per smartphone is now similar in Europe, North America or China and will continue to be so in the coming years, although the same will not happen with mobile data traffic, which will explode in China and all of Asia

Certainly, the growth of data traffic in China will be lower than that of North America or Europe in the coming years; This will cause China to distance itself, when it now has similar smartphone traffic. But Southeast Asia, which starts from relatively low data traffic, will grow much more than elsewhere and even slightly outperform China. Southeast Asia is a major emerging power, as will likely be seen by the end of this decade. 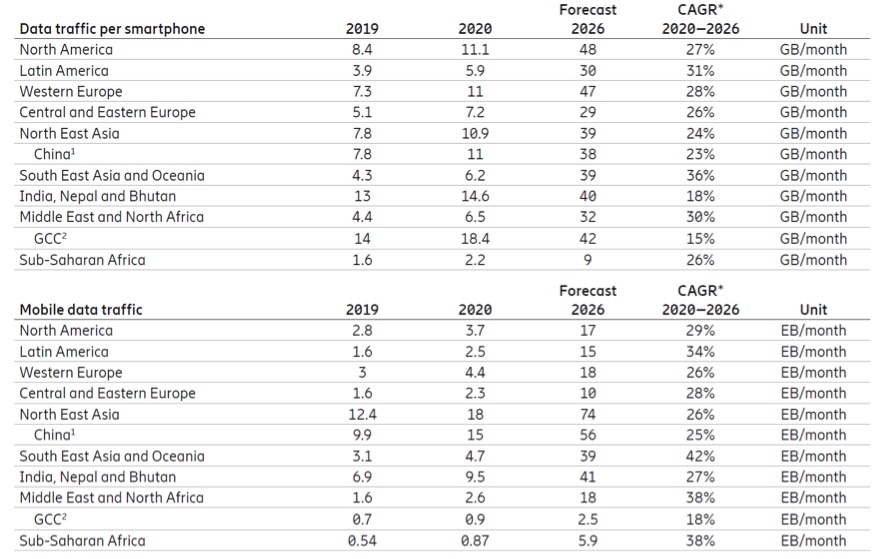 If the data traffic per smartphone is now relatively similar in Europe, North America or China and will continue to be so in the coming years, the same will not happen with the mobile data traffic in absolute figures, as can be seen in the graph above. Now, in China, and in the whole of East Asia much more, the traffic of data through the mobile network is four times higher. The reason, of course, is that in Asia, as in all developing countries, there is a very precarious fixed telecommunications infrastructure and everything goes through the mobile network. But you also have to count on the fever to use the mobile that exists for example in South Korea and Japan, much higher than China even with a good fixed infrastructure. It is clear that the future of the mobile, and specifically the smartphone, is assured.