The European global market for information and communications technologies (ICT) will continue to grow notably in 2022, 4.7%, although below this year, which the consulting firm Gartner estimates to have been 6.3%. In this way, they have surpassed 1.2 trillion dollars this year, compared to almost 1.1 trillion in 2020, and will close to 1.3 trillion in 2022. Telecommunications services continue to lead spending, 36% of the total, although the growth will come from software and services, predicts the consultancy.

After a disastrous 2020, for well-known reasons, in which only business software grew, the European market for information and telecommunications technologies (ICT) has grown significantly this year, 6.3%, totaling 1, 22 billion dollars, despite the problems of supplying equipment of all kinds, due to lack of chips and logistics.

For this year in which we are going to enter, and although there will continue to be problems in the deliveries of equipment during much of 2022, the consulting firm Gartner predicts that the wake of growth will continue in Europe, despite falling to 4.7%, a relatively high level. In this way, it will reach $ 1.28 trillion throughout EMEA (Europe, Middle East and Africa). A figure far from the trillion dollars of the end of the last decade.

The growth of the ICT market will continue to be very uneven in 2022, being more focused on software and technological services for companies and investing more in internal solutions

Growth will be very uneven, anyway, being focused on software and technology services for companies. Telecommunications services will continue to grow, as it did in 2020 and 2021, but on a very modest scale, well below inflation. In 2020, telecommunications services were one of the few ICT segments that grew, 0.9%, and this year it is estimated that 1.5% will have done so and in 2022 2%, with a turnover of 465,000 million Dollars. Despite this modest growth, it continues to be the largest business segment in terms of turnover, 36% of the total.

The largest increase, as usual, will be in business software, with an increase of 9.7% this year and the 10% forecast by Gartner for 2022, reaching 178,259 million dollars, 14% of total ICT . Business information and communications services, or computer services in a broad sense, will continue to approach that of telecommunications services, thanks to their greater growth. Thus, they will be almost 390,000 million dollars in 2022, with 8.2% increase compared to 258,000 million this year, in which they grew 7.8%. In 2020, IT services fell 1% to 312 billion.

The main change in the ICT market next year will not be quantitative but qualitative, according to John-David Lovelock, vice president of research at Gartner. “Information technologies will go from supporting business to being part of the business of companies,” he says. That is, from being a part of the cost of operations, in commercial, administrative and general expenses, to representing a cost of invoicing or as part of the cost of goods sold.

On the business software side, spending on cloud infrastructure will represent 12.5% ​​of total business spending on ICT. Also spending on Infrastructure as a Service and Desktops as a Service will be the two fastest growing segments in EMEA, at 32.3% and 31.1%, respectively, as revealed at Gartner’s IT Symposium / Xpo EMEA , held virtually, like last year, instead of in person in Barcelona, ​​as was traditional.

EMEA represents, according to Gartner, 29% of the total world spending on information and communication technologies in 2022. The consultancy estimates that next year the total world turnover will be almost 4.5 trillion dollars, 5.5% more than in 2021, compared to 1.29 trillion in EMEA, as seen in the upper and lower graph. By business segment, spending in EMEA and worldwide is proportionally quite similar, although slight differences.

The global semiconductor market has grown more than 25% this year and will grow by almost 9% in 2022, thanks in part to rising prices and supply problems, which should almost disappear by the end of 2022

Data center spending globally will be, and has been, higher in proportion to EMEA, without the decline in 2020. The evolution of enterprise software is, however, quite similar in proportion, although IT services grew in 2020 and 2021 , increasing proportionally with respect to EMEA. Spending on devices will also grow proportionally more globally than in EMEA. Telecommunications services, which registered a slight increase in 2020 in EMEA of 0.9%, fell by 1.5% globally, but in 2021 and 2022 they will predictably increase more globally than in EMEA. Globally, EMEA loses weight compared to global figures, albeit slightly, in three years, as can be seen if the two charts are compared.

As John-David Lovelock indicates in this estimate of world spending on information technology from 2020 to 2022, “companies will increasingly invest more in the development of new technologies and their own software instead of acquiring them and using them from external suppliers”, which that will make global technology spending growth slower than in 2021 globally. The same will happen at the EMEA level, adds Lovelock.

This global investment in telecommunications equipment, carried out mainly by the operators, is distributed, almost in equal parts, between access, transport and core of mobile networks on the one hand and access to broadband networks, microwave transport and optical technologies and different types of switches. In the last two years, investment in mobile access networks, thanks to 5G, has increased, but it has not been very high compared to the total. This year the total investment in equipment will have increased considerably, more than 5%, and up to 15% in some business segments, but this is due in large part to the weak first quarter of 2020, due to the pandemic, and the weakness of the dollar compared to previous years.

As is well known, the bulk of the total investment in mobile access technologies is divided mainly between three companies: Huawei, Ericsson and Nokia. In the first half of the year, Huawei’s share of the global telecommunications equipment market went from 30% to 27%, due to the blockade decreed by the United States, although the strong momentum of the Chinese 5G market meant that its sales did not drop much. globally.

The main beneficiary of Huawei’s woes was Ericsson, which increased its stake from 14.4% to 15.4% in the first half of 2020, according to Dell’Oro. With this, the Swedish firm outperformed the Finnish Nokia in the first half, which went from 15% to 14.7% in the period, largely due to the fact that its offer was not yet competitive enough due to its higher manufacturing costs. of the processor of its link networks, a situation that now seems to have resolved. ZTE, Chinese like Huawei, has grown slightly in the last two years, and now has about 10% worldwide. Korea’s Samsung has invested heavily in link networks and is expected to increase its global share in the next two years, now still at around 3% in the global telecommunications network and equipment market.

The increased investment that large companies are expected to make in the establishment and development of private 5G business networks, as well as large technology groups, will also increase the equipment market, now highly dependent on operators. 2022 is expected to be a year of heavy investment in 5G networks, especially from the second half of the year, when SA 5G networks, based entirely on 5G, proliferate.

The chip market is growing, but it is not enough

The deployments of 5G telecommunications networks during 2022, and consequently the evolution of investment, will be conditioned by the global supply of semiconductors and by the supply problems that affect the entire logistics chain. The outbreaks of the pandemic in many Southeast Asian countries, especially in Vietnam and Malaysia during the third quarter and last months of this year, has once again exacerbated the problem of lack of chips, because in these two countries they are encapsulated and verified much of the chips. Rising transport costs and inflation have further complicated the situation.

The main problem in the supply of chips is not so much in the most sophisticated that TSMC, Samsung or GlobalFoundries can make but in the billions of low-cost chips that are used in any electronic product, from a small or large appliance to a car or toy component. In highly sophisticated products, such as a smartphone, it happens that the end manufacturer may have the processor, modem, or display, but simpler components, such as power management, may be missing and cannot be completed. Apple, for example, is delaying the deliveries of its iPhone 13s for several weeks, despite its great purchasing and negotiating power, due to the lack of some of its components.

The shortage of 5G smartphones on the market will mean that the rate of use of the new 5G networks will not be as high as it would have been with more regular supplies, apart from the fact that prices are also higher and consumers ultimately opt for wait for better times to change mobile. Together, these factors add more uncertainty to the evolution of 5G mobile networks and, above all, to their use by consumers and companies.

For next year, the world semiconductor market is expected to grow 8.8%, reaching 600,000 million dollars, compared to just over 550,000 million in 2021, in which there has been one of the highest annual growth , from 25.6%, according to the most recent forecast, of November 30, from World Semiconductor Trade Statistics (WSTS), an organization created in 1986 and the most reliable source in the industry, because it welcomes the majority of chip manufacturers .

In the estimates of the evolution of the world semiconductor market, expressed in the graph below, it is seen that the pandemic did not affect the semiconductor market in 2020, since it grew by 6.8%, and much less this 2021, with growth nothing less than 25.6%. By 2022, as indicated, growth will be more moderate, from 8 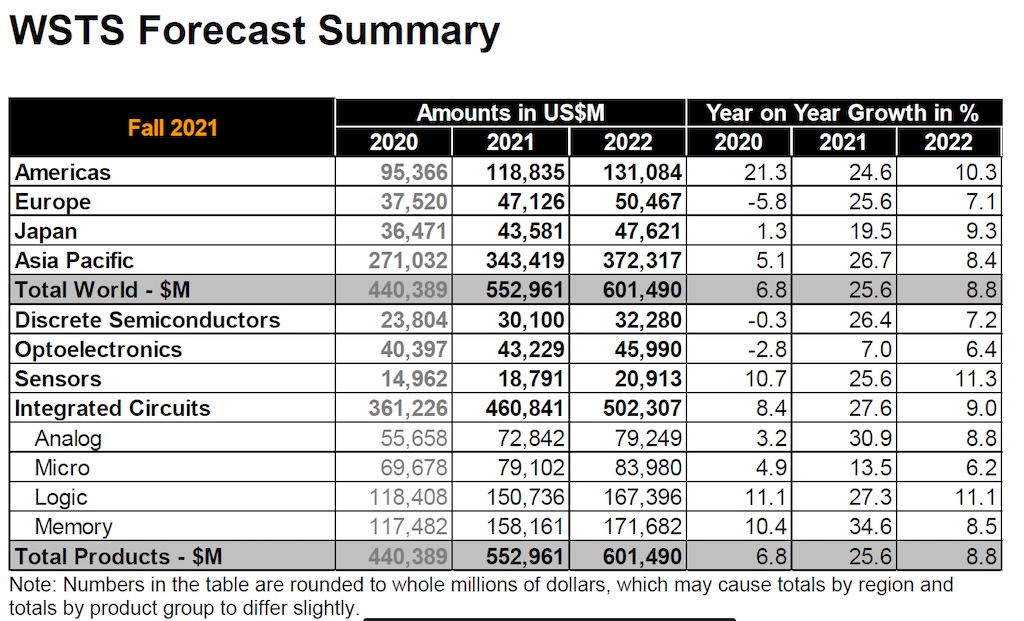 Source: WSTS (November 30, 2021). Figures rounded in millions of dollars (separated by a comma, which indicates thousands of units in English; the percentage point would be the decimal point in Spanish)

Europe has had strong growth in 2021, right in the world market average, when in 2020 it fell 5.8% and stayed at 37,500 million dollars, when this year it will exceed 47,000 million and by 2022 it is expected that they will be exceeded the 50,000 million dollars, a little higher in all cases, to the Japanese market. However, the European semiconductor market represents just over 8% on a global scale. The American, as seen in the graph below, accounts for 22%. The Asia Pacific market accounts for no less than 62% of the total. 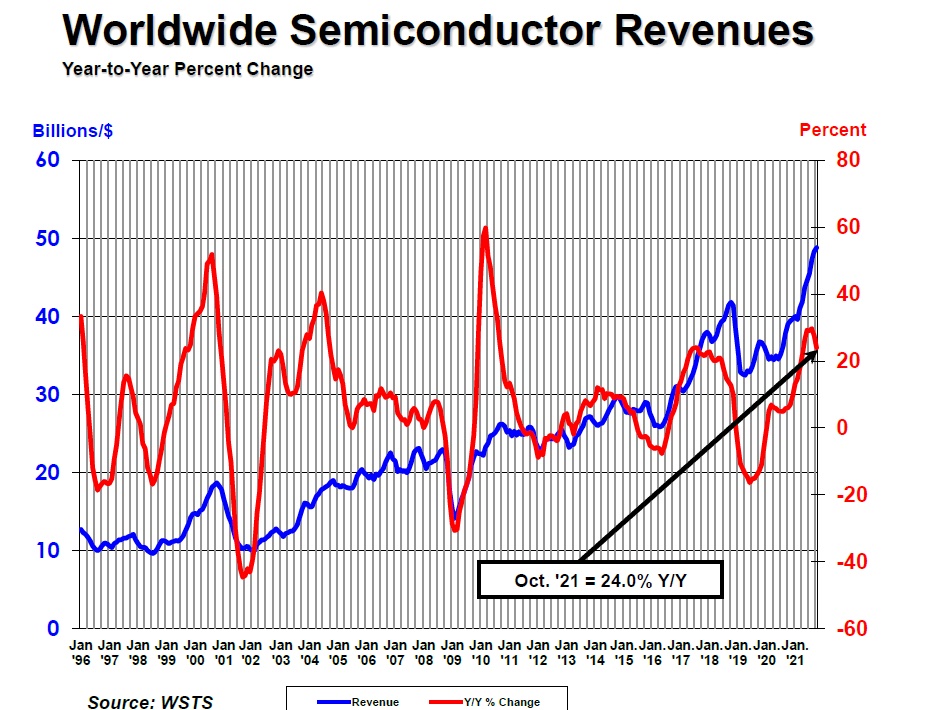 The global semiconductor market, as seen in the blue line in the upper graph of the WSTS itself, has not stopped growing in the last 25 years, and at a dizzying rate in the last three years, after the sharp decline in 2019 The global turnover of semiconductors has historically been subject to strong fluctuations in almost its entire half century of history, as clearly seen in the annual growth line in blue in the graph, although the oscillations have been smaller in the last decade. In the 1990s and early 2000s, annual increases of 40% or annual decreases of 40% soon after were not uncommon.

What was unusual, and has happened this year and in the past, is the widespread shortage of many types of semiconductors (almost all, except memory). Frequently, in times of shortage of supply or sudden increase in demand, prices would rise a lot and supply and demand were regulated enough, or prices would plummet due to lack of demand. But what happened in the last two years, due to the pandemic and logistics crisis, of absolute shortage of chips despite the generalized increase in prices, has been exceptional.

Shortages of some components, and not necessarily the most sophisticated ones, are expected to continue at least throughout 2022. By 2023 the supply and demand cycle is expected to stabilize. It will be in the middle of this decade, when the new factories that are being built become fully operational, when supply will exceed demand and prices will fall, as happened at the beginning of this century and the first decade. A situation that memory manufacturers know very well, because their business requires large investments that take several years to see the light.