The Government yesterday presented the eight new 5G pilot projects awarded in the second call, which cover a total of 82 use cases in 13 different sectors of activity. These 5G pilot projects will be developed in eight Autonomous Communities and have a budget of almost 40 million euros, of which 12 million will be co-financed by Red.es. “These projects will show the role that 5G will play in the economic, productive and social reactivation of Spain and its usefulness in essential services for our well-being,” said Nadia Calviño, Minister of Economic Affairs and Digital Transformation, in her presentation ceremony.

The eight 5G pilot projects will be carried out during the remainder of 2020 and throughout 2021 in Andalusia, Castilla-La Mancha, Catalonia, the Community of Madrid, the Valencian Community, Extremadura, Galicia and the Basque Country, in addition to the other two already awarded at the end of last year in Andalusia and Galicia, which had an aggregate budget of € 20 million. Altogether, there will be ten 5G pilot projects that will allow exploring and identifying use cases and applications of 5G technology in thirteen different sectors, such as security, education and industry, including others such as agriculture, tourism or the production of television.

In these eight new 5G pilot projects, awarded on July 30, more than a hundred organizations will take part. 36 companies will participate, organized in different consortia, which will be supported by 69 collaborating companies, underlined Nadia Calviño in yesterday’s presentation ceremony. These eight 5G pilot projects have an aggregate budget of almost 40 million euros, of which about 12 million will be co-financed by Red.es through the European Regional Development Fund (ERDF).

Andalusia, Castilla-La Mancha, Catalonia, the Community of Madrid, the Valencian Community, Extremadura, Galicia and the Basque Country are the eight Autonomous Communities that have presented 5G pilot projects in this second call

“5G services must go beyond mere technological transformation.” They must transform and expand innovation in production processes and drive change in global value chains. “It is one of the key pillars of the Spain Digital 5G strategy”. Thus, “facilitating the deployment of 5G becomes a fundamental task for the economic, social and productive development of Spain,” added the third vice president and minister of Economic Affairs and Digital Transformation.

The technology of 5G networks has a high capacity to contribute to economic productivity and territorial structuring. According to 2016 data from the European Commission, its economic impact will involve investments worth more than 5,000 million euros and the creation of more than 300,000 jobs in Spain.

The pilots will be developed by Temporary Business Unions (UTE) led by various telecommunications operators and suppliers of equipment and services for these networks. 68 public and private entities also participate as collaborators that will experience in their applications the three great improvements brought by 5G: very high speed and capacity mobile broadband, ultra-reliable and low-latency communications, and massive machine-to-machine communications.

The awarded projects will allow Spain to continue leading the deployment of 5G networks at the European level, since it is the country where there is a greater number of pilots, as highlighted in the presentation ceremony based on data from the European 5G Observatory, and that They are supported by the extensive fiber optic network that is already deployed in Spain, because in the end, fiber optic is needed to support all the data flow that is generated.

Summary of some use cases

The budget for the project in Andalusia is 1.23 million euros and will be developed by Telefónica I + D and Nokia. Use cases will be carried out in Malaga in the areas of security, smart cities, education and industry. In the specific field of security, there will be six use cases of support to the Malaga police in voice communications, traffic control of people and video transmission for emergencies, among others.

Applications of artificial intelligence algorithms will also be developed that will evaluate the images in high definition and 4K received in real time for municipal management; four use cases of virtual reality and augmented reality at the University of Malaga; five use cases in a 4.0 industrial plant for AGV (Automatic Guided Vehicle) control and three use cases of video analytics with artificial intelligence for port cameras and use of drones for surveillance in the port of Malaga.

In Castilla-La Mancha, the awarded project has a budget of 1.23 million euros and the applicants are Telecom CLM, Furious Koalas and Amanto Soluciones Toledo. The applications will be developed in the television, health and tourism sectors. In the field of television, a 5G signal will be collected from the place where the news was captured to produce the signal that will finally be broadcast in real time and in the cloud.

In these pilot projects, 36 companies will participate, organized in different consortiums, which will be supported by 69 collaborating companies, with budgets per Autonomous Community from 1.2 to 10 million euros, with almost 40 million in total

In the field of health, augmented reality images will be transmitted in real time between the extra-hospital emergency unit and the specialist doctor at the hospital. And to boost tourism, home automation and sensorization will be integrated into a medium-sized hotel so that managers can coordinate their activity and carry out, among others, remote maintenance operations.

The project awarded in Catalonia has a higher budget of 5.39 million euros and the applicants are a joint venture made up of Retevision, Xfera, Parlem Telecom, Nae Comunicaciones, Atos Spain, Increase Solutions, Nearby Computing and Lenovo.

In the educational field, remote education with bidirectional holography will be explored and, in the industrial area, the autonomous and connected vehicle. An immersive shopping experience will be generated in Barcelona through real-time communication between the figure of the “personal buyer” and the end customer in the Boquería market in Barcelona. An autonomous bus will also be developed to transport passengers between different parts of the Fira de Barcelona site.

In addition, among other use cases, an experimental 5G network is going to be launched in a tourist area of ​​Gavá beach, in the outskirts of Barcelona, ​​which suffers very different variations and peaks in the number of users. There will also be experiences in the field of television and security, with a video analytics system that allows security agents to have more information.

For the Community of Madrid, the project that has been awarded has a budget of 2.46 million euros and will be developed by Telefónica and Ericsson. In the field of industry, a private 5G network will be developed to increase operational capacity and efficiency, as well as reduce costs for logistics and distribution centers. The capabilities of on-demand networks (network slicing) will also be tested to be able to offer several mobile networks in one and simultaneous translation services will be generated in real time.

In the area of ​​mobility, there will be real-time coordination of communications between drones and, in the area of ​​television, remote production of professional multi-camera video that allows remote control of cameras and access for filmmakers to a cloud production. In the field of health, the use case consists of providing real-time connectivity and interactivity to multiple sclerosis patients connected in virtual rehabilitation rooms, allowing them to do group rehabilitation from home.

In the field of education, meetings with holography will be explored: a volumetric video capture system, where special cameras capture the body of a person in real time and in 3D, and are projected onto a virtual space or in augmented reality in a remote place.

The Valencian Community project has a budget of 10.15 million euros, making it the highest of the eight now awarded. Orange, Huawei, Arborea Intellbird, CFZ Cobots, Global Omnium Idrica, Etra Research and Development, Red Eléctrica y de Comunicaciones Innovación and Robotnik participate. A use case will be the use of 5G as a backup network to ensure critical communications offered through other technologies (fiber optics, mainly). In the field of tourism, it will seek to improve the visitor experience through the use of augmented reality.

Another use case will be a platform for communication between displaced personnel, such as workers from the Port of Valencia or emergency teams from the Valencia City Council, in this case, and expert personnel, sharing video and audio in real time, with reality functions. increased for the resolution of doubts and incidents. Also in the industrial field, remote controlled transport robots will be developed to automate logistics.

In the field of health, the diagnosis of skin cancer will be explored using the 5G mobile communications network. The specialist will explore the patient remotely using robotic arms that have incorporated biometric sensors that capture and process the information.

In Extremadura, the project has a budget of 3.14 million euros and Telefónica and Gamma Solutions participate in it, which will develop a comprehensive training platform in minimally invasive surgery that allows medical students and residents to access educational material from large volume such as preoperative studies or live surgeries. In the field of mobility, there will be experiments with the transport of people within the Cáceres campus of the University of Extremadura through autonomous vehicles. The transfer of vehicle handling by a driver to a control center will also be explored, becoming a “virtual driver” being able to remotely control the vehicle without losing all the information that would be obtained by driving said vehicle in the traditional way.

Another use case will mix teaching at the University of Extremadura with a visit to the historical heritage of Cáceres, a World Heritage city. In this way, the impact that the implementation of 5G technology will have on mixed reality will be studied. Finally, 5G technology will be used to control a user-oriented electricity supply network.

Orange, Ericsson, Cinfo Personalized Informative Content, Gamera Nest and Optare Solutions participate in the 5G pilot project in Galicia and has a budget of nine million euros, the second most important of those awarded. In the field of security, an access control system will be put into operation in the Vigo Port Exchange, as well as a surveillance system with drones equipped with very high resolution cameras. A system that uses employees’ 5G smartphones for secure access control to the company’s corporate facilities and applications will also be explored.

In the field of tourism, a virtual reality tourism experience will be generated for visits to the Obradorio square in Santiago de Compostela with real-time information and 3D video. Use cases in the agricultural sector will also be developed to optimize the performance of farms; in education with streaming classes; real-time games for 5G mobile devices, improved user experience of ultra-fast networks and broadcasting of events.

The monitoring and control of production processes through 5G technology will also be tested. In addition, different activities will be developed to address the different cybersecurity aspects involved, from the deployments of the 5G networks themselves to the specific problems of different use cases. Other projects include asset maintenance as well as vehicle components and mass training services.

All these pilot projects have three basic objectives: to reinforce the digital transformation of companies and society, deploy use cases that promote the competitiveness of companies and the well-being of society, and ensure that communications are completely secure and reliable, among other reasons because its success depends on the quality of the service. 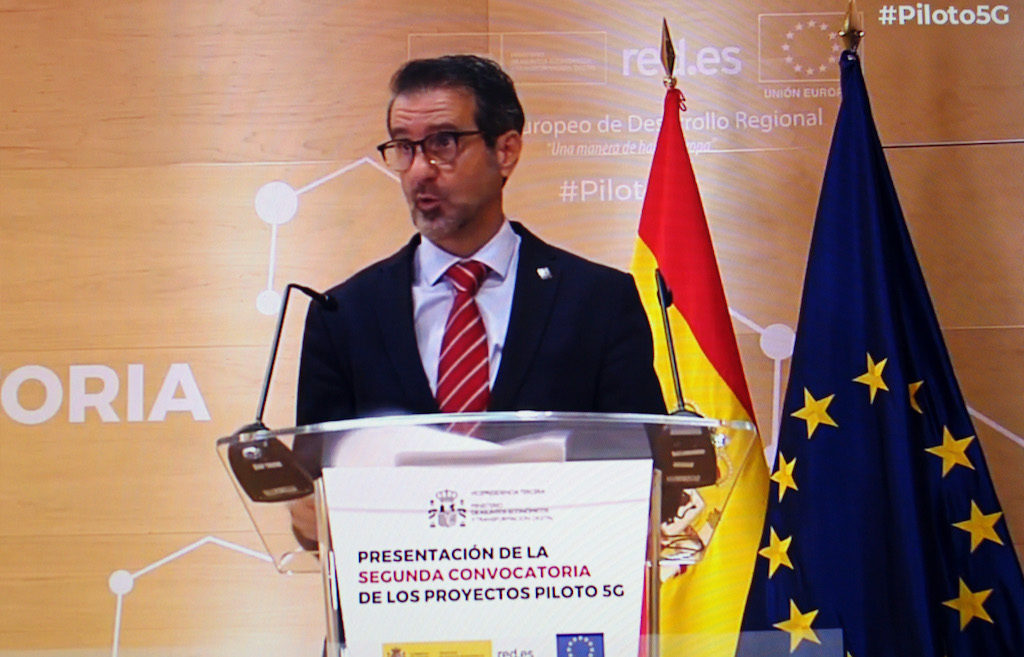 For David Cierco Jiménez de Parga, general director of Red.es, these 5G pilot projects “are an example of public policy to transform a country.” Public and private collaboration is absolutely essential to its success. Red.es finances about a quarter of the budget for these projects, through the European Regional Development Fund (ERDF). It allows participating companies to gain experience in the use of 5G technology, as well as to know first-hand the challenges and opportunities that they can achieve and an estimate of the time required for an effective start-up.