The sale of smartphones is reactivated in the second half of the year, after a disastrous second quarter, but it is thanks to the greater demand for the cheapest models. Consulting firm IDC estimates that 73% of global smartphone sales will be below $ 400 this year and an additional 9% between $ 400 and $ 600, despite the emergence of 5G smartphones. The downward pressure on the price of all smartphones seems irremediable in the short and medium term. The presentation of the new iPhone 12 by Apple, with relatively adjusted prices, confirms this.

The main consulting firms forecast that the world demand for smartphones will fall between 10 and 11% this 2020. It will not be as high as expected at the beginning of summer, which was 15%, although it was equally important; It is also aggravated, because in the previous two years there was already a slight decrease. It is now expected that in 2021 the global demand for smartphones will change sign and grow between 10 and 12%, according to the consultants, but even so, the units of 2019 would hardly be sold, a year considered bad.

The strong downward price dynamics of all smartphones is due to the pandemic and economic uncertainty, but also because there are not enough incentives to renew the devices that we already have, much less acquire a model of the highest range, above $ 800. 60% of the 5G smartphones sold this year are below $ 400; naturally, all of them in China, because in the West it was difficult until recently to find them for less than $ 800. 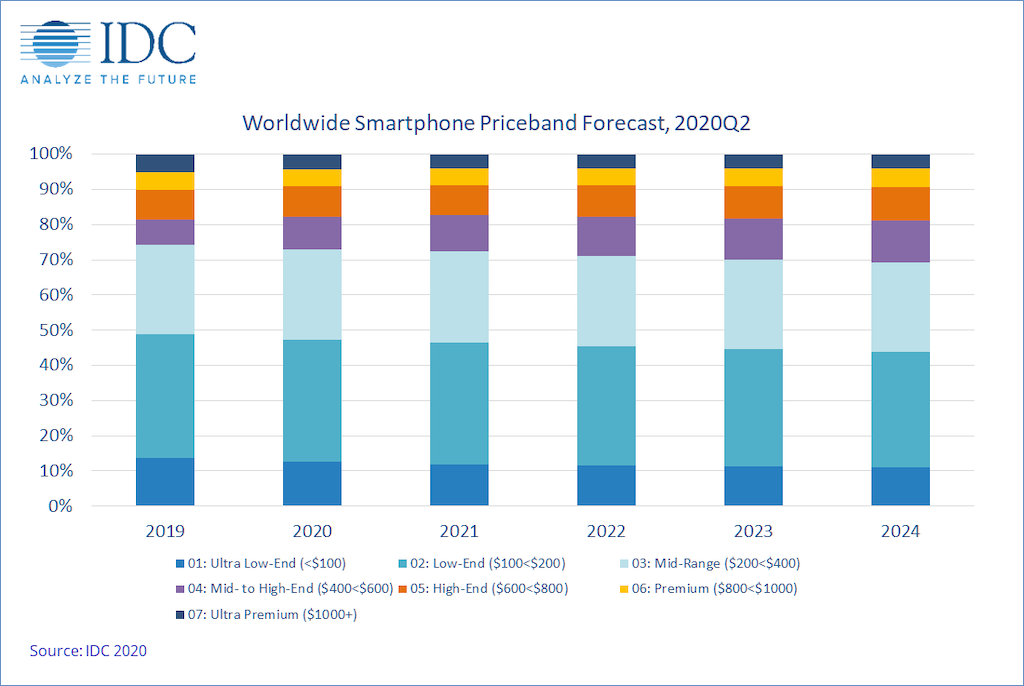 There is no doubt that the price of 5G smartphones will drop drastically over the next year, following the trend that has been seen in China in recent months. So far, its price in the United States and Europe has been very high, in the vicinity of 1,000 euros, monopolized by Samsung’s S20 5G, by far the best-selling model in the West. It wasn’t until recent weeks that Samsung started promoting its more affordable A-range of 5G smartphones.

Strong competition from Xiaomi and Oppo

The competition, especially in the various European markets, will come from two Chinese manufacturers: Xiaomi and Oppo. Both are already taking advantage, even in the immense Chinese market, of the supply problems of strategic components that Huawei is already beginning to have. And especially for its sales in Europe, because Huawei cannot include Google services, which are highly appreciated and used by European consumers.

Xiaomi has just presented three 5G-compatible models of its flagship Mi 10 range (10T, 10T Pro and 10T Lite), with prices ranging between 279 and 599 euros, depending on the size of the screen and the features of the different SnapDragon chipsets. Qualcomm and the cameras that they incorporate in their different versions. Xiaomi is the fourth largest supplier of smartphones in Europe, after Samsung, Huawei and Apple, but its share rose from 6% to 13% last June while Huawei’s fell from 22% to 16%, according to data from Counterpoint. According to this consultancy, Samsung has a 35% share in Europe, followed by Apple with 17%.

Oppo is the other Chinese manufacturer that has big plans for the European market for 4G and 5G smartphones, especially after the announcement last Tuesday of a contract with Deutsche Telekom for the supply of significant quantities of the Reno 4 series in Germany, the Netherlands and Poland. Oppo also foresees large supplies of its 4G and 5G smartphones with Telefónica, Vodafone and Orange.

Apple’s iPhone 12 will invigorate the 5G market, especially in the United States, due to the great presence of the brand and because they have been set at a competitive price compared to the rest of the iPhone

Oppo is the fifth largest smartphone manufacturer in the world, although the second in the Chinese market. Oppo is little known in Europe, because it did not begin to be introduced until late 2018. But by 2021 it expects to have a share in the European smartphone market of at least 5%, according to Alen Wu, vice president of the company and responsible from global sales to the Nikkei newspaper. In the next three years, Oppo wants to be one of the main suppliers of smartphones in Europe, with a 10-15% share, which is the minimum to be considered a market leader and break even, according to Wu.

The situation of Oppo, as well as Xiaomi or Vivo, another large Chinese smartphone manufacturer, will largely depend on what happens to Huawei in the coming years with access to strategic components due to the US veto. A couple of days ago, the Reuters news agency, echoing a story published by a leading Chinese analyst on Weibo on Monday, published that Huawei is in talks with the Digital China group to acquire the assets of Honor, its second brand. , along with other investors.

Honor is a wholly owned subsidiary of Huawei, as is HiSilicon, Huawei’s unit dedicated to the design and manufacture of semiconductors. Honor’s brand, its assets, logistics chain, and business strategy are completely separate from Huawei, although Huawei’s published market shares always encompass Honor’s sales. If Honor is finally fully segregated and sold to other independent Huawei investors, it is presumed that Honor would not be affected by the US veto on Huawei, although it remains to be seen. The operation is valued between 15 and 25 billion yuan (between 2.3 and 3.7 billion dollars), and TCL and Xiaomi would also be interested, according to Reuters.

Apple goes to 5G with the iPhone 12

Apart from the difference in price between the American and European markets, mainly due to taxes, the performance of the chipset, which makes them compatible with 5G, will not be the same. Apple has given great detail regarding the performance of the cameras, speakers and screens of the different iPhone 12 models, but has completely silenced the brand and model of the main feature and novelty that differentiates the iPhone 12 from all previous models, which is its compatibility with 5G signals.

The only thing that was revealed by Tim Cook, president of Apple, in a pre-recorded speech and broadcast at the same time around the world through the Internet (except on the highest-rated Chinese websites) is that the models destined for the United States will work with millimeter bands, other than those below 6 GHz. This means, by default, that models sold outside of the United States will only work in the bands 3.5 GHz and below. At the moment, it is not a big problem, because outside the United States there are no commercial 5G networks that operate above 6 GHz. But a non-American iPhone user who travels (when possible) to the United States will not be able to use it if it exists millimeter coverage.

The 5G chipsets of the iPhone 12 are supposed to be from Qualcomm, but it is not known whether the models destined for the United States will be of the same range and performance as those destined for the international market, apart from the lower operating frequencies. Qualcomm has, at the moment, several ranges of 5G chipsets, some of which are manufactured by TSMC and others, lower level, for a few months Samsung.

When they are put on sale and can be disassembled, it will be possible to know specifically which chipset each iPhone 12 model carries in each market. It is still surprising, in any case, that the main novelty that the iPhone 12 incorporates, its ability to work with 5G signals, has not been specified. And also that the iPhone 12 will work in 4G mode by default and, when there is 5G coverage, it will then go into 5G mode.

The US market, very different from the rest

There is no doubt that the new iPhone 12 models will be a great success in the United States and will completely energize the market, both because of the great prestige, presence and brand loyalty that Apple enjoys among US users and because they have been set at a price which is very competitive in relation to the rest of the iPhone model range.

Despite the undoubted novelty that its 5G capacity represents, it is more than likely that Apple has adjusted the sale price for two reasons. Firstly, because 5G coverage in the United States is, and will continue to be, very low in the United States in the coming months and with real transmission speeds very close to those of 4G. Second, because Apple will have to face great competition from 5G smartphones, both in price and performance.

The presence of the iPhone 12 outside the United States remains to be seen. Apple has done everything possible not to see its presence reduced in the very important Chinese 5G smartphone market, but the commercial conflict between both powers, Chinese patriotism and, above all, the impossibility of WeChat working, due to the veto of the Government of Trump, they hamper his chances.

In the various European markets, Apple’s presence during 2021 will largely depend on the promotion made by the respective operators and on the greater real 5G coverage, with transmission speeds much higher than with 4G. More important, however, will be the evolution of the economic situation and the pandemic. As long as the confinement continues, even partial, it does not make much sense to change smartphones.