The global demand for smartphones, computers, televisions and electronic equipment in general is slowing to a forced march, according to some manufacturers, due to global supply problems of chips, materials and basic components. These supply problems make finished products more expensive, in turn causing demand to fall in a negative spiral, especially in the consumer and educational markets.

For several months now, the average sales price of smartphones and computers has been increasing, both due to the higher cost of components and the tendency of manufacturers to favor the supply of high-end products, which have more margin. With the rise of the pandemic, the demand for computers and laptops soared, motivated in large part by more work and studies at home, which caused the accelerated and forced renovation of devices, which has already been done.

The global market for personal computers grew by just over 13% in 2020 and 14% last year, reaching a figure of 340 million units, when it was typically around 250 million units. During this quarter that has now begun, global PC demand is expected to fall by at least one digit and JP Morgan estimates that it could fall 6% in all of 2022, with which one could be talking about a sale of 320 million units .

The global demand for smartphones and personal computers, laptops and tablets is slowing down, warns Mark Liu, head of TSMC and a privileged observer of the situation

In any case, one thing is sales in units and another is the global turnover figure. The average price of loose graphics cards, which are used by the most powerful computers, such as those used for rendering tasks or video games, has doubled in some models and the average price of computers has also increased. In addition, the greatest demand for computers occurred in the last two years in the educational and entertainment market, which is now the one that has slowed down the most, especially since many had already been renewed.

It would not be surprising, therefore, if the market for personal computers and laptops fell measured in units but increased or remained the same in value in 2022. The demand for laptops that work with Chrome, the cheapest and widely used in the educational market , could fall 40% and stay at 20 million units, according to some consultants. On the other hand, the demand for computers destined for the business market could increase, even if they are more expensive than before, because they are needed to carry out the usual digital transformation.

The main problem is not necessarily in the supply of processors or memory, but rather in the many relatively low-priced components required to manufacture and assemble a personal computer or a laptop. As is known, much of the global assembly is done in China, which the pandemic outbreak and the partial confinement of large Chinese cities, including Shanghai and Shenzhen, have put many companies in check. As if that were not enough, tremors and power outages have occurred in many areas of Taiwan, the epicenter of the manufacture and assembly of the most sophisticated components.

The conflict in Ukraine, the embargoes on Russia and the increase in the consumer price index (CPI) in Europe and the United States also contribute to the decline in global demand for computers and to place it more in line with the usual in the past decade. Keep in mind, however, that the computer market in Russia was 2% worldwide, about seven million units in 2021, according to IDC, so it is not the main cause of what is happening in the world. of digital technology. It is rather a combination of factors that is causing the drop in global demand for computers, especially mid-range and low-end computers.

Last week, the head of the Taiwanese TSMC, Mark Liu, which supplies chips to the main assemblers of the most sophisticated electronic products and is therefore a privileged observer of the situation, warned that the global demand for smartphones and personal computers , laptops and tablets is slowing down, both due to problems with the supply of finished products and their general increase in price, due to the chaotic situation of the global supply chain, which affects all kinds of components in a cascade.

The great fear is that there are no signs that the situation is improving; on the contrary, each month that passes the situation is more complex and complicated. The problem, for many, is not the demand for finished products, but rather that the supply is not enough due to the shortage of components and basic materials, together with the sharp increase in their prices. This causes the price of finished products to increase and the demand for less sophisticated electronic products, the mid-range ones, to fall, because their final price is skyrocketing.

The global market for smartphones is also in turmoil, albeit in a different way than for personal computers. On the one hand, supply problems do not affect them as much, because the supply is much more concentrated in a few large manufacturers with great purchasing power and large margins to acquire the necessary components at a higher price. Also the supply chain is highly concentrated and localized in mainland China and Taiwan, both component manufacturing and assemblers.

As is the case with computers, the supply of smartphones is concentrating on high-end models, with a final sale price of more than $400 excluding taxes, and on models compatible with 5G, although little use is made of them. . Last year, high-end smartphones, over $400, accounted for 27% of the total, down from 23% the year before and a couple of points less in previous years, according to consultancy Counterpoint.

In any case, this barrier of 400 dollars classifies as high-end models (or premium, as the consultant says) two of the best-selling smartphones, Apple’s iPhone SE and Samsung’s A range, which are on the limit, so they could be considered high-end or mid-range; in reality, they are mid-high range, like many other Xiaomi, Oppo and Vivo models. If the barrier had been set at $600, the percentage would have been much lower, because many smartphones are sold between $400 and $600, which is where the best price-performance ratio is found.

Until now, the smartphone market had opted for high-end 5G models, but the slowdown in demand will make mid-range models gain prominence, along with their good features

What is clear is that both Apple and Samsung gained share of the global $400+ smartphone market (five and three points, respectively), as Counterpoint’s chart below shows, capturing three-quarters of the market. The increase in the share of Samsung and Apple has been at the expense of Huawei, which in 2020 had a share of 13% and in 2021 6%. Xiaomi, Oppo, vivo and others grew one or two points thanks to the Huawei embargo.

This second quarter, Apple expects to receive 20% less than the iPhone SE originally planned because the demand is much lower than initially expected, according to sources familiar with the situation and who commented ten days ago to the Japanese newspaper Nikkei Asia. Apple was originally scheduled to take delivery of three million iPhone SEs this second quarter and orders have now dropped to two million, according to the publication.

The decline in global demand for smartphones appears to be spreading across all consumer electronics markets, such as televisions, tablets, headsets, and the aforementioned computers. It is one more sign that the economic crisis and the increase in the CPI are affecting all markets, including smartphones, and that the repercussions of the Russian invasion of Ukraine are becoming more widespread.

In any case, it is still a bit early to determine what may happen in the smartphone market during the second half. On the one hand, obviously, it will depend on the outcome of the Russian invasion, but also on the economic situation of the most developed countries, the price of raw materials and the evolution of the pandemic. Many large cities in China are paralyzed, due to the zero-Covid policy imposed by the Government, and in several Western countries, such as Great Britain or the United States, the number of infected is increasing due to the lifting of restrictions, which can affect the sale of electronic products.

If demand continues to drop compared to what was expected at the beginning of the year, in the end there will be no component supply problems. Counterpoint has revised down global smartphone growth for this year, leaving it at 5%. As with computers, the units parameter matters less than the average price. The concentration of the sale of mid-range products may ultimately lower the average price of smartphones, even if there is a certain lack of components and supplies. 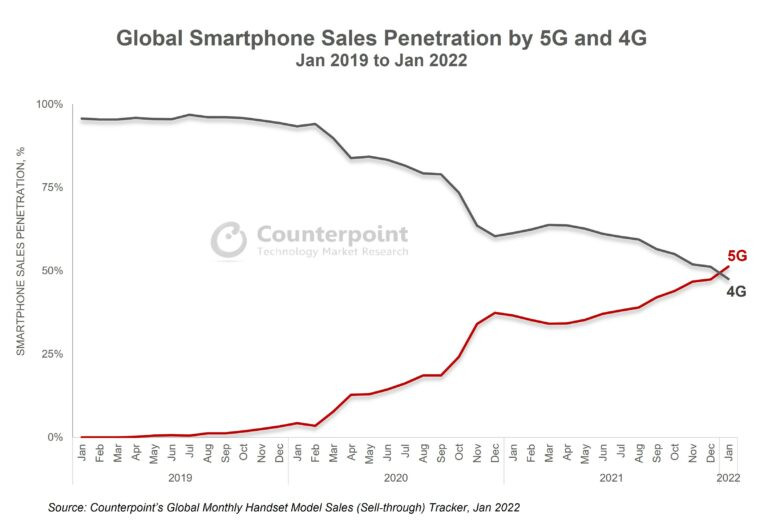 Last January, more 5G smartphones than 4G were sold worldwide for the first time, according to Counterpoint’s calculations. China, according to the consultancy, has a 5G smartphone penetration of 84%, followed by Western Europe with 76% and the United States and Canada with 73%. The high sales of iPhone 12 in the United States, the first with 5G compatibility, explains this high penetration in North America, but also the brutal drop in the average price of 5G smartphones, especially in China, compared to 4G of a similar category.

Towards the mid-range and better price-performance ratio

A fifth of the 5G smartphones sold in January were low-end for the month of January, between $150 and $250, according to Counterpoint, a price range that was totally dominated by 4G models until the end of last year. The 5G models were the exclusive heritage of the high-end, especially in Europe and the United States, with prices that exceeded 800 euros, but which are increasingly upper-middle range, around 500 euros.

In this case, Apple’s decision to release the iPhone 12 SE model at a relatively low price with very good features for its price and comparable in some way to the iPhone 12, has had a lot to do with it. The iPhone 12 SE has been a blow to Verizon, because of the model it works with 5G networks but not with millimeter waves, in which Verizon and AT&T had originally bet.

With this, 5G smartphones are increasingly similar, regardless of their range, with mobile phone functionality. Their external appearance and dimensions are very similar to each other, even with the 4G of two years ago, and the main difference is in the additional features, be it the image-taking camera, images with low ambient light or memory capacity, which can eventually be increased by inserting a memory card.

The little innovation of smartphones in recent years, at least in the provision of telephony and Internet access, has not changed substantially lately. Certainly, now most of the smartphone offer is 5G, but the traditional user hardly notices an improvement, among other reasons because the presence of 5G networks in Europe is very minority.

The slowdown in demand for PCs and smartphones, if it actually occurs in the second half, will at least have the advantage of easing strains on the global component supply chain and normalizing faster. Other recent trends, such as the rise of second-hand and refurbished smartphones, may also contribute to lower consumption of critical components and raw materials. Although the interest of the operators to promote the renting of smartphones or the pure and simple rental can increase the market.

In any case, what can be assured without great fear of being wrong is that the smartphone and computer market will continue to be very turbulent, with strong tensions in the supply chain, although to a lesser extent as the year progresses due to a slowdown in consumption of electronic products.