The global smartphone market is highly convulsed and diverse, compounded by a growing shortage of key components from manufacturers. Since the last quarter of last year, the sale of 5G smartphones has grown remarkably, reaching just over half of all smartphones shipped in China and the United States in the first quarter of this year and almost 40% at the level. global. In other regions, such as Europe, the total sale of smartphones has recovered the rate of 2019, before the pandemic, but they are mostly 4G models, with a relatively low demand for 5G. The parallel growth in billing that all this causes has led to a recovery of optimism in the channel.

In a few weeks, when the data on the sales of smartphones in the second quarter are known, the forecast for the whole of 2021 may be further refined, although to a certain extent, because the global supply chain of components and finished products is very stressed and the Trade dispute between China and the United States does not remit, especially in the case of telecommunications network equipment and smartphones. The United States Government’s prohibition, initiated by Trump and now with Biden, on the Taiwanese TSMC selling components to Huawei remains in full force, despite the fact that they are chip designs made by its subsidiary Hi-Silicon.

The virtual disappearance of Huawei from the smartphone market due to the US veto has triggered the sales of Xiaomi, Oppo and Vivo in Asia and also of OnePlus and Realme in Europe

The Huawei veto has totally destabilized the global smartphone market. The sales of smartphones by Huawei have plummeted, due to the lack of the Kirin processors manufactured by TSMC and other essential components, but especially in Europe, as the United States Government forced Google to uninstall its services in the new Huawei smartphones since the middle of last year. In China, the ban on Google services is not important, because they are hardly used and now Huawei phones could work with the new Harmony operating system that the Chinese company has just launched, but it has had a great effect on the European market , where Huawei was the second largest supplier in a market where Google services are widely used.

It remains to be seen what will happen in the second half of the year with Honor smartphones, Huawei’s former second brand, which has now been fully segregated and sold to a consortium of Chinese companies, mostly controlled by the Chinese government. In theory, the new Honor smartphones could carry Google services, because the ban exclusively affects Huawei. Models to be marketed in Europe are likely to include them, but the main stumbling block still needs to be resolved: the lack of sufficient components.

All the main smartphone manufacturers have turned to their key component suppliers in recent months and have ensured the supply of enough components, at whatever price, so that the bargaining margin that Honor now has, the last to arrive And with the shortage of chips at all levels, it is too tight to procure enough components. It also remains to be seen what will happen to Huawei’s smartphones in the Chinese market, due to its component supply difficulties.

In any case, the virtual disappearance of Huawei has been mainly exploited by the other large Chinese smartphone manufacturers, such as Xiaomi, Oppo or Vivo, which have come to occupy the third, fourth and fifth place in the global smartphone market, very close to Apple and not very far from the leader, Samsung, as seen in the following graph based on IDC data. All have gained share in the first quarter at the expense of Huawei, but the big Chinese manufacturers more. 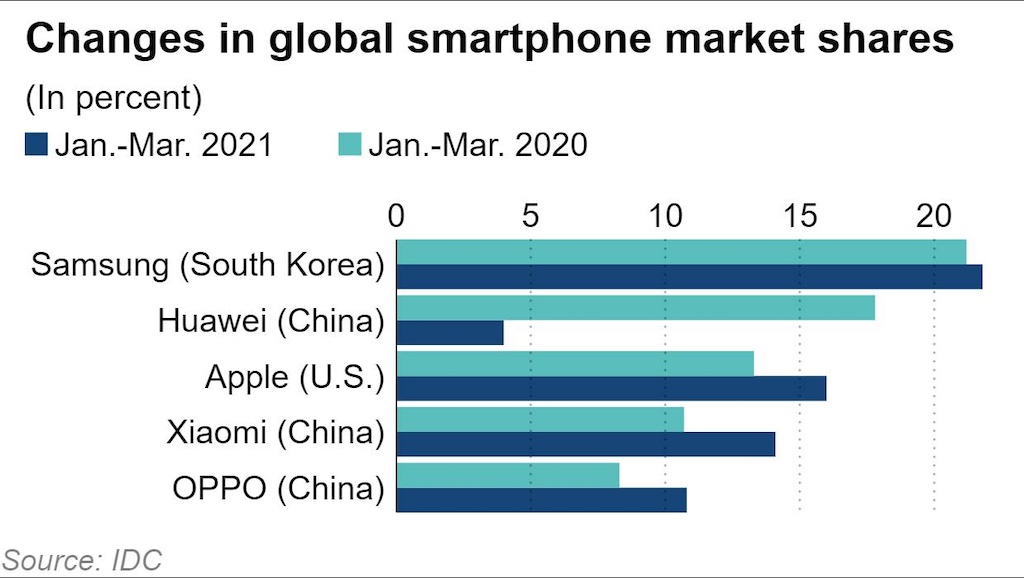 The situation of the global smartphone market is much more complex than the graph above suggests because two other essential factors come into play: the strong growth of 5G smartphones in China and the United States and their different average selling price, very different in both countries because their benefits are too. The size of the Chinese smartphone market is also much larger than that of the United States, with all that this entails.

Consulting firm Strategy Analytics predicts, in a report last week, that 624 million 5G smartphones could be sold this year, 2.3 times more than the 269 million estimated to be sold last year.

5G smartphones accounted for 40% of total smartphone sales in the first quarter, thanks to the momentum of China and the United States, and by the end of the year they may approach half of the total

The change, therefore, has been remarkable at all levels, but especially in the rise of 5G smartphones. As seen in the graph below from Strategy Analytics, 6% more 5G smartphones were sold in the first quarter of 2021 compared to the fourth quarter of 2020, traditionally the most important of the year, from 128.1 million to 135.7 million units. The one that grew the most in units was Samsung, 79%, going from 9.5 million to 17 million units. Oppo, Vivo and Xiaomi did not grow as much as Samsung, but Oppo and Vivo remained well above the Korean manufacturer. Xiaomi was the great Chinese manufacturer that grew the least, although it was next to Samsung.

It is noteworthy that Apple maintained the leadership, with 40.4 million 5G smartphones sold (that is, iPhone 12) although with a 23% drop compared to the 52.2 million in the fourth quarter (due to the effect of the novelty and Christmas). It is also relevant to note that between Oppo, Vivo and Xiaomi, that is, among the three main Chinese manufacturers of 5G smartphones, they sold some units more than the sum of Apple and Samsung. The rest of the brands, among which is Huawei, added 20.8 million 5G smartphones in the first quarter, with a 28% drop. It will be interesting to see the data for this second quarter and, especially, the whole of 2021.

The high participation of Apple with the iPhone 12 is explained by its strong dominance in the US market, where it is practically unrivaled and, in addition, it adjusted its price considerably, especially considering that for Apple a 5G smartphone was an absolute novelty US carriers fully backed the launch with promotions (to get, incidentally, a more expensive unlimited rate). In any case, the presence of the three major Chinese manufacturers of current 5G smartphones is very limited, practically nil, and Apple’s only rival in the United States is and was Samsung.

Samsung is currently in a very committed position, because the most important 5G smartphone market is by far the Chinese, where it hardly has a presence (it abandoned manufacturing in the country a few months ago). Samsung is very strong in its domestic market, South Korea, but the number of users, although committed to 5G, is unparalleled with the Chinese. The Japanese market is traditionally reluctant to Korean products, for historical reasons, and Western Europe and the Middle East, two important markets, are also not even at the level of the Korean market, despite having more potential 5G users. 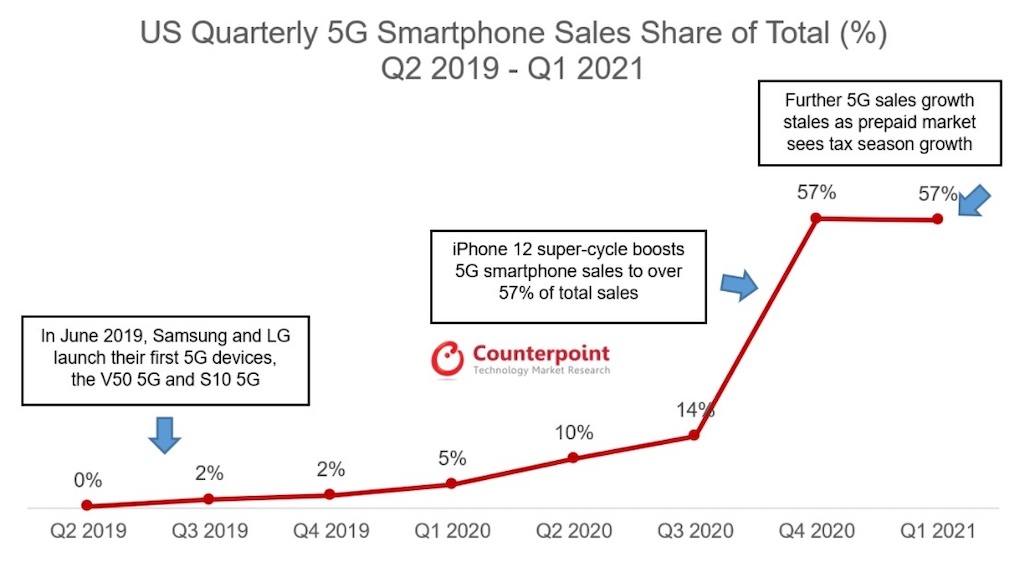 In China, sales of 5G smartphones also exceed 50% of the total number of smartphones shipped, only with sales in absolute numbers much higher than those in the United States. In the first quarter of 2021, 92.4 million smartphones were sold in China, the vast majority of Chinese manufacturers (despite the fact that Apple’s share of the Chinese market for its products is not negligible, now 13%, provided that the Chinese government does not ban them, a possibility that is always on the table in retaliation).

If you look at the global smartphone market as a whole, you can see the sharp swings that have occurred in recent quarters, as shown in the IDC chart. In units, Apple took the lead in the fourth quarter, although Samsung has now regained its global leadership position. The sustained growth of Xiaomi, Oppo and Vivo is evident and, as a large part of their sales are of 5G smartphones, the average price at which they sell is also high. 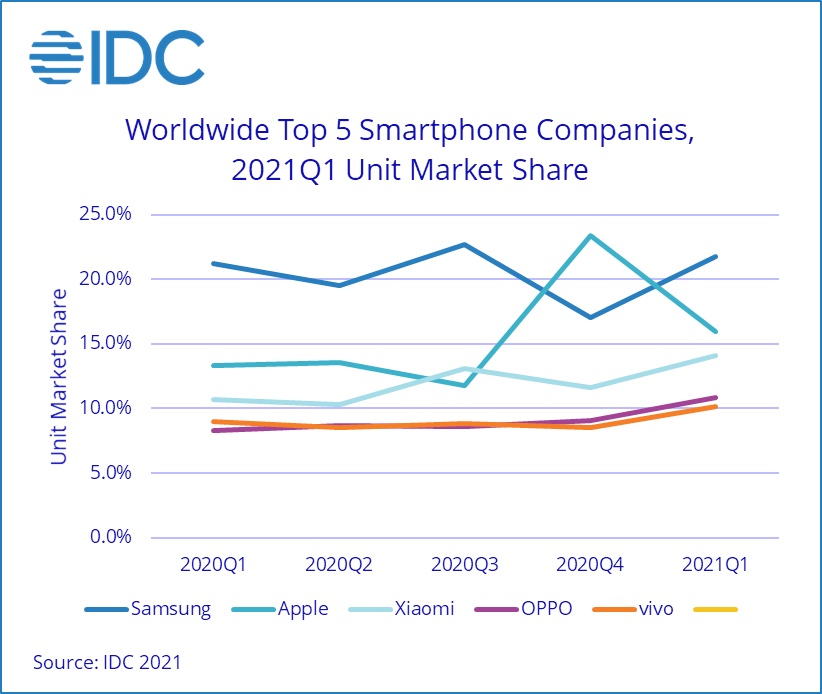 The European market, with several peculiarities

The European smartphone market participates in the global dynamics of the world market, especially in the recovery of sales and, to a lesser extent, in the growth of 5G units shipped. IDC estimates that a record 93 million units were sold in the whole of EMEA (Europe, Middle East and Africa) during the first quarter, 20.9% more than in the first quarter of the previous year, and, with a turnover of $ 31.6 billion, 29% more. In Europe alone, the increase in the turnover of smartphones in the first quarter was a third, with 23.2 billion dollars. It should be noted that these comparisons are made with the worst quarter in history due to the peak of the pandemic.

The figures for the European smartphone market, referred to units, show a somewhat different picture in the case of the consultancy Counterpoint, a sign that the market is so complex that it can be analyzed from different points of view that are not totally coincident. 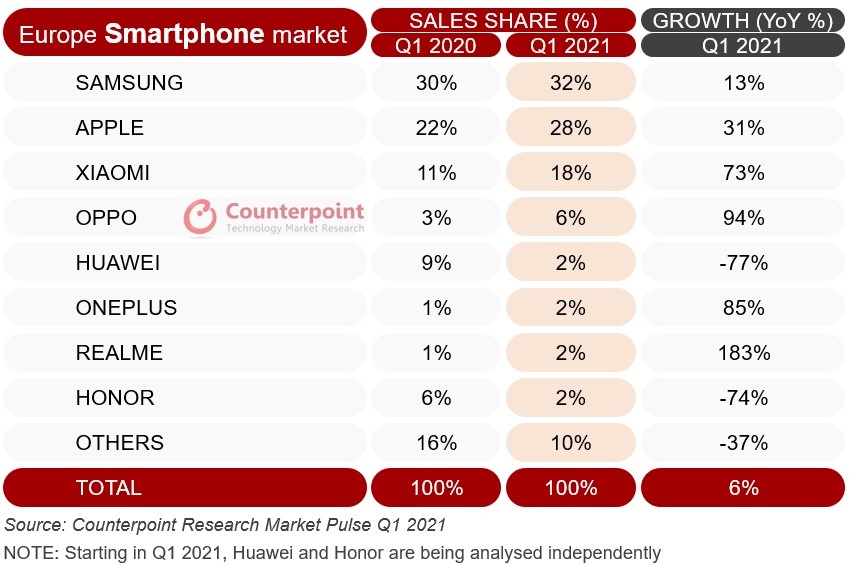 In Europe, Samsung’s leadership in units stands out, with a 32% share, two points more than in the same first quarter of the previous year, followed by Apple, with a 28% share and a strong increase. The most spectacular growths are, as in China, those of Chinese manufacturers, such as Xiaomi, Oppo, OnePlus and Realme (Vivo, from the Oppo group, has not yet penetrated Europe), at the expense of Huawei and its former second brand, Honor.

This growth of Chinese smartphone manufacturers is even more spectacular in the case of Spain and Italy. As the graph below from Counterpoint points out, last March Xiaomi surpassed Samsung in sales, after being slightly below, and both monopolize more than 60% of smartphone sales. This increase of Xiaomi has been almost parallel to the decline of Apple in the month of March, which has happened to have less than 15% of share. In Italy, Samsung is close to 40% share, while Apple and Xiaomi barely sell the same as Samsung between the two.

The smartphone market, as can be seen from these analyzes by the main consulting firms, is extremely close to both the 5G and 4G models. As said at the beginning, there will be a sharper picture of what can happen in 2021 with the data for the second quarter, but the dynamics, global and by region, are very devilish and there may be a major turnaround in the next six months, especially from the big Chinese manufacturers, now that Huawei is in its lowest hours.