International collaboration to define and apply a global standard for fully secure 5G networks is key to the advancement of 5G technology globally, said Liu Liehong, vice minister of the Chinese Ministry of Industry and Information Technology (MITI) during the inauguration of the MWC Shanghai, which started last Tuesday and will last until today. Mats Granryd, for his part, urged the entire telecommunications industry to collaborate more closely to maintain an interoperable, comprehensive and secure global ecosystem and to make the telecommunications infrastructure the backbone of the global recovery, in his capacity as CEO of the GSMA, the association that brings together the majority of telecommunications operators and organizer of the MWC in Shanghai, which this year has exchanged its dates with the traditional February call in Barcelona, ​​which is expected to start on June 29.

China now has more than 718,000 5G base stations deployed, representing about 70 percent of all installed in the world, Liu said. This year, at least 600,000 more 5G base stations are expected to be installed throughout China, thus accelerating the deployment of the next-generation mobile network in the country’s major cities. The accumulated investment for the construction of this 5G network exceeds 260,000 million yuan (40,200 million dollars), which will serve to promote the adoption of numerous applications of this very high-speed mobile technology, said the Chinese president.

China currently has more than 200,000 5G subscribers, which have coverage in all cities at the municipal level of the country, according to the Chinese vice minister of MITI. Liu also emphasized the need for international cooperation and collaboration “so that we can complement, promote and improve the level of global development of 5G.” He assured that the country is willing to “develop a 5G cybersecurity standard” that allows interoperability and mutual recognition of the telecommunications technologies used and serves to build a bridge for collaboration.

The initiative to create a global data security regulation proposed by the Vice Minister at the inauguration of MWC Shanghai refers to the one launched last year by the Chinese Government and is an apparent response to the efforts of the United States, under the mandate of the Donald Trump Administration, to restrict the use of Huawei telecommunications equipment due to its alleged lack of security, an end that Huawei has always denied. For now, Joe Biden has not explicitly positioned himself to continue vetoing Huawei and ask the rest of the world to do the same, as did his predecessor.

Mats Granryd, CEO of the GSMA, urged the entire mobile phone industry to focus on business ethics and profitability and to dispel the threat of a technology split and the crisis of confidence in data security. He highlighted the immense challenges that there have been in 2020 on a global scale but insisted on the leading role of the mobile industry in facing the pandemic, with the provision of a highly resilient infrastructure.

This year 2021 has already started better, with much greater optimism in consumption. But Granryd stressed that because mobile connectivity plays a central role in people’s lives and the mobile industry has become one of the most powerful public platforms in the world, this new role forces it to be much more responsible now. cope with the many challenges you face. It is necessary, he stressed, for the mobile industry to use its business relationships to move forward together.

The three big Chinese national operators were very willing to cooperate with each other, both in the development of infrastructure and network sharing and in new industrial applications with other partners.

The CEO of the GSMA also took advantage of his intervention to point out that leaders have a great responsibility for their businesses to act in an ethical way, apart from being profitable. As the mobile phone markets mature, he said, the number of subscribers and smartphones begins to saturate and the margins of operators shrink, while their investment needs increase. And the internet giants are reaping the rewards of this situation in terms of market capitalization.

China Mobile, China Unicom and China Telecom, the three major Chinese mobile phone operators, agreed to highlight their role as transformers and accelerators of the entire industry and on the need to work together to increase the demand for digital services. China Mobile President Yang Jie argued that all industry representatives need to open their arms to promote digitization and intelligent transformation of society.

Wang Xiaochu, president of China Unicom, said that innovation in 5G, Big Data, cloud, artificial intelligence and IoT must be fostered, but in a planned way and sharing key resources, such as infrastructure and research and development, to contribute to a growth of the economy and quality employment. Ke Rulwen, Chairman of China Telecom, also advocated for greater collaboration with partners to jointly expand the information services market, accelerate technology developments, and improve network and supply chain security. “Due to the high construction and operating costs of 5G infrastructure, network sharing is essential,” Ke justified.

Nokia CEO Pekka Lundmark stressed in his remote speech that mission-critical applications will represent a complete change for 5G in the industrial sector and will enable higher economic growth, improved productivity and sustainability. . “As the 5G development cycle progresses, we will see a radical transformation across industries and utilities,” he predicted. Critical networks, in his view, will be the key to all future development of 5G.

Ericsson CEO Börje Ekholm reiterated the need for continued open competition among equipment suppliers and praised the progress China is making in developing an advanced 5G network. “Thanks to free competition and collaboration is how the telecommunications industry has grown, to be one of the largest in the world” and, conversely, “everything that restricts competition has the risk of slowing down our industry,” he added. . And he recalled that Ericsson has done business with China since 1894 and “time has shown that we are a partner that can be trusted.”

Xu Ziyang, president of ZTE, the largest Chinese manufacturer of telecom network equipment after Huawei, argued that 5G development is still incomplete and that many improvements need to be made, especially in higher spectrum efficiency and consumption. of energy from mobile phone networks. For Xu, the rollout of 5G is still in its infancy and many business development and technology improvements need to be made.

In his opinion, many of the industrial applications need to be improved and also security issues reviewed, as well as exploring many new business models on which 5G will be based. Massive MIMO technology needs to be used much more to make better use of spectrum and also employ cloud-based technologies to minimize interference between different frequency bands. Greater network intelligence and convergence of different networks, as well as increased use of the cloud, will be vital to achieving greater overall efficiency of 5G networks, he said.

Ken Hu, current president of Huawei, who is appointed on a rotating basis, emphasized the infrastructure deficiencies that the pandemic has highlighted around the world and that the lack of some services can widen digital inequality. He mentioned that the distribution of telecommunications traffic has changed radically with the pandemic and cited that now there is no clear distinction between high and low levels of occupation, as before, nor between urban areas and small population centers or between the Interior and exterior. One of the problems we face, he noted, is that the distance between countries that are slow to roll out 5G technology and those that are faster to deploy is increasing.

Networks should be more balanced and distributed

All this, predicted the rotating president of Huawei, will require a more balanced coverage of the networks and the distribution of radio stations. The pandemic, clearly, has accelerated the digitization process, with more consumers using the Internet and more companies making greater use of digital technologies. Innovation, he warned, is not only about solving today’s problems, it is tomorrow’s. When the pandemic is under control, we will have to think about how we can innovate to improve the quality of life, make business smarter and create a more inclusive world, he insisted.

Huawei, Hu noted, is making great efforts to develop industrial 5G applications in a large number of fields with the help of numerous partners. The company has signed more than 1,000 5G corporate contracts, covering more than twenty industrial sectors, such as manufacturing, healthcare, finance, transport or mining. “We are incubating multiple industrial 5G applications with the help of partners to make up for lower smartphone sales.”

It is clear that Huawei has built much of the already very extensive Chinese 5G network, along with subsidiary operations, and is also getting many orders in other Asian countries, as well as in Africa and other countries around the world. The company made no mention of its situation in Europe, nor did its president want to mention last year’s results, which will be made public at the end of March. For the company, 2020 has not been an easy year due to the pandemic and “facing some extraordinary difficulties”, although Hu assured that it has also been a year of learning and that it has brought many possibilities for the future.

China is currently leading the global deployment of 5G technology, with 202 million connections, which are expected to reach 822 million by 2025, according to the Mobile Economy China report prepared by the GSMA for MWC Shanghai. 12% of Chinese consumers are connected to a 5G network and by 2025 it is expected to be just under half, 47%, according to the report, as seen in the graphic below. 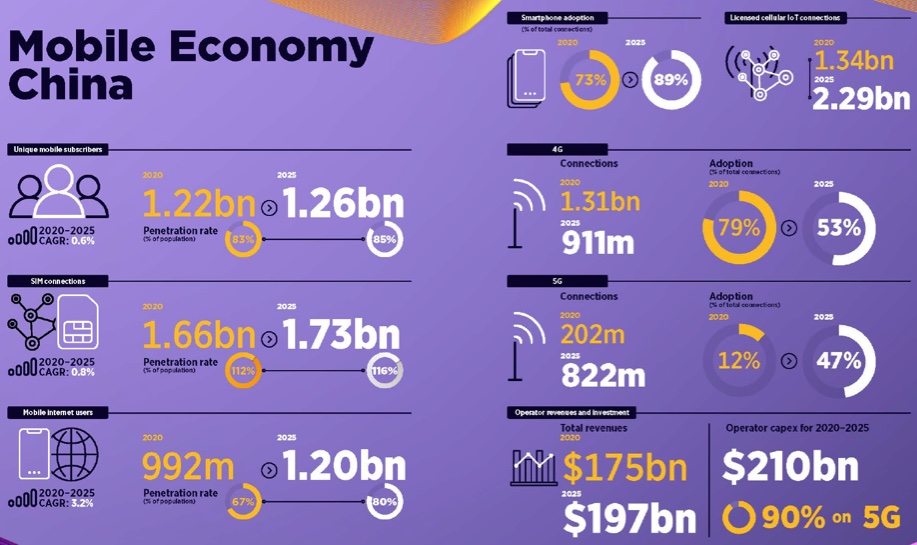 China now has 1.22 billion unique mobile phone subscribers, representing 83% penetration. This figure is very close to saturation and is expected to grow very little in the coming years. It is estimated that there will be 1.26 billion mobile unique subscribers in 2025, with 85% penetration. However, there will be a considerable increase in mobile Internet users, because the GSMA report estimates that it will go from the current 992 million to 1.2 billion in 2025, with 80% penetration compared to the total population.

China is one of the countries that has bet the most on the rapid deployment of 5G technology, along with South Korea, and its high population makes the figures colossal. At present, China has 1.310 million connections to the 4G network, 79% of the population. In the coming years, these 4G numbers will drop significantly in benefit of 5G. Thus, by 2025 there are expected to be 911 million 4G connections compared to the 822 million 5G mentioned above. The penetration of 4G and 5G will also level off: in 2025, 53% of the Chinese population will have 4G in 2025 compared to 47% 5G.