Both China and South Korea consider that 5G networks will be the great dynamizer of their digital economy and, therefore, of their economy as a whole throughout this decade. For this reason, both countries are making strong investments to cover, in a broad and accelerated way, their territories with 5G networks and develop business platforms that allow the innovation of their companies, as highlighted by several representatives of operators and equipment manufacturers at the MWC. The main challenge, they also warned, is to develop 5G applications that arouse greater enthusiasm among companies and consumers.

The large investment in 5G networks that operators in China and South Korea have already made in the last two years, and will continue to make at least until 2025, contrasts with the relative apathy of European and United States companies, which are waiting for patients. to introduce 5G business applications until the infrastructure is fully developed and deployed. Meanwhile, operators, especially Europeans, do not see enough interest from business users and consumers to justify the high investment required to quickly have a powerful 5G network, leading to a difficult situation to unlock.

In last week’s MWC it was possible to observe the different appreciation that exists in Asia and in the West of the deployment and use of 5G networks, at least in the next two years. While there were a large number of presentations and conferences by top Asian managers of telecommunications equipment manufacturers and operators who showed a keen interest in accelerating the deployment of 5G networks and applications (mostly in videoconferencing), representatives of Western companies In general, they showed much less enthusiasm for the immediate future of 5G and with much more commercial content in their presentations and without special commitments.

For the development of 5G services in companies to be attractive, the technology must be fully activated and differential technologies developed that encourage their use, assures the operator KT

Shin Soo-Jung, head of the companies part of the Korean operator KT, recalled that the operator had already shown the possibilities of 5G at the Pyeongchnag Winter Olympics in February 2018 and that in April 2019 it had launched the first commercial 5G network and first private 5G network for business use. In September 2019, KT deployed an Edge Cloud service to large parts of South Korea and now has 150 real-world all-business (B2B) use cases.

One of these use cases is “the establishment of a private 5G network for government agencies, which allows access to the internal network, outside the workplace, via 5G”. With this internal 5G network you have remote access in a very safe and practical way to state applications. The commitment is to expand the public and private sector with 5G networks and have a national 5G network fully deployed for central authorities and 17 local governments by 2025.

Challenges to the development of business 5G

Shin Soo-Jung made no secret that expanding the 5G B2B business, for which he is responsible, poses numerous challenges. He argued that the lack of sufficient enterprise use cases and the relatively slow development of suitable devices and applications makes it difficult to adopt 5G services in the enterprise market. For the development of 5G services in companies to be attractive, “the technology must be fully activated”. In his company, they are developing differential technologies so that customers can use the added value that 5G provides, such as network slicing, which separates the traffic for each application.

One of the problems, he added, is that the value for the customer is not well articulated and clarified, which fully justifies the adoption of 5G technology. According to Shin Soo-Jung, many companies view 5G simply as a network, rather than a platform with applications, business partners, and service support. The lack of a differentiated technology, a rapid deployment of equipment and services and a premature level of synergy between 5G and the cloud, artificial intelligence and Big Data are the main challenges for the expansion of 5G among companies, as seen in the graph below. 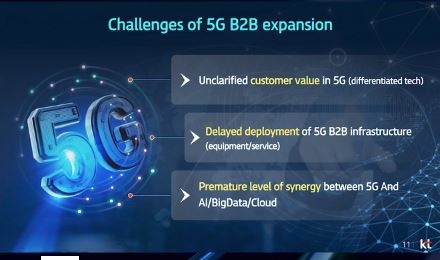 Xu Ziyang, CEO of ZTE, the main Chinese network equipment manufacturer after Huawei, was more optimistic than KT and highlighted, also in a presentation held within the framework of the MWC, the “massive impact of 5G deployments that is having in industrial verticals ”, which allow increasing efficiency, lowering costs and reducing energy consumption in smart factories.

Xu gave as an example the factory that ZTE has in Nanjing, China, which is capable of producing five base stations every minute after having developed multiple 5G-based applications, such as 8K computer vision, digital twins, real-time inspection and intelligent storage. cloud-based. The improvement in the efficiency of the factory has made it possible to reduce the workforce by up to 40% and lower the defect rate by 20%, he said.

Apart from this internal development, Xu said that ZTE is working with 90 operators and more than 500 industrial partners to explore different use cases in 15 industry verticals in general. Smart factories represent, in his opinion, a great leap forward compared to traditional production, with lower costs, improved efficiency and an increase in the quality of the final product. In addition, a lower carbon footprint and more effective product transport is achieved.

Xu acknowledged that 5G industrial applications are still in an incipient phase, despite which their future development is clearly identified, with immersive artificial recognition technologies as the main example. In any case, it is necessary for industrial leaders to work together to develop the 5G ecosystem and new business models, opening up to new business segments.

Continuous innovation in equipment and network solutions is essential and will shape the future of the industry; They will need to be much more energy efficient to meet climate change targets, says Huawei

Chen Lan, president and CEO of Japan’s DoCoMo labs in Beijing, said the expansion of 5G is accelerating rapidly in China. Coverage reached 574 cities last March and in March next year it will rise to 55%, to reach nearly 70% a year later and 80% in March 2024. 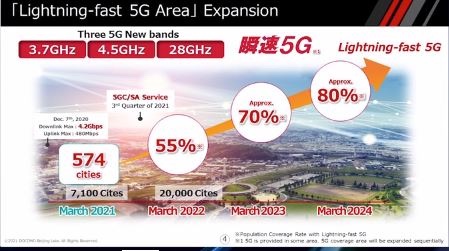 Of the 250 use cases and 5G solutions launched since March 2020, video transmission has accounted for 35% of the total and augmented reality another 28% for the head of DoCoMo Beijing Labs. Remote control and mobility other 12%, robotics another 8% and then artificial intelligence 4%, among the applications that have used the advantages of 5G the most.

Accelerate the deployment of 5G networks

Ryan Ding, Head of Networks at Huawei, said that innovation in information technology is becoming a key driver of the global economy and its value is reaching beyond the telecommunications industry. Continuous innovation in 5G will bring more value to operators, the information technology industry and the global economy, he said, in one of the most extensive and outstanding presentations of the MWC.

5G, assured the Huawei executive, is changing the role of operators. Telecommunications operators are driving national economies, through the digital economy and the infrastructure of telecommunications and information networks. “Currently, the main objective of operators in 5G is to achieve business success in three key markets (consumers, households and industries) through innovation in network deployment, market development and optimization of operations. “.

In the consumer market, he added, 5G not only means faster speeds but also brings new experiences and greater value to consumers. 5G redefines traditional services, with messaging that is richer in images or with interactive videos, as well as the free dissemination of videos of high educational and cultural value and the use of augmented reality in navigation, education or electronic shopping services.

To succeed in the home-based 5G market, Ding’s first recommendation to operators was to accelerate 5G rollout, with targeted investment and network planning, based on precise knowledge of high-value areas, key scenarios and potential users. The second accelerate the migration of users towards 5G and the third create flexible pricing models of segmented and value-added content services. Access to fixed networks through mobile phones (FWA) in areas with little fiber lines is a good option for households to have broadband at high speed.

The key to the success of operators in the business market, in the opinion of the Huawei executive, is to first target the right industries, with feasible solutions that allow replicating successful models. The key factors in selecting the right industries, which vary by country and region, are the level of demand, technological feasibility, availability, and the ability to replicate models.

The offer of the operators has to be defined based on three models: system integration, 5G supported in the cloud or network segmentation, as seen in the graph above. The business models, added the manager, can be basic, with a traditional connection offer; advanced, with value-added services; or flexible, the combination of the two above.

Innovation in 5G must be boosted

In any case, “continuous innovation in equipment and network solutions is essential and is what will shape the future of our industry,” said the manager. And he gave as an example Huawei’s lightest 5G antenna in the industry, at 19 kilograms, which allows faster, easier multiband deployment without the need for rooftop cranes. Also the optical connection, with a higher level of integration in a smaller space and, as a third example, the first supplementary link at a commercial level, which allowed a live connection in 8K and virtual reality, at 450 megabits per second, used in the Xiamen marathon.

This necessary continued innovation will also support carbon neutrality and meet climate change reduction targets. At the equipment level, he pointed out, they need to be manufactured in a way that is more efficient and uses less energy. As for the base stations, the objective is that they consume 30% less energy and with respect to the networks, it is also that they consume 30% less energy. The goal, he concluded, is that one plus one is less than one, thanks to multiband and multi-RAT networks, with multiple layers in a single network.

It was clear at the MWC that Asian countries, and especially China and South Korea, have made the development and accelerated implementation of 5G networks an absolute priority to boost their economies, which are far behind Western countries. China is expected to have about half of the world’s 5G connections by 2025, as the GSMA report says.