5G technology has great potential to cause a strong increase in the productive economy and the competitiveness of companies throughout this decade, as well as sustainable environmental development, according to a broad cross-sectional study promoted by Nokia. The industries that are more involved in the development and implementation of 5G, and the sooner they do so, will have a greater increase in productivity compared to their competitors, which will translate into substantial benefits for themselves and for society in general. But “the result of this revolution that 5G promotes will not be determined by technology, but by the actions that people take,” warns Pekka Lundmark, the recent president and CEO of Nokia.

Industries that enable 5G technology have the potential to contribute eight trillion dollars to the GDP of the global economy through 2030, according to a report based on a survey on the degree of adoption of 5G among companies around the world. The report, freely available on the Internet in an interactive way, has been commissioned by Nokia to provide a cross-sectional view of the deployment that 5G technology will take place throughout this decade.

The economic advantages for the immediate use of 5G are clear. The result of the report, says the CEO of Nokia, is that the businesses that go the furthest in the deployment of 5G will also obtain the largest increases in productivity. And the employees of these pioneering 5G companies will be three times more confident than others that their organization will cope with the disruption caused by Covid-19. The implications of 5G go beyond its economic and environmental benefits, because “it has the potential to help lift global economies by promoting high productivity growth in a sustainable way,” Lundmark emphasizes.

The data provided by the report reveals that, on average, companies understand the importance of adopting 5G, although there is a significant investment gap due to multiple barriers

5G will transform entire industries thanks to the widespread spread of digitization and automation. Companies that get down to work first will have a competitive advantage and the ability to make their businesses more resilient and better equipped to deal with another global crisis. Through fast, secure and low-latency connectivity, supported by artificial intelligence and Edge Computing, new opportunities will be unlocked for businesses to optimize their operations. “5G will dramatically reduce the energy required to transfer many bits of data, cut energy waste and conserve natural resources,” adds Lundmark in the final part of the report.

This result will not, however, be automatic and predetermined by technology, but will depend on the actions that companies take. “If we want to drive a global economic recovery, solve serious problems like climate change, and ensure that each of us has access to critical connectivity in this new era, then now is the time to harness the full potential of 5G and shape to this technological revolution for the good of all ”, synthesizes at the end the CEO of Nokia.

It’s no surprise that the adoption of 5G will fuel business success, acknowledges Raghav Sahgal, president of Nokia Enterprise. When companies connect their private wireless networks with their manufacturing operations, they will benefit from faster, more reliable and more efficient network services. “5G will be the catalyst for businesses to modernize their systems, better understand their customers and introduce a new generation of products and services better adapted to their needs and with cutting-edge technology,” he says.

5G is not the communications infrastructure of the future, it is already here, says Daniel Burrus, a global technology futurist. Businesses that want to harness its potential should start using it now. 5G technology will also force companies that have waited to see what happens to react in a hurry and, predictably, they will lose market share as a result. Business leaders should ask themselves whether they want to be followers or disruptive, says Burrus.

Gabriela Styf Sjöman, Nokia’s director of strategy, argues “that companies that want to take advantage of the opportunities offered by 5G should not waste any more time and accelerate innovation in their business model to remain competitive.” The recipe, however, is not at all easy to put into practice because, as Styf adds, “beyond investing in 5G technology, this transformation will require digitizing operations, processes and ways of working to take advantage of all the potential offered by 5G ”.

Although the study authors maintain that the benefits of 5G are proven, the empirical data that reveals the responses of those interviewed by the consultancy Sapio, at the behest of Nokia, suggests that companies are well aware that 5G offers them a great opportunity to be more competitive in the future and gain more market share and money in the coming years, but they do not see anything clear how to do it and they run into immense difficulties to implement 5G in their organizations.

The consulting firm has interviewed 1,628 technology purchasing decision makers in eight highly developed markets, around 200 in each of them, and six industrial sectors. The countries are Germany, Saudi Arabia, Australia, South Korea, the United States, Finland, Japan, and the United Kingdom. The sectors, in order of importance, are manufacturing, health, public sector, energy, mining, and transportation. Detailed results can be viewed in a set of 145 slides, global and by country.

The main investments in information technology in this decade will be carried out by physical industries, and not digital ones as before, and will be directly related to the development of 5G infrastructure

Although many organizations are in the implementation phase of 5G technology, for most it still means that tests, pilots or deployments are made in the initial phase, such as 5G smartphones or limited 5G connectivity services in fleets or rural areas, ensures the report. “Very few have realized the true scope, depth and potential that 5G represents,” they acknowledge.

And it is that the data is quite stubborn and shows a rather disheartening reality, because it reveals that it is very difficult for 5G to be implemented on a large scale in the short term. What is expected is that a few companies will act decisively within a very short time, as they are already doing, which will be followed by many more in the middle of this decade, but the bulk of the industries will not have it implemented, hopefully, until the end of this decade.

The figures reveal that, on average, the importance of adopting 5G is well understood, “although there is a significant investment gap.” 86% of decision makers say they have some kind of strategy for 5G and about a third fear that they will be displaced by competitors, although they will not invest in 5G for the next three years. Only 15% are investing in its startup and between a third and a quarter of businesses, specifically 29%, do not plan to make any investment in 5G in the next five years.

At a global level, the result of the 5G Business Readiness survey, carried out by Nokia to elucidate the degree of commitment of companies to 5G, reveals that half of companies are in the initial phase, between the initiation, planning and test, and only 7% can be classified as mature. But there are very significant variations by country, some of them quite surprising. 13% of organizations in Saudi Arabia and 12% in the United States can be classified as mature but less than 5% in the rest of the countries. At the bottom, in addition, are Germany, with 3%, Finland with 2% and the United Kingdom with 4%. And that which has only been asked of companies from highly industrialized countries.

Correlation between deployment and 5G results

All in all, the report makes clear that there is a clear correlation “between the deployment of 5G and its results at the business level.” Companies that are at an advanced level of 5G adoption are the only group that has experienced a net increase in productivity of 10% since the appearance of Covid-19, and the only group that has been able to maintain empathy with your customers during the pandemic.

The most mature 5G companies have grown considerably faster than the rest. The results show that 49% of the companies that are in the expansion phase and 37% in the implementation phase, which represent the two most advanced stages of mature 5G, have achieved rapid growth last year. In contrast, 20% of companies are in the planning phase, 11% are in discovery tasks and 5% are in passive mode. “These results show that the most mature companies at the 5G level, and therefore more advanced in the global digital transformation, have the greatest impact on the performance of their business,” the report highlights.

Despite the economic challenges posed by the pandemic, according to the report, 72% of large companies are expected to invest in 5G over the next five years. A strong take-off in investment is expected in the next three years among the companies most likely to digitize. A third of companies do not expect to make any investment in 5G in the next three years, despite the fear that they will be overtaken by their competitors.

The graph below shows that investments in information and communications technology (ICT, ICT in graph) will grow significantly as this decade progresses, according to analysis conducted for this report by Nokia consultancy Bell Labs Consulting Analysis. Annual investments in ICT will rise from $ 2.8 trillion this year to $ 6 trillion in 2030. The bulk of this increased investment in ICT will be carried out by 5G technologies and their associated applications and services.

In the last two years, the graph shows, investments in ICT have been stagnant, and 5G obviously null, because they did not yet exist, but as of this year there will be a takeoff in investments that the report calls 5G +, until it is 4.5 trillion dollars in 2030, 75% of total ICT investments. The report qualifies 5G + as the new investments that companies will make to modernize their industrial operations and their manufacturing technology infrastructure, aimed at rekindling latent demands and reviving a new phase of growth in physical industries. 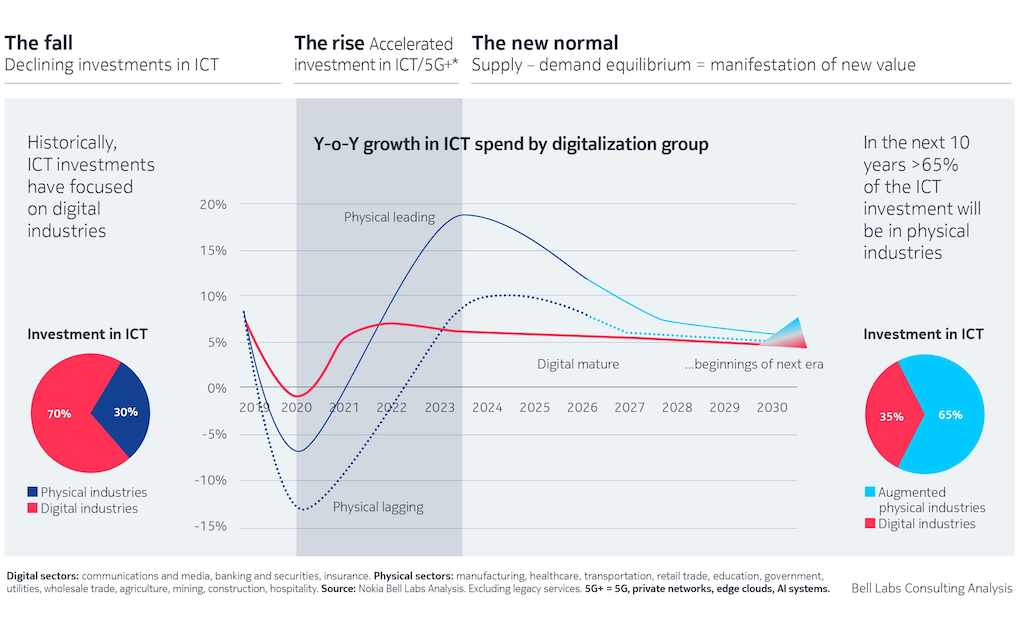 The forecast of the Nokia report is that investments in information and communication technologies will fall this year, as is happening and very sharply in physical industries, but in the next three years there will be a significant rebound and growth will be positive to starting in 2022 in all types of industries, physical and digital, with a sustained annual growth of 5% at the end of this decade.

In order for the investment outlook for this decade predicted by the report to take place, significant existing barriers will have to be overcome. The report identifies five main barriers to a 5G adoption: the limited availability of key infrastructures outside of urban centers and the limited awareness of what 5G means by decision-makers which, in turn, does that they do not consider it a priority and nothing is done. The other two barriers are the cost and complexity of implementing 5G and, finally, the generic concern for the security of 5G.

To help overcome these barriers and improve understanding, trust and ultimately adoption of 5G, the report proposes that regulation be improved, with the approval of state subsidies to make operators’ investments in 5G infrastructure are more profitable, for example by reducing the cost of licenses. And that there is more information and dissemination of the potential benefits that 5G brings and, above all, collaboration between companies is stimulated to promote, in turn, investment in the use of 5G and the exchange of experiences.