5G mobile phone access networks (RANs) will be much more flexible and open to multiple providers in the coming years, allowing operators to deploy their networks more quickly, with capacity and use cases more adjustable to the needs of their customers and without depending on a few equipment manufacturers as before. Qualcomm has just offered its vision for the future of RANs, just as Samsung, NEC and the members of Open RAN have made theirs in recent weeks. It is already taken for granted that 5G networks will be fully interoperable, disaggregated and virtualized, three totally disruptive concepts, but it is not expected that these solutions will begin to be functional until well into 2023. It is also not clear that the market provides for so many providers.

Telecom equipment providers have always tended to sell the bear’s skin before hunting it, but with 5G the situation is nearing paroxysm. Just when the 5G networks begin to work with the support of the 4G trunks, which is called Non Stand Alone mode (NSA) and the deployment of some totally 5G networks has just started, or in Stand Alone mode (SA 5G), always With fully closed and proprietary teams, it seems that all this is resolved and a new phase is announced: installing networks with the process of centralized and also virtualized baseband; that is, remotely managed. And, last but not least, in a disaggregated way, with standard components and with interchangeable manufacturers.

This full flexibility of 5G networks can almost certainly be achieved, due to continuous advances in software and the development of more standardized and interoperable hardware platforms. These developments will also be absolutely essential so that network management can be done in an automated way, with hardly any human intervention. The increasing complexity of 5G networks, due to the greater capacities demanded, also requires that there are management and supervision systems for networks that are much more automatically controllable.

Qualcomm will offer from 2023 a catalog of Open RAN chips, with its own designs but manufactured by others, and that will favor the development of open systems

Firm steps are being taken in this direction towards more evolved 5G networks, which ensure operators better coordination, more scalable capacity, faster deployments, lower latency and new use cases, as summarized in the following Qualcomm graph . It is not foreseeable, however, that the vision exemplified by the acronym MEC, Multi-access Edge Computing, as a supernode at the entrance of the backbone network, will be reached until the second half of this decade. 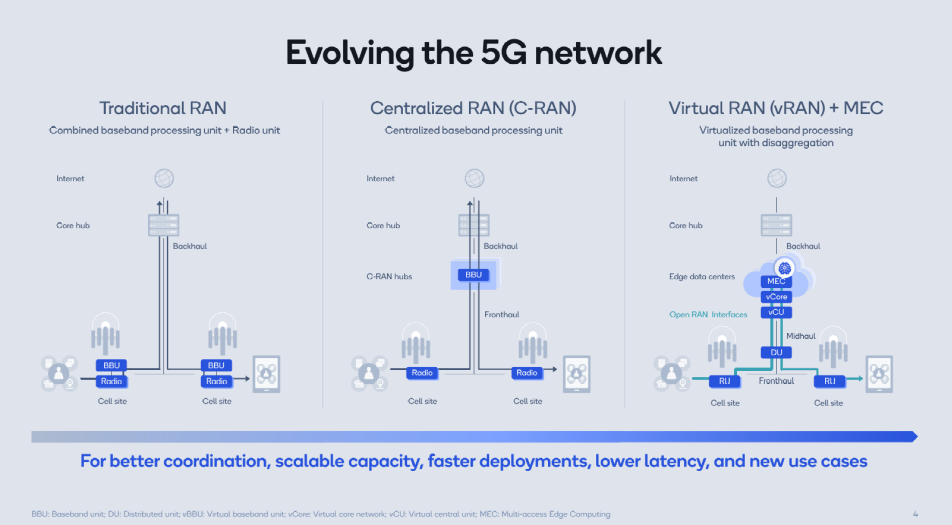 Cristiano Amon, president of Qualcomm, announced last Tuesday that his company wanted to enter a new business area, the sale of chips for all mobile radiotelephone macrocells, during its annual meeting for suppliers and analysts to publicize its developments and future strategy. On this occasion, for obvious reasons, the Qualcomm 5G Summit had to be done virtually and it is likely that the traditional mid-December meeting in Hawaii, much more focused on the new products of the following year, will also be virtual.

This product catalog will include the radio and baseband access unit, the distributed unit and the distributed radio unit, mainly focused on open and virtualized networks, the company says. However, these new chips can be used both in standardized equipment and in equipment that meets the Open RAN specifications of the O-RAN Alliance. Amon added that “we are working closely with mobile operators, network equipment manufacturers, standardization bodies and other key members of the telecommunications industry to make the deployments of these networks a reality,” as stated in its statement.

Compete with other chipmakers

The announcement assumes that Qualcomm will compete directly with other macrocell chip manufacturers, such as Marvell, Broadcom, Intel and Xilinx, which they sell to large equipment manufacturers such as Ericsson or Nokia. Qualcomm has ensured that it is not its intention to manufacture these chips, among other things because it has never done so, but only designs them. It is known that the main manufacturers of its most advanced chips are the Taiwanese TSMC and, lately, Samsung. Companies that, in turn, also manufacture chips for other companies (and that now cannot do it for Huawei).

Qualcomm also announced that it is working directly with Reliance Jio of India, and its affiliate that makes Radisys equipment, to develop these 5G RAN platforms. And it is backed by an extensive list of operators, such as Verizon, Vodafone, Rakuten, AT&T, BT, DT, KDDI, KT, LG UPlus, NTT DoCoMo, SK Telecom, SoftBank, TIM and Telefónica, who all praise the initiative of Qualcomm in the statement. Samsung also intervened in the virtual summit, although it declined to commit to using these chips in its computers. You will probably manufacture them together with other companies, such as those mentioned.

These Qualcomm products, however, will not be available in the short term. According to Gerardo Giaretta, director of development of these products, the first engineering samples are expected to be available during the first half of 2022 and the first commercial equipment in late 2022 or early 2023, which will then be integrated into the equipment from manufacturers of their choice.

Ericsson predicts that from 2023 the Open RAN products will begin to impact the RAN market, but by then they will have their own open and highly competitive products

These new chips will be based on the FSM100xx 5G RAN chipset introduced by Qualcomm in 2019 and will provide, according to Giaretta, “very high performance”, apart from reducing the total cost of ownership thanks to its greater energy efficiency. These chips will make it possible to virtualize networks, their capabilities and the use of open interfaces, as well as having an integrated radio frequency modem design, compatibility with networks of less than 6 GHz and millimeter wave networks.

For analysts and experts, this announcement by Qualcomm will favor the development of Open RAN, which promises the development of products that come from several suppliers and not just one, as other manufacturers of radio communications equipment, such as NEC, are doing lately. Samsung, to some extent Nokia and several companies such as Mavenir, Alliostar or Parallel Wireless, among others.

Open RAN will impact from 2023

Börje Ekholm, CEO of Ericsson, acknowledged two weeks ago, when presenting his company’s quarterly results, that the Open RAN movement will impact the turnover and business models of the main equipment manufacturers starting in 2023, but that his company it will be very well positioned when this market shift takes place. “It is important to remember, Ekholm added, that Ericsson has been a key partner since joining the O-RAN Alliance (the organization that develops the Open-RAN specifications) in February 2019 and will continue to do so.”

Ekholm was convinced that Open RAN is something that will clearly happen. For this reason, he added, his company works to ensure that it is well positioned in the market when it occurs and, also, is preparing for when the billing of the software is more important. “I really don’t see Open RAN having a significant impact between 2021 and 2022, although from 2023 it will start to impact our billing and the way the business models (of 5G RAN macro cells) will evolve. It also represents, for Ekholm, a very good opportunity to position the company in the face of this technological change, as has already happened many times in this industry.

A topic that is being highly debated is the real importance that the Open RAN market will have in this first half of the decade. The total cumulative Open RAN market between 2020 and 2024 is estimated at $ 6.5 billion, compared to a cumulative total for the RAN market of almost $ 170 billion in the same period, according to estimates by the consultancy Dell’Oro, which can be considered even as optimistic because the company Mavenir, an Open RAN software developer, includes them in the analysis of the potential market in its official report of October 21 for the issuance of shares.

The Open RAN market will have an approximate size of 200 million dollars this year, to grow gradually in the coming years, until reaching 3,000 million dollars in 2024. For Mavenir, Open RAN is impacting the broad RAN market, which is expected to be of $ 201 billion between 2019 and 2024, according to Dell’Oro estimates in the Mavenir report.

Starting in the middle of this decade, the Open RAN market will continue to grow exponentially, on an increasingly high basis. Consulting firm ABI Research, in a recent note, points to a turnover for Open RAN product hardware, software and services of $ 32.3 billion in 2026, with a total RAN market share of 45%. The consulting firm Rethink goes even further and predicts that by 2026 the Open RAN share with respect to the total RAN could be 58%.

It is generally accepted by all that the Open RAN market is now insignificant but that it will grow strongly in the coming years, as will the global access network (RAN) market. According to Stefan Pongratz, principal analyst at Dell’Oro, a consultancy commonly used by Nokia and Ericsson for their forecasting, the RAN market’s turnover ranges from $ 30-35 billion annually. But that in the coming years will grow exponentially. Rethink’s forecast is that in 2026 it will be at least 59% higher than the turnover of 2019 and ABI points to almost three times more growth, of the order of 158% more between 2019 and 2026.

At the same time, it is conceded that the traditional RAN market will decline from the middle of this decade, to the benefit of Open RAN solutions. But this does not mean that traditional providers of (closed) RAN solutions are going to lose market share. Because, as the statements of the CEO of Ericsson suggest, these traditional suppliers, and not only Ericsson, are willing to offer Open RAN products that are highly competitive in price and performance compared to their new competitors. Operators will have a much broader and more competitive offer at their disposal.

But this will be when the Open RAN market is sufficiently reliable and captures a significant part of the total market. For Stefan Pongratz, a respected but considered prudent analyst, “it would be a great achievement if Open RAN captures a double-digit share in the next five years”, that is, more than 10%. After all, Pongratz has written in his reports, the Open RAN market is still very immature and untested, especially on a large scale.