5G networks will benefit all economic sectors throughout this decade, although the bulk of the growth will go, 40%, to services and another 39% to manufacturing, while information technology, retail and utilities will share the remaining 21%, according to a GSMA report presented at the MWC. The combination of information technologies and 5G networks will promote this high economic growth, as is already happening in China and South Korea, although Ryan Ding, head of networks at Huawei, assured that for this to happen it will be necessary to promote more innovation and roll out 5G networks more widely and faster.

Mobile phone technologies and services generated an added economic value of $ 4.35 trillion last year, representing 5.1% of world GDP. This figure will increase by another 480,000 million dollars until 2025, reaching by then 4.83 trillion dollars of global economic contribution, according to the Mobile Economy 2021 report presented last week by the GSMA in the framework of the WMC. 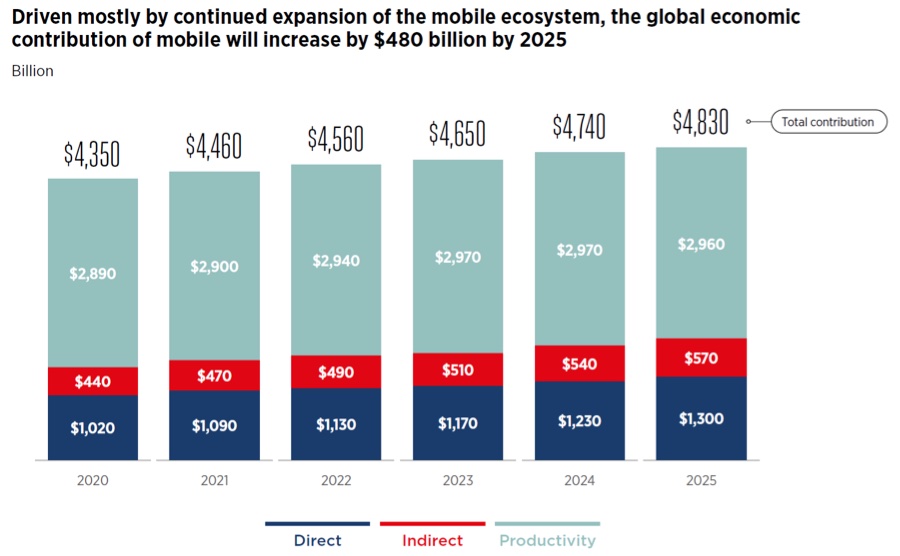 The increase in mobile users in this next five years, together with the improvement in productivity and the efficiency that this will cause, will benefit all economic sectors and countries in the world, the report says. In particular, 5G networks are expected to grow all economic sectors by some $ 700 billion over this entire decade, between 2020 and 2030, although some industries, especially services and manufacturing, will benefit much more. than the rest.

As the graph below breaks down, 5G services, which include government, healthcare and education, will contribute 40% of this global growth of $ 700 billion, while the manufacturing sector will contribute another 39%, that is , 273,000 million dollars. Information and communication technologies (ICT) will do so in 8%; the management of utilities, transportation, construction, mining and agriculture by another 9% and retail by 3% globally in 2030. Growth will be very proportional and constant to the current one, as seen in the graph, although from By 2028 there will be a slowdown, with a less steep incline until the end of the decade. 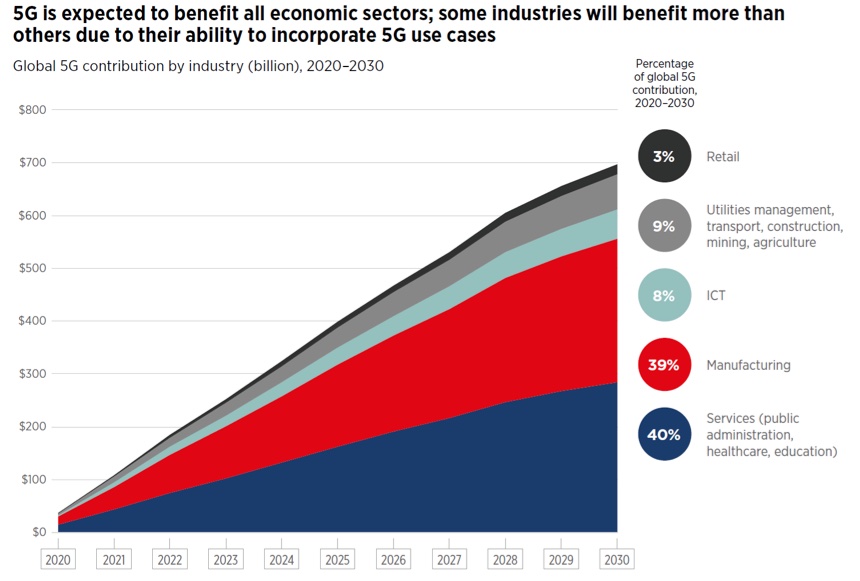 Of the four main use cases to be promoted by 5G, Enhanced Mobile Broadband (eMBB) and Fixed Wireless Access (FWA) will each contribute one-third of the economic benefits associated with 5G over time. throughout this decade, while mobile IoT (MIoT) will do so at 18% and ultra-reliable and low-latency communications (URLCC) will account for the remaining 16%. 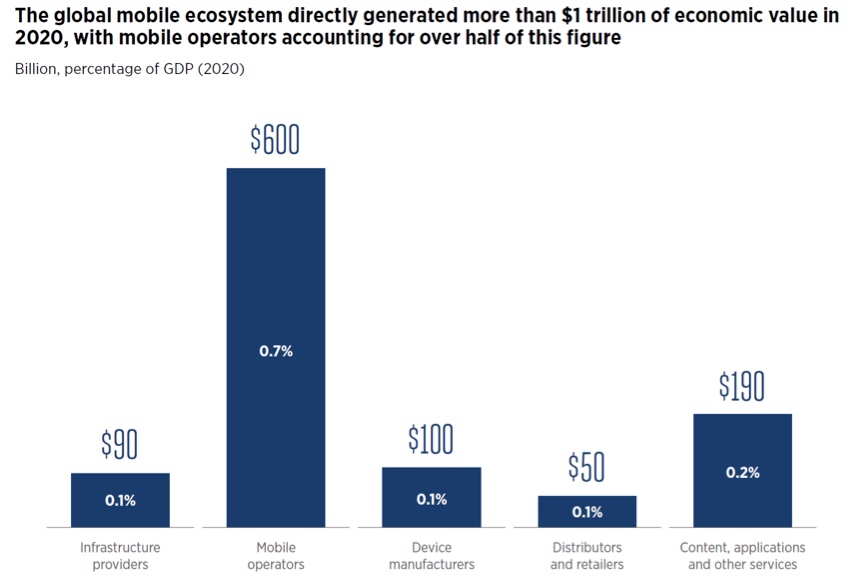 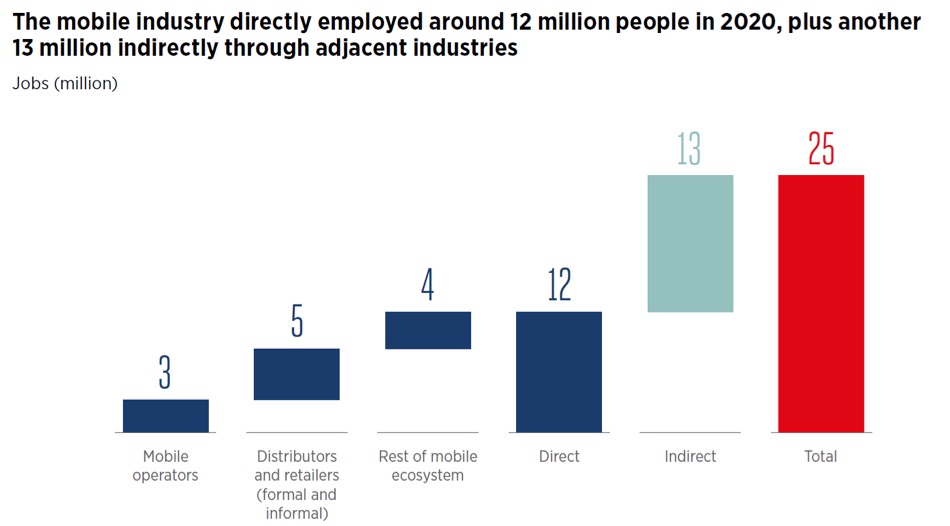 The GSMA report also highlights, along with much other data, the crucial importance that 5G networks will represent over the next decade for the global economy as a whole. However, a careful examination of all the figures in the report makes it clear that in the past decade there has already been exceptional growth in the world economy thanks to the mobile ecosystem and, in particular, the deployment of 4G networks over the last ten years.

Furthermore, 4G networks will continue to add a lot of value to the world economy, especially in developing countries, because there is still a long way to go with 4G. 4G adoption will continue to grow until 2023, which will be when it will peak, with 60% of global subscriptions, and thereafter 5G will begin an accelerated take-off, as highlighted in last week’s analysis, too. based on the GSMA report.

It is profitable to extend the 5G network, Huawei argues

Everything indicates that 5G will contribute decisively to the growth of the world economy, but it is not clear that it does so as intensively as 4G did, in part because it came from a relatively low impact of telecommunications on the economy, which flourished with 4G multiple services that were highly valued by consumers and businesses. Now, with 5G, because it impacts many more sectors of the world economy, its contribution will surely be much higher, but it will require an additional effort in investment and innovation for new applications to bear fruit and consolidate.

The new applications that are easier to implement and that give better results faster have already been made. Many of them, obviously, can be greatly improved and others can only be done with 5G, thanks to the faster response, the low latency, although it will start from land already partially exploited. It will be necessary, for 5G to bear fruit worldwide, to make a large investment in 5G networks and have a wide coverage, even before finding an economic model that makes them totally profitable. 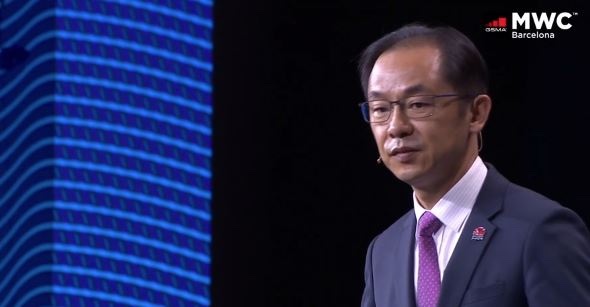 This is what is already being done in China and South Korea, said Ryan Ding (in the image above), executive director of networks at Huawei, last week at the MWC, in a long presentation entitled “Innovation: Lighting up the Future ”. China, and also South Korea, are already reaping the first fruits of their big bet to quickly cover large parts of their countries with 5G networks. If a large return on investment is expected to extend the coverage of 5G networks, it may take too long to achieve this. So it was Ding’s underlying message, you have to invest and innovate very decisively in 5G without delay.

The Huawei executive showed some data (lower graph) that reveal that 5G is already being a great catalyst for the economy of China and South Korea. The rollout of 5G is being twenty times faster than 4G, thanks to record investments from China and South Korea. In China, Huawei calculates, there are 820,000 5G base stations already installed and in South Korea another 360,000, out of a total of about 1.2 million worldwide.

In terms of the number of 5G users, the ratio in China to the number of base stations is much higher than in South Korea. In China, as shown by the data presented by Huawei and reflected in the graph below, there are now more than 390 million users and in South Korea more than 14.5 million, compared to the world total that exceeds 480 million 5G users.

It is clear that the concept of “5G users” is also very diffuse, because they can be users who have a 5G smartphone but do not use it or who do not have service in their range of action, or who do not have a 5G smartphone but yes access to a 5G network. The use by these 480 million 5G users that is estimated to be there now is very varied, from those who use it extensively to those who use them moderately, through those who have not activated it yet but who are registered as users.

The central part of Huawei’s top graphic gives a hint. In China, it is read, the growth in the turnover of the operators in the last year has been 6.5% while in South Korea 4.8%. The growth of profitability in the last year of the Chinese operators has been 5.6% while that of the Korean operators has risen to 22.4%. South Korea, therefore, has invested much more than China in 5G networks in relation to its current users, but the extension of the 5G network has also been much more profitable.

These are data that probably require great caution when analyzing them, because the situation of 5G networks in South Korea and China and their great support from the state and from their national operators is not the same, far from it, of the that exists in Western Europe, neither in the United States nor in Japan. But there is an irrefutable reality: for users (consumers and companies) to start using 5G services en masse, it is necessary to have a solid and widely implemented 5G network, with coverage in large areas and especially in those with the highest potential traffic.

This 5G network, in addition, must provide speeds much faster than with 4G, on the order of 600 megabits per second or more, compared to the typical 100 megabits per second of 4G. Which leads, inexorably, to the fact that the 5G network should very preferably use the 3.5 GHz band and be completely 5G. That is, it is based on the SA-5G standard and not the 4G-5G hybrid of NSA-5G. The problem, logically, is that the investment in the new 5G networks has to be amortized in a relatively short period of time, because the operators, at least the western ones, are due to their investors and the numbers have to add up.

The basis of the entire deployment of the 5G network that is being promoted around the world is that 5G will be a key driver of the entire global economy and the countries that will benefit the most from it will be the ones that bet the most and make a big difference the fastest. deployment of 5G networks. And this is not only said by Huawei through its network manager, but by the Mobile Economy report of the GSMA, the association that brings together the vast majority of operators around the world.

Network equipment manufacturers, such as Huawei but also Ericsson or Nokia, will say anything to sell more. But if the operators, who are the customers of the equipment manufacturers, also say so, it is fair to assume that it is true that “5G is being a key driver of the economy”, as stated in the title of the first graph presented by Ding at the MWC . Ding said many other things, as did Shin Soo-Jung, head of the group of companies of Korea Telecom (KT), one of the three major operators in South Korea, in the framework of the GTI Summit that took place at the MWC, that will be exposed in a later article.