In Ericsson’s mobility report, presented last week, it is now calculated that at the end of 2020 there were 161 million 5G subscriptions and 550 million at the end of 2021, when in the June report of last year, which follows the same methodology for twelve years, they were estimated at 220 million and 660 million, respectively. By the end of this year, Ericsson estimates that 5G subscriptions could exceed 1 billion, although the invasion of Ukraine and the fall in global smartphone sales may not even reach this figure. In fact, the market situation has already caused Ericsson to reduce the 5G subscriptions initially planned for the end of the year by 100 million and could be more, depending on the evolution in the second half of the year.

The downward revision in the last two years has taken place, according to Richard Müller, senior market analyst at Ericsson, because what China called “5G subscription bundles” was previously included as 5G subscriptions, a somewhat confusing term, because does not necessarily imply that there are necessarily connected 5G smartphones, but the possibility of access to 5G networks. Now, Ericsson counts as 5G the subscriptions that have a compatible terminal in China (it is unknown if the company makes the same distinction in other markets; many operators, such as Vodafone in Spain, give access to 5G networks to their customers with unlimited data, have or no compatible 5G terminal, and it is not clear how they are counted if there is no 5G terminal because no data is given).

Of the 550 million 5G subscriptions at the end of last year, China has a total of 357 million, 65% of the world total. And if the region that Ericsson describes as Northeast Asia is included, 410 million 5G subscriptions are reached, 75% of the world total. In Europe and North America, the total number of 5G subscriptions is 112 million (31 million in Western Europe, 79 million in North America and two million in Central and Eastern Europe), 20% of the world total, always according to data from the Ericsson mobility report, which can be seen in the tables below. It is understood, therefore, that a variation in China’s calculation system for 5G subscriptions is of great importance, while in Europe it may be a matter of tenths. Nor does Ericsson make a distinction between real 5G networks, those that work in Europe and the United States above at least 2.5 GHz, and those that go at a low frequency and speed comparable to 4G.

This revision of 5G subscriptions in China has caused LTE subscriptions to increase at the end of 2020 and 2021, which are now estimated to be 4.7 billion and 4.91 billion, respectively, when before the end of 2020 they were estimated at 4.61 billion, 90 million less. What is beyond doubt is the crucial importance of the Asian market in mobile phone subscriptions, be it 4G or 5G, and particularly in China. In the next few years, the biggest takeoff of the mobile market will take place in India, since it concentrates nearly 20% of the entire world population, as is also the case in China. 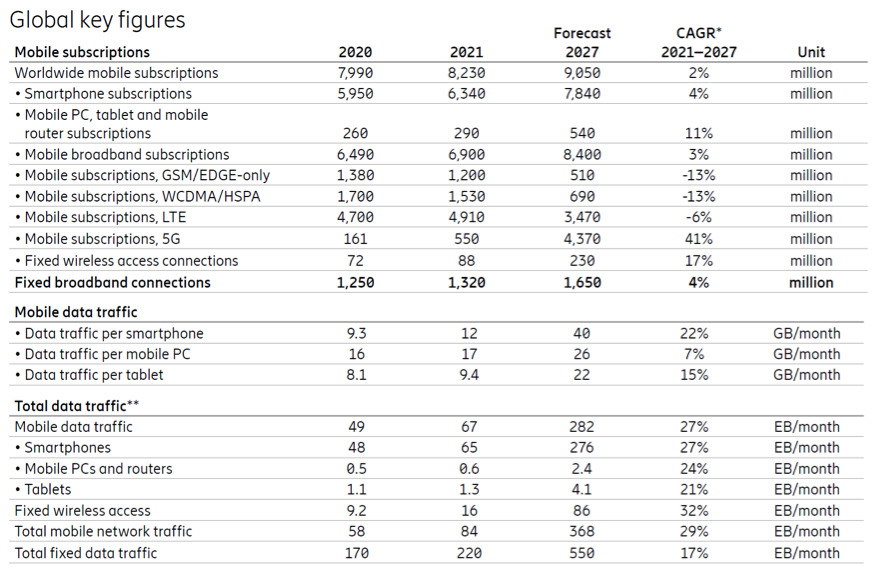 For the next six years, until 2027, which is the forecast reached by the Ericsson report, mobile subscriptions will grow very moderately, 2% per year, to 9,050 million, and smartphone subscriptions double, 4% per year . 5G subscriptions are, by far, the one that will grow the most, 41%, going from 550 million at the end of 2021 to 4,370 million at the end of 2027. Throughout this year, as has already been said, almost it will double the number of 5G subscriptions and next year and 2024 there will be another important jump in relation to 5G. LTE subscriptions will continue to grow this year and probably next year, as many of the current 2G and 3G connections will migrate to 4G (and many 4G to 5G, because there is hardly any population left to have a mobile).

As seen in the graph below, the rise of 5G subscriptions in the world (in orange) will be very high, reaching 4.4 billion in 2027, according to Ericsson calculations. 4G (or LTE) subscriptions will remain very high in the next six years, about 3.5 billion in round numbers. 2G and 3G networks will become relatively marginal by the end of the decade, around 1.2 billion (13% of the 9.1 billion mobile subscriptions expected in 2027).

For the next few years, the percentage of 5G subscriptions will be very high in North America, Western Europe, Persian Gulf countries and Northeast Asia, between 74 and 90% of the total. Ericsson estimates that there will be 400 million 5G subscriptions in 2027 in North America, up from 79 million last year, an annual increase of 31%. In Western Europe, growth will be much higher, from 31 million last year to 440 million forecast for 2027, with annual growth of 56%. In China, it will go from 357 million last year to 1.41 billion in 2027, an annual increase of 26%.

If these forecasts by Ericsson are fulfilled by the end of 2027, China would have a slightly higher number of 5G subscriptions than all of Europe and North and South America combined (1.41 billion vs. 1.3 billion). The almost 300 million 5G subscriptions that Japan and South Korea may have could be added to the block of Europe and America to displace China. But in Southeast Asia there will be more than 1,000 million 5G subscriptions in 2027, almost as many as in all of Europe and North America combined, so the preponderance of Asia in the mobile market, even leaving aside Japan and South Korea, is incontestable, look where you look.

China had 357 million 5G connections at the end of 2021, compared to 31 million in all of Western Europe or 79 million in North America, a difference that demographics make impossible to recover.

Demographics mean that the Asian mobile telecommunications market will continue to be key in the coming years, and especially the Chinese one. This has profound consequences for telecommunications equipment manufacturers. If the United States and allied countries continue to veto Chinese manufacturers (Huawei and ZTE, especially), the other major equipment manufacturers (Nokia, Ericsson, Samsung, and some from Japan, notably NTT DoCoMo) will have access to at most the half of the world market, because it is foreseeable that China will not let them enter its market either and will exercise great influence in its neighboring countries (India is likely to cultivate its own industry). The industrial policy that the European Union maintains with China will also greatly influence the future of Ericsson and Nokia in Asian telecommunications. Nor can we forget the sub-Saharan mobile telecommunications market, to which China pays a lot of attention, because it will be the one that grows the most, 8% per year, until 2027.

The growth of mobile phone network traffic has slowed in recent years, going from fluctuating between 50 and 80% between 2015 and 2020 (see graph below) to around 40% per year as of 2020. An annual growth of 40% is, however, an abysmal figure and, although it will inevitably decrease in the coming years, it will continue to be very high. As seen in the graph below, it will go from about 120 exabytes per month this year to more than 350 exabytes per month in 2027, three times more on a volume of data that is difficult to imagine.

During the next two years, most of this mobile traffic will be supported by the current 4G networks, but from next year the 5G networks will take over and in 2025 the traffic of 4G and 5G will be similar in volume and in 2027 the 5G already majority. The investments that telecommunications operators will have to make in the coming years will have to be enormous to support and manage this growing volume of mobile traffic. As much as 5G networks are more efficient than 4G from the point of view of electricity consumption, the challenge for operators to control it is colossal, apart from keeping financial costs under control and user rates affordable. . 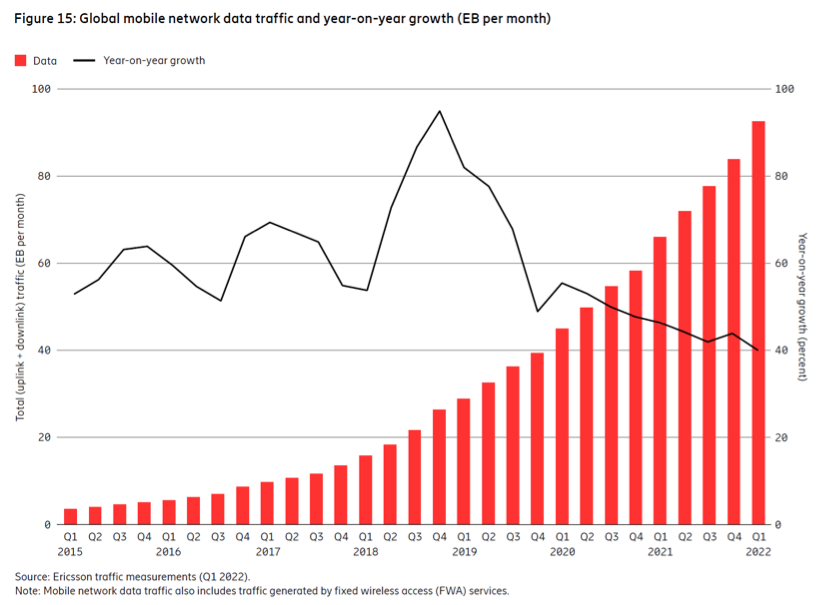 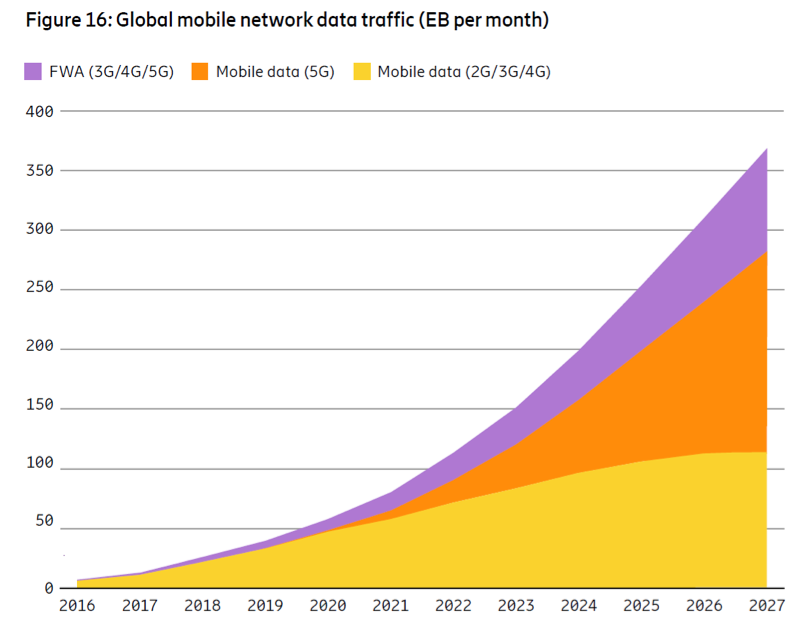 Fixed-mobile technology on the rise

Ericsson’s mobility report highlights the importance that FWA, fixed wireless access, technology will have in the future, although its growth will be moderate and will depend for many years on 4G technology. As seen in the global figures in the table above, at the end of 2020 there were 72 million connections, which increased to 88 million at the end of 2021. By the end of 2027, it is estimated that there will be 230 million, with one of the highest annual growth, 17%, only surpassed by 5G subscriptions. 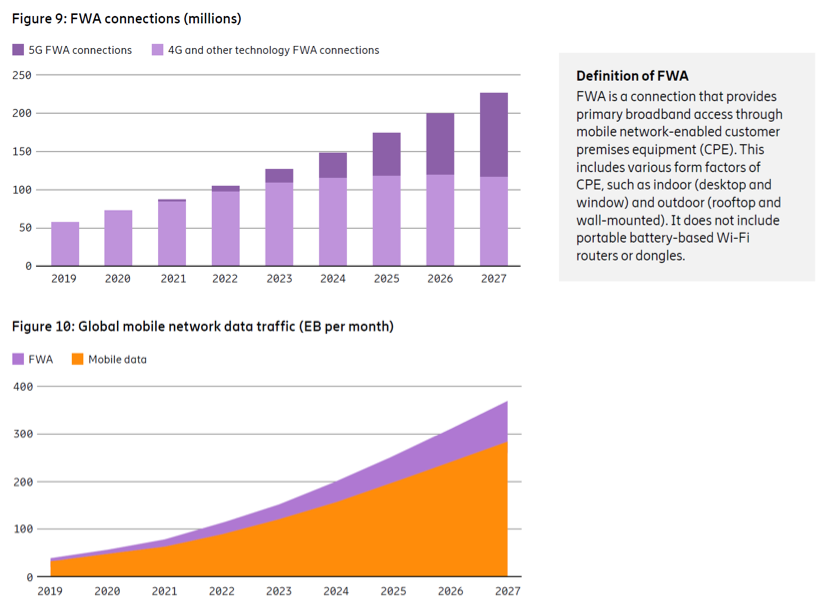 In the two tables above, the boom that mobile broadband connections captured through a fixed terminal, fixed-mobile access or FWA, will have in the coming years is clear. But here it is also necessary to relativize growth, because it will not be until 2024 when FWA takes off through 5G connections. And it is that 4G technology has been deployed so massively during the last ten years throughout the world and users are so satisfied with their current 4G terminals that it is difficult for the substitution of 4G terminals to 5G to be as fast as it had to be. 3G to 4G.

The reduction in sales in the last two months of 5G smartphones in China may be due, in large part, to the effect of confinement and the zero Covid policy, but it is feared that in this semester that is now beginning, the sluggishness in the sales of 5G smartphones, not only in China but also in Europe, despite the fact that the prices of the devices are contained. It is said that Samsung has in its warehouses 50 million 5G smartphones from its mid-range A, with a very good price-performance ratio. The supply problems that afflict the entire electronics industry do not justify, on the contrary, that the channel is full of products and the big smartphone manufacturers have canceled some orders for this second half.

Ericsson’s annual mobility report, with regular updates, continues to be among the most reliable for forecasting the future of the mobile phone industry five or six years ahead. Despite the fact that, like all reports, it has its limitations and this year some assumptions have had to be revised downwards. A few days before Ericsson, the consulting firm CCS Insight presented a similar report, much more optimistic than Ericsson’s. 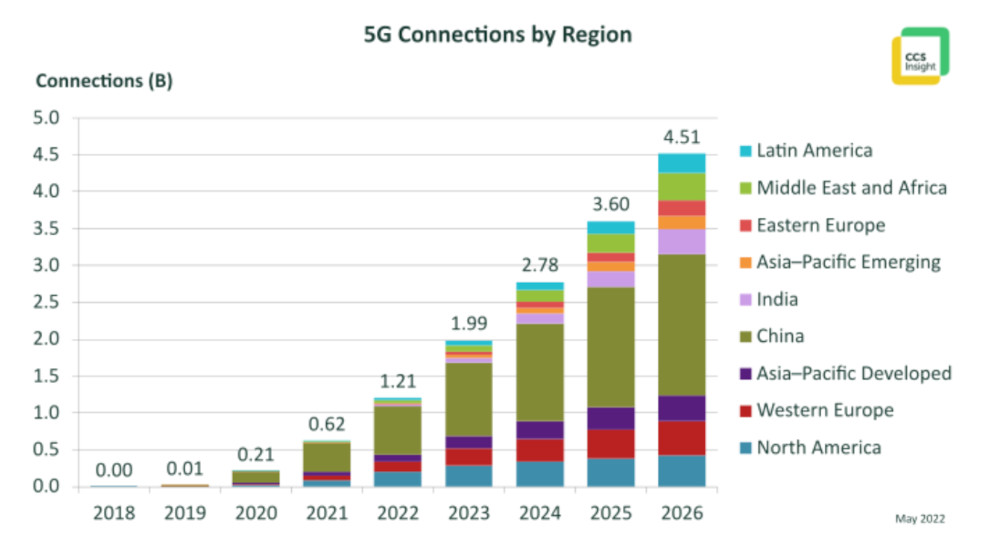 As seen in the chart above, CCS Insight estimates that 5G connections worldwide will double this year, from 620 million last year (vs. 550 million now estimated by Ericsson) to 1.21 billion by the end of this year. year and 2,000 million next year. In about a year it will be seen which of the estimates is more accurate by the end of 2022, if Ericsson’s bordering on 1,000 million 5G connections or CCS Insight’s with 1,200 million. In any case, getting the forecasts right is now much more difficult, especially in the short and medium term, with all the current macroeconomic and geostrategic uncertainties.