Facilitating the deployment of 5G networks in Spain becomes a fundamental task, because it opens great possibilities for economic and social development in our country, by going beyond technology, Roberto Sánchez, Secretary General of Telecommunications for Digital Infrastructures, highlighted today. , during the II National 5G Forum, under the generic title of Move ON5G and broadcast in streaming. 5G is a reality in Spain and now is the time to act, due to the economic opportunity and the boost it offers to the productive sectors, added Federico Ruíz, head of the 5G National Observatory.

The promotion of 5G in Spain is highly strategic. First, because of the double bias of the transversal impact of 5G on society and on economic reactivation and, second, because it shows the usefulness of 5G in important services to develop our state of well-being, such as, for example, in the field of health, Roberto Sánchez has assured.

The creation of 5G services and infrastructures goes beyond a simple technological evolution. “5G opens up great possibilities for the digital transformation of the productive fabric, the innovation of production models, the change in the relationships of global production chains or the development of greater interactivity between people and objects, supported by an IoT platform” .

There is a Digital Agenda, the 5G Plan and European funds for economic recovery and social transformation, but it will require public-private collaboration, unity of action and dialogue and loyal cooperation between all the agents involved.

For this reason, the Secretary General for Telecommunications has added, “facilitating the deployment of 5G becomes a fundamental task for the economic development and digital transformation of Spain.” And more in these times of pandemic. The transition to 5G is already underway: in June of this year, according to the latest evaluation of the EU 5G Observatory, Spain was already the second European country in number of 5G cities, with 30 cities enabled, only behind the United Kingdom, and that is growing very fast thanks to the deployments that the operators are announcing.

Spain, adds Roberto Sánchez, also leads the list of 5G pilot experiences, with 31 of the 235 pilot experiences across the EU. It has been possible thanks to the great public-private collaboration in the last two years in three areas: tender and award in July 2018 of the 3.5 GHz band and the release of the 700 MHz band that has just ended now and that will allow it to be auctioned for 5G in the first quarter of 2021; promotion and dissemination of 5G networks and services, thanks to the National 5G Observatory (ON5G) and the MWC, and, thirdly, promotion of 5G with the call for two waves of 5G pilot projects that encompass 150 use cases with more than 80 million euros in budget, managed by Red.es and co-financed by the European Regional Development Fund.

In addition, recalls the Secretary General of Telecommunications, “we have the advantage that the deployment of 5G is being supported by the extensive fiber optic network existing throughout the Spanish territory, which is essential to channel the large volumes of data that will be transmitted through 5G ”.

Much remains to be done, acknowledges Roberto Sánchez, but there is a Digital Agenda with the top priority, a 5G Plan to take advantage of opportunities and European funds that will serve as a lever for economic recovery and the transformation of our society. To be successful, he acknowledges, “public-private collaboration, unity of action, and dialogue and loyal cooperation between all the agents involved will be essential.”

The 5G Plan included in the Digital Agenda for the period 2020-25 will contribute to the economic reconstruction of Spain and will serve as one of the levers for the economic reactivation and with the driving capacity for the creation of employment and consumption. Following the Agenda, the 5G plan aims to “make Spain the highest quality 5G platform in Europe”, also actively collaborating with the plans of the European Commission to promote the participation of member states in the development of 6G , which should start now. 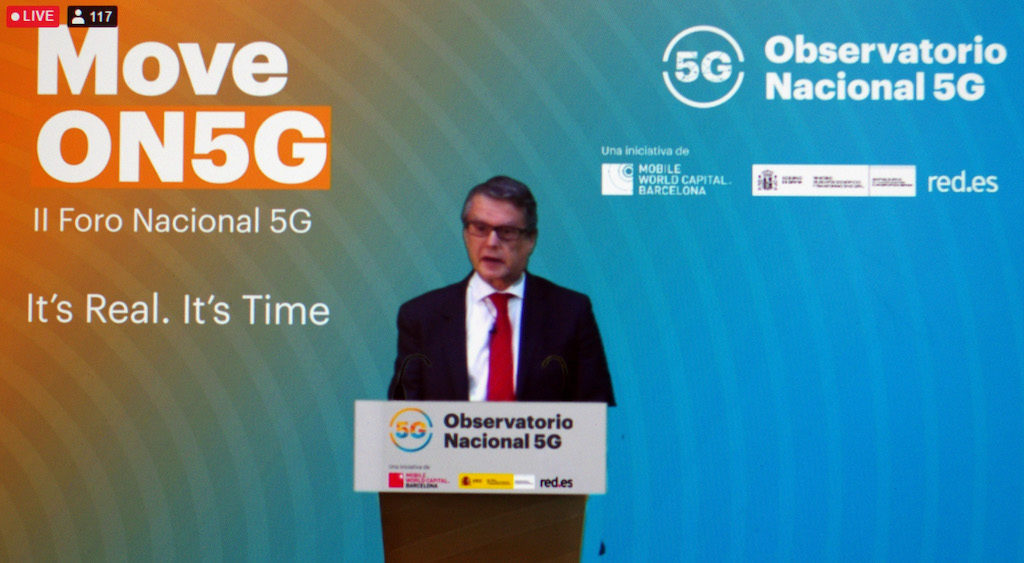 There are several specific objectives, summarized Roberto Sánchez: to reinforce Spain’s leadership position in the 5G field; make all the spectrum resources demanded available to the operators; guarantee a stable regulatory framework with legal certainty; promote an adequate and favorable investment climate for Spain; make an effort on network security, in accordance with the good European practices that Spain is developing; force early deployment of commercial 5G services and reinforce 5G investments with private initiative, which serve as a pull factor for new investments in infrastructure.

These objectives, he added, are in line with those committed by the Government in the 2025 Digital Agenda and in the recovery, transformation and resilience plan. Specifically, have the spectrum prepared for the radioelectric deployment for 5G, achieve 5G coverage of 75% of the Spanish population in 2025 in the priority bands and guarantee adequate connectivity and digital coverage throughout the population at 100 Mbit / s, reinforce the Spanish capacity in cybersecurity, bring forward projects of sectoral digital transformation, or improve the attractiveness of Spain as a European platform for European transit and link economy.

5G will touch all sectors and that we are all protagonists. There are many things that we do not know about 5G, which is where the profitability is. “Now is the time to make 5G a reality for everyone,” says the head of ON5G

The Agenda is intended to contribute to the relaunch of the country, mobilizing large public and private resources and ensuring that they are directed towards the sectors with the greatest potential for recovery in our economy and with better prospects for the future. The planned public investment is 20,000 million euros in the period 2020-22, of which 15,000 million correspond to new programs and financing instruments of the EU, specified the Secretary General for Telecommunications. To them, he added, would be added the estimated 50,000 million from the private sector in a scenario of moderate deployment.

“In total, we are talking about 70,000 million in the next two years; a real injection of money that will transform the economy ”. The plan is also supported by four main transversal objectives: digital transformation, ecological transition, social and territorial cohesion and the fight against the gender gap. There will be, he specified, up to 140,000 million euros, between transfers and credits in the next six years. And a third of this figure is destined to the digital field, in its most transversal aspect.

For Roberto Sánchez, it is a “very relevant magnitude, so we cannot miss this opportunity to promote the triple lever of reconstruction, transformation of the productive fabric and territorial structuring”.

The initial phase of the 5G deployment began a year ago and now, with the announcements of the four operators, the initial 5G deployment has been completed in Spain and there is a good supply of networks with initial equipment. But it is, as Federico Ruíz, head of the National 5G Observatory (ON5G) says, a first deployment, with NSA networks, and much remains to be done.

“We have quantified in ON5G the entities that lead 5G R&D projects in Spain and we have been astonished.” We are number two in Europe, which for Federico Ruíz is not at all anecdotal because it gives us a huge investment muscle and the trend is confirmed and widened. They are also pilot projects of a huge variety, led by Red.es but also co-financed by the Autonomous Communities and companies. “They are very interesting projects because they are an open window on what is to come.”

The important thing about these pilot projects, in the opinion of the head of ON5G, are their guts, which must mature in order to bear the desired fruit. “It is the hour, the time, the moment, to lead these projects and make them bear fruit together with other countries to achieve an economic return for citizens and for the industry.” 5G, he acknowledges, is a great economic opportunity, but also a social one. “It is the way to put our technological and non-technological industry in orbit with that of other neighboring countries.”

For Federico Ruíz, the great lesson of this year is that “the humble telephone is a huge digital transformation machine.” These are services that are covered from the bottom up, from health and telecare to tele-teaching, and that require as high a coverage as possible. For this, it is key to have good coverage, ubiquitous access. A year ago, he points out, there was talk of private networks, smart cities, mainly industrial uses. They were, in a certain way, specific uses, and now, partly due to the pandemic, the great importance that uses will have in the future for the citizen has been seen.

Now, he adds, it is the next phase, the deployment of the 5G SA network and the next generation of real digital transformation products and services. “Let’s take advantage, insists the head of ON5G, this leadership.” We have fiber, 4G and 5G, which gives us great freedom to see where we put our efforts and our investments. “The impressive thing, however, is in his view to come: eliminate the distance and have instant connection.”

It is about projecting services outward and bringing them closer to the citizen. But, he warns, “it will require a huge technological and social effort and there are many things that we do not know how to do yet.” Profitability lies in knowing how to do these things that we now do not know. We must also be honest with the development of 5G, because there are many things to do and many of them will be done over the next decade, with 6G.

We must also abandon the idea that the development of 5G should be done by the telecommunications sector. “It is something that we are all going to have to do”, because “it is going to touch all sectors and it is going to make us all protagonists”, insists Federico Ruíz. Now is the time to make 5G a reality for everyone, he concludes.