5G is the cornerstone for achieving a sustainable Spain, as stated in the title of a report published by DigitalES, the Spanish Association for Digitization. The report highlights the fundamental importance that 5G technology can have in achieving greater environmental sustainability in Spain in the coming years. 5G is seen in this way as the key to uniting the two main challenges that Spain has as a country: ensuring its economic and social development and reducing the carbon footprint of production processes and society. Digital technology, and especially 5G, can make a decisive contribution to achieving them, the report notes.

5G technology will contribute to carry out the two great transformations that Spain needs, the digital and the ecological, said Francisco J. García Vieira, director of Digital Public Services of Red.es, at the presentation of the report last Friday. “This will reduce the environmental footprint, despite the exponential increase in data traffic and connected devices.” 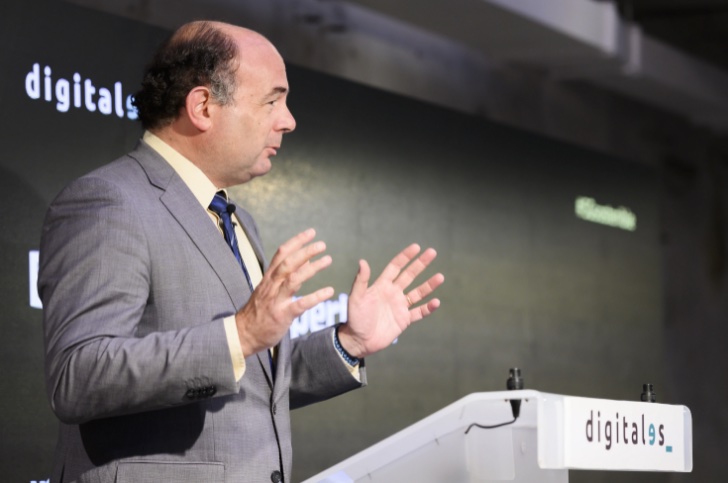 According to the manager of Red.es, the pilot projects promoted by this public company, through ERDF funds, confirm that the application of 5G in different sectors of activity reverts to energy efficiency gains and contributes to the decarbonization of the economy.

“5G technology will contribute to carry out the two great transformations that Spain needs, digital and ecological,” said Francisco J. García Vieira, director of Red.es, when presenting the report

“5G technology is strategic for Spanish competitiveness and the pilot experiences that are underway in Spain attest to improvements in the efficiency of processes,” says Víctor Calvo-Sotelo, Director General of DigitalES, in the foreword to the report that the Association has made on the great opportunity that the development of 5G networks can represent for Spain and presented last Thursday.

The pilot projects carried out so far on 5G technology confirm its positive effects in reducing polluting emissions and make us imagine a future in which everything around us will be connected. No one doubts, either, that this technology will bring with it very important economic advances, adds Calvo-sotelo.

The technical improvements associated with 5G connectivity maximize, according to the report, the potential of digitization, including energy efficiency, and allow confidence that these benefits will quickly offset the increase in energy consumption of the communications network.

The report is structured in four chapters. After highlighting the objective of the European Union to achieve carbon neutral emissions by 2050 and the opportunity that 5G represents in Spain, he addresses the commitment to sustainability made by the Spanish technology industry and its main objectives, and then narrates the effect 5G enabler in other economic sectors, with a selection of use cases in Spain. The report concludes with ten proposals to achieve a more sustainable Spain in the 5G era.

The report, in this way, raises proposals and examples to follow to make the most of the potential that the arrival of 5G technology will entail, by impacting across the entire productive economy. Thus, emphasizes the general director of DigitalES, “urban planning, mobility, cross-border communications, industrial strategy or electrical networks, to give just a few examples, will find a great ally in 5G”. 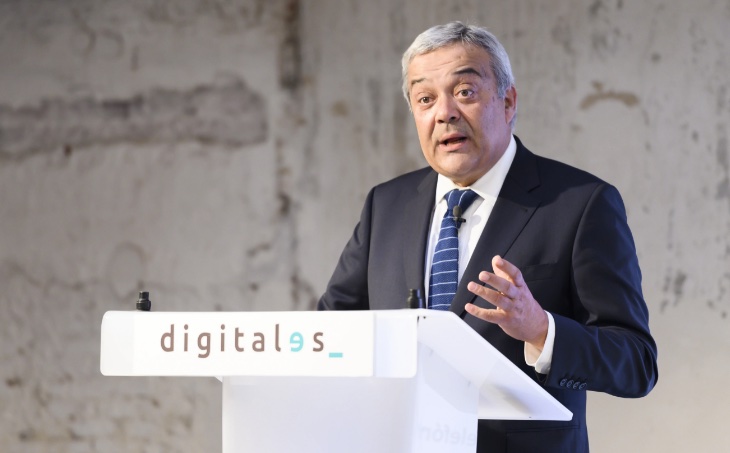 Víctor Calvo-Sotelo, in the presentation of the report.

The digital and ecological transitions are called to go hand in hand. But to achieve this, the report highlights, “it will be essential to strengthen dialogue between the technology industry and the rest of the economic sectors, including the public sector.” The next two years, like this, will be as demanding as they are exciting, because that is when 5G will be launched and results will begin to be seen.

Hand in hand with the Recovery, Transformation and Resilience Plan, Calvo-Sotelo points out, “we have a historic opportunity to consolidate our competitive advantages, wherever we have them, and to recover lost ground in so many other areas”.

5G technology itself is born being ‘green’. Data is available that, for every megabyte per second, 5G is up to 90% more energy efficient than 4G, the report says. Additionally, the industry of manufacturers, networks and providers of 5G solutions has demonstrated an absolute commitment to energy efficiency and the reduction of emissions, and have self-imposed sustainable goals that go beyond legal obligations, ”said Víctor Calvo-Sotelo, CEO of DigitalES, when presenting the report. 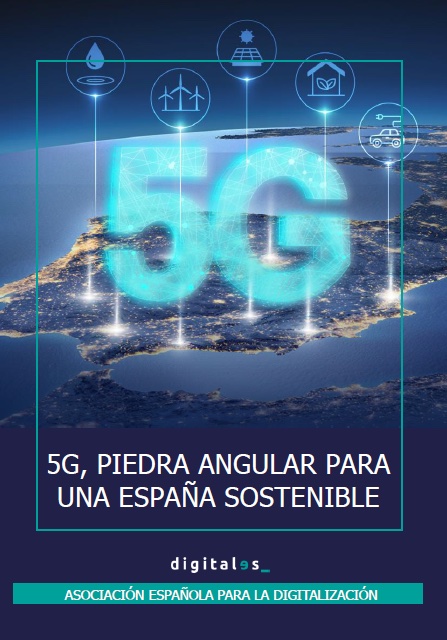 Technology is called upon to play a fundamental role in achieving sustainable goals. More broadly, digitization is an instrument that will help advance at least five of the 17 United Nations Sustainable Development Goals (SDGs). More specifically, “5G connectivity stands as the cornerstone of future sustainability,” the report highlights.

The significant improvement provided by the 5G environment opens up endless possibilities and the opportunity to develop innovative services. Relevant latency reduction facilitates a real-time connection, which will be key in the business, healthcare and industrial world. For example, the report says, reducing the response time of an autonomous vehicle will improve the safety of the occupants and pedestrians around it.

The report raises proposals and examples to follow to take advantage of the potential that the arrival of 5G will entail, by impacting across the entire Spanish productive economy

It will also be possible to perform remote-assisted surgical operations or coordinate work in agricultural fields through sensors installed at different points, allowing savings in costs, water and natural resources. Thanks to the upcoming deployments of 5G networks, solutions that protect our natural spaces and their invaluable biodiversity can be applied. 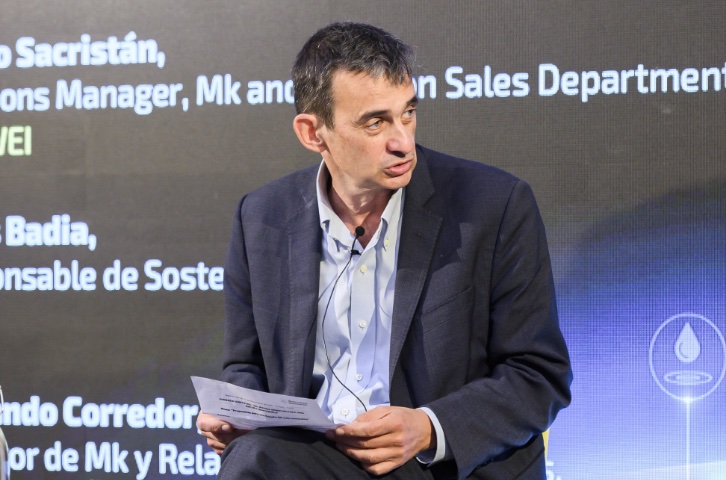 5G is, in itself, an exponential technology, a platform that enables technologies such as artificial intelligence (AI) and machine learning, the Internet of Things (IoT) or extended reality (XR). The uses of these innovations can help reduce costs, emissions, waste, energy consumption and, ultimately, make a decisive contribution to curbing climate change. Combined, these emerging technologies are going to radically change the world we know. And they will do it very quickly, says the report prepared by DigitalES.

In this context, the technology sector, and specifically the companies that deploy and develop 5G technology, play a fundamental role both as network operators, producers of equipment and applications to be used by other sectors, and because of the effort made by these companies in technological development and advancement, while maintaining a responsible business vision and sustainable development, summarizes the report in its introduction.

Ten proposals for a more sustainable Spain in the ‘5G era’

The report concludes with ten proposals to make Spain more sustainable in the “5G era”. Many of these proposals require, in order to be fully effective, the support of public administrations and adequate public funding, at least in the start-up, as well as, in some cases, a modification of regulations. Community Recovery Funds can be a great stimulus for the success of projects.

The first proposal is to “share cases of use of 5G technologies that demonstrate a positive environmental impact, as well as improvements in energy efficiency and reduction of business costs.” By sharing these successful use cases, other industries will be encouraged to develop their own sustainable technology projects, which has been the basic objective when preparing the report by DigitalEs’ sustainability line of work.

It is also proposed that the institutions support and support the shutdown of old networks, in parallel with the implementation of new ones, seeking to optimize efforts and reduce impacts, ensuring that measures are specified to avoid the economic impact on the companies affected. Alternatively – or in a complementary way – Recovery Funds can be used to support the transition to clean energy sources and techniques to reduce energy leaks that occur in existing infrastructures.

The third proposal is based on accepting the consideration of data centers as electro-intensive activity or other measures to support a sector called to play an essential role in the ‘5G era’. It is estimated that in 2025 23% of the energy consumption of a mobile network will be concentrated in data centers, since a good part of the traffic is channeled through these infrastructures in real time, which will skyrocket in the ‘5G era’. The commitment of the leaders of the data center sector is to achieve energy neutrality by 2030 but, to encourage these investments, the report urges its tax consideration in Spain as an electro-intensive activity.

Another proposal is to establish programs to promote the so-called “green algorithms”. As the Law on Climate Change and Energy Transition says in its article 5 bis, “to move towards a green economy, [it can be done], for example, through the design of energy efficient algorithms by design.” The business association report states that it is important to ensure programs that promote efficient energy with institutional support. 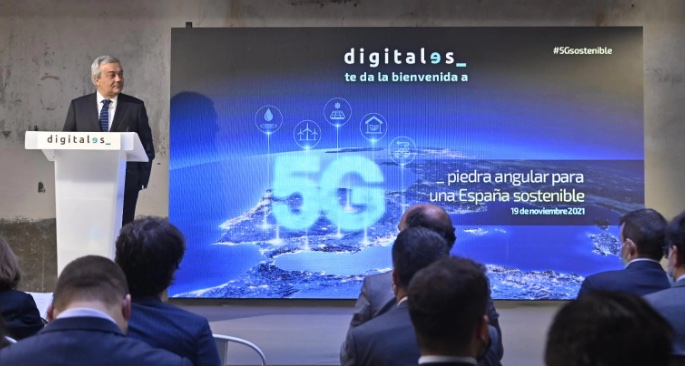 The fifth proposal talks about fiscally promoting, for business and industrial environments, the deployment of IoT systems based on 5G networks or the evolution of currently existing IoT systems towards 5G environments. The sixth proposal intends that public institutions promote aid and tax benefits in the introduction of 5G networks and infrastructures. It is special where the new networks can result in economic growth for the region, the creation of stable employment or the improvement of the environment, in order to accelerate the deployments and developments.

The seventh proposal wants to promote or facilitate, from local administrations, the deployment of small cells for the construction of true smart cities. It is recognized that, while these infrastructures will consume energy resources, in the end they will contribute to a more efficient management of urban resources, with a net positive impact. Including considerations about the potential positive environmental effect of 5G – and technological innovation in a broad sense – in all current and future strategic or legislative policy initiatives is the eighth proposal.

Digitization, underlined in the ninth proposal, can have a positive impact on consumer habits to combat climate change. In any case, it is warned that awareness-raising and awareness-raising actions on caring for the environment will be necessary to underline the close link between digitization and sustainability, with special attention to 5G technology.

The last proposal deals with the need to establish objective mechanisms for measuring the impact of public policies, to contrast the progress made and its quantification. In a recent report, adds the DigtalES report, the Elcano Royal Institute proposes the creation of an “environmental barometer”, which could be managed by the National Observatory of Telecommunications and Information Society (ONTSI), dependent on Red.es