The deployment of commercial 5G networks has accelerated in the last two years in Europe, thanks to the availability of affordable terminals and the investments made by operators. European users, however, do not seem very enthusiastic about new mobile networks as they are already satisfied with 4G networks, which may pose a problem for achieving the ambitious goals of the Digital Decade program launched by the European Commission in 2021. A recent analysis of the European mobile economy by the GSMA ensures that “it is vital to create the right conditions for private investment in infrastructure, network modernization and digital innovation” and that “it is key to have a financially sustainable mobile sector for the distribution of innovative services and the deployment of new networks”.

By now, most European countries have rolled out commercial 5G networks and almost two-thirds of operators in the European Union have introduced 5G services, but the adoption of the new mobile phone technology in Europe still lags behind most countries. such as Japan, South Korea or the United States, as highlighted by the report The Mobile Economy Europe 2022,

Presented at the beginning of October by the GSMA, the association that includes the vast majority of mobile phone operators in the world.

According to the report, 108 mobile operators in 34 European markets had introduced commercial 5G services by the end of this June. Its adoption by European consumers is growing steadily and now reaches an average of 6% of Europe’s mobile customer base. Norway is the country that is adopting 5G the fastest (16% of users), followed by Switzerland (14%), Finland (13%), the UK (11%) and Germany (10%).

“To keep pace with other global markets, Europe needs to focus more on creating the right market conditions for investment in telecoms infrastructure,” says GSMA

The report does not give data from the rest of the European countries and the Spanish operators and public bodies are also reluctant to give figures on the reality of 5G in the country, but it can be assumed that in Spain it is around the European average of 6%. (especially since many Spanish customers with unlimited data contracts have 5G service by default, even if they do not use it or have a compatible terminal, which increases the number of 5G users despite not being compatible). 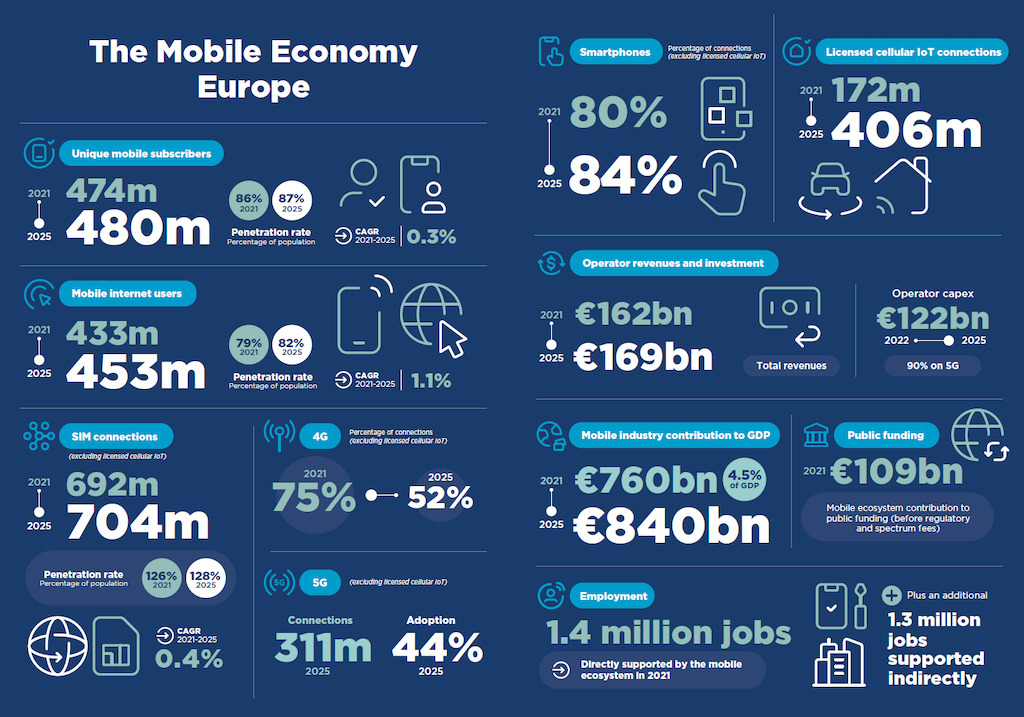 The European mobile phone market is highly saturated. GSMA calculates in the report that in 2021 there were 692 million SIM connections, which will rise to 704 million in 2025, which means that penetration was already 126% in 2021 and will predictably be 128% in 2025, with annual growth in these five years of only 0.4% on average. The boost to the mobile economy in the remainder of the five-year period will not, therefore, be due to the increase in mobile connections in Europe, but rather to the migration from the use of 4G networks to the new 5G networks that are being installed.

It is significant that in 2021 75% of mobile connections in Europe were already 4G, a figure that will drop to 52% in 2025. This is due to the boom in 5G connections expected in the coming years until 2025 and beyond. The report calculates 311 million 5G connections in Europe in 2025, with an adoption rate of 44%. The table below details that around 65 million 5G connections are expected in Europe by the end of this year, a figure that should gradually increase until the end of 2025, with the 311 million mentioned above. The adoption of 5G will be 20% by the end of 2023, by 2024 it will already be a third of the total and by the end of 2025 it will be 44%, always according to the future analysis of the GSMA. As the title of the graph below says, the adoption of mobile telephony will increase in the coming years in Europe, but slowly. 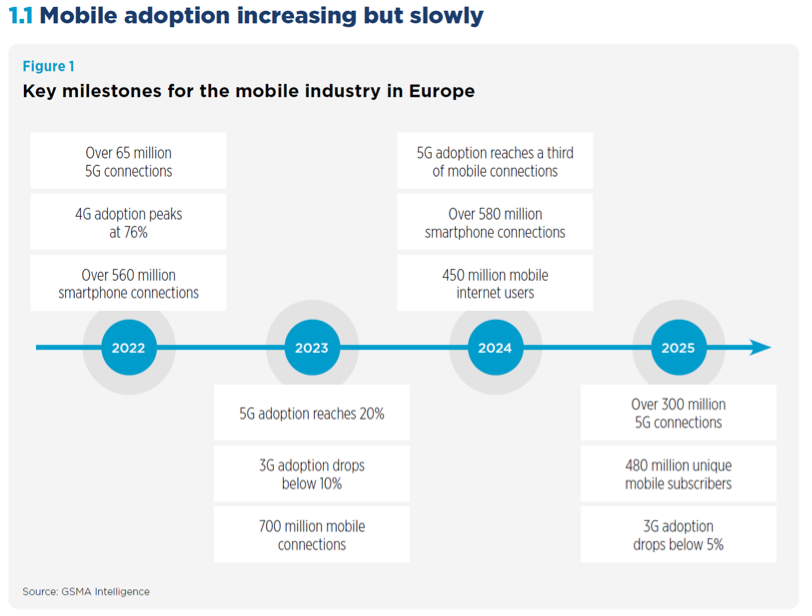 Another graph in the GSMA report shows the growth that 5G networks will experience until 2025 in the four main European markets by population and technological development: France, Germany, Italy and the United Kingdom. It is seen that 5G was very minority in 2021 in France, Germany or Italy (2%, 5% and 3%, respectively) but that it will be 47%, 59% or 38% in the three respective countries in 2025. In the United Kingdom, a higher base for 5G (7%) is expected in 2021 and it should reach 61% by the end of 2025, according to the calculations of the GSMA report, which can be considered good because The association has privileged information on the evolution of the mobile industry as it includes almost all the operators in the world. 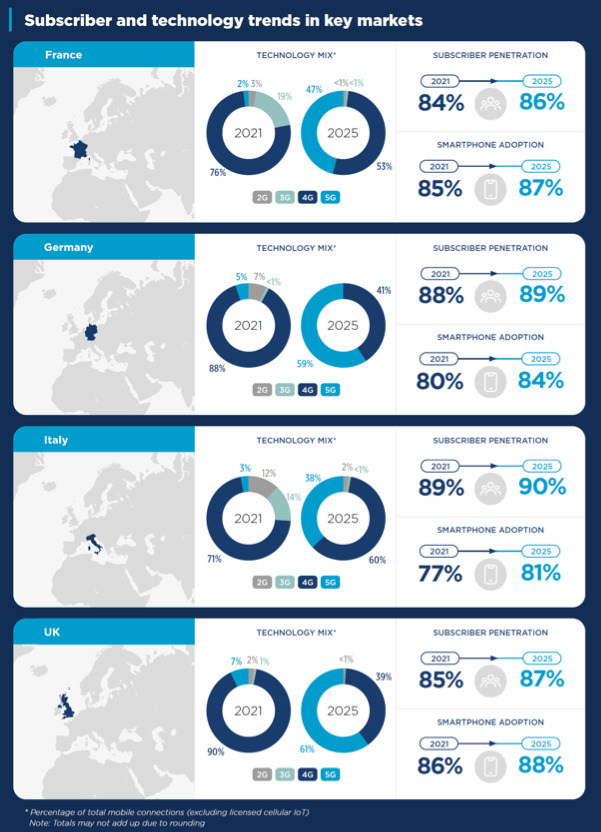 The problem, however, is not whether the availability of 5G technology will be more or less high in 2025 in Europe, but whether the take-off will be fast enough to achieve the ambitious goals set for 5G technology and the deployment of the fiber optics to the vast majority of homes. And, above all, if there will be a really effective use of 5G technology in Europe in the middle of this decade. Two years ago, in the European Union’s Digital Decade program, it was stated that “gigabit connectivity for everyone and 5G everywhere” was wanted by 2030, as the report recalls.

The tone of the GSMA European Mobile Economy report is bullish on 5G deployment, but points to serious investment imbalances to be made by operators

In fact, if the average adoption of 44% in 2025 for 5G throughout Europe forecast by the GSMA is taken for granted, it is seen that France exceeds it very slightly and Italy is well below the average in the four main countries detailed by the report. Only the UK and Germany far exceed the 5G adoption average. It is certain that other countries, especially the Nordic countries and Switzerland, will also do so, but its smaller user base in relation to other European countries, such as Poland or Spain itself, makes what the GSMA report says quite reasonable. : By the end of 2025, 56% of networks will be 4G and the remaining 44% 5G.

The GSMA report provides economic data and penetration of the mobile telephony sector in Europe, but also makes a political position. In the report’s release, Daniel Pataki, Vice President for Policy and Regulation and Head of GSMA for Europe, says that 5G adoption in Europe is happening faster than ever, “but to keep pace with other global markets, you need focus even more on creating the right market conditions for infrastructure investment.”

The GSMA highlights the rate of expansion of coverage as a “crucial factor”, stating that almost a third of the European population will not have access to 5G in 2025, compared to less than 2% in the United States and South Korea. Apart from creating in Europe the “appropriate conditions for investment in private infrastructure, network modernization and digital innovation”, the report calls for contributions to network costs by other stakeholders. “They should include the application of the principle of fair contribution to network costs,” emphasizes Pataki.

In the report, it is recognized that 5G will represent 44% of connections in Europe in 2025, compared to 25% of the world average. But, even so, the most important European markets in population, such as the United Kingdom, Germany and France, will be below the most advanced countries in this field, such as South Korea, the United States, Japan or Canada, as can be seen. in the lower graph. 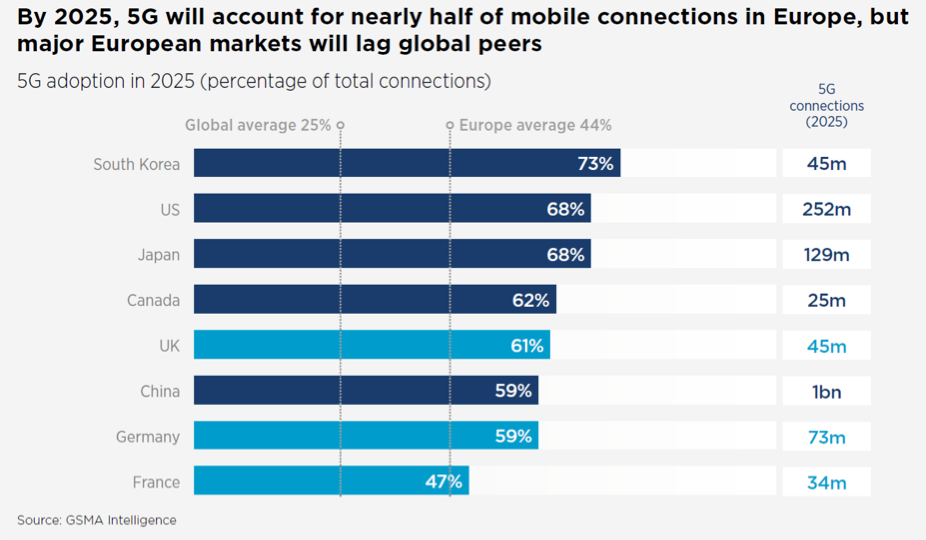 In any case, the upper graph is a bit biased, because it places South Korea at the head, which will indeed have the highest percentage of total connections, 73%, but with 45 million connections, a number equal to that of Germany. . China, on the other hand, will have a lower percentage than South Korea or the same as Germany, 59%, but on a basis of 1,000 million connections, four times more than the United States in 2025 and 22 times more than Germany or Korea. from the south. The GSMA report totally tiptoes around the state of the Chinese 5G market, with this single mention in the chart above.

The comparison of the reality of 5G in the different international markets is very complex, because several parameters must be taken into account, apart from the users, such as the total number of 5G base stations and their relationship with the population. In the quarterly report of the 5G Observatory of the European Commission , from last October, the table below compares 5G deployments this year in China, South Korea, Japan, the United States and the European Union. 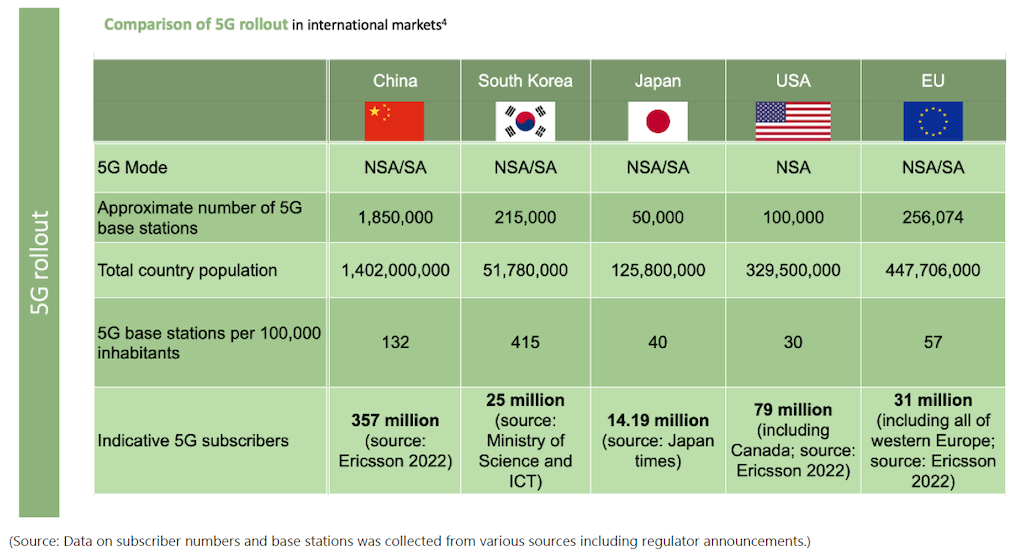 As seen in the graph, China’s current progress in 5G is abysmal compared to other markets, both in 5G users and in number of base stations. South Korea stands out for its great 5G coverage, with 415 base stations per 100,000 inhabitants. Thanks to the 215,000 5G base stations already installed, it is likely that the 25 million Korean users will not have many coverage problems, wherever they are in the Asian country.

By contrast, the United States now has 100,000 5G base stations, according to Ericsson estimates, or 30 base stations per 100,000 people. It is easy to deduce that the 79 million 5G users that Ericsson estimates to exist in the United States and Canada only have good coverage in the centers of the large agglomerations of the country. The question is the degree of coverage that the 252 million American and Canadian 5G users that the GSMA calculates for 2025 throughout the country will have.

The same GSMA study includes a graph from a 2021 GSMA Intelligence survey showing that European users are the most satisfied with the current 4G mobile network, ahead of the United States and Asia. Asian consumers, on the other hand, find the current network too expensive, much more so compared to Americans and especially Europeans. In contrast, few (27%) are enthusiastic about the benefits that 5G can bring when it becomes fully available, as seen in the graph below. 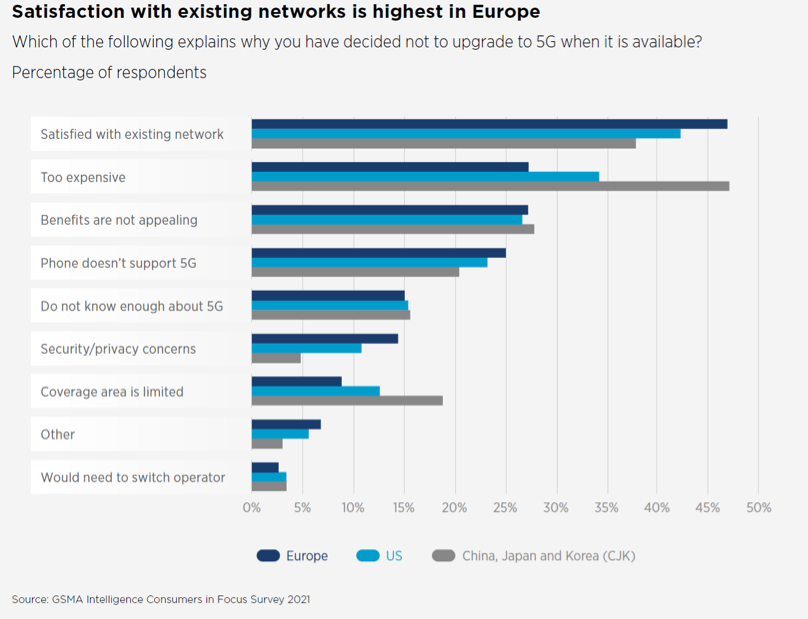 The problem facing Europe is thus twofold. On the one hand, it has the need to continue accelerating the availability of 5G infrastructures across the continent, but these infrastructures must be amortized in the near future, which means that they will have to be used more and the total billing of mobile networks must also grow, which which doesn’t seem to be the case.

The GSMA report outlines what 5G networks in Europe may look like in 2025, but also draws attention to the need to better finance mobile (and fixed) networks in Europe in this and the future. next five years. It seems that the report was carried out for the most part in June, but the situation of the sector and of the entire world economy has turned around in the third quarter and everything indicates that it will not improve in the coming quarters, with which the figures forecast for 2025 may be too optimistic.

In the next article, the proposals of European operators to improve the financing of their mobile infrastructures will be analyzed, an aspect that they consider essential for their forecasts to be fulfilled. Some proposals that, for now, do not seem to have the backing of the regulators, according to a preliminary legal report, nor of the European Commission, which is totally overwhelmed by the multitude of conflicts that have occurred in recent months.